Legion is based in the Pentesting Methodology that you can find in book.hacktricks.xyz.

Legion is a tool that uses several well-known opensource tools to automatically, semi-automatically or manually enumerate the most frequent found services running in machines that you could need to pentest.

Basically, the goal of Legion is to extract all the information that you can from each opened network service, so you don't have to write and execute the same commands in a terminal every time you find that service. Some actions are repeated by more than one tool, this is done to be sure that all the possible information is correctly extracted. 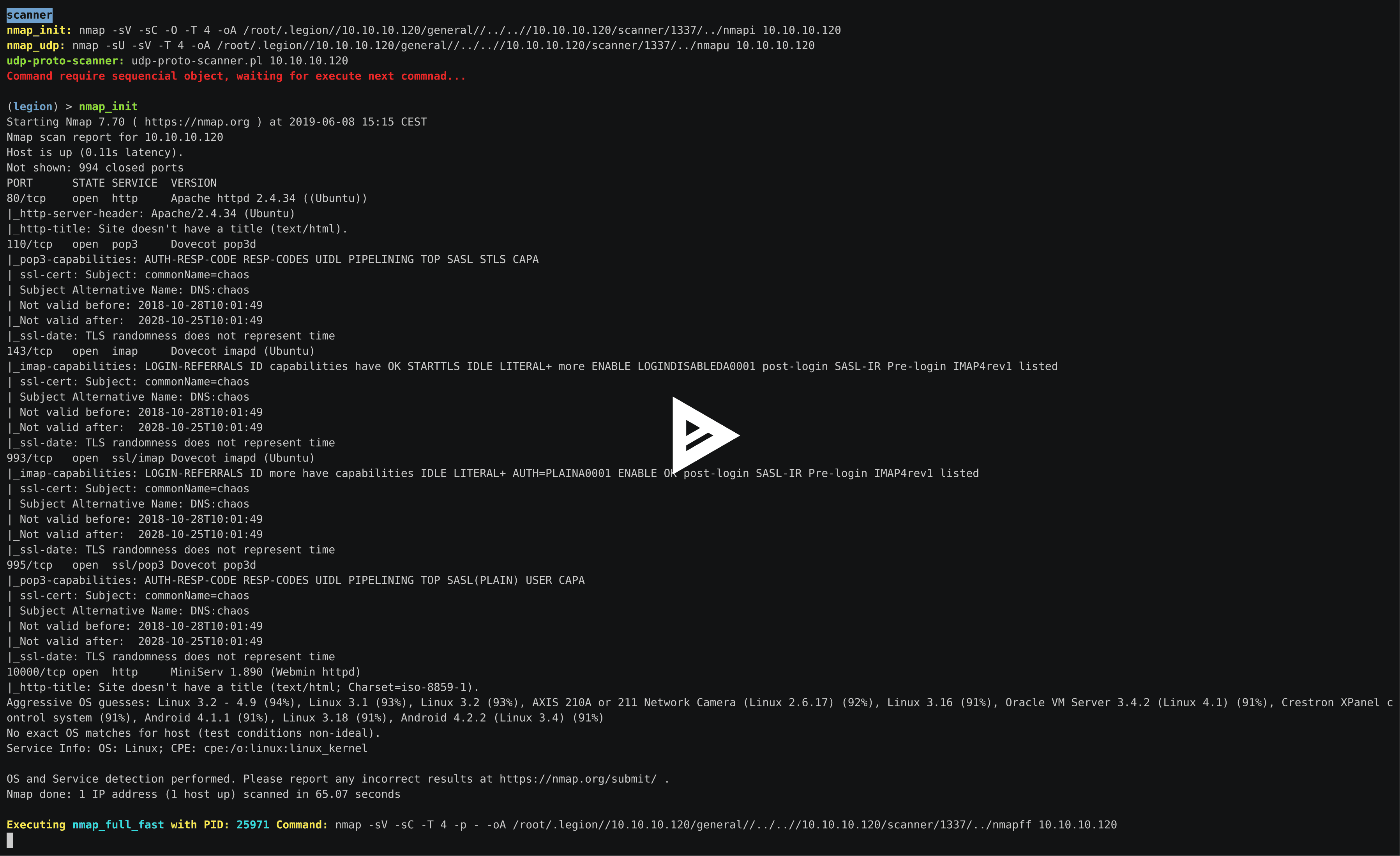 For pentesting oracle services you should install manually some dependencies: https://book.hacktricks.xyz/pentesting/1521-1522-1529-pentesting-oracle-listener/oracle-pentesting-requirements-installation

To have a nice experience with legion you can also build a container image using docker or podman, just typing the following commands:

And start the container:

You will have a ready-to-use legion container image (To execute legion inside the container run ./legion.py).

You can get a list using the command protos

Use the help internal command to get info about what each command does.

Just lauch the internal command startGeneral and the 'General' will start scanning ports and services automatically.

You can set all the options properly and launch several commands to scan one service. You can do this using the command run.

You can execute just one command using exec <name>. For example: exec http_slqmap

Some services have on demand commands, this commands can only be executed using this internal command (exec).

Ipv6 address of the victim, could be usefull for some commands

You can set a list (separated by commands) of commands that you don't want to use. For example, if you don't want modules from metasploit to be executed:set notuse msf.

Set here the password of the username you want to use.

The port where the service is running. If "0", then the default port of the service will be used (you can see this information using info)

It is the protocol that you want to attack

Set True if you want already executed commands to be executed again (by default is set to False).

Set the username of the user that you want to use/brute-force(by default to brute-force a list of users is used).

If True the output of the command will be displayed as soon as it ends. If False it won't.

If True the output of info will show where each parameter is used, for example:

If False the output of info will show the values of the parameters, for example:

Is the directory where the info of the victim is storaged. By default it is $HOME/.legion