This repository is part of a research outcome from the ASSET Research Group.

Follow the links on each vulnerability for more details and Espressif's patches.

While a custom version of hostapd is provided to test the first 2 vulnerabilities, for the last one, an ESP8266 is used to inject fake 802.11 beacon frames in order to crash others of its own (no pun intended!).

​ If for some reason the binary doesn't work with your system, you can compile the project hostapd-2.8_source by running the script ./buid.sh. The script installs the following dependencies before running the tool: build-essential pkg-config git libnl-genl-3-dev libssl-dev libnl-route-3-dev.

​ After the build is successful, you can run the script ./run_zero_pmk_EAP.sh to start the access point to test the vulnerability or ./run_hostapd_normal.sh to start without the test.

In order to compile the code for esp8266 in folder beacon_frame_crasher , it's necessary to follow the steps in ESP8266 Deauther. This is a modified version of the board support package for ESP8266 that allows the injection of raw 802.11 frames. A binary is also provided for a quick test in beacon_frame_crasher/ESP8266Crasher.ino.d1_mini.bin in case you have a spare wemos d1 mini board. Note that this code is hardcoded to crash an ESP8266 configured for an access point with a ssid=TEST_KRA. As soon as the "beacon frame crasher" device starts, the other ESP8266 devices connected to the access point should restart intermittently.

Alternatively, if your Wi-Fi hardware supports monitoring and injection, you can run the python script:

If your ESP device SDK is vulnerable to CVE-2019-12587, you should receive an output like this from hostapd:

If your ESP device SDK is vulnerable to CVE-2019-12586, you should receive an output like this from hostapd: 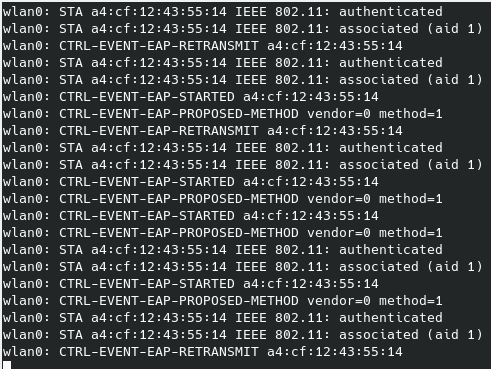 In this case, as the device is restarting every time it attempts a connection with hostapd, you should receive a lot of logs indicating re-connection. If you're monitoring the device serial port, you can also receive trace logs.

By default the PoC access point has the following default configuration:

To change this options, change the file hostapd.conf in the root folder of hostapd (hostapd-2.8_binary/hostapd.conf or hostapd-2.8_source/hostapd/hostapd.conf). Please change the interface parameter to match your Wi-Fi NIC, it's advised to leave other parameters as the default if you wish to test the ESP32/8266 client test codes. Correct certificates are also included (same from ESP-IDF repository), so no need to change them in hostapd folder.

If you wish to change EAP methods or username credentials, just change hostapd.eap_user

Check if you your openssl library allows to use TLS version of 1.0. You can change this configuration normally in /etc/ssl/openssl.cnf, Changing the last lines to:

The codes used for testing the vulnerable devices is in folder esp_client_test_codes.

This research was partially supported by Keysight Technologies.