A cookiecutter template for bootstrapping a FastAPI and React project using a modern stack.

It is often laborsome to start a new project. 90% of the time you have to decide how to handle authentication, reverse proxies, docker containers, testing, server-side validation, linting, etc. before you can even get started.

FastAPI-React serves to streamline and give you that functionality out of the box.

It is meant as a lightweight/React alternative to FastAPI's official fullstack project. If you want a more comprehensive project in Vue, I would suggest you start there. A lot of the backend code is taken from that project or the FastAPI official docs.

First, install cookiecutter if you don't already have it:

Second, install docker-compose if you don't already have it:

Then, in the directory you want your project to live:

You will need to put in a few variables and it will create a project directory (called whatever you set for project_slug).

Change into your project directory and run:

This will build and run the docker containers, run the alembic migrations, and load the initial data (a test user).

It may take a while to build the first time it's run since it needs to fetch all the docker images.

Once you've built the images once, you can simply use regular docker-compose commands to manage your development environment, for example to start your containers:

Once this finishes you can navigate to the port set during setup (default is localhost:8000), you should see the slightly modified create-react-app page: 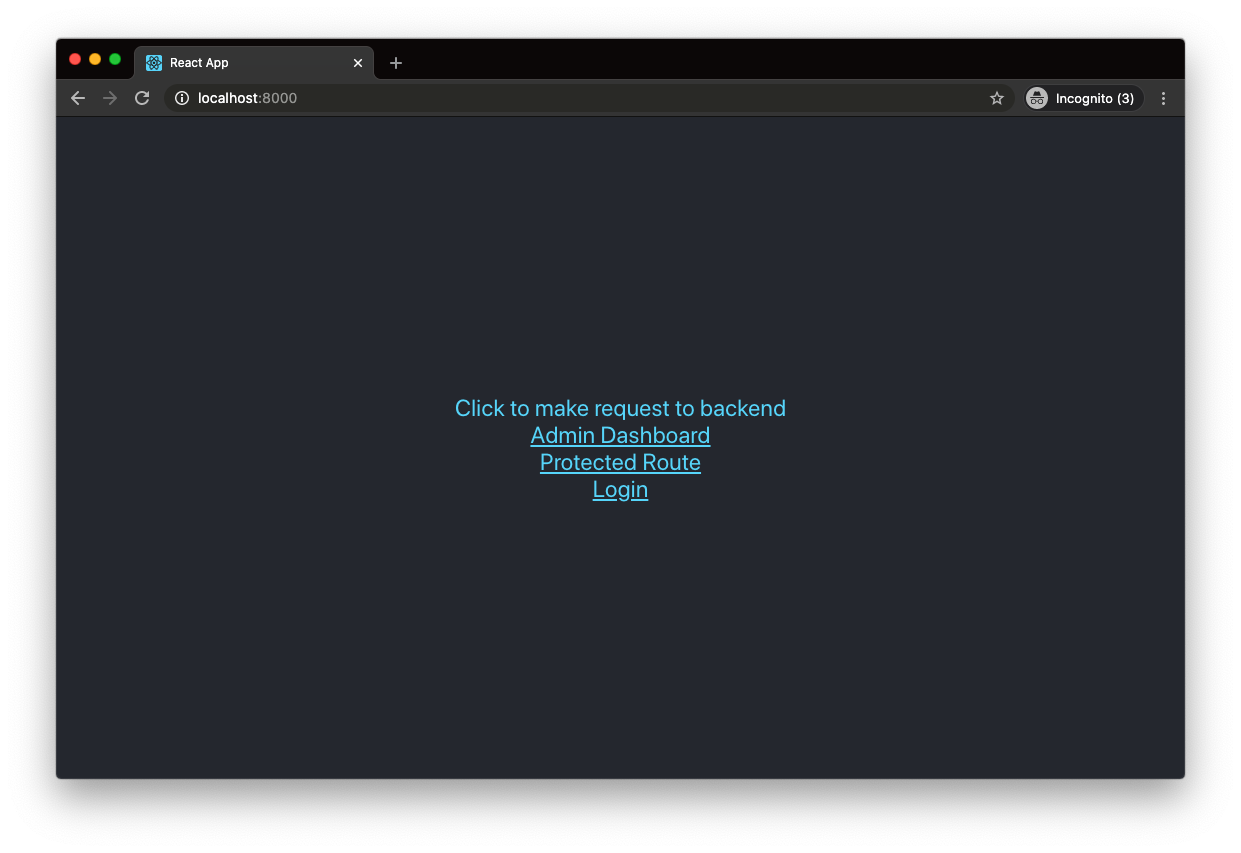 Note: If you see an Nginx error at first with a 502: Bad Gateway page, you may have to wait for webpack to build the development server (the nginx container builds much more quickly). 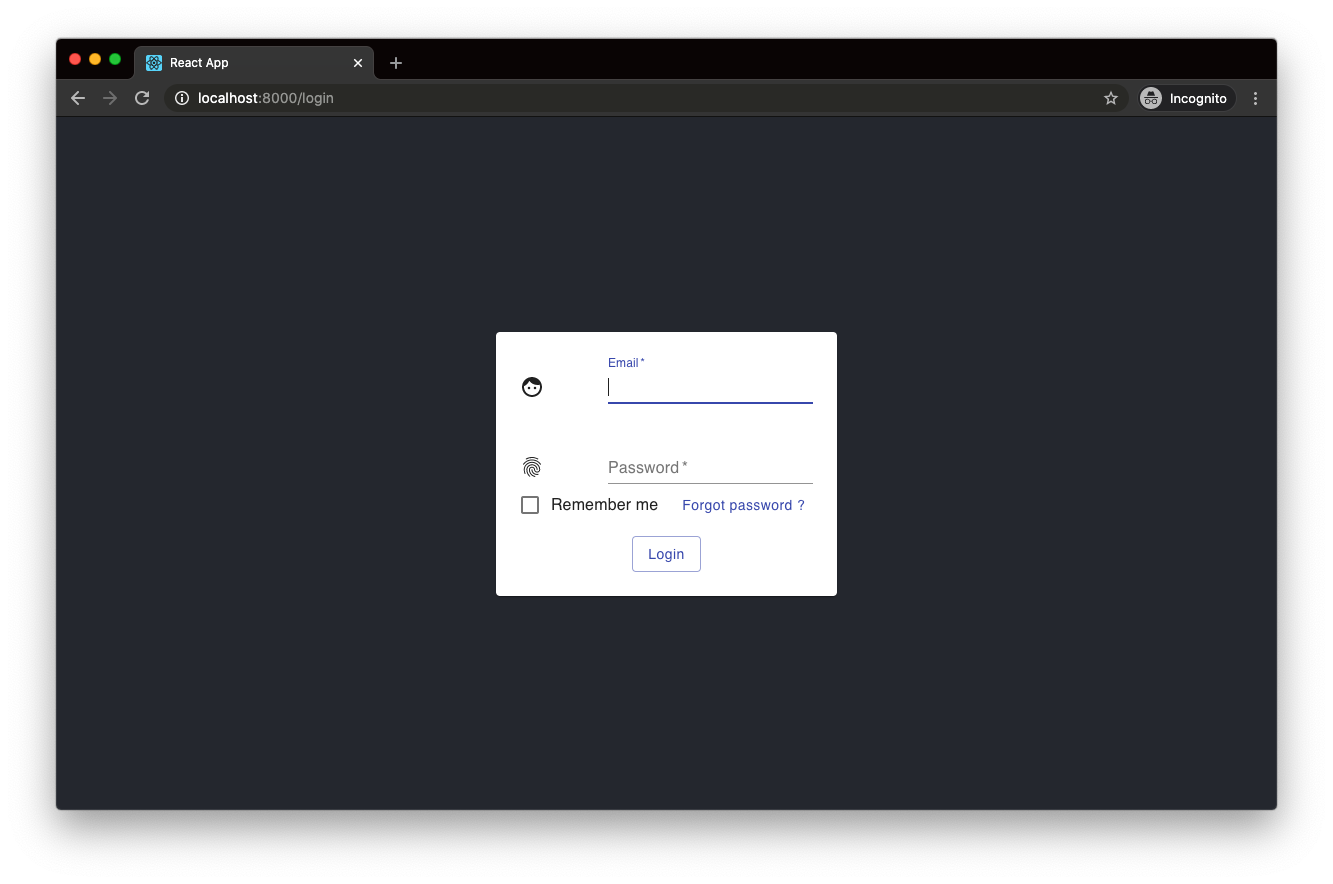 The backend docs will be at http://localhost:8000/api/docs. 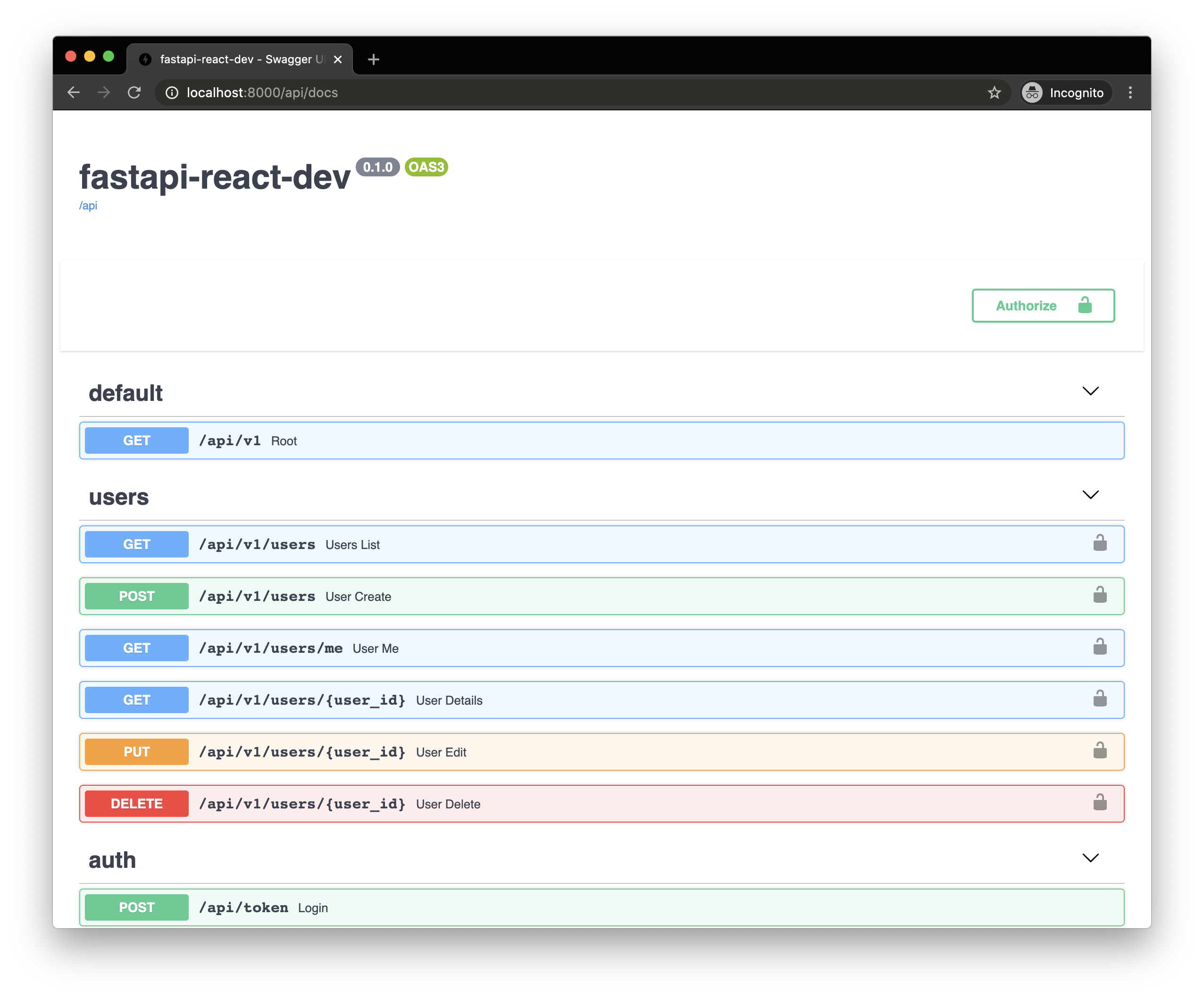 This project uses react-admin for a highly configurable admin dashboard.

After starting the project, navigate to http://localhost:8000/admin. You should see a login screen. Use the username/password you set for the superuser on project setup.

NOTE: regular users will not be able to access the admin dashboard 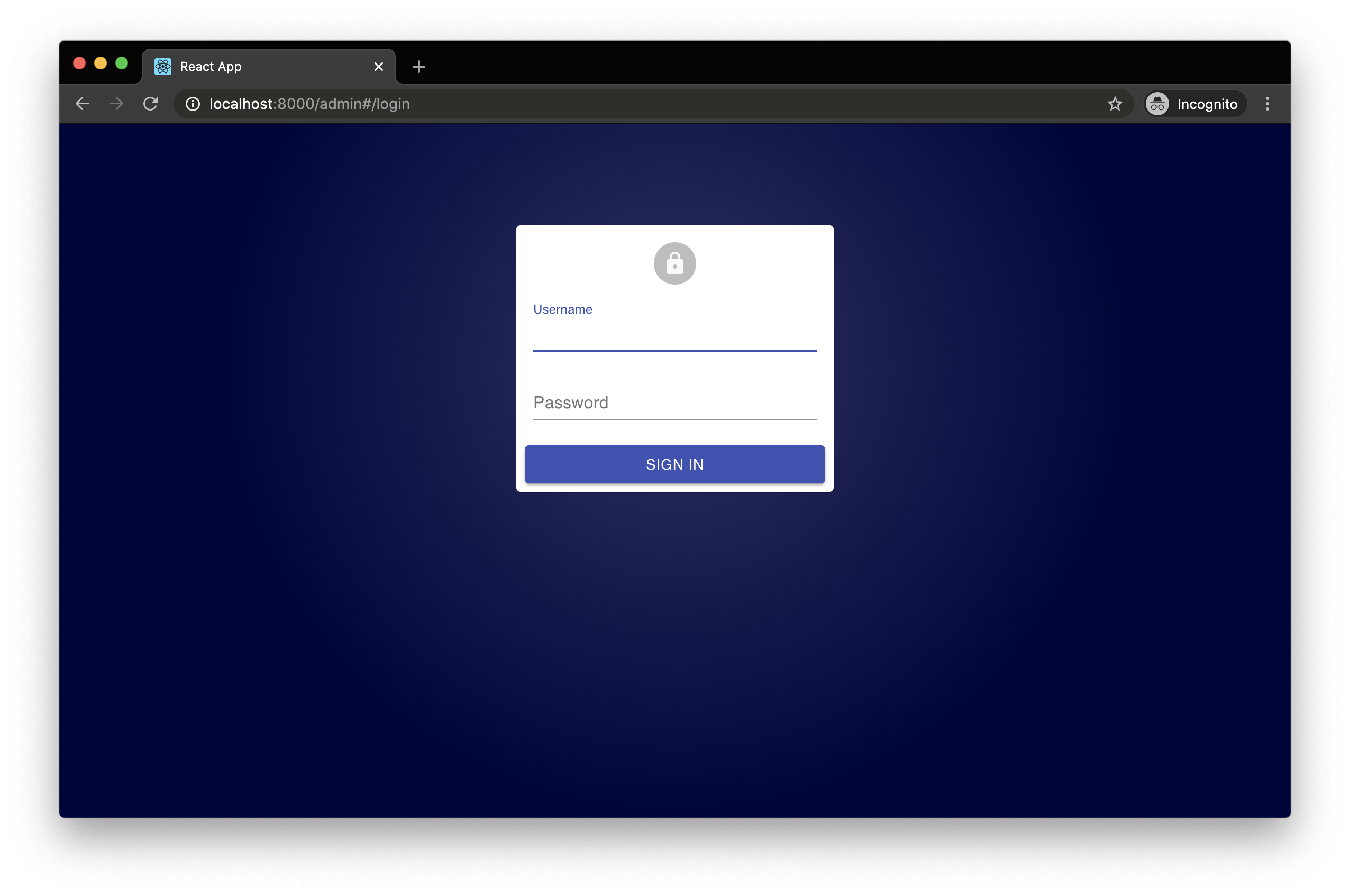 You should now see a list of users which you can edit, add, and delete. The table is configured with the REST endpoints to the FastAPI /users routes in the backend. 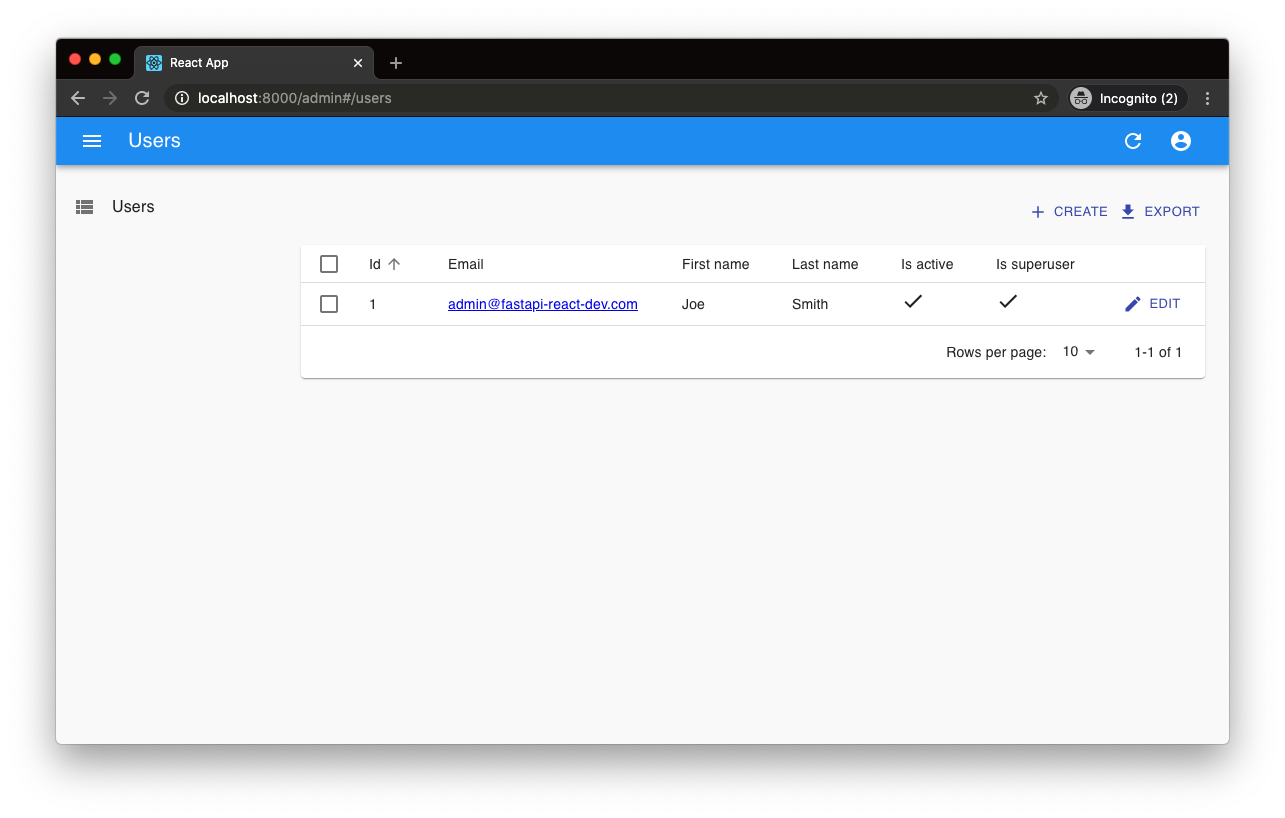 The admin dashboard is kept in the frontend/src/admin directory to keep it separate from the regular frontend.

To generate a secure key used for encrypting/decrypting the JSON Web Tokens, you can run this command:

The default is fine for development but you will want something more secure for production.

You can either set this on project setup as secret_key or manually edit the Python SECRET_KEY variable in backend/app/core/security.py.

This project comes with Pytest and a few Pytest fixtures for easier mocking. The fixtures are all located in backend/conftest.py within your project directory.

All tests are configured to run on a test database using SQLAlchemy transactions to reset the testing state on each function. This is to avoid a database call affecting the state of a different test.

These fixtures are included in backend/conftest.py and are automatically imported into any test files that being with test_.

The test_db fixture is an empty test database and an instance of a SQLAlchemy Session class.

To use an unauthenticated test client, use client:

If you need an authenticated client using OAuth2 and JWTs:

Since OAuth2 expects the access token in the headers, you will need to pass in user_token_headers as the headers argument in any client request that requires authentication.

This template comes with Celery and Redis Docker containers pre-configured for you. For any long running processes, it's recommended that you handle these using a task queue like Celery to avoid making the client wait for a request to finish. Some examples of this might be sending emails, uploading large files, or any long running, resource intensive tasks.

If you are not happy with Celery or Redis, it should be easy to swap these containers out with your favorite tools. Some suggested alternatives might be Huey as the task queue and RabbitMQ for the message broker.

You can monitor tasks using Flower by going to http://localhost:5555

There are a few helper methods to handle authentication in frontend/src/utils. These store and access the JWT returned by FastAPI in local storage. Even though this doesn't add any security, we prevent loading routes that might be protected on the frontend, which results in a better UX experience.

Some basic routes are included (and handled in frontend/Routes.tsx).

This handles routes that require authentication. It will automatically check whether the correct token with the "user" permissions is present or redirect to the home page.

This stack can be adjusted and used with several deployment options that are compatible with Docker Compose, but it may be easiest to use Docker in Swarm Mode with an Nginx main load balancer proxy handling automatic HTTPS certificates, using the ideas from DockerSwarm.rocks.

Please refer to DockerSwarm.rocks to see how to deploy such a cluster easily. You will have to change the Traefik examples to Nginx or update your docker-compose file.