Google Sheets™ add-on for interacting with EVE ESI API. GESI provides an EVE Online SSO flow to authorize your character(s), as well as a wrapper around ESI in order to access your EVE Online data within Google Sheets™; much like =importXML() worked with the old XML API.

By default, one does not have access to GESI functions for use in custom functions in the script editor. In order to gain access to these functions for custom logic, add GESI as a library to your script:

In order to use this, functions must be perpended with GESI, which maps to the Identifier field in the Libraries modal. For example, GESI.universe_types();

NOTE: Libraries do not update on their own. When a new version of GESI is released, click on GESI under the Libraries heading and select the most recent version that is NOT HEAD.

GESI works by defining custom functions that map to ESI routes. For example, if you wanted to get a list of your assets, you would use this endpoint; GET https://esi.evetech.net/v5/characters/{character_id}/assets/. In GESI, this would be =characters_character_assets() within the sheet.

Arguments can also be passed to the functions, =universe_types_type(34), would return type information for Tritanium. In addition to arguments specific to a function, GESI also defines some arguments that are common between all functions.

Google Sheets includes autocomplete for all custom functions, from both within the sheet and script editor. This is a super helpful tool for getting an idea of what each function does. 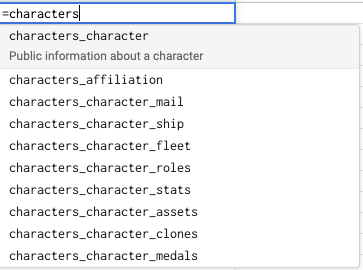 Each specific function also has a tooltip window that provides a summary of a function, what arguments it takes, etc. 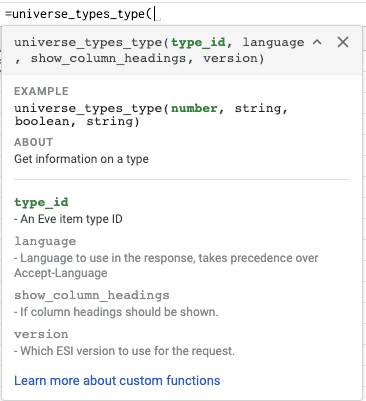 The EXAMPLE section includes a sample function call, with the expected types included. See this for a breakdown of what those types mean.

NOTE: If the tooltip window is missing, you may need to expand it by clicking the little arrow next to the X.

The previous section goes over how to use GESI in its most basic form, getting data from ESI into a spreadsheet; much like =importXML() worked with the old XML API. However, GESI can also be used within Google App Scripts to enable creation of more advanced/complex logic via JavaScript.

NOTE: Be sure to complete the script editor setup instructions.

In addition to the ESI related functions, GESI also provides some methods intended to be used within the script editor.

Internally, each function call results in the creation of an ESIClient for a specific character. The client is used to build and execute the request, parse the response, and format the data to return to the sheet. The creation of a client has some overhead (~0.3s) when created. While this normally does not have any noticeable impact when invoking a single request for a single character; it can become a problem when wanting to do a series of requests based for the same character/endpoint. An example of this could be fetching price history data for a list of type_ids.

Normally one would call markets_region_history(type_id, region_id) in a loop, adding results to some other array for processing later. The problem with this is that each invocation of markets_region_history would result in the creation of a new ESIClient. Fetching 100 ids would take a minimum of 30 seconds (0.3 * 100), when the total time of making those requests is less than 1 second.

The ESIClient can be used by advanced users who are developing advanced/complex sheets in order to increase performance. It can also be used by those who are building on top of GESI, using GESI more as a way to handle authentication while implementing the ESI interactions on their own.

getClient accepts an optional character name argument. This is the character who the client will be tied to, i.e. who the ESI requests will be made on behalf of. If no character name is given, it defaults to the main character. Before the client can be used, it must be initialized with a function name. For example:

Any future calls to the client will be in the context of this function.

These methods are essentially the same as invoke and invokeRaw mentioned within the Built-In Functions section. However, the API is slightly different. Since they are methods of the ESIClient, only the params need to be provided, since the function name is set directly on the client.

The ESIClient also exposes a method that can be used to build a request object given a set of parameters. The most common use case for this would be to build out an array of requests before executing them manually via UrlFetchApp.fetchAll. This way, the user is able to have full control over the ESI data, while not having to worry about authentication, etc.

NOTE: There is no validation of arguments before executing the requests. Be sure to provide all required arguments, of the correct types etc.

How do I know if I have the latest version of GESI?

GESI will automatically update when a new version is released. To see what changed visit the forum thread or the Github Releases page.

NOTE: Changes in the ESI spec, such as adding/removing columns, name changes etc. may break your sheet.

How do I know what functions are available?

What if I want to use a specific ESI route version?

By default GESI uses the version currently on the latest label. If you wish to use a different version, use the version parameter. =characters_character_wallet_journal("Blacksmoke16", true, "v10"). The version can either be a specific version like "v4" or a label: "dev", "legacy", or "latest".

The Authorize Character option in the add-on menu is missing?

This happens when GESI is not authorized to run in the current document. This can be solved by:

How do I get data from a specific character?

Each authenticated endpoint that has a name property that can be used to specify which character's token should be used in that request.

The first character that you authenticate gets set as your main character which will be used if you do not provide a value for the name argument for an authenticated endpoint.

For example =characters_character_assets() would get the assets for the first character that you authenticated, i.e. your MAIN_CHARACTER. =characters_character_assets("My Other Character") would get assets for My Other Character. The getMainCharacter() function can be used to get the name of the current main character. The main character can be updated via Add-Ons => GESI => Set Main Character.

What do the function parameter types mean?

Array types are denoted with a [] following the data type of the parameter. An example of an array type could be number[] where a value for that would be A1:A10 where this range is a column of numbers.

Why does this cell contain all this random data?

As of now if an endpoint returns a property that is an array of objects nested inside the response, I am JSON stringifying it and displaying it in the column. The parseArray allows you to parse that array of values and output it like an endpoint function does, wherever you want to. You supply it with the name of the function the data is from, the column you are parsing, and the cell with the array data.

An example of this would be parseArray("characters_character_skills", "skills", B2) where B2 is the cell that contains the data.

How can I limit what scopes are used?

There is not built-in way to do this currently, however it is possible.

This method can be used directly in the sheet. However, if it requires arguments, then it should be wrapped in a custom function:

invokeMultipleRaw is also available. It works the same as invokeMultiple, but returns an array of raw JSON data for the provided characterNames instead sheets formatted data (2D array).

Working with the raw ESI data

Google Sheets uses 2D arrays to represent data within a sheet. When working on custom functions or scripts, this format is less than ideal to work with. the invokeRaw(functionName, params) function can be used to return the raw ESI JSON data for a given endpoint. The function accepts a name of a function, and an optional object that includes any arguments that should be used. Examples:

This method is meant to be used within custom functions and scripts.

See the advanced usage section for more details on working within the script editor.

Your Login session has expired

How do I know my EVE data isn't being misused?

In order to provide GESI, developers have to agree to the EVE Developer License Agreement. Section 2.3 explicitly prohibits it.

EVE Online and the EVE logo are the registered trademarks of CCP hf. All rights are reserved worldwide. All other trademarks are the property of their respective owners. EVE Online, the EVE logo, EVE and all associated logos and designs are the intellectual property of CCP hf. All artwork, screenshots, characters, vehicles, storylines, world facts or other recognizable features of the intellectual property relating to these trademarks are likewise the intellectual property of CCP hf. CCP hf. has granted permission to GESI to use EVE Online and all associated logos and designs for promotional and information purposes on its website but does not endorse, and is not in any way affiliated with, the GESI. CCP is in no way responsible for the content on or functioning of this website, nor can it be liable for any damage arising from the use of this website.

GESI only requires access to spreadsheets it is enabled on in order to operate. GESI uses the spreadsheet's ID for error logging, and the current user's temporary anonymous key for analytics. GESI does not store, use, share, or access any other data related to your Google account.