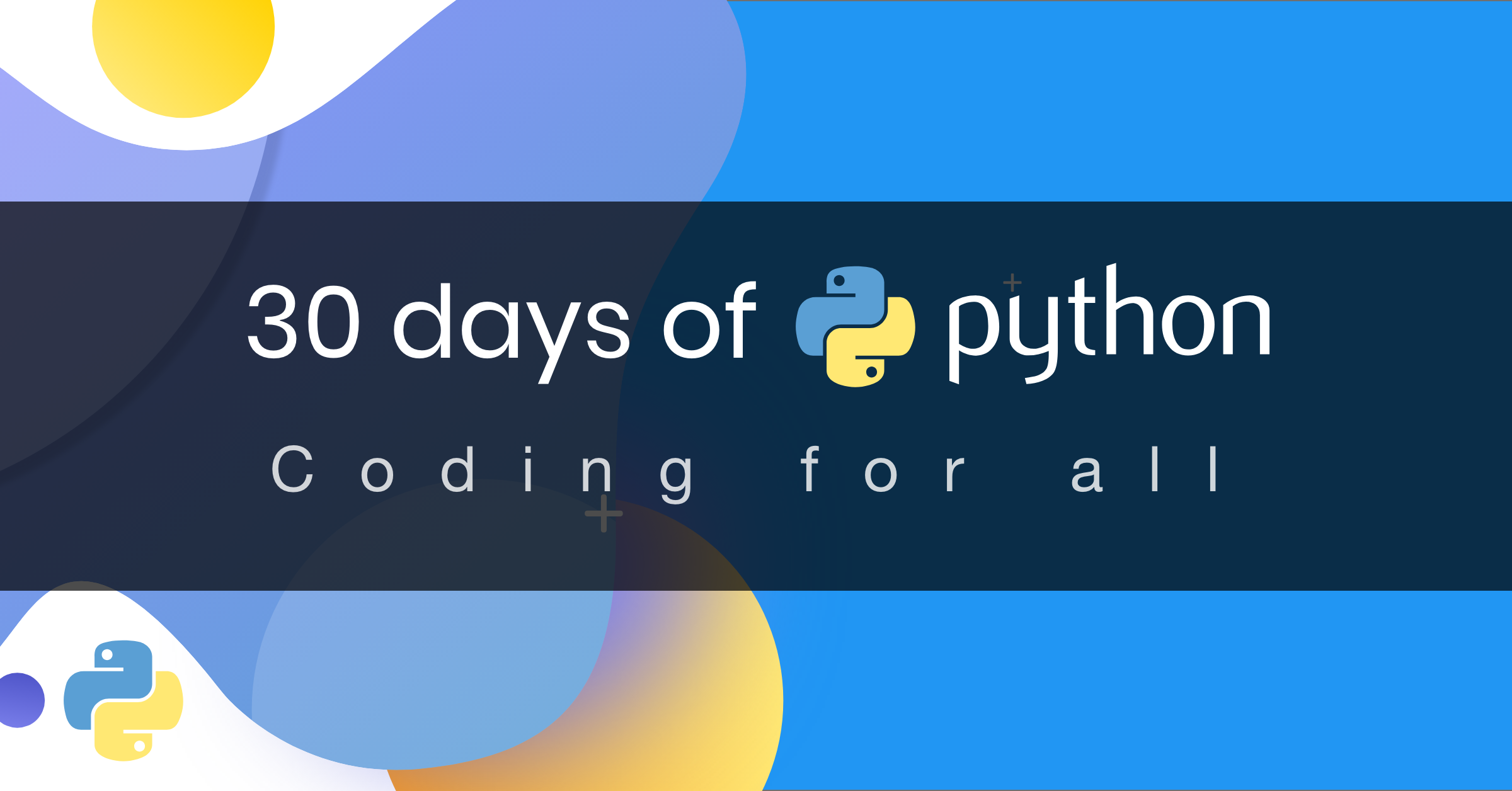 If you would like to actively engage in the challenge, you may join the 30DaysOfPython challenge telegram group.

Python is a high-level programming language for general-purpose programming. It is an open source, interpreted, objected-oriented programming language. Python was created by a Dutch programmer, Guido van Rossum. The name of Python programming language was derived from a British sketch comedy series, Month Python's Flying Circus. The first version was released on February 20, 1991. This 30 days of Python challenge will help you learn the latest version of Python, Python 3 step by step. The topics are broken down into 30 days, where each day contains several topics with easy-to-understand explanations, real-world examples, many hands on exercises and projects.

This challenge is designed for beginners and professionals who want to learn python programming language. It may take 30 to 100 days to complete the challenge, people who actively participate on the telegram group have a high probability of completing the challenge. If you are a visual learner or in favor of videos, you may get started with this Python for Absolute Beginners video.

It is a programming language which is very close to human language and because of that it is easy to learn and use. Python is used by various industries and companies (including Google). It has been used to develop web applications, desktop applications, system adminstration, and machine learning libraries. Python is highly embraced language in the data science and machine learning community. I hope this is enough to convince you to start learning Python. Python is eating the world and you are killing it before it eats you.

To run a python script you need to install python. Let's download python. If your are a windows user. Click the button encircled in red.

If you are a macOS user. Click the button encircled in red.

To check if python is installed write the following command on your device terminal.

As you can see from the terminal, I am using Python 3.7.5 version at the moment. Your version of Python might be different from mine by but it should be 3.6 or above. If you mange to see the python version, well done. Python has been installed on your machine. Continue to the next section.

Python is an interpreted scripting language, so it does not need to be compiled. It means it executes the code line by line. Python comes with a Python Shell (Python Interactive Shell). It is used to execute a single python command and get the result.

Python Shell waits for the Python code from the user. When you enter the code, it interprets the code and shows the result in the next line. Open your terminal or command prompt(cmd) and write:

The Python interactive shell is opened and it is waiting for you to write Python code(Python script). You will write your Python script next to this symbol >>> and then click Enter. Let us write our very first script on the Python scripting shell.

Now, you know how to open the Python interactive shell and how to exit from it.

Python will give you results if you write scripts that Python understands, if not it returns errors. Let's make a deliberate mistake and see what Python will return.

The process of identifying and removing errors from a program is called debugging. Let us debug it by putting * in place of x.

Our bug was fixed, the code ran and we got a result we were expecting. As a programmer you will see such kind of errors on daily basis. It is good to know how to debug. To be good at debugging you should understand what kind of errors you are facing. Some of the Python errors you may encounter are SyntaxError, IndexError, NameError, ModuleNotFoundError, KeyError, ImportError, AttributeError, TypeError, ValueError, ZeroDivisionError etc. We will see more about different Python error types in later sections.

Let us practice more how to use Python interactive shell. Go to your terminal or command prompt and write the word python.

Let us do some maths first before we write any Python code:

In python we have the following additional operations:

Let us change the above mathematical expressions to Python code. The Python shell has been opened and let us write a comment at the very beginning of the shell.

A comment is a part of the code which is not executed by python. So we can leave some text in our code to make our code more readable. Python does not run the comment part. A comment in python starts with hash(#) symbol. This is how you write a comment in python 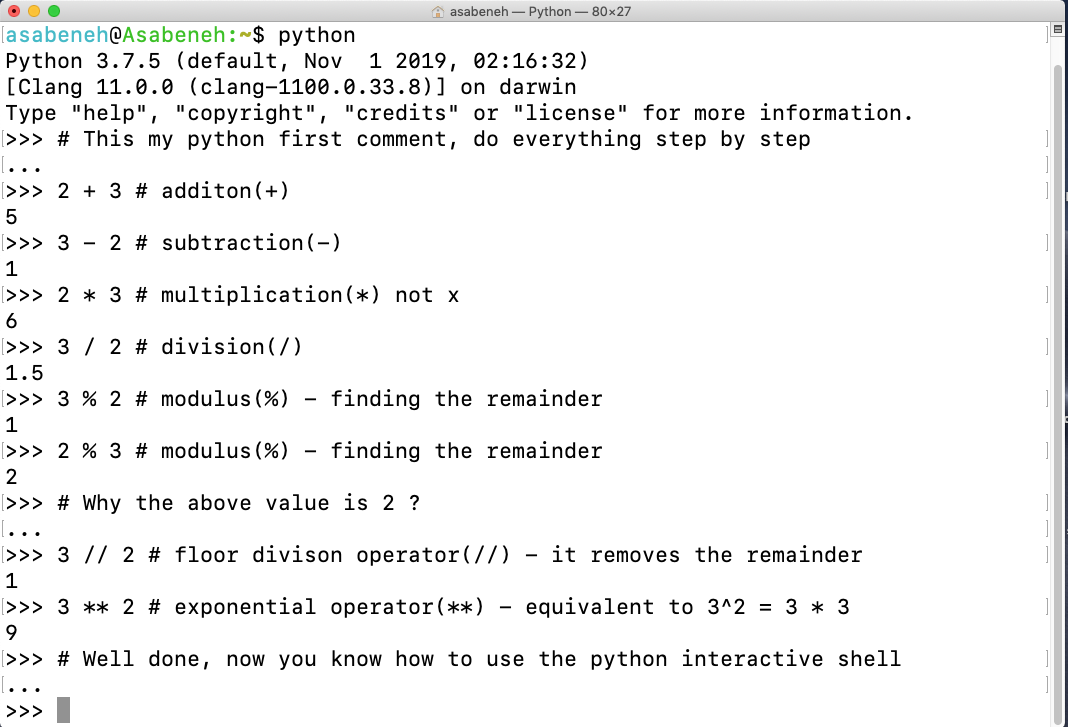 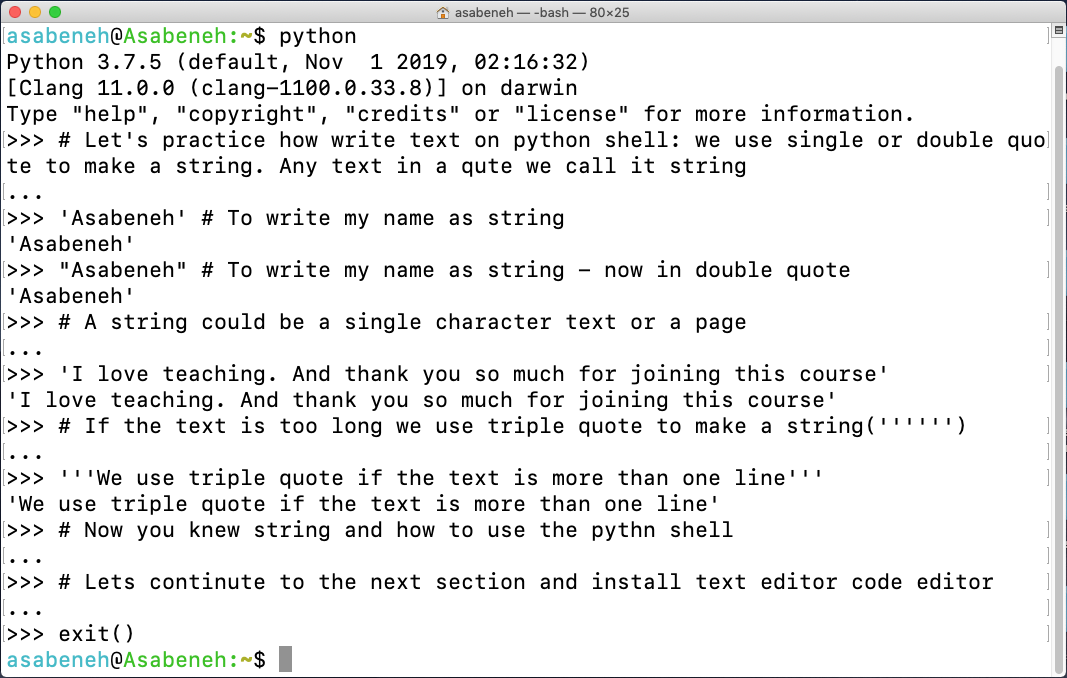 The Python interactive shell is good to try and test small script codes but it will not be for a big project. In real work environment, developers use different code editors to write codes. In this 30 days of Python programming challenge we will use visual studio code. Visual studio code is a very popular open source text editor. I am a fan of vscode and I would recommend to download visual studio code, but if you are in favor of other editors, feel free to follow with what you have. 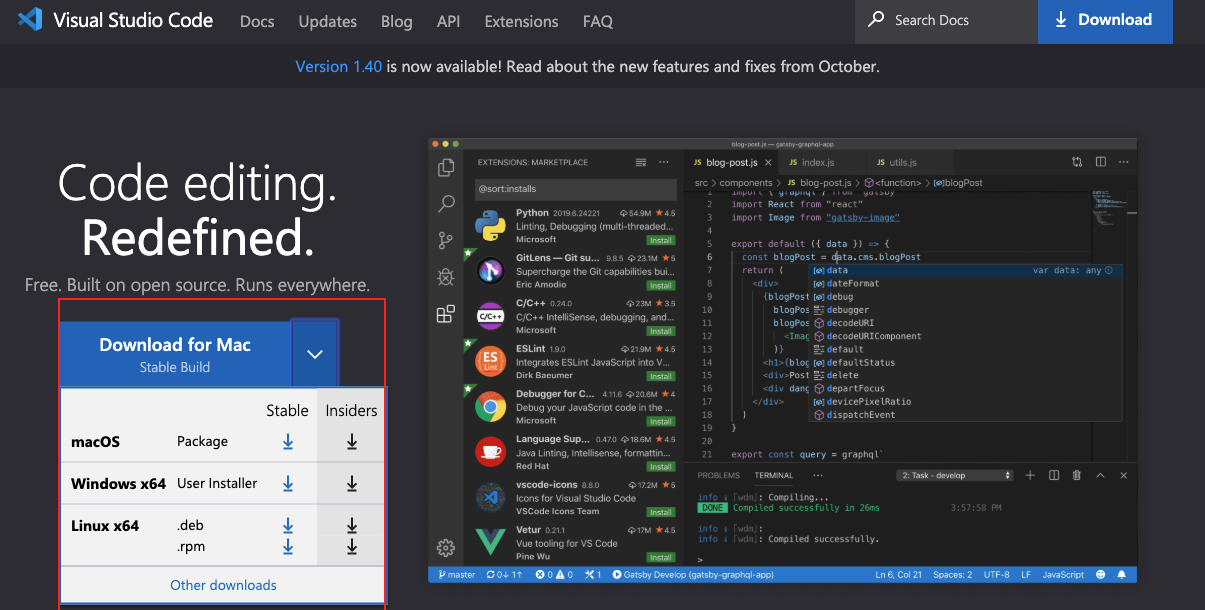 If you installed visual studio code, let us see how to use it. If you prefer a video, you can follow this Visual Studio Code for Python Video tutorial

How to use visual studio code 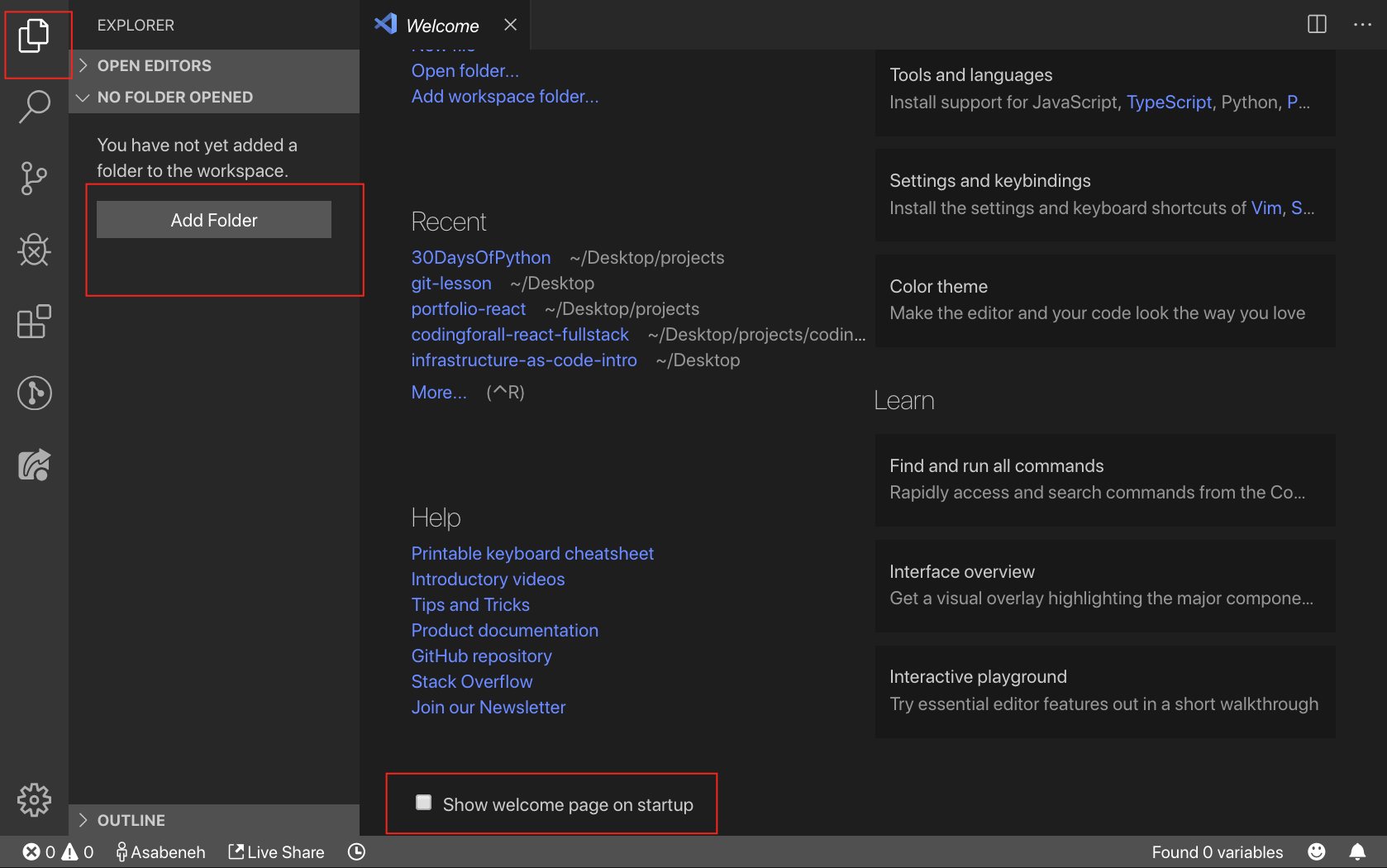 Create a folder named 30DaysOfPython on your desktop. Then open it using visual studio code.

After opening it you will see shortcuts for creating files and folders inside of 30DaysOfPython project's directory. As you can see below, I have created the very first file, helloworld.py. You can do the same. 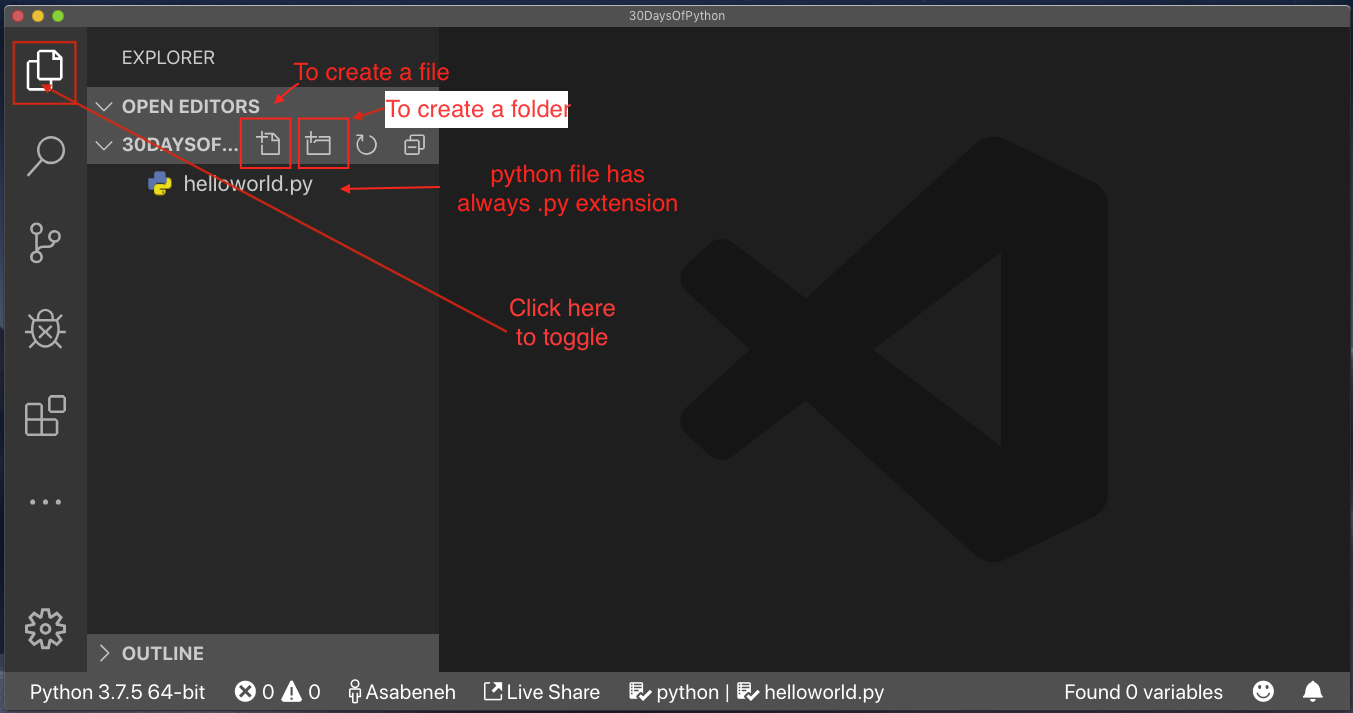 After a long day of coding, you want to close your code editor, right? This is how you will close the opened project. 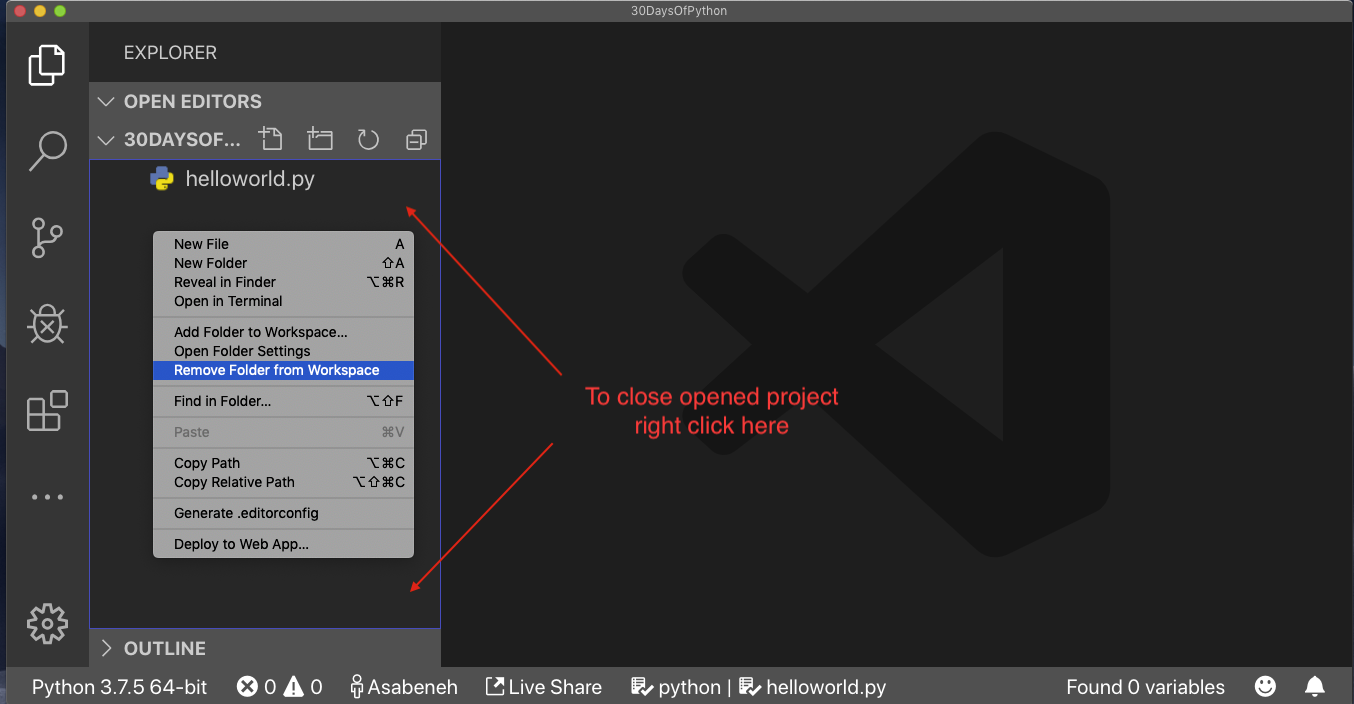 Congratulations, you have finished setting up the development environment. Let us start coding.

A Python script can be written in Python interactive shell or in the code editor. A Python file has an extension .py.

Comments are very important to make the code more readable and to leave remarks in our code. Python does not run comment parts of our code. Any text starting with hash(#) in Python is a comment.

In Python there are several types of data types. Let us get started with the most common ones. Different data types will be covered in detail in other sections. For the time being, let us just go through the different data types and get familiar with them. You do not have to have a clear understanding now.

A collection of one or more characters under a single or double quote. If a string is more than one sentence then we use a triple quote.

A boolean data type is either a True or False value. T and F should be always uppercase.

Python list is an ordered collection which allows to store different data type items. A list is similar to an array in JavaScript.

A Python dictionary object is an unordered collection of data in a key value pair format.

A tuple is an ordered collection of different data types like list but tuples can not be modified once they are created. They are immutable.

In later sections, we will go in detail about each and every Python data type.

To check the data type of certain data/variable we use the type function. In the following terminal you will see different python data types: 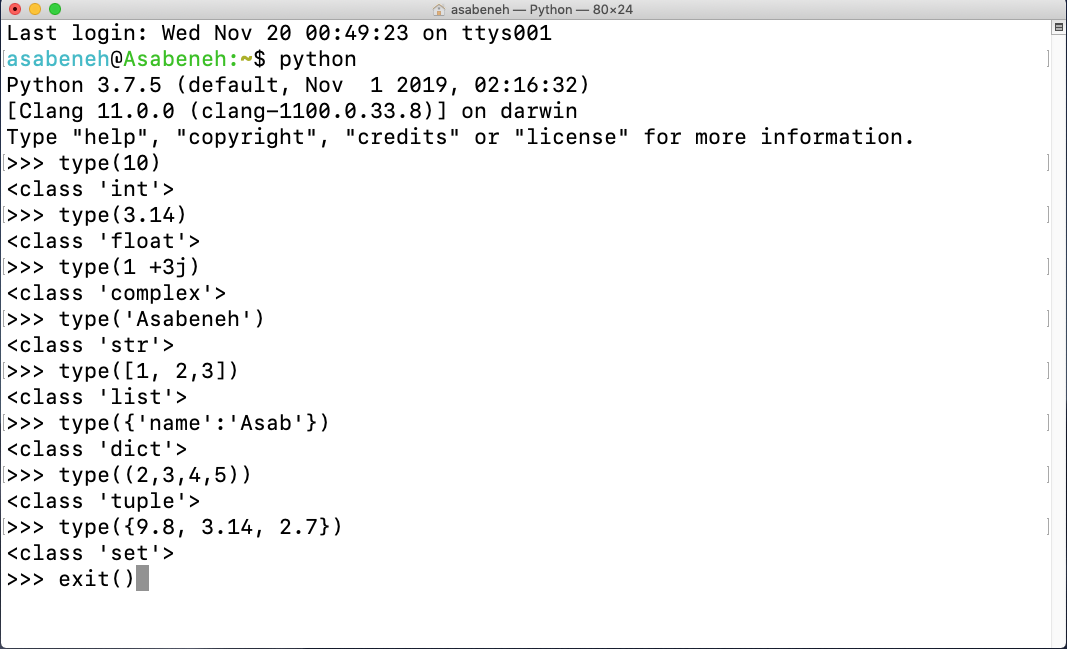 The Python interactive shell was printing without using print but on visual studio code to see our result we should use a built in function *print(). The print() built-in function takes one or more arguments as follows print('arument1', 'argument2', 'argument3'). See the examples below.

The file name is helloworld.py 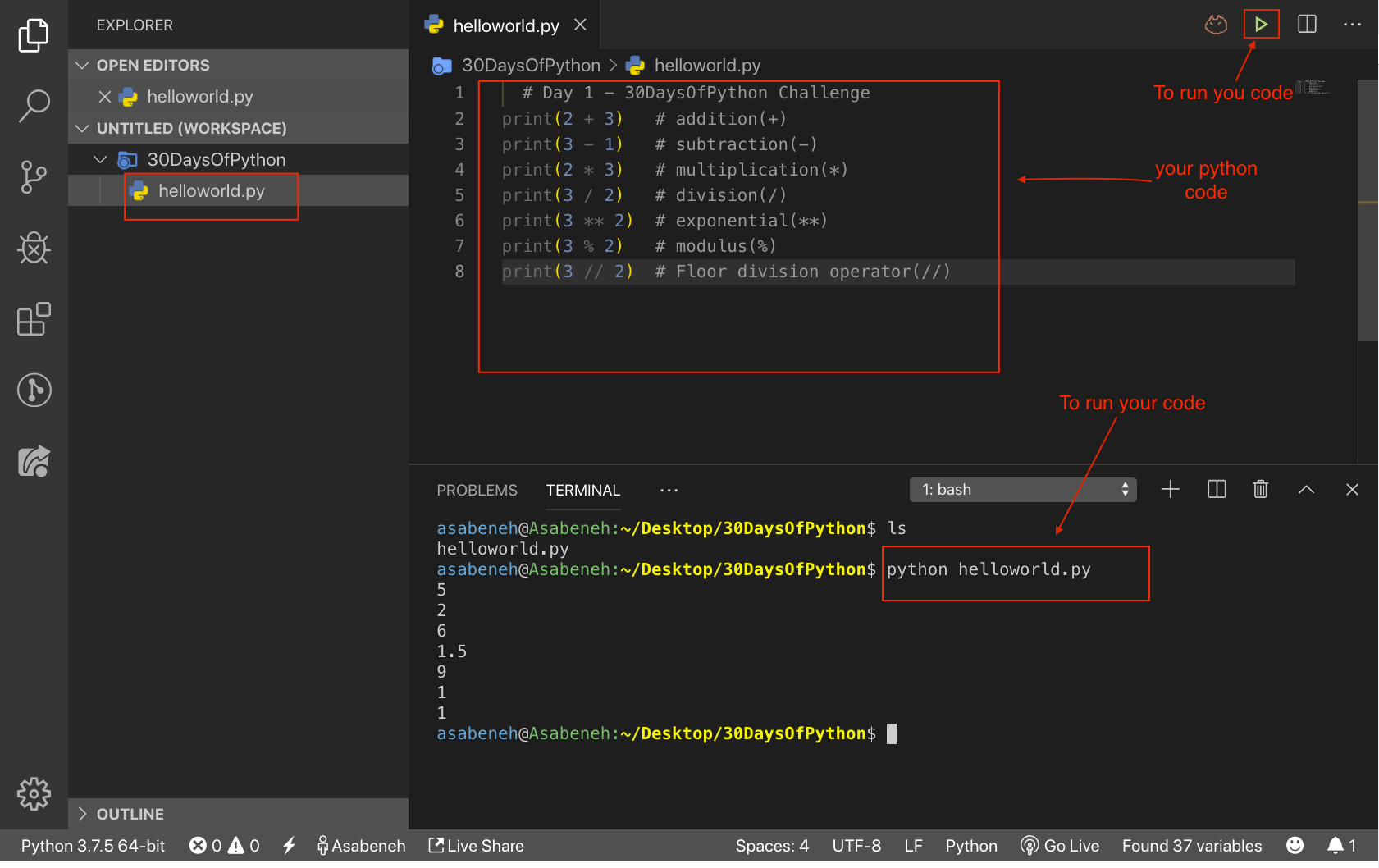 You are amazing. You have just completed day 1 challenge and you are on your way to greatness. Now do some exercises for your brain and muscles.