Read this in other languages: English, Russian.

Well-known systems for passive OS fingerprinting such as p0f, satori, etc are powerful, but have some disadvantages for production use:

Sensor is a tshark-driven selective traffic exporter, it's exports only SYN, SYN+ACK, TLS client hello and HTTP requests/responses to external elasticsearch index. System can have as many sensors as needs.

Collector is an elasticsearch cluster. Also, system can have more than one collector if needs.

All system components can be installed on signle host

Every module has an .env file with docker-compose configuration, you should replace data in this file.

You needs to create folder which will be used elasticsearch for persist data In our sample, it's a ./data directory in collector folder, as configured in docker-compose.yml:

You need to replace string device: $PWD/data and make sure that this directory exists, or remove lines 3-6 for use docker-driven volume.

If elasticsearch is ready (but it's not necessary - containers always restart on failure), simply edit .env in sensor directory and run docker-compose up -d

Now, we can install and run analyzer as simple as edit .env and run docker-compose up -d in analytics-app directory. Open http://${host}:5601 to open kibana GUI and http://${host}:3000 to open analytics app, where host is your ip or domain name.

To store data in buffer (for paste in filter, for example) click copy button beside data: 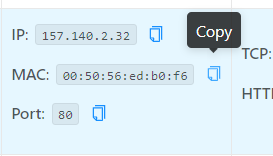 Statistics menu item has two tabs: by clients and by servers:

Each tab has a grid with (ip, mac) discovered tuples from traffic.

Every row is clickable and you can see detailed information about selected host by click on row (opening in right-side drawer): 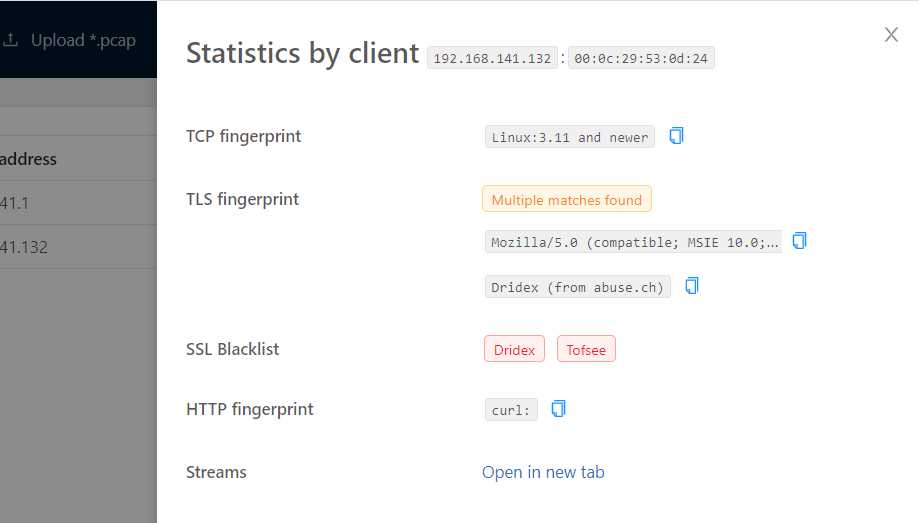 As you can see, this information includes all fingerprints from stream and reference to these streams list, also in this example showed case of multiple discovered fingerprints (TLS) and matches from SSL blacklist (Dridex, Tofsee).