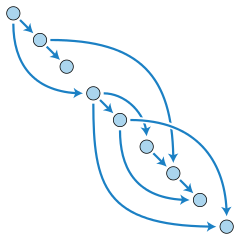 This library offers efficient and well-tested algorithms for

The algorithms can be applied to any graph data structure implementing the two Iterator methods: Order, which returns the number of vertices, and Visit, which iterates over the neighbors of a vertex.

All algorithms operate on directed graphs with a fixed number of vertices, labeled from 0 to n-1, and edges with integer cost. An undirected edge {v, w} of cost c is represented by the two directed edges (v, w) and (w, v), both of cost c. A self-loop, an edge connecting a vertex to itself, is both directed and undirected.

The type Mutable represents a directed graph with a fixed number of vertices and weighted edges that can be added or removed. The implementation uses hash maps to associate each vertex in the graph with its adjacent vertices. This gives constant time performance for all basic operations.

The type Immutable is a compact representation of an immutable graph. The implementation uses lists to associate each vertex in the graph with its adjacent vertices. This makes for fast and predictable iteration: the Visit method produces its elements by reading from a fixed sorted precomputed list.

The subpackage graph/build offers a tool for building graphs of type Virtual.

In a virtual graph no vertices or edges are stored in memory, they are instead computed as needed. New virtual graphs are constructed by composing and filtering a set of standard graphs, or by writing functions that describe the edges of a graph.

The following standard graphs are predefined:

The following operations are supported:

Non-virtual graphs can be imported, and used as building blocks, by the Specific function. Virtual graphs don't need to be “exported‬”; they implement the Iterator interface and hence can be used directly by any algorithm in the graph package.

Once you have installed Go, run this command to install the graph package:

There is an online reference for the package at godoc.org/github.com/yourbasic/graph.

The only accepted reason to modify the API of this package is to handle issues that can't be resolved in any other reasonable way.

New features and performance enhancements are limited to basic algorithms and data structures, akin to the ones that you might find in a computer science textbook.