Use at Google Fonts

Work Sans was made in part on the stolen lands of the Wurundjeri and Boon Wurrung people of the Kulin nations. I pay my respect to their elders, past, present and future. Sovereignty has never been ceded.

If you have used Work Sans please consider supporting and donating to the following list of Indigenous organisations and funds: 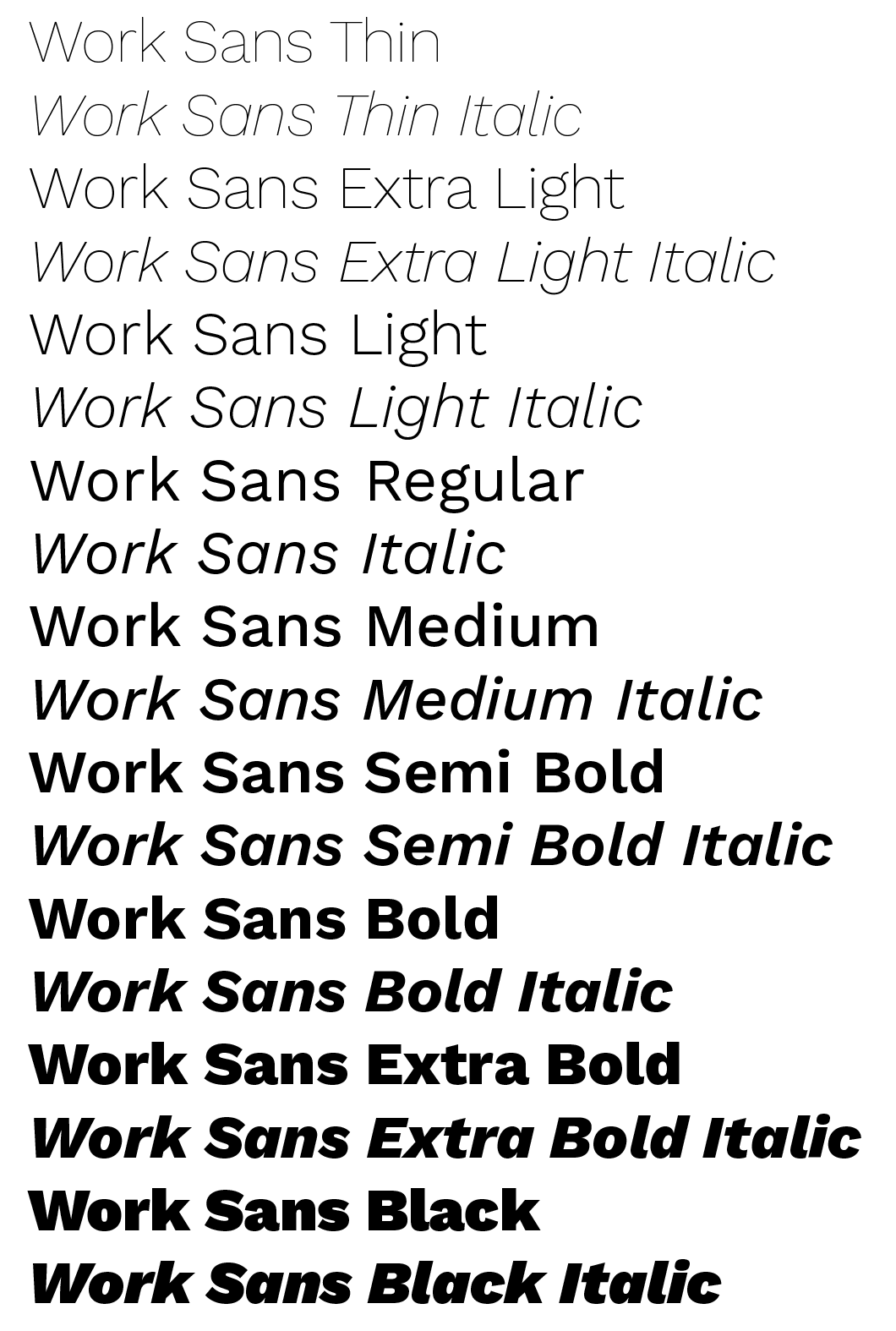 Work Sans has been updated between 2018–2020 with accompanying italics, variable font files and the character set has been expanded to the Google Latin Expert glyph set, which will now support Vietnamese along with these additional languages:

Some glyph drawings have been updated (improved!), kerning has been fixed in some areas.

Reflow will occur, things will get a tiny bit tighter in some areas.

There will no longer be desktop specific OTF fonts: please install the TTF fonts.

Work Sans is a 9 weight typeface family based loosely on early Grotesques — i.e. Stephenson Blake, Miller & Richard and Bauerschen Giesserei. The core of the fonts are optimised for on-screen medium-sized text usage (14px-48px) – but still can be used in print well. The fonts at the extreme weights are designed more for display use. Overall, features are simplified and optimised for screen resolutions – for example, diacritic marks are larger than how they would be in print.

The fonts under /fonts/variable are variable TTF fonts.

This typeface was funded by Google and is distributed by Google Fonts – many thanks to Dave Crossland for the commission.

The project started in June 2014 and the brief was to have a minimum viable product (alpha release with 9 weights) by December 2014. Work Sans was first available on Google fonts in July 2015. Work Sans was updated between 2018–2020 with Italics and an expanded character set.

If you spot any errors or have any suggestions for improvements you can fork this project, create an Issue.

Hjerteleg tusen takk til Tone Sjåstad for her suport, patience, encouragement and inspiration throughout the process.

Thanks to the following people for their assitance and contributions:

Thanks to Simon Egli for inviting me to work together on Metapolator in the first place.

Thanks to everyone who was in my pocket the whole time.

Fonts are built automatically by GitHub Actions - take a look in the "Actions" tab for the latest build.

If you particularly want to build fonts manually on your own computer, you will need to install the yq utility. On OS X with Homebrew, type brew install yq; on Linux, try snap install yq; if all else fails, try the instructions on the linked page.

This Font Software is licensed under the SIL Open Font License, Version 1.1. This license is copied below, and is also available with a FAQ at http://scripts.sil.org/OFL

This font repository structure is inspired by Unified Font Repository, modified for the Google Fonts workflow.