The httprecon project is doing some research in the field of web server fingerprinting, also known as http fingerprinting. The goal is the highly accurate identification of given httpd implementations. This is very important within professional vulnerability analysis.

Besides the discussion of different approaches and the documentation of gathered results also an implementation for automated analysis is provided. This software shall improve the easyness and efficiency of this kind of enumeration. Traditional approaches as like banner-grabbing, status code enumeration and header ordering analysis are used. However, many other analysis techniques were introduced to increase the possibilities of accurate web server fingerprinting. Some of them were already discussed in the book Die Kunst des Penetration Testing (Chapter 9.3, HTTP-Fingerprinting, pp. 530-550).

The application works very straight forward. After the user has defined the target service which shall be fingerprinted, a common tcp connection is opened to the destination port. If the connection could be established, the http requests are sent to the target service. This one will shall react with responses. These could be dissected to identify some specific fingerprint elements. Those elements are looked up in the local fingerprint database. If there is a match, the according implementation is flagged as "identified". All these flags were counted so httprecon is able to determine which implementation has the best match rate.

The following picture illustrates the architecture of the whole framework. The scan engine uses nine different requests which are sent to the target web server. These shall provoke the response which can be used for the fingerprinting. There were different kind of requests used. Some of them are very common and legitimate (e.g. GET / HTTP/1.1) and others are usually not accepted due to their malicious nature (e.g. a very long URI in a GET request). 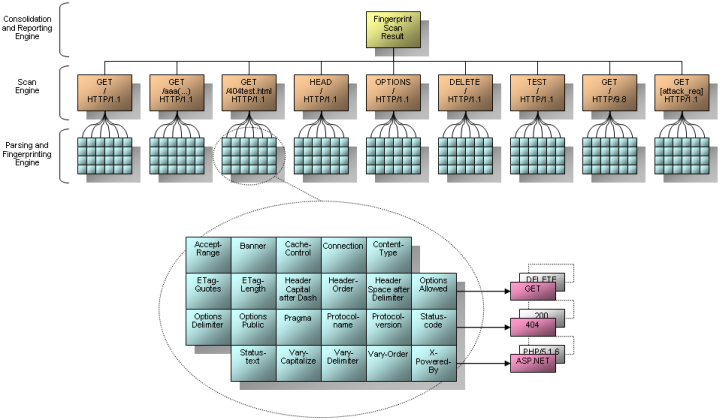 The dissection of the responses is handled by the parsing and fingerprint engine. As you can see many different fingerprint elements are looked up (e.g. statuscode, banner, Etag length, header-order, etc.). These elements are saved in the local fingerprint database which allows the sum of the matches. All data is correlated which will result in the final fingerprint scan report.

These are the main features of the current implementation of httprecon which makes this solution better than other tools of this kind:

There are differen applications for http fingerprinting available. This Excel sheet is comparing the four most popular HTTP fingerprinting tools (httprecon, httprint, hmap, and WebserverFP).

Most web server implementations come with a Key Analysis Index (KAI), a very special and dominant behaviour which allows a very quick identification. The following list shall demonstrate the KAI for some popular implementations:

The possibility of fingerprinting is not a vulnerability in a traditional way which allows to compromise a host. It is more a flaw or exposure which may provide the foundation for further enumeration and specific attack scenarios.

Nevertheless, applying some counter-measures to harden a service is always a good idea. Preventing fingerprinting 100 % is not possible due to the nature of interaction between network software. But there are possibilities to decrease the accuracy of such an analysis. These are illustrated in the diagram and listed below:

Change or supression of banner

The most accepted and widely known approach to defend against fingerprinting is the manipulation or change of the application banner. Within web responses the line Server announces the name of the given implementation. Some web servers allow the change of this value within a configuration file.

Microsoft IIS requires some hex hack in the library W3SVC.DLL to change the Server-output. There is a freeware named MS IIS/PWS Banner Edit Tool available which automates this manipulation. IISBanner is a well-known ISAPI filter which can be used to safely remove or disguise the IIS server header by editing the INI file. Microsoft suggests the use of URLscan which introduces the same advantages.

thttpd allows some minor changes within the file config.h which steers some of the settings during compilation (e.g. ERR_APPEND_SERVER_INFO for the announcement of the server name within server generated error pages or the default charset of iso-8859-1 in DEFAULT_CHARSET). Furthermore it is possible to change SHOW_SERVER_VERSION which suppresses the version number announcement in the Server line. To change or suppress the real server name a modification of EXPOSED_SERVER_SOFTWARE within libhttpd.c is required:

The open-source web server fnord does not support any configuration settings or constant mutation within the source code to modify the application behavior easily. The announcement of the web server as FNORD is realized within the separated replies created by buffer_puts() in httpd.c. This includes the application banner, status messages and header order. However, enhanced search and replace modifications might improve the obscurity without touching the architecture of the application. Further improvements as like introduction of new http methods (by default only GET, POST and HEAD are suppoted in version 1.10) require some deeper modifications.

Some modules (e.g. PHP and SSH) announce themselves within the Server line. In most cases this can be prevented with a configuration setting for the according module. For PHP in the file php.ini the value expose_php must be set to Off.

Web servers include implementation dependent statuscodes and statustexts in their responses. Changeing them prevents most of todays web server fingerprinting. Only a few http daemons allow such change of basic behaviour within run-time configuration.

Apache requires some changes within the source code and re-compilation. In /src/include/httpd.h the statuscodes are defined as integer constants:

And in /src/modules/http/http_protocol.c the statustexts are defined as string constants:

An easier way to change the status reaction for specific request types (e.g. unsupported http methods as like DELETE) is the use of re-write rules. Instead of react with the expected error message 405 a less usefull forwarding to a 404 error site is possible. Most web servers support such definitions within .htaccess files. The following example is redirecting the unwanted requests to 403 Forbidden instead to 405 Method Not Allowed if the Apache web server has mod_rewrite enabled:

Some web server fingerprinting tools regard header values and header order. Changeing this within the web server usually requires some deep impact to the source code too. This requires a very high level of understanding the given application. The rate of errors might be very high with such an intrusive change.

In Microsoft IIS new custom header values can be added which changes the overview fingerprint of the header order. Just by adding one new header line (usually web browsers ignore those which start with X, e.g. X-Garbage) the possibilities of successful fingerprints can be reduced. This is possible very easily in the tab HTTP headers in the web site properties. Those can be reached within the context menu of the according web site in the Internet Information Services (IIS) Manager. In some cases it is possible to overwrite some other header values (e.g. the location in 302 moved messages). However, this is not possible for the Server banner itself.

However, some scripting languages as like PHP allow the web developer to have some influence to the headers with the function header(). For example a new header with the call header("X-Powered-By: ASP.NET 2.0") can be used althought no ASP.NET is used at all. This compromises the fingerprint analysis, especially if it is very static and pattern-based, in any way. In ASP.NET the function Response.AppendHeader() is used for the same purposes.

The ColdFusion Markup Language (CFML) uses the tag cfheader to define headers and their values. Status codes can be changed with a statement like

Another way of defending against fingerprinting utilities is to redirect attack scripts as like httprecon. Within the following .htaccess example the well-known user-agents are detected and redirected to the attackers own computer:

This introduces several advantages. First, the attacker is consuming more of his resources which might slow down the scan approach. Second, most of the attack scripts do not recognize the redirect and think the final destination host - which is the attackers own computer - shall be fingerprinted. Thus, in some cases wrong results might be gathered.

However, this blacklist technique only works as long as the attack scripts are detected properly. If the attacker is going to change the approach and behavior of the scanning software, no further redirection might be possible.

During the development of httprecon and the use of the software in professional penetration tests several funny things could be observed: