pdb++, a drop-in replacement for pdb

This module is an extension of the pdb module of the standard library. It is meant to be fully compatible with its predecessor, yet it introduces a number of new features to make your debugging experience as nice as possible. 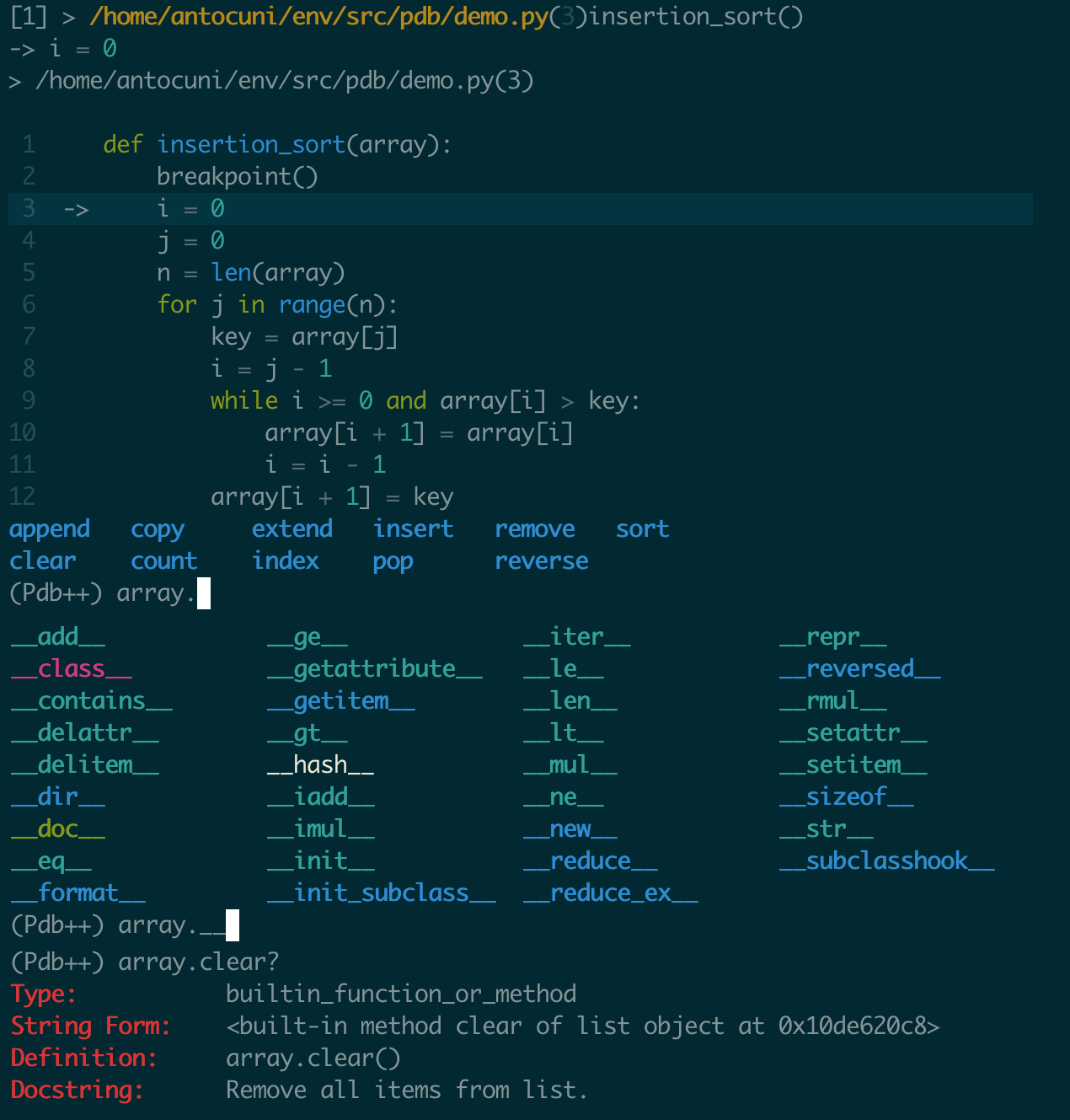 pdb++ is meant to be a drop-in replacement for pdb. If you find some unexpected behavior, please report it as a bug.

Since pdb++ is not a valid package name the package is named pdbpp:

pdb++ is also available via conda:

Alternatively, you can just put pdb.py somewhere inside your PYTHONPATH.

Note that the module is called pdb.py so that pdb++ will automatically be used in all places that do import pdb (e.g. pytest --pdb will give you a pdb++ prompt).

The following are new commands that you can use from the interactive (Pdb++) prompt.

sticky [start end]
Toggle sticky mode. When in this mode, every time the current position changes, the screen is repainted and the whole function shown. Thus, when doing step-by-step execution you can easily follow the flow of the execution. If start and end are given, sticky mode is enabled and only lines within that range (extremes included) will be displayed.
longlist (ll)
List source code for the current function. Different from the normal pdb list command, longlist displays the whole function. The current line is marked with ->. In case of post-mortem debugging, the line which actually raised the exception is marked with >>. If the highlight config option is set and Pygments is installed, the source code is highlighted.
interact
Start an interactive interpreter whose global namespace contains all the names found in the current scope.
track EXPRESSION
Display a graph showing which objects are the value of the expression refers to and are referred by. This command requires the pypy source code to be importable.
display EXPRESSION
Add an expression to the display list; expressions in this list are evaluated at each step, and printed every time its value changes. WARNING: since these expressions are evaluated multiple times, make sure not to put expressions with side-effects in the display list.
undisplay EXPRESSION:
Remove EXPRESSION from the display list.
source EXPRESSION
Show the source code for the given function/method/class.
edit EXPRESSION
Open the editor in the right position to edit the given function/method/class. The editor used is specified in a config option.
hf_unhide, hf_hide, hf_list
Some frames might be marked as "hidden" by e.g. using the @pdb.hideframe function decorator. By default, hidden frames are not shown in the stack trace, and cannot be reached using up and down. You can use hf_unhide to tell pdb to ignore the hidden status (i.e., to treat hidden frames as normal ones), and hf_hide to hide them again. hf_list prints a list of hidden frames. The config option enable_hidden_frames can be used to disable handling of hidden frames in general.

By default, pdb tries hard to interpret what you enter at the command prompt as one of its builtin commands. However, this is inconvenient if you want to just print the value of a local variable which happens to have the same name as one of the commands. E.g.:

In the example above, instead of printing 42 pdb interprets the input as the command continue, and then you lose your prompt. It's even worse than that, because it happens even if you type e.g. c.__class__.

pdb++ fixes this unfriendly (from the author's point of view, of course :-)) behavior by always preferring the variable in scope, if it exists. If you really want to execute the corresponding command, you can prefix it with !!. Thus, the example above becomes:

Note that the "smart" behavior takes place only when there is ambiguity, i.e. if there exists a variable with the same name as a command: in all other cases, everything works as usual.

Regarding the list command itself, using list( is a special case that gets handled as the Python builtin:

Additional functions in the pdb module

The pdb module that comes with pdb++ includes all the functions and classes that are in the module from the standard library. If you find any difference, please report it as a bug.

In addition, there are some new convenience functions that are unique to pdb++.

pdb.xpm()
eXtended Post Mortem: it is equivalent to pdb.post_mortem(sys.exc_info()[2]). If used inside an except clause, it will start a post-mortem pdb prompt from the line that raised the exception being caught.
pdb.disable()
Disable pdb.set_trace(): any subsequent call to it will be ignored.
pdb.enable()
Re-enable pdb.set_trace(), in case it was disabled by pdb.disable().

@pdb.hideframe
A function decorator that tells pdb++ to hide the frame corresponding to the function. Hidden frames do not show up when using interactive commands such as up, down or where, unless hf_unhide is invoked.
@pdb.break_on_setattr(attrname, condition=always)

If can be used even after the class has already been created, e.g. if we want to break when some attribute of a particular object is set:

This can be used after pdb.set_trace() also:

To customize pdb++, you can put a file named .pdbrc.py in your home directory. The file must contain a class named Config inheriting from pdb.DefaultConfig and override the desired values.

The following is a list of the options you can customize, together with their default value:

prompt = '(Pdb++) '
The prompt to show when in interactive mode.
highlight = True
Highlight line numbers and the current line when showing the longlist of a function or when in sticky mode.
encoding = 'utf-8'
File encoding. Useful when there are international characters in your string literals or comments.
sticky_by_default = False
Determine whether pdb++ starts in sticky mode or not.
line_number_color = pdb.Color.turquoise
The color to use for line numbers. See Notes on color options.
filename_color = pdb.Color.yellow
The color to use for file names when printing the stack entries. See Notes on color options.
current_line_color = "39;49;7"
The SGR parameters for the ANSI escape sequence to highlight the current line. The default uses the default foreground (39) and background (49) colors, inversed (7). See Notes on color options.
editor = None
The command to invoke when using the edit command. By default, it uses $EDITOR if set, else vim or vi (if found). If only the editor command is specified, the emacs and vi notation will be used to specify the line number: COMMAND +n filename. It's otherwise possible to use another syntax by using the placeholders {filename} and {lineno}. For example with sublime text, specify editor = "subl {filename}:{lineno}".
truncate_long_lines = True
Truncate lines which exceed the terminal width.
exec_if_unfocused = None
Shell command to execute when starting the pdb prompt and the terminal window is not focused. Useful to e.g. play a sound to alert the user that the execution of the program stopped. It requires the wmctrl module.
enable_hidden_frames = True
Certain frames can be hidden by default. If enabled, the commands hf_unhide, hf_hide, and hf_list can be used to control display of them.
show_hidden_frames_count = True
If enable_hidden_frames is True this controls if the number of hidden frames gets displayed.
def setup(self, pdb): pass
This method is called during the initialization of the Pdb class. Useful to do complex setup.
show_traceback_on_error = True

Display tracebacks for errors via Pdb.error, that come from Pdb.default (i.e. the execution of an unrecognized pdb command), and are not a direct cause of the expression itself (e.g. NameError with a command like doesnotexist).

With this option disabled only *** exception string gets printed, which often misses useful context.

use_pygments = None
By default Pygments is used for syntax highlighting of source code when it can be imported, e.g. when showing the longlist of a function or when in sticky mode.

The default is to auto-detect the best formatter based on the $TERM variable, e.g. it uses Terminal256Formatter if the $TERM variable contains "256color" (e.g. xterm-256color), but also knows about e.g. "xterm-kitty" to support true colors (TerminalTrueColorFormatter). TerminalFormatter gets used as a fallback.

A dictionary of keyword arguments to pass to the formatter's constructor.

The default arguments (updated with this setting) are:

The values for color options will be used inside of the SGR escape sequence \e[%sm where \e is the ESC character and %s the given value. See SGR parameters.

Constants are available via pdb.Color, e.g. pdb.Color.red ("31;01"), but in general any string can be used here.

The goal is to make refactoring easier in the future: if you wonder why a certain line of code does something, in principle it should be possible to comment it out and see which tests fail.

In exceptional cases, the test might be too hard or impossible to write: in such cases it is fine to do a commit without a test, but you should explain very precisely in the commit message why it is hard to write a test and how to reproduce the buggy behavior by hand.

It is fine NOT to write a test in the following cases: