I've got myself a Raspberry Pi 3 and want to use it as my home router and VPN gateway. At some point, I'll probably accidentally step on it or pour a flat white on it and then wonder how I set it up to do what it's supposed to do.

To avoid this, here are some notes and scripts to make it less painful when that happens. Don't confuse this with a tutorial. I'm writing this first and foremost for myself. However, if you have any suggestions, feel free to send PRs my way.

Have a WiFi access point that I can connect my phone and ChromeCast to and transparently get routed through an OpenVPN.

To set up the other side of this, I can whole-heartedly recommend the docker-openvpn suite which makes the server-side setup a breeze.

You get a WiFi hotspot that tunnels all requests through tun0 which is backed by an OpenVPN connection. I'm not sure if this is stable enough for use and there's no good way from the outside to enable/disable VPNs.

Copy playbook.yml.example to playbook.yml and make the necessary adjustments, notably add your premiumize.me credentials to it. Afterwards, you can run it like:

This assumes that the hostname in hosts can be resolved and you can log in password-less via the pi user. It also expects the Pi to already have a working internet connection.

Everything should automatically start up, but Linux boxes are painfully stateful so if the VPN or something else didn't come up, just reboot that thing.

Afterwards, you should be able to connect to the device via WiFi. The defaults are SSID "passy-pi" and password "raspberrypi". Afterwards, your connected device should be transparently routed through the VPN. Sorry, Netflix. 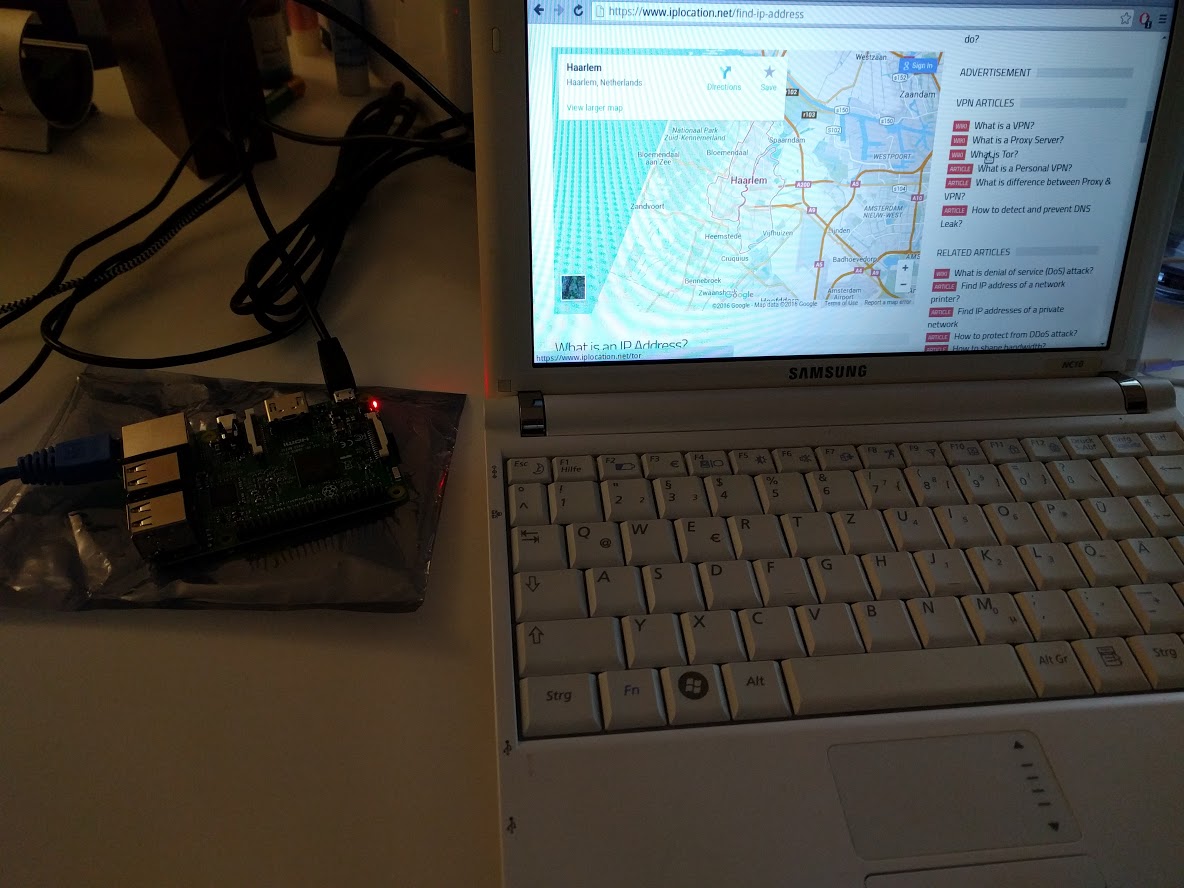 I now have a second ChromeCast that only connects to this AP and hence thinks it's in whatever country I tell it to. Neat.

In case something is wrong with the WiFi and you just want to verify if the routing works, you can add a route manually.

On your target device, assuming it's IPv4:

Updating parts of the config

Something I only found out about when working on this that I should have really known before is that you can selectively run ansible tasks by specifying tags.

If you, for instance, change your VPN settings but don't want to also run an apt-get upgrade you can use the openvpn tag like so:

Multiple tags can be comma-separated.

Certain movie streaming services has gotten a lot more aggressive lately and not only block the usual suspects, but entire fucking IP ranges (both IPv4 and IPv6) for hosting providers like DigitalOcean, AWS and Linode. I wish they had done this a couple of weeks earlier so I could have avoided all the previous work.

But anyway, one so far unaddressed attack vector is using a custom DNS. This even comes with a bunch of benefits like better performance and no traffic limits. And all it takes is a couple of iptables rules to rewrite all DNS requests to those custom servers.

I'm currently testing ViperDNS for just that, which even offers a 7 day free trial.

In order to prepare your Pi for the service, you need to change your playbook.yml ever so slightly. You can either leave the openvpn part out entirely if you've never provisioned your device before or (damn you statefulness) make sure to set openvpn.autostart to none to avoid unnecessarily spinning up instances. Be aware that an empty string here means running daemons for all *.conf files in /etc/openvpn/.

Check out playbook.yml.dnsexample for an example. The interesting bits here are firewall.mode: "dns" rather than "tunnel" which is the default and the force_dns: "185.51.194.194" which overrides all incoming DNS requests (or anything really talking to port 53) to the given IP address.

Afterwards, just replay the playbook and reboot the device.

If you've updated just the DNS redirect and want to skip the other tasks, the tag you want to use is firewall, i.e.