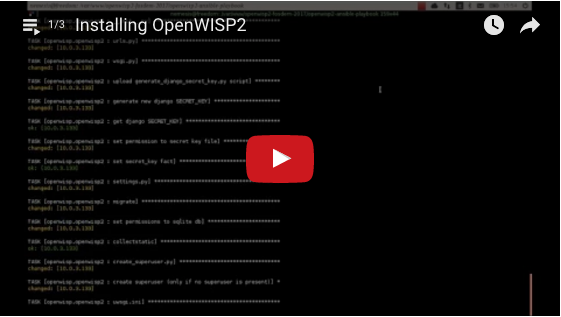 NOTE: it is highly suggested to use this procedure on clean virtual machines or linux containers.

If you are fond of Python, Django and Unix/Linux systems, you may find interesting to know more about what happens under the hood in OpenWISP 2. 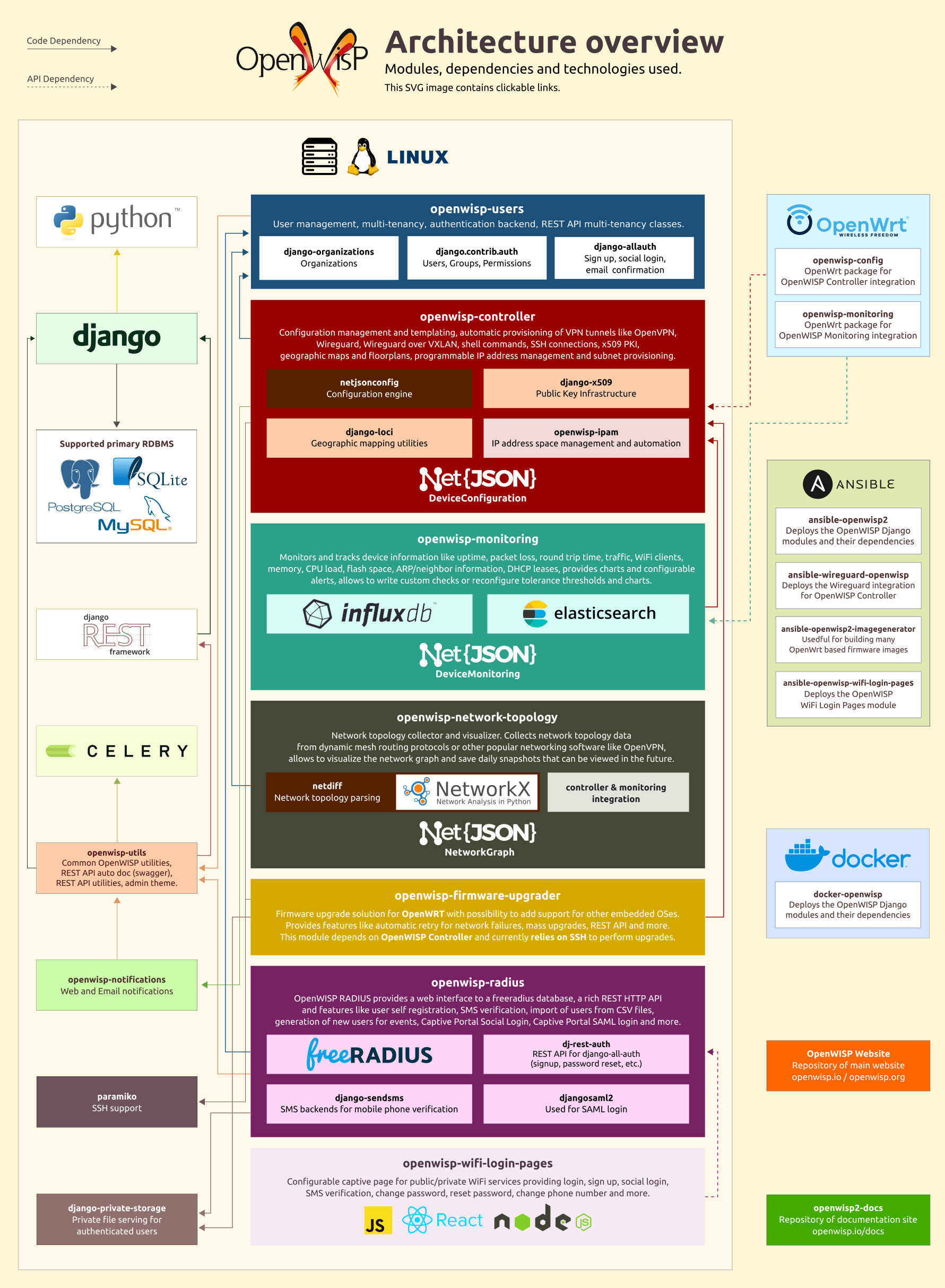 For more information see also Applying the Unix Philosophy to Django projects: a report from the real world.

The following specifications will run a new, empty instance of OpenWISP. Please ensure you account for the amount of disk space your use case will require, e.g. allocate enough space for users to upload floor plan images.

Generally a fresh installation of one of the supported operating systems is sufficient; no pre-configuration required. The Ansible Playbook will install and configure all dependencies and leave you with a running OpenWISP installation.

Tips: Ensure the hostname of your target machine matches what is in your Ansible configuration file. Also, please ensure that Ansible can access your target machine by SSH, be it either with a key or password. For more information see the Ansible Getting Started Documentation.

See the section "OS Platforms" on the ansible-galaxy page of ansible-openwisp2.

If you don't know how to use ansible, don't panic, this procedure will guide you towards a fully working basic openwisp2 installation.

If you already know how to use ansible, you can skip this tutorial.

First of all you need to understand two key concepts:

Ansible is a configuration management tool that works by entering production servers via SSH, so you need to install it and configure it on the machine where you launch the deployment and this machine must be able to SSH into the production server.

Ansible will be run on your local machine and from there it will connect to the production server to install openwisp2.

Install ansible (version 2.5 or higher) on your local machine (not the production server!) if you haven't done already.

To install ansible we suggest you follow the official ansible installation guide.

After having installed ansible, you need to install git (example for linux debian/ubuntu systems):

For the sake of simplicity, the easiest thing is to install this role on your local machine via ansible-galaxy (which was installed when installing ansible), therefore run:

Choose a working directory on your local machine where to put the configuration of openwisp2.

This will be useful when you will need to upgrade openwisp2.

Putting this working directory under version control is also a very good idea.

The inventory file is where group of servers are defined. In our simple case we can get away with defining just one group in which we will put just one server.

Create a new file called hosts in your local machine's working directory (the directory just created in the previous step), with the following contents:

Create a new playbook file playbook.yml on your local machine with the following contents:

The line become: "{{ become | default('yes') }}" means ansible will use the sudo program to run each command. You may remove this line if you don't need it (eg: if you are using the root user on the production server).

You may replace openwisp2 on the hosts field with your production server's hostname if you desire.

Substitute [email protected] with what you deem most appropriate as default sender for emails sent by OpenWISP 2.

Now is time to deploy openwisp2 to the production server.

Run the playbook from your local machine with:

The -k argument will need the sshpass program.

You can remove -k, --become and -K if your public SSH key is installed on the server.

Now proceed with the following steps:

Now you are ready to start configuring your network! If you need help you can ask questions on one of the official OpenWISP Support Channels.

If you need to modify the logic of this ansible role and you need to test your changes here we explain how to do it.

First of all, create the directory where you want to place the repositories of the ansible roles and create directory roles.

From here on you can follow the instructions available at the following sections:

How to run tests

If you want to contribute to ansible-openwisp2 you should run tests in your development environment to ensure your changes are not breaking anything.

To do that, proceed with the following steps:

If you haven't installed docker yet, you need to install it (example for linux debian/ubuntu systems):

If you don't get any error message it means that the tests ran successfully without errors.

Install OpenWISP2 for testing in a VirtualBox VM

If you want to try out OpenWISP 2 in your own development environment, the safest way is to use a VirtualBox Virtual Machine (from here on VM).

To use this new way, clone the repository vagrant-openwisp2, it contains the instructions (in the README.md) and the vagrant configuration to perform the automatic installation.

Alternatively, you can read on to learn how to install VirtualBox and run ansible-openwisp2 manually, this is useful if you need to test advanced customisations of OpenWISP.

Install VirtualBox and create a new Virtual Machine running Debian 10. A step-by-step guide is available here, however we need to change a few things to get ansible working.

Proceed with the installation as shown in the guide linked above, and come back here when you see this screen: 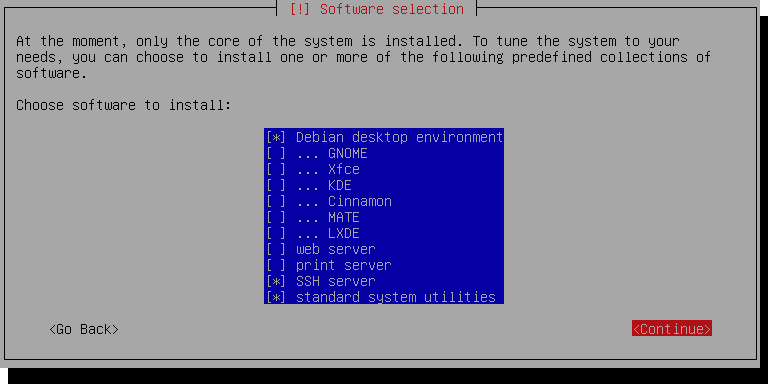 We're only running this as a server, so you can uncheck Debian desktop environment. Make sure SSH server and standard system utilities are checked.

Next, add a Host-only Network Adapter and assign an IP address to the VM.

Make sure you can access your VM via ssh:

Back to your local machine

Proceed with these steps in your local machine, not the VM.

Step 3: Set up a working directory

Create an ansible inventory file named hosts in your working directory (i.e. not in the VM) with the following contents:

In the same directory where you created the host file, create an empty file named playbook.yml which contains the following:

When the playbook ran successfully, you can log in at:

To enable the network topology module you need to set openwisp2_network_topology to true in your playbook.yml file. Here's a short summary of how to do this:

Note: It is encouraged that you read the quick-start guide of openwisp-firmware-upgrader before going ahead.

To enable the firmware upgrader module you need to set openwisp2_firmware_upgrader to true in your playbook.yml file. Here's a short summary of how to do this:

If encounter any issue, you can check the logs of OpenWISP 2 at /opt/openwisp2/log (unless you changed the openwisp2_path variable in the ansible playbook configuration).

If you keep the untrusted certificate, you will also need to disable SSL verification on devices using openwisp-config by setting verify_ssl to 0, although I advice against using this kind of setup in a production environment.

This section explains how to automatically install and renew a valid SSL certificate signed by letsencrypt.

The first thing you have to do is to setup a valid domain for your openwisp2 instance, this means your inventory file (hosts) should look like the following:

Once your domain is set up and the DNS record is propagated, proceed by installing the ansible role thefinn93.letsencrypt:

Then proceed to edit your playbook.yml so that it will look similar to the following example:

Fill a real email address in place of <YOUR_EMAIL_HERE>, it may be used by letsencrypt to send you important communications regarding your SSL certificate.

Once you have set up all the variables correctly, run the playbook again.

Update this ansible-role via ansible-galaxy:

You may also run the playbook automatically periodically or when a new release of OpenWISP2, for example, by setting up a continuous integration system.

This role has many variables values that can be changed to best suit your needs.

Below are listed all the variables you can customize (you may also want to take a look at the default values of these variables).