massiv is a Haskell library for array manipulation. Performance is one of its main goals, thus it is capable of seamless parallelization of almost all of operations.

The name for this library comes from the Russian word Massiv (Масси́в), which means an Array.

Everything in the library revolves around an Array r ix e - a data type family for anything that can be thought of as an array. The type variables, from the end, are:

Creating a delayed type of array allows us to fuse any future operation we decide to perform on it. Let's look at this example:

Here we created a delayed vector of size 10, which is in reality just an id function from its index to an element (see the Computation section for the meaning of Seq). So let's go ahead and square its elements

It's not that exciting, since every time we call evaluate' it will recompute the element, every time, therefore this function should be avoided at all costs. Instead we can use all of the functions that take Source like arrays and then fuse that computation together by calling compute, or a handy computeAs function and only afterwards apply an index' function or its synonym: (!). Any delayed array can also be reduced using one of the folding functions, thus completely avoiding any memory allocation, or converted to a list, if that's what you need:

There is a whole multitude of ways to construct arrays:

It's worth noting that, in the next example, nested lists will be loaded into an unboxed manifest array and the sum of its elements will be computed in parallel on all available cores.

The above wouldn't run in parallel in ghci of course, as the program would have to be compiled with ghc using -threaded -with-rtsopts=-N flags in order to use all available cores. Alternatively we could do compile with the -threaded flag and then pass the number of capabilities directly to the runtime with +RTS -N<n>, where <n> is the number of cores you'd like to utilize.

The main Ix n closed type family can be somewhat confusing, but there is no need to fully understand how it works in order to start using it. GHC might ask you for the DataKinds language extension if IxN n is used in a type signature, but there are type and pattern synonyms for the first five dimensions: Ix1, Ix2, Ix3, Ix4 and Ix5.

There are three distinguishable constructors for the index:

Here is how we can construct a 4-dimensional array and sum its elements in constant memory:

There are quite a few helper functions that can operate on indicies, but these are only needed when writing functions that work for arrays of arbitrary dimension, as such they are scarcely used:

All of the Ix n indices are instances of Num so basic numeric operations are made easier:

It is important to note that the size type is distinct from index by the newtype wrapper Sz ix. There is a constructor Sz, which will make sure that none of the dimensions are negative:

Same as with indicies, there are helper pattern synonyms: Sz1, Sz2, Sz3, Sz4 and Sz5.

As well as the Num instance:

Alternatively tuples of Ints can be used for working with Arrays, up to and including 5-tuples (type synonyms: Ix2T - Ix5T), but since tuples are polymorphic it is necessary to restrict the resulting array type:

There are helper functions that can go back and forth between tuples and Ix n indices.

In order to get a subsection of an array there is no need to recompute it, unless we want to free up the no longer memory, of course. So, there are a few slicing, resizing and extraction operators that can do it all in constant time, modulo the index manipulation:

As you might suspect all of the slicing, indexing, extracting, resizing operations are partial, and those are frowned upon in Haskell. So there are matching functions that can do the same operations safely by using MonadThrow and thus returning Nothing, Left SomeException or throwing an exception in case of IO on failure for example

In above examples we first take a slice at the 4th page (index 3, since we start at 0), then another one at the 2nd row (index 1). While in the last example we also take 1st element at position 0. Pretty neat, huh? Naturally, by doing a slice we always reduce dimension by one. We can do slicing from the outside as well as from the inside:

Or we can slice along any other available dimension:

In order to extract sub-array while preserving dimensionality we can use extract or extractFromTo.

There is a data type Comp that controls how elements will be computed when calling the compute function. It has a few constructors, although most of the time either Seq or Par will be sufficient:

Just to make sure a simple novice mistake is prevented, which I have seen in the past, make sure your source code is compiled with ghc -O2 -threaded -with-rtsopts=-N, otherwise no parallelization and poor performance are waiting for you. Also a bit later you might notice the {-# INLINE funcName #-} pragma being used, often times it is a good idea to do that, but not always required. It is worthwhile to benchmark and experiment.

Instead of manually iterating over a multidimensional array and applying a function to each element, while reading its neighboring elements (as you would do in an imperative language) in a functional language it is much more efficient to apply a stencil function and let the library take care of all of bounds checking and iterating in a cache friendly manner.

What's a stencil? It is a declarative way of specifying a pattern for how elements of an array in a neighborhood will be used in order to update each element of that array. In massiv a Stencil is a function that can read the neighboring elements of the stencil's center (the zero index), and only those, and then outputs a new value for the center element. 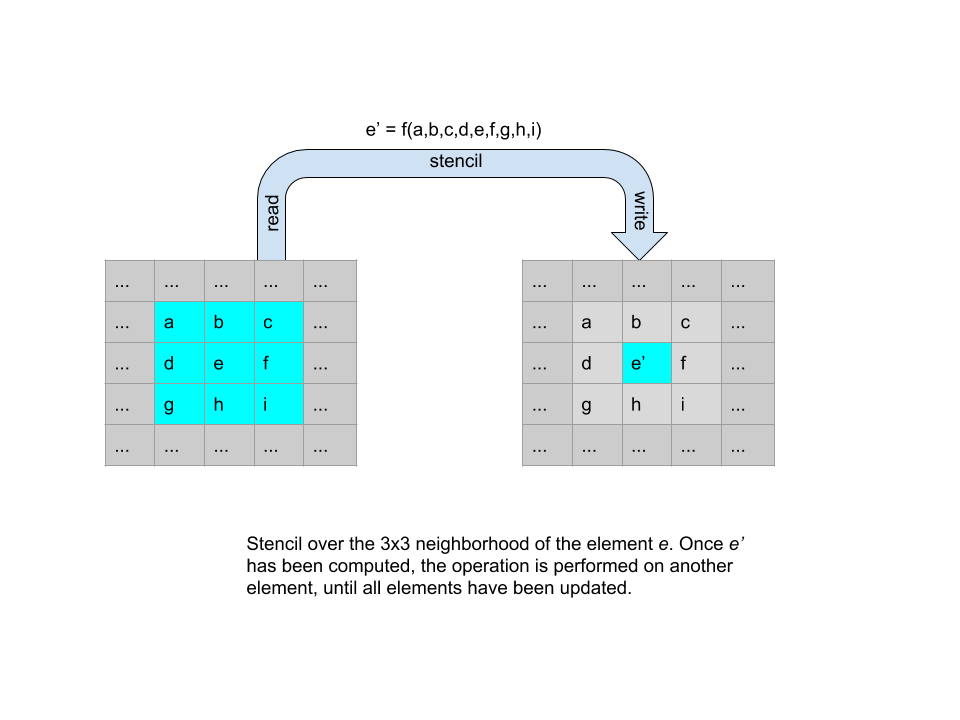 Let's create a simple, but somewhat meaningful array and create an averaging stencil. There is nothing particular about the array itself, but the filter is a stencil that sums the elements in a Moore neighborhood and divides the result by 9, i.e. finds the average of a 3 by 3 square.

Here is what it would look like in GHCi. We create a delayed array with some funky periodic function, and make sure it is computed prior to mapping an average stencil over it:

As you can see, that operation produced an array of some weird representation DW, which stands for Delayed Windowed array. In its essence DW is an array type that does no bounds checking in order to gain performance, except when it's near the border, where it uses a border resolution technique supplied by the user (Edge in the example above). Currently it is used only in stencils and not much else can be done to an array of this type besides further computing it into a manifest representation.

This example will be continued in the next section, but before that I would like to mention that some might notice that it looks very much like convolution, and in fact convolution can be implemented with a stencil. There is a helper function makeConvolutionStencil that lets you do just that. For the sake of example we'll do a sum of all neighbors by hand instead:

There is not a single plus or multiplication sign, that is because convolutions is actually summation of elements multiplied by a kernel element, so instead we have composition of functions applied to an offset index and a multiplier. After we map that stencil, we can further divide each element of the array by 9 in order to get the average. Yeah, I lied a bit, Array DW ix is an instance of Functor class, so we can map functions over it, which will be fused as with a regular Delayed array:

If you are still confused of what a stencil is, but you are familiar with Conway's Game of Life this should hopefully clarify it a bit more. The function life below is a single iteration of Game of Life:

In order to do anything useful with arrays we need to be able to read some data from a file. Considering that most common array-like files are images, massiv-io provides an interface to read, write and display images in common formats using Haskell native JuicyPixels and Netpbm packages.

There is also a variety of colorspaces (or rather color models) and pixel types that are currently included in this package, which will likely find a separate home in the future, but for now we can ignore those colorspaces and pretend that Pixel is some magic wrapper around numeric values that this package is capable of reading/writing.

The previous example wasn't particularly interesting, since we couldn't visualize what is actually going on, so let's expend on it: 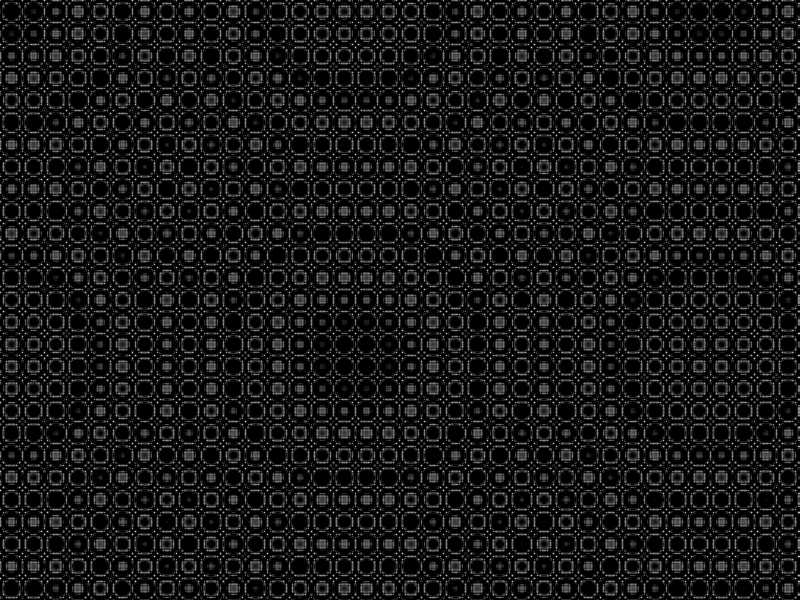 The full example is in the vision package and if you have stack installed you can run it as:

A natural question might come to mind: Why even bother with a new array library when we already have a few really good ones in the Haskell world? The main reasons for me are performance and usability. I personally felt like there was much room for improvement even before I started work on this package, and it seems as it turned out to be true. For example, the most common goto library for dealing with multidimensional arrays and parallel computation is Repa, which I personally was a big fan of for quite some time, to the point that I even wrote a Haskell Image Processing library based on top of it.

Here is a quick summary of how massiv compares to Repa so far:

As far as usability of the library goes, it is very subjective, thus I'll let you be a judge of that. When talking about performance it is the facts that do matter. Thus, let's not continue this discussion in pure abstract words, below is a glimpse into benchmarks against Repa library running with GHC 8.2.2 on Intel® Core™ i7-3740QM CPU @ 2.70GHz × 8

Sum over an array with a left fold: