Common useful algorithms written in modern, pretty and easy-to-understand Javascript along with real-world usage examples. Implementations are in standard ES6 Javascript with the addition of Typescript type annotations for better clarity.

All the algorithms are also tested using Jest with the help of custom beautiful snapshots. 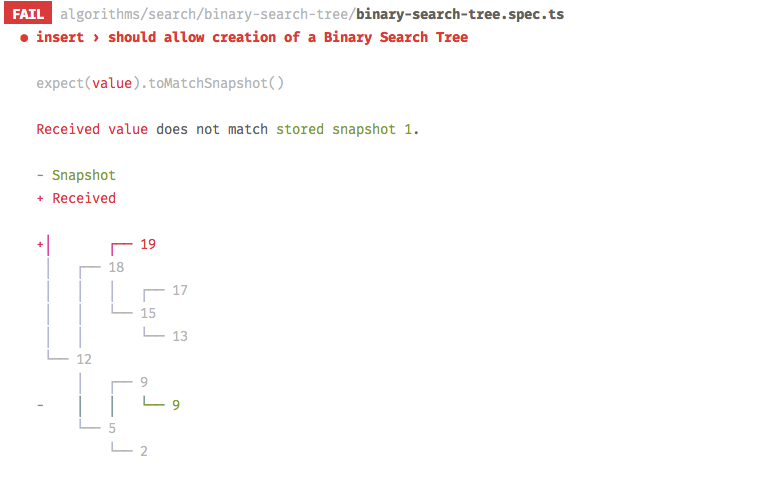 The purpose of this repository is to show algorithms written using declarative and intuitive code as much as possible. It's not meant to be used as production. Clarity and simplicity is favored over performance.

If you need something absolutely performant in production try checking felipernb/algorithms.js with low-level optimisations.

You can play around with the code cloning the repo and running the following commands:

Play around with the source code, the tests and learn algorithms! You can also run the following command to put tests in watch mode and auto-run with changes. Jest CLI output is awesome! 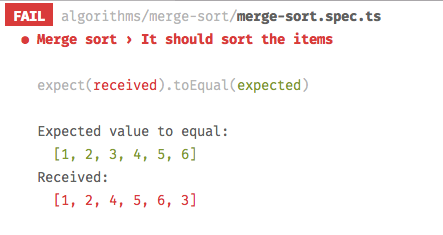 Some real-world usage of the algorithms to show when they can be applied.

The activity selection problem is the selection of non-conflicting activities to perform within a given time frame, given a set of activities each marked by a start time (s[i]) and finish time (f[i]).

A classic application of this problem is in scheduling a room for multiple competing events, each having its own time requirements (start and end time), and many more arise within the framework of operations research. Source

The change-making problem addresses the question of finding the minimum number of coins (of certain denominations) that add up to a given amount of money.

The change-making problem is a knapsack type problem, and has applications wider than just currency. It can be used whenever there is the need to calculate the minimum set of items to add up to a value.

An application of change-making problem can be found in computing the ways one can make a nine dart finish in a game of darts. Source

A Huffman code is a particular type of optimal prefix code that is commonly used for lossless data compression.

The Huffman coding is often used as a "back-end" to other compression methods. DEFLATE (PKZIP's algorithm) and multimedia codecs such as JPEG and MP3 have a front-end model and quantization followed by the use of prefix codes. Source

The longest common subsequence problem is the basis of data comparison programs such as the diff utility and has applications in bioinformatics (sequences of DNA).
It is also widely used by revision control systems such as Git for reconciling multiple changes made to a revision-controlled collection of files. Source

The LCS problem is also the base of the edit-distance problem, which quantifies how dissimilar two strings are to one another.
An application of the latter could avoid some security problems, as happened to NPM: crossenv malware on the npm registry.

Find the contiguous subarray within an array of numbers which has the largest sum.

The Maximum subarray problem is useful to find the range of maximum in a period of events, such as the best moment to buy and sell stock assets knowing their value in a period of time. Another example:

You have a list of income details for each month of the company ACME for a year of 2016…you have to find out in which part of year the company earns more income and how much it earns. Source

This algorithm also has been applied to radio telescope images acquired for the Australian square kilometer array pathfinder project. This paper provides an overview of the maximum subarray algorithm and shows how this can be utilized for optical and radio telescope applications. Source

A priority queue can be used for Bandwidth management, Discrete event simulation, Dijkstra's algorithm and so on. Open the source for more details.

Find the best way to cut a rod of length n, assuming that each length has a price. Find best set of cuts to get maximum price.

The Rod cutting problem can be used to maximize a profit whenever the resources can be divided into minor quantities and sold separately. Useful, isn't it?

Binary search is a search algorithm that finds the position of a target value within a sorted collection.

Some applications of Binary search:

Many computer scientists consider sorting to be the most fundamental problem in the study of algorithms. There are several reasons:

Check instead this article about pros and cons of each sorting algorithms.

Get A Weekly Email With Trending Projects For These Topics
No Spam. Unsubscribe easily at any time.
typescript (10,876)
algorithms (443)
computer-science (160)
sort (93)
sorting-algorithms (55)