With gong, a web application is a set of stacks. Each stack is based on go and angular. Each stack has its own data model.

Gong is a work in progress. API of the framework is not yet stabilized/baselined

The unit of development in gong is the gong stack (a "stack" in the rest of this document). A stack can import other stacks (both the front end and the back end of a stack are integrated as a whole). The granularity of a stack is similar to an angular components. There are available stacks for jointjs and leaflet.

Gong fullstack approach was inspired by Ruby on Rails and a more generaly the idea that complexity facing the programmer should be carefuly managed, as it is described in conceptual compression concept and Rob Pike's design of Go regarding complexity.

Gong fullstack approach, with a backend in go, is similar in intent to lorca, wails and fyne. However, the gong framework approach is different because it includes gongc, a go data model compiler to generate front-end and back-end code. In this sense, it is similar to ent which includes a ("shema as code") approach.

Gong's goal is the rapid development of web applications for system engineering, a go low-code alternative to Excel+visual basic.

Mostly, gong is for modeling and simulation, planning and project structuring developments. Those developments are made during the developement of the system of interest, therefore the need for fast iterations (see paper for details on this goal).

go version equal or above 1.19 is mandatory (cf. use of embed package & generics). See https://golang.org for installation.

Gong uses sqlite3 in a cgo free configuration by default.

go-swagger is a go program that is used (as an option) after each gongc compilation to generate the project API in a yml file. gongc is robust to the absence of go-swagger but it is recommanded to use it if you need to document the back-end API with yaml.

Vscode is usefull & handy because the tasks definitions and debug configuration related to gong are provided in the repository.

the test directory contains a stack wit the generated code.

Then, browse to localhost:8080 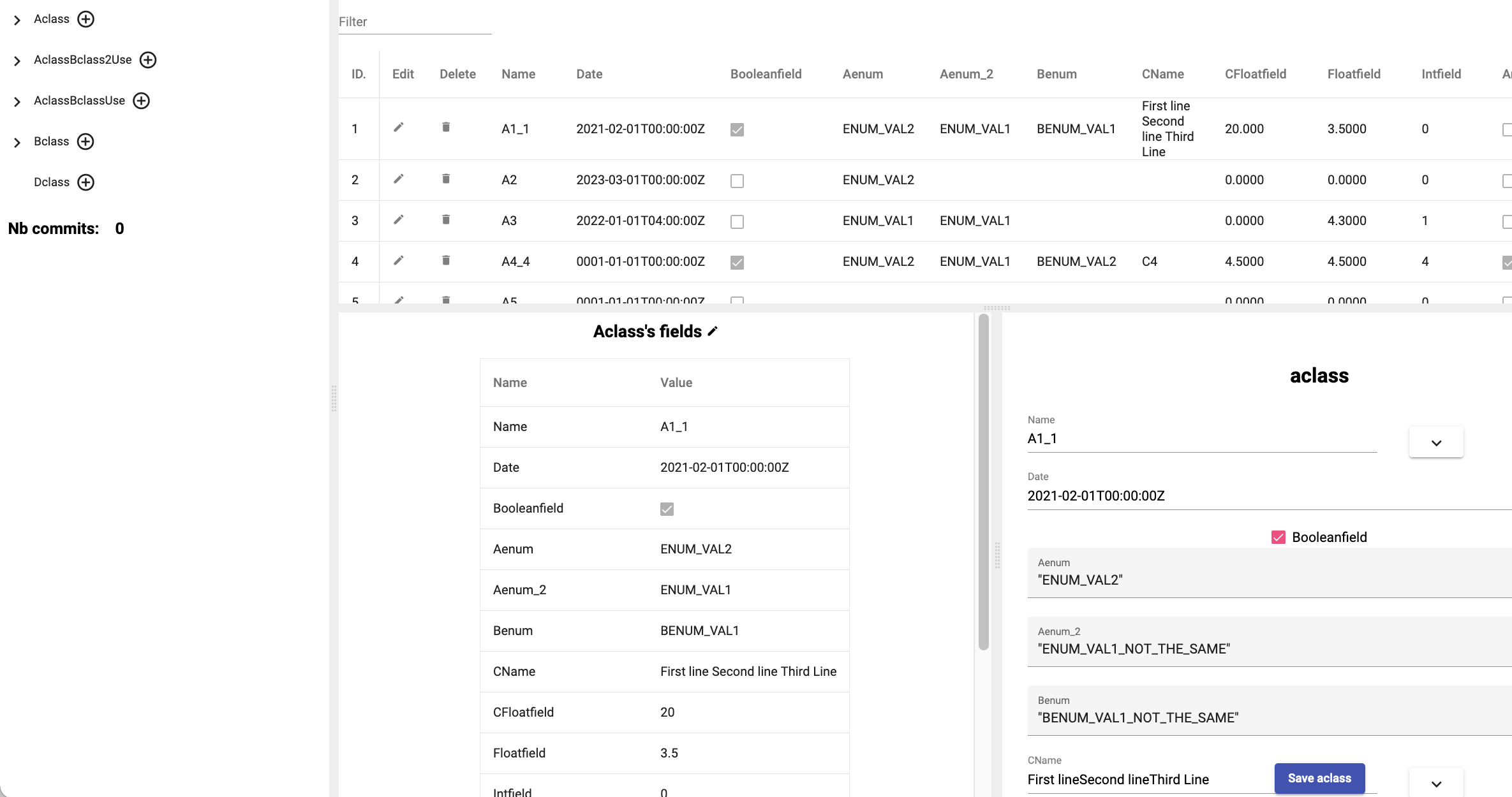 Example of a generated application with gong

2.2. Testing the generation of the code

From the root directory.

A gong application is a stack that can integrate other stacks. Below is a list of stacks that can be reused.

https://awesomeopensource.com/project/fullstack-lang/gongdoc, a UML editor (based on jointjs) for documenting a gong model. gongdoc uses the gong stack.

https://awesomeopensource.com/project/fullstack-lang/gongsim, a stack for developping simulations

https://awesomeopensource.com/project/fullstack-lang/gongleaflet, a stack for developping application with leaflet carto components

https://awesomeopensource.com/project/fullstack-lang/gongsvg, a stack for developping application with svg graphical components

https://awesomeopensource.com/project/fullstack-lang/helloworld is a recommanded starting point for understanding gong.

https://awesomeopensource.com/project/fullstack-lang/bookstore is a little more sophisticated example than helloworld.

https://awesomeopensource.com/project/fullstack-lang/laundromat, is a more sophisticated example. It is a simulation stack that reuses 3 other stacks (gong, gongsim, gongdoc)

3.1. Gong is a go sub langage for generating a full stack

Gong is a sublangage of go. It is comprised of one or many gongstruct and gongenum. The gongc compiler is based on the go compiler.

A gong project is a go module with a unique name (for instance github.com/fullstack-lang/gongdoc). gongstruct and gongenum have to be present in the go/models sub package.

A gongstruct is a go struct with a Name field.

A gongenum is a go string with some const values. The string type must be commented with // swagger:enum

3.2. Back end SQL and go code from gong code

However, gorm is still a concept you need to know to program the database in go. gong allows to ignore this conceptual layer since the gorm code is generated. Indeed, the gongc compiler compiles the models (the go/models package) to generate the appropriate gorm code (in the go/orm package). Therefore, gong is another conceptual compression to avoid programming gorm code.

The gin framework is an API for programming the controllers that implement the REST web service of the application. gin acts as a conceptual compression since it provides a high level concept to program the REST api.

However, you need to know to program gin for implementing the REST api. gong allows to ignore this conceptual layer since the gin code is generated by gong. The gongc compiles compiles the models (the go/models package) to generate the appropriate gin code (in the go/controllers package)

Angular framework is an API for programming front-end of the application.

gongc compiles the models (the go/models package) to generate the appropriate angular code (in the ng/projects/<name of the package> angular workspace). This code provides an API to the front end code that follows the data models of the the go/models package.

Each gongstruct/gongenum is compiled into an appropriate typescript code.

Angular Material is a set of front-end Angular components.

gongc compiles the models (the go/models package) to generate the appropriate angular material code, in the ng/projects/<name of the package> angular workspace :

Putting data to the database and retrieving data from the database (CRUD operations) is performed via an API that is generated for each gongstruct.

This is done thank the go module. For the go code, it is the standard way of managing dependencies. For the angular/typescript/js code, it is done in four steps.

First, gong uses the go embed fearure that allows, by using four lines of go in a file stored in the angular workspace to directory,

that the code in the angular workspace projects directory is stored into the go module.

The second step is to import the created ng package in the project that will use the stack. For instance, the following line makes avaible the Project directory to the project.

The third step is another go feature, the go mod vendor command, that makes available the source code of all dependencies in a vendor directory simply by issuing the command. Then, the angular code is now in the directory vendor/github.com/fullstack-lang/gongjointjs/ng.

The four step is to define your front-end dependency by using the tsconfig.json file and point it the to import path into the vendor directory (instead of using the installation by npm install of the imported front code module). you are therefore assured that your back-end code and front-end code belong to the same configuration. (see the https://github.com/fullstack-lang/gongproject/blob/master/ng/tsconfig.json for an example of tsconfig.json configuration).

Gong's goal is to speed up development of full stack applications. Gong's goal is therefore to allow fast iterations of the database model and content/database.

when refactoring the code, the generated go code is refactored. Therefore, no need to manualy refactor the data.

If prerequisite and gongc are installed, it is possible to generate a functionning stack in 5 minutes.

4.1. Generating the code with the gongc command

In a terminal, below commands :

Then, browse to localhost:8080 and add data manualy.

With the option -marshallOnCommit=stage, a stage.go file is generated as each save operation (along the default sqlite database test.db). When the application is restarted with the --unmarshall=stage , the data is injected from the stage.go file, not from the database.

4.2. Timing of the gongc command

The backend of a gong application is a REST server (thanks to gin). You can interact with the server via REST calls.

For instance, if you start from an empty database, the following commands will inject proprer data.