GoTrace is a 3D WebGL visualizer of Go concurrency. It analyzes trace produced by go tool trace and renders visualization of concurrency flow. 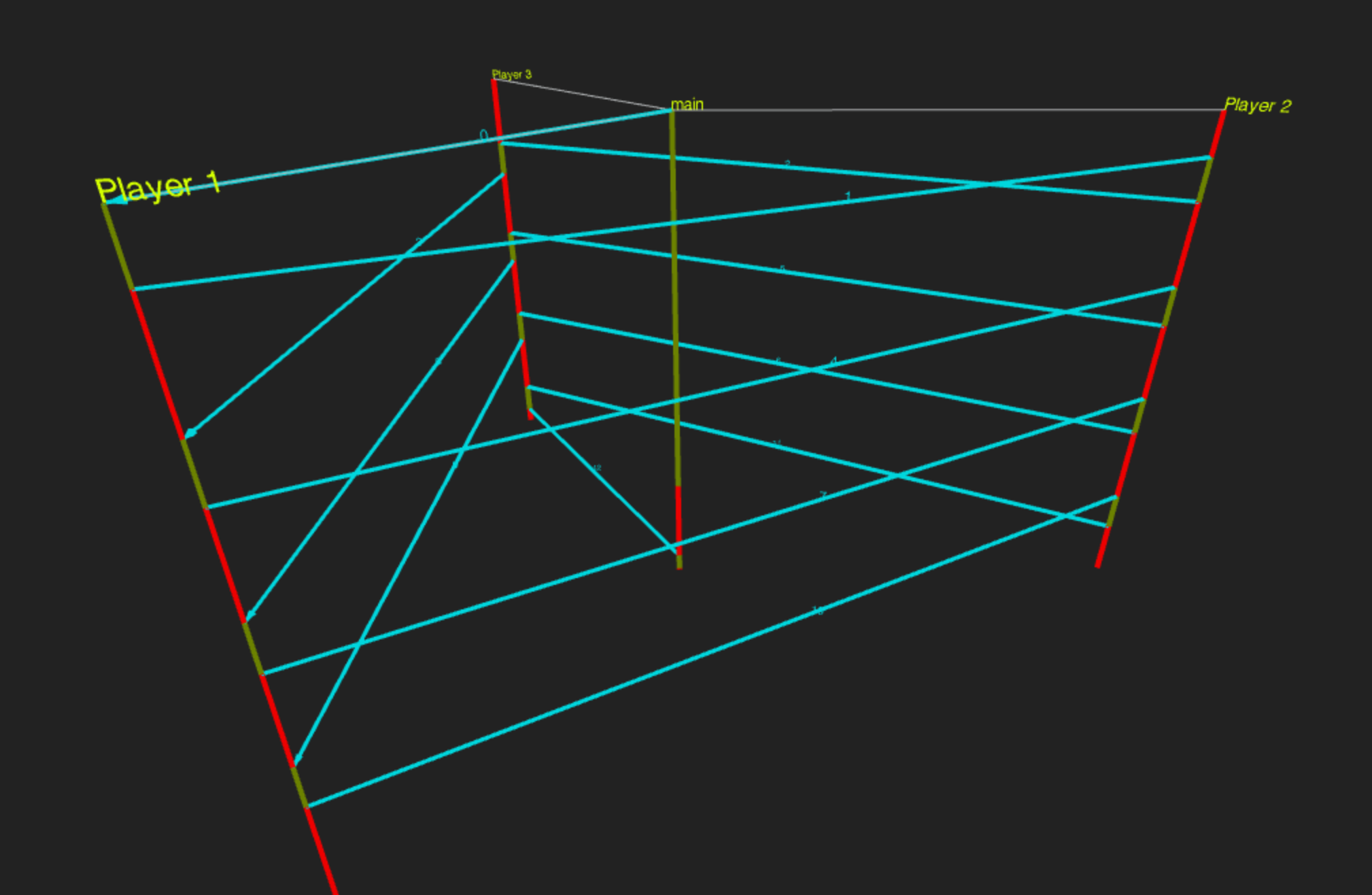 This tool generates 3D visualization of Go concurrency flow by analyzing its execution trace. To view the visualization you need a modern browser with WebGL support (pretty much any browser nowadays).

Its primary goal is to be an educational tool for Go concurrency. It works well with small programs that produce short traces (see Scale issues below).

Second, use patched Go runtime to produce trace and binary. There are two ways to do it - use a docker container or apply the patch locally.

Now, please learn some important things before trying your own code. Feel free to play first with code in examples/ folder.

Theoretically, gotrace should do all the magic itself and be able to handle any Go program. That's the goal, but at the present moment, if you want to get good/meaningful visualization, you should follow some rules and suggestions.

The height of program visualization currently is a fixed value, so any trace fits into the screen height. This means, that example running 1 minute will be visualized at different scale from program running 1 second.

Depending on what you try to see, but rule of thumb is - the shorter execution time, the better. See examples/ dir for good samples that produce nice visualizations.

In order to produce the trace, your program should be instrumented with special code. gotrace can do this automatically for you, but in some cases it's wiser to put this code by yourself. Here is a typical example:

Currently it's important to write trace into os.Stderr. See issue #X if your example uses stderr for other needs.

If you are trying to visualize some things that happen at nanosecond/microsecond level, it could be wise to insert time.Sleep(1 * time.Millisecond) calls to get more clear visualization.

For example, if your code runs 100 goroutines in a loop, their IDs and their start order probably would be different, resulting in slightly messed picture. So, changing:

will help to make better visualization.

The fewer objects that will be rendered, the better. If you have many things to render, WebGL will just hang your browser. Also, keep in mind, that point of visualization is to express something. So running 1024 workers will result in a heavy visualization where you will not see separate goroutines. Setting this value to, say, 36 will produce much more clear picture.

The next step is to build your program. You will need to build using the patched Go runtime. So if you patched it yourself (see Appendix A), you just have to run go build, or, even simpler, let gotrace do it for you. But most people, probably wouldn't want to do this and prefer using Docker for it.

You will need Docker installed and running.

Then pull the image from Docker Hub:

or build it yourself:

If everything went ok, you should have divan/golang:gotrace image in your local docker (check with docker images command).

Now, use this command to produce the binary:

Once you have the binary, you can run it and save the trace:

Now, it's time to run gotrace and feed the binary and the trace to produce the visualization:

It should start the browser and render visualization.

Colors of goroutines' connections and sendings over the channels are the same.

You may also try it with a Leap Motion controller for zooming and rotating with hands - switch to leap branch.

Also there are some useful hotkeys:

If you really want to play around with gotrace, you may want to patch Go runtime yourself. It will allow you to run gotrace as easy as gotrace main.go without all intermediate steps described above.

Here are instructions on how to do it (MacOS X and Linux).

or (assuming your PATH set to use /usr/local/go)

Now, you should be able to run gotrace main.go and get the result.