Pinpointer is yet another clojure.spec error reporter based on a precise error analysis.

It has the following features:

Notice: Pinpointer is built on top of clojure.spec, which is one of Clojure's new features that have been developed most actively. So, it's still in alpha and its APIs are also subject to change.

Add the following to your :dependencies:

Why and how to use it

clojure.spec provides an API named explain, which describes which portion of the input data caused a spec error:

As you can see above, the result of explain is simple and plain, but it is often not easy to understand intuitively what was wrong. And it will take longer time to find out where the actual problem is as the spec and input data are getting larger.

Pinpointer provides an API compatible with explain, which is named pinpoint, and it shows the spec errors in a visually easy-to-grasp manner:

You can also colorize the error reports by adding the option {:colorize :ansi} to increase the readability: 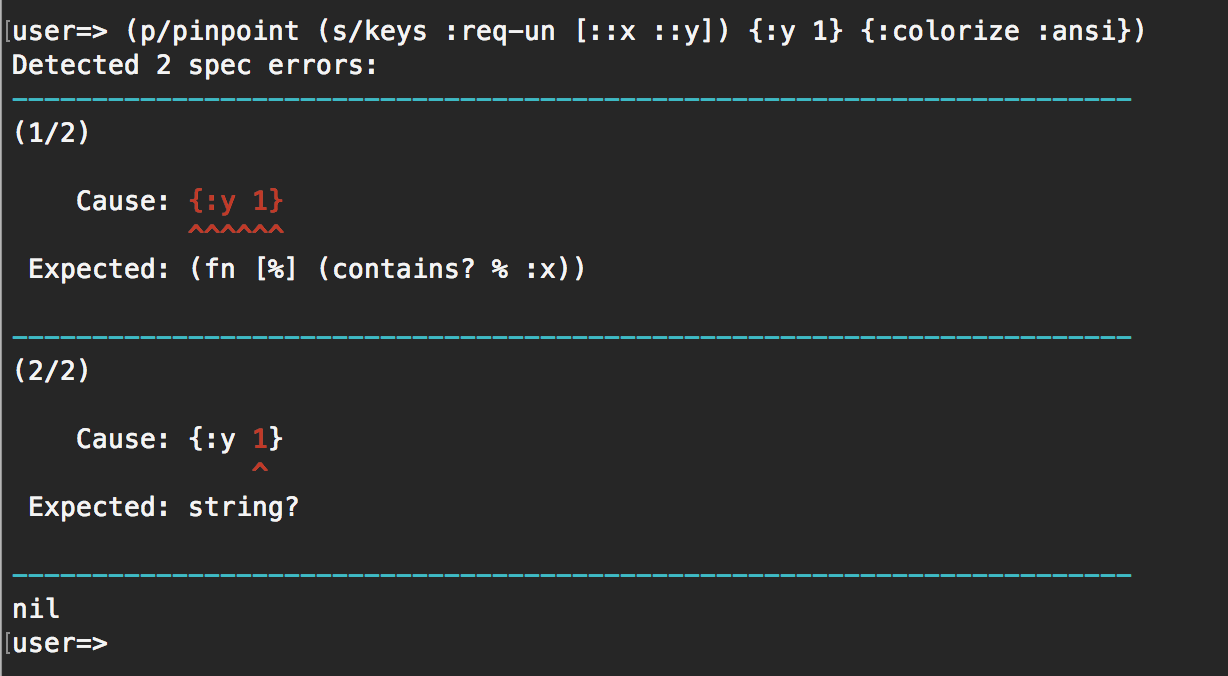 pinpoint has several other options. See the docstring for more details.

If you'd rather completely replace the explain facility for any kinds of spec error reporting, it would be helpful to replace s/*explain-out* with pinpointer.core/pinpoint-out instead:

Pinpointer also supports ClojureScript. Note, however, that it may use eval for its spec error analysis in general (especially, when analyzing specs with a literal fn in them) while ClojureScript doesn't have a platform-independent eval fn.

If you use Pinpointer from a self-hosted ClojureScript implementation equipped with eval such as Planck or Lumo, it should work fine even in general cases as follows:

There are a couple of known issues in Pinpointer, primarily due to clojure.spec's bugs. They can be found on Issues page, being tagged with spec bug.

If you found something wrong when using Pinpointer and you want to report an issue, check whether or not it's already been filed there first.

Distributed under the Eclipse Public License 1.0.