Env File is a plugin for JetBrains IDEs that allows you to set environment variables for your run configurations from one or multiple files.

All formats assume that both keys and values are strings. 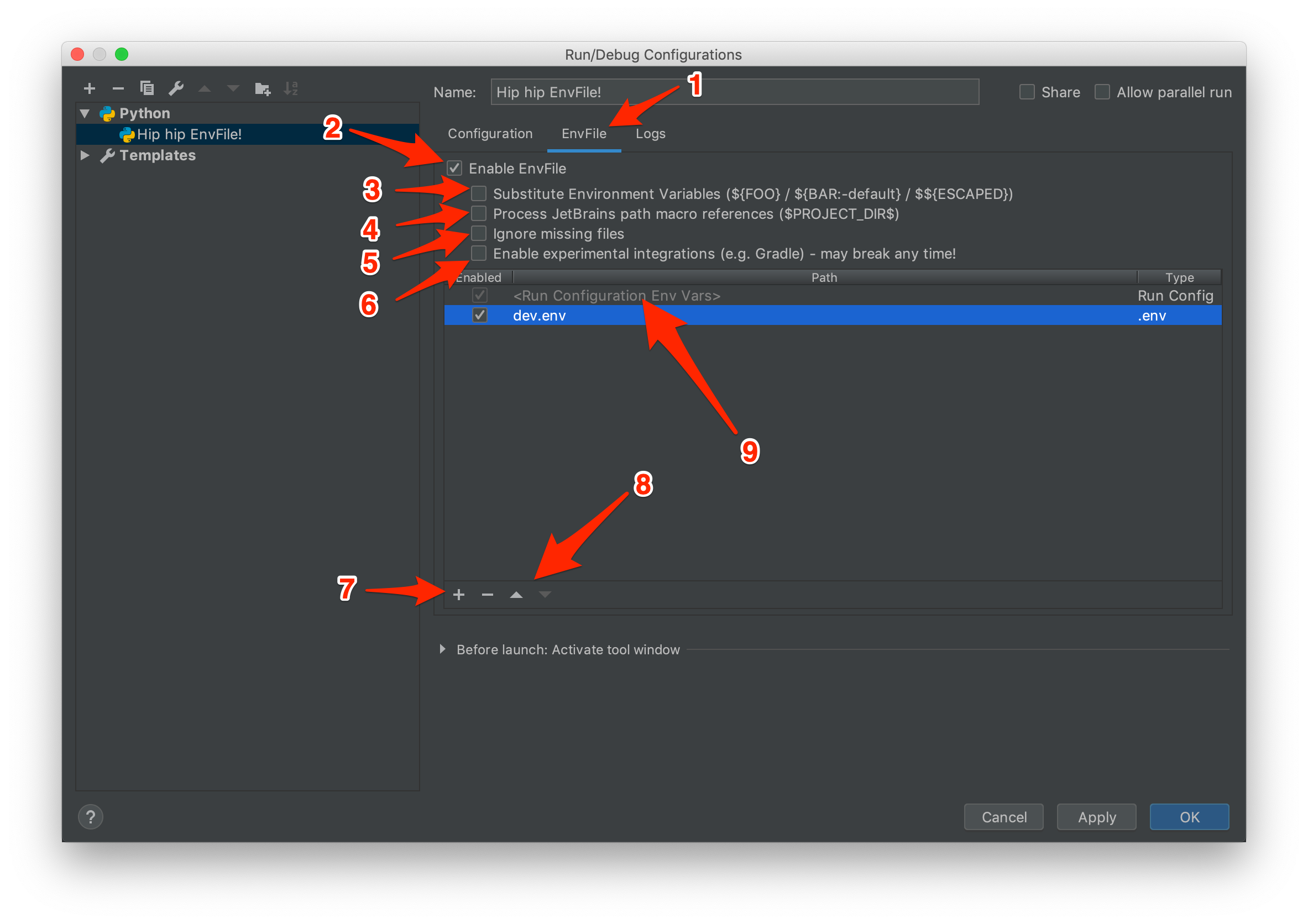 Hidden files (starting with a dot) are not displayed in Finder on macOS by default. To toggle hidden files in the Open dialog, press COMMAND + SHIFT + .. Alternatively, one can either tweak macOS to show hidden files or select any file using standard Finder dialog and then manually edit path by double-clicking on the entry in the table.

Not all run configurations available in IDEA-based IDEs are implemented similarly. Some of them differ significantly. In certain cases (so far, only Gradle has been confirmed) the implementation exposes interfaces to integrate the EnvFile UI but doesn't provide interfaces for it to actually make its work. Luckily, it was possible to make few assumptions about IDEA's internal implementation and make it work. Such integration is very fragile and it's not immediately clear if it will affect any existing integrations and when it will break. For that reason there is a special option to Enable Experimental Integrations that can be enabled when desired and should prevent other integrations from breaking.

There was a number of requests to support extracting environment variables from bash scripts like:

The feasible way to do that is yet to be discovered (if any at all) so the plugin does not support that at the moment. On the other hand there is a simple workaround that can be used for the time being. The example bash script from above can be split into an .env file and a generic script that can be used to set environment variables on a command line:

EnvFile also supports environment variable substitution. It's optional and disabled by default. Implementation is based on StringSubstitutor so it's the best reference for how it works.

Syntax is derived from Bash but is way more primitive:

It is possible to refer to any environment variables that were evaluated previously - within same file or from other sources.

EnvFile can substitute JetBrains path macro references such as $PROJECT_DIR$ etc. It's optional and disabled by default. For details - see "Working with $PROJECT_DIR$ in plugin configuration options".

In order to open plugin's project in IDE one should generate skeleton and then open it and import Gradle project:

This generates a very basic .idea project definition that is sufficient enough to ensure that IDEA would recognize this as a plugin after Gradle import.

Any feedback, bug reports and feature requests are highly appreciated!

Feel free to create an issue, contact me using Github or just drop me an email to the address specified in plugin.xml/idea-plugin/[email protected].