Z3 is a theorem prover from Microsoft Research. It is licensed under the MIT license.

If you are not familiar with Z3, you can start here.

Pre-built binaries for stable and nightly releases are available from here.

Z3 can be built using Visual Studio, a Makefile or using CMake. It provides bindings for several programming languages.

See the release notes for notes on various stable releases of Z3.

Z3 uses C++17. The recommended version of Visual Studio is therefore VS2019.

Note by default g++ is used as the C++ compiler if it is available. If you would prefer to use Clang change the mk_make.py invocation to:

Note that Clang < 3.7 does not support OpenMP.

You can also build Z3 for Windows using Cygwin and the Mingw-w64 cross-compiler. To configure that case correctly, make sure to use Cygwin's own python and not some Windows installation of Python.

A 32 bit build should work similarly (but is untested); the same is true for 32/64 bit builds from within Cygwin32.

By default, it will install z3 executable at PREFIX/bin, libraries at PREFIX/lib, and include files at PREFIX/include, where PREFIX installation prefix is inferred by the mk_make.py script. It is usually /usr for most Linux distros, and /usr/local for FreeBSD and macOS. Use the --prefix= command line option to change the install prefix. For example:

To uninstall Z3, use

To clean Z3 you can delete the build directory and run the mk_make.py script again.

Z3 has a build system using CMake. Read the README-CMake.md file for details. It is recommended for most build tasks, except for building OCaml bindings.

vcpkg is a full platform package manager, you can easily install libzmq with vcpkg.

Z3 itself has few dependencies. It uses C++ runtime libraries, including pthreads for multi-threading. It is optionally possible to use GMP for multi-precision integers, but Z3 contains its own self-contained multi-precision functionality. Python is required to build Z3. To build Java, .Net, OCaml, Julia APIs requires installing relevant tool chains.

You can install a nuget package for the latest release Z3 from nuget.org.

Use the --dotnet command line flag with mk_make.py to enable building these.

These are always enabled.

These are always enabled.

Use the --java command line flag with mk_make.py to enable building these.

Use the --ml command line flag with mk_make.py to enable building these.

Use the --python command line flag with mk_make.py to enable building these.

If you do need to install to a non standard prefix a better approach is to use a Python virtual environment and install Z3 there. Python packages also work for Python3. Under Windows, recall to build inside the Visual C++ native command build environment. Note that the build/python/z3 directory should be accessible from where python is used with Z3 and it depends on libz3.dll to be in the path.

The Julia package Z3.jl wraps the C++ API of Z3. Information about updating and building the Julia bindings can be found in src/api/julia.

A WebAssembly build with associated TypeScript typings is published on npm as z3-solver. Information about building these bindings can be found in src/api/js. 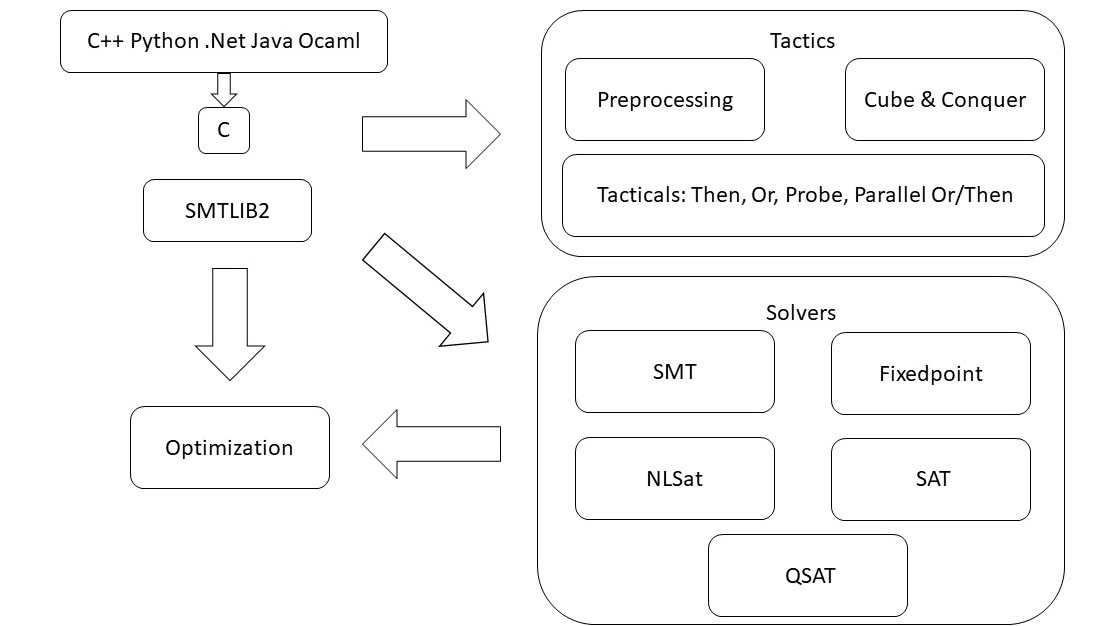