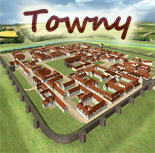 I am helped out by the TownyAdvanced team: Articdive, FlagCourier, Warrior and a few other private members. Being open-source Towny has a large list of Contributors who have helped improve the code base over the years as well.

Towny is one of the oldest still-in-development plugins for Minecraft. Shadeness created Towny for the now-defunct server platform called hMod. Shadeness ported Towny to Bukkit and left the project shortly afterwards, returning later to add EnemyWar or as it became known: FlagWar. Towny is now over 10 years old!

Go check out some of the features Towny has and see why it's still popular for yourself.

Staying up to date

Now that all Release builds and Development builds are being made available here on github's Releases tab I am recommending that server admins "watch" Towny on github. Just click the watch button in the upper right and select "Custom > Releases".

Alternatively, if you watch the resource on Spigot you will be notified on that website when a new Release version is out.

The documentation found on the Towny Wiki is updated every time a Release version of Towny is put out. If you are using a development build it is expected that you have read the changelog for any important changes since the previous Release build.

Some important pages to look over:

If you still need help, join us on the Discord server, where you can find cutting edge updates and discussion on the development of the plugin.

If you want to support the developer consider becoming a Sponsor.

Courtesy of Major_Graft, we have a new series of Tutorial Videos available on the Towny website and YouTube.

If you'd like to contribute to the Towny code, see the CONTRIBUTING.md.

If you'd like to help translating Towny into the available languages or add entirely new languages, we're on Crowdin!

We don't object to you making your own forks and builds but we do object to people being selfish, which is why we specify No Derivative Works. If you want to modify the code to add some nice feature the least you can do is ask and submit a pull request to allow everyone to benefit from it.

Importing Towny for API use

Developers who wish to use the Towny API in their plugins may read the following instructions on adding Towny via a Maven pom.xml.

If you would like to build from a specific branch yourself, you can do so with either Apache Ant or Apache Maven, depending on the age of the branch.

For building, open your terminal / command prompt and navigate to the Towny Directory (either extracted, or cloned).