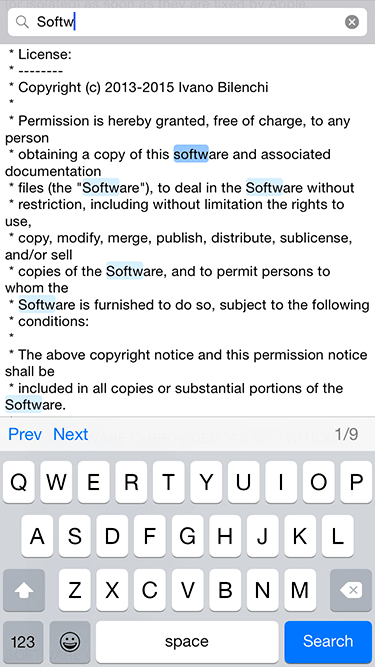 It also features some iOS 7+ specific improvements and bugfixes to the standard UITextView.

Supported iOS SDKs: 5.x and above.

ICTextView can be installed via Cocoapods (just add pod 'ICTextView' to your Podfile, then run pod install) or as a Git submodule.

Alternatively, you can clone this repo, or even just grab the ICTextView folder and put it somewhere in your project.

ICTextView requires the QuartzCore framework, so make sure to link against it in your build settings.

It is an ARC only project, meaning you must compile it with ARC enabled (either globally or specifically for every .m source file in the ICTextView folder).

#import "ICTextView.h" and you're ready to go.

See comments in the #pragma mark - Configuration section of the ICTextView.h header file.

Both search methods are regex-powered, and therefore make use of NSRegularExpressionOptions. They both support animation, range restriction, custom end scroll positioning and forward/backward search direction.

If a match is found, ICTextView highlights a primary match, and starts highlighting other matches while the user scrolls. Searching for the same pattern multiple times automatically matches the next result.

The rangeOfFoundString property contains the range of the current search match. You can get the actual string by calling the foundString method.

The resetSearch method lets you restore the search variables to their starting values, effectively resetting the search. Calls to resetSearch cause the highlights to be deallocated, regardless of the maxHighlightedMatches property.

After this method has been called, ICTextView stops highlighting results until a new search is performed.

This was the default behavior for scrollRangeToVisible: before iOS 7, but it has changed since (possibly because of a bug). These methods support animation and scroll positioning, similarly to the search methods.

The other methods are pretty much self-explanatory. See the #pragma mark - Misc section of the ICTextView.h header file for further info.

These fixes, combined with the custom methods to account for contentInset and textContainerInset, should make working with ICTextView much more bearable than working with the standard UITextView.

Bugfixes introduced by ICTextView will be removed (or isolated) as soon as they are fixed by Apple.

ICTextView is available under the MIT license. See the LICENSE file for more info.