A demo application built on top of Framework7, AngularJS, SASS and TypeScript. Feel free to download, modify, fork or comment. This app will list upcoming and current movies from theaters and give you detailed information

This example is not best practice on how to use Framework7, it’s more of an experiment to see how it works with Angular and TypeScript. Framework7 has an own templating engine called Template7 (and also now supports Vue and React), so Angular is not mandatory. The important part is that F7 is designed to work with JavaScript, rather than TypeScript. So, if you’re new to Framework7, do not assume that this example is the way you should create F7 apps! It was an experiment to see what happens if you combine these technologies.

Also, please keep in mind that this is an old demo based on Angular 1.x. If you like Angular, then I rather recommend to use Ionic since it fully supports Angular2. If you want to use Framework7, then use Framework7-Vue or Framework7-React.

If you feel adventurous enough to dive into this experiement read on :-) 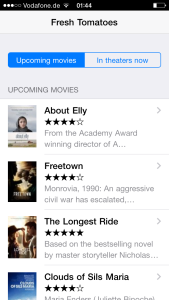 How to do changes

Go to src folder and edit the following files:

Then call grunt compile again and check the result in /build folder.

This app is based on top of this template: https://github.com/valnub/Framework7-Typescript-Template

For some people the template mentioned above is a little to complicated because it relies on npm and grunt. If you want an alternative with just pure html, css and javascript without a build process involved you can try this alternative: https://github.com/valnub/Framework7-Pure-Angular-Template or watch my video screencast tutorial: http://www.timo-ernst.net/blog/2015/11/05/video-screencast-how-to-use-framework7-with-angularjs/

Get A Weekly Email With Trending Projects For These Topics
No Spam. Unsubscribe easily at any time.
javascript (66,042)
deprecated (171)
unmaintained (55)