Witwicky: An implementation of Transformer in PyTorch

UPDATE: Please check out new paper (which is partly based on this work) which has further discussions on TrueRes, NormRes, weight initializations and normalization here paper, code.

An implementation of Vaswani et al.'s Attention Is All You Need with PyTorch. An early version of this code was used in our paper Neural Machine Translation of Text from Non-Native Speakers .

This code has been tested with only Python 3.6 and PyTorch 1.0.

My rule of thumb for data preprocessing (learned from fairseq's code) is:

To train a new model:

During training, the model is validated on the dev set, and the best checkpoint is saved to nmt/saved_models/model_name/model_name-SCORE.pth.

The val_by_bleu option controls whether the best checkpoint is chosen based on dev BLEU score (val_by_bleu=True) or (label-smoothed) dev perplexity (val_by_bleu=False).

The n_best option tells the trainer to save the best n_best checkpoints; however, it's a bug that because of the way the checkpoints are named, if two checkpoints happen to have the same score, the earlier one is overwritten.

Options are set in configurations.py. Many are pretty important.

For low-resource (<500k sentences), try word_drop=0.1, dropout=0.3. For datasets of this size, I find BPE of 8k-12k is enough. Since the vocabulary is small, just set vocab_size and joint_vocab_size to 0 which means to use the full vocabulary. If the source and target languages are similar, such as English and German, such that their subword vocabularies have 90+% overlap, set share_vocab to True.

I find gradient clipping at 1.0 helps stabilize training a bit and yields a small improvement in perplexity, so I always do that.

Long sentences are an important resource for Transformer, since it doesn't seem to generalize well to longer sentences than those seen during training (see Training Tips for the Transformer Model). For this reason, I suggest to set max_train_length to high value such as 1000.

I find fix_norm no longer consistently helps with Transformer + BPE. However, it speeds up training a lot in early epochs and the final performance is either slightly better or the same, so give it a try.

To Norm or Not To Norm

Section 3 of Identity Mappings in Deep Residual Networks suggests that residual connections should be left untouched for healthy back-propagation. I conjecture that this is why doing dropout⟶residual-add⟶layer-norm (left side of above figure, let's call it NormRes) is difficult to train without warmup. On the other hand, with layer-norm⟶dropout⟶residual-add (right side of above figure, let's call it TrueRes), we actually don't need warmup at all.

However, in order to achieve good performance, it is still important to decay the learning rate. We choose to decay if the performance on dev set is not improving over some patience previous validations. We often set patience to 3.

The figure below shows the dev BLEU curve for Hungarian-English (from LORELEI) with different model sizes and different warmup steps. Note that for all TrueRes models we don't do warmup. We can see that while the NormRes learns well with 4 layers, going to 6 layers causes a huge drop in performance. With TrueRes, we can also train a 6-layer model for this dataset which gives almost 2 BLEU gain. 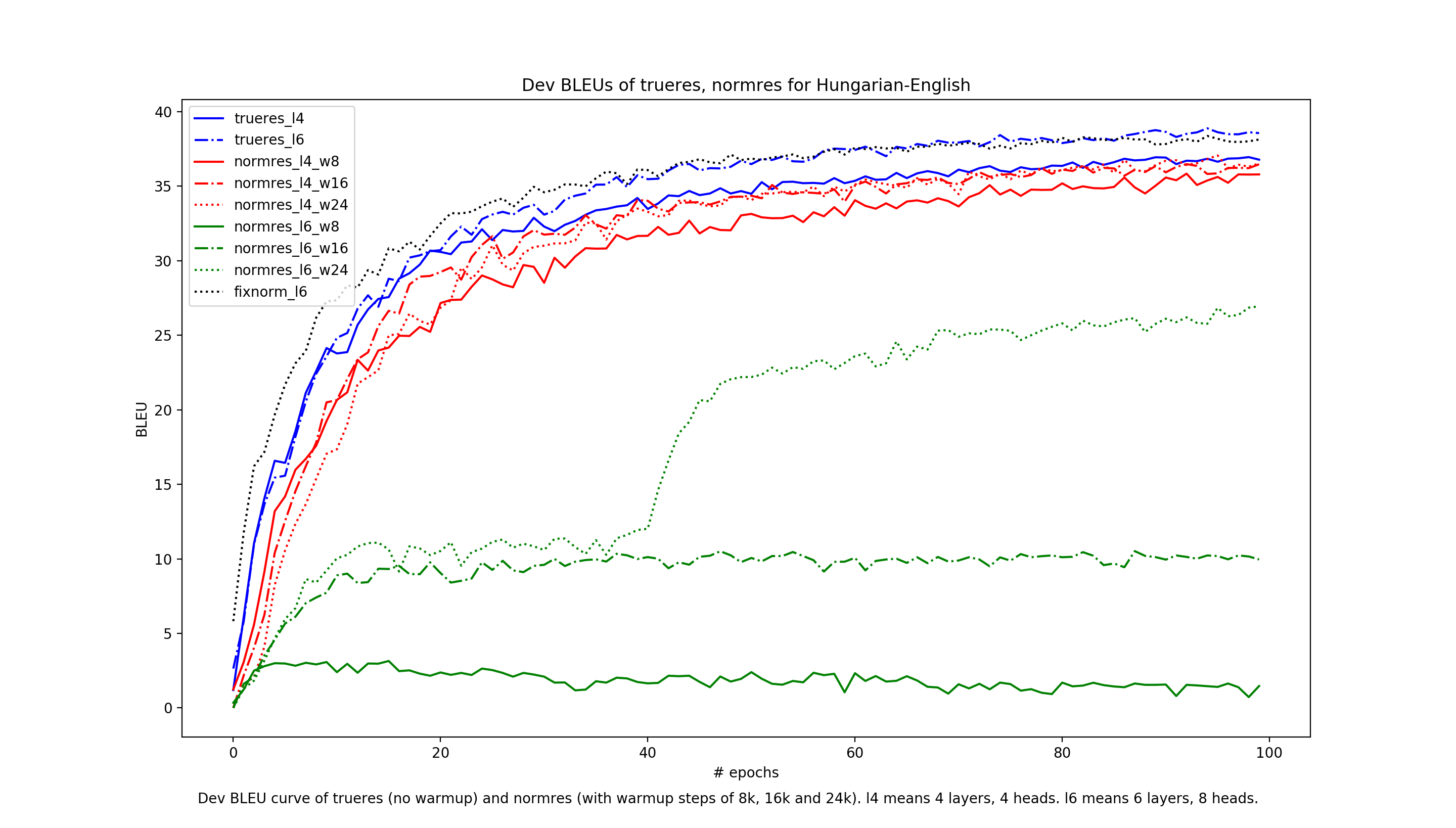 The story is quite different with Arabic-English (and other TED datasets) though. For this dataset, both NormRes and TrueRes end up at about the same BLEU score. However, we can see that NormRes is very sensitive to the warmup step. Note that the TED talk datasets are fairly big (around 200k examples each) so I always use 6 layers. 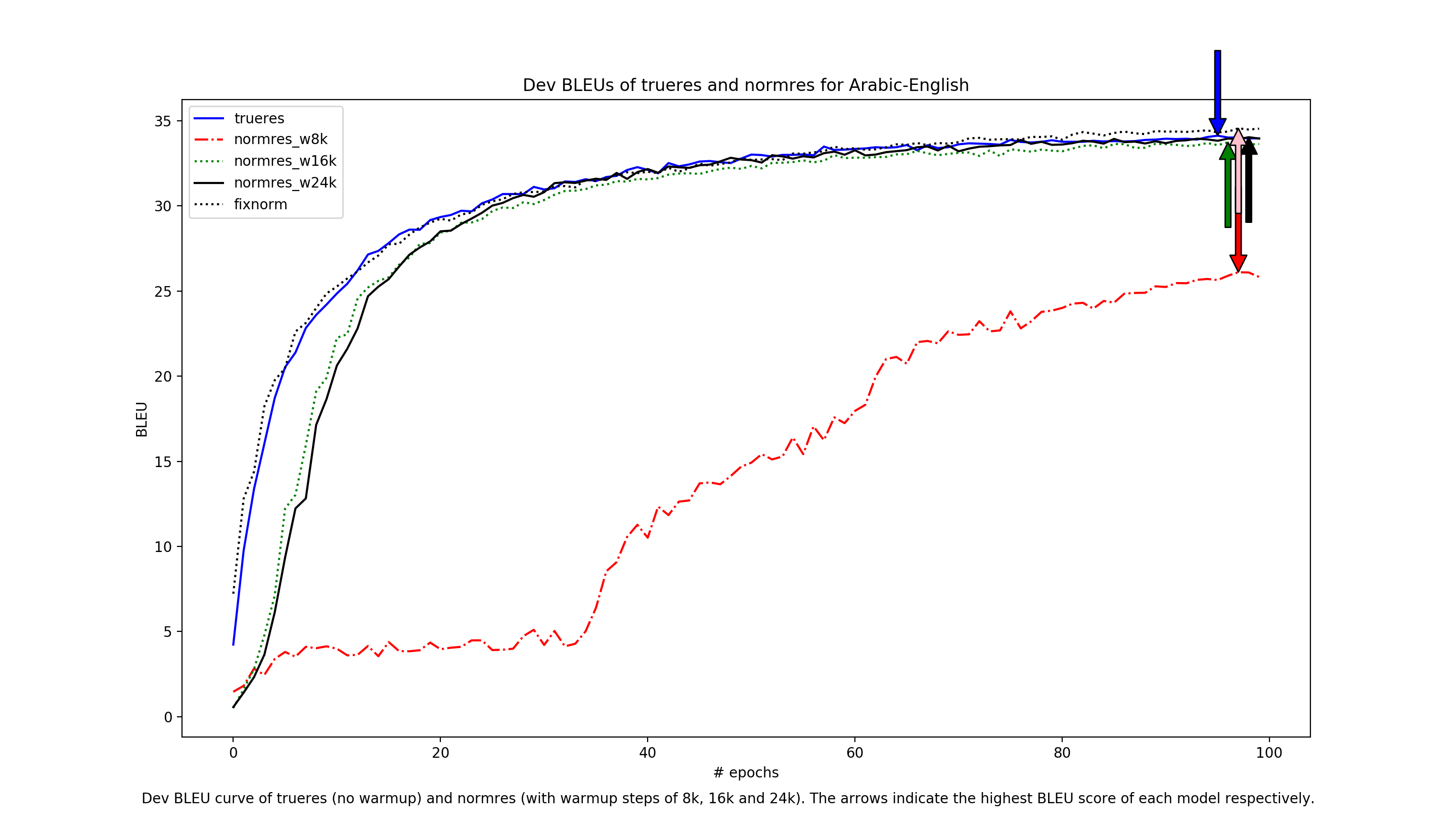 How long to train

It's common to train Transformer for about 100k iterations. This works out to be around 4-50 epochs for Arabic-English. However, we can see that from epoch 50 to 100 we can still get some good gain. Note that for all models here, we use a minibatch size of 4096 tokens instead of 25k tokens. My general rule of thumb is for datasets of around 50k-500k examples, we should train around 100 epochs. Coming from LSTM, Transformer is so fast that training a bit longer still doesn't seem to take much time. See table below for some stats:

Below are some benchmarks and comparison between this code and some published numbers. For all this-code models, we don't use warmup, we start out with learning rate 3×10-4, and decay with factor 0.8 if dev BLEU is not improving compared to previous patience (=3) validations.

All use 8k BPEs. Detokenized BLEU.

Tokenized BLEU to be comparable to previous work.

I'm pretty surprised we got much better BLEU than the multilingual baseline. Note that all of my baselines are bilingual only.

Parts of code/scripts are borrowed/inspired from:

Get A Weekly Email With Trending Projects For These Topics
No Spam. Unsubscribe easily at any time.
python (51,962)
pytorch (2,279)
transformer (175)
machine-translation (64)
attention-is-all-you-need (19)