The goal of this project is to better protect the privacy of civil society by researching and developing a locally and easy to implement VPN that automatically verifies the traffic of devices with AI-based detection to automatically block threats and stop dangerous privacy leaks. The detection of malicious threats, attacks, infections and private leaked data is implemented using novel free software AI technology and automatic reporting. 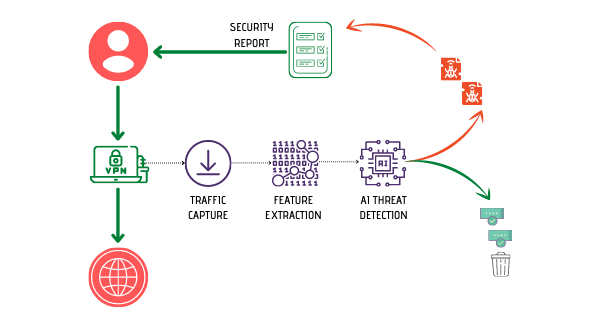 The main features of AI VPN are:

The project documentation and installation guide can be found at aivpn.readthedocs.io.

The AI VPN is under active development. The functionality of the AI VPN is provided by multiple modules:

This project was funded through the NGI0 PET Fund, a fund established by NLnet with financial support from the European Commission's Next Generation Internet programme, under the aegis of DG Communications Networks, Content and Technology under grant agreement No 825310.

This project was developed by the Stratosphere Laboratory, Artificial Intelligence Centre, Faculty of Electrical Engineering, Czech Technical University in Prague (2020-2021).

We would like to specially acknowledge the contributions of the following individuals: