This readme is also available in:

As vim 8.0 released in 2017, we have got many wonderful plugins like: LSP, DAP and asynchronous linters. Even things like vimspector which could only been imagined in emacs in the past, now become reality in vim.

However, vim is still lack of an elegent task system to speed up your inner software development cycle (edit, compile, test). A lot of people are still dealing with those building, testing and deploying tasks in such a primitive or flaky way. Therefor, I decide to create this plugin and introduce vscode's task like machanisms to vim.

Vscode creates a .vscode folder in your project root directory and use a .vscode/tasks.json file to define project specific tasks. Similar, asynctasks.vim uses a .tasks file in your project folders for local tasks and use ~/.vim/tasks.ini to define global tasks for generic projects.

This is very simple, but most good designs always start from a very simple concept. You will benefit a lot from the productivity and possibility of this task system.

It requires asyncrun.vim 2.4.0 or above. Don't forget to setup:

And quickfix window can be opened automatically, otherwise you can't see the task output unless using :copen manually.

Build and run a single file

It's convenient for me to build and run a single file directly without creating a new project for that if I want to try some small and new ideas. In this circumstance, we can use :AsyncTaskEdit command to edit the .tasks configuration file in your current project root directory:

There are two tasks file-build and file-run defined in this .tasks file. Then from the directory where this .tasks reside and its child directories, you can use:

To build and run the current file: 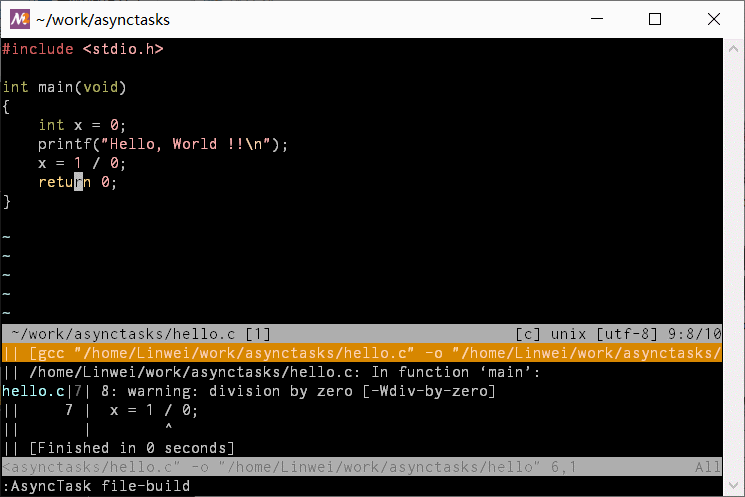 There are many macros can be used in the command field and will be expanded and replaced when task starts. Having a fast, low-friction Edit/Build/Test cycle is one of the best and easiest ways to increase developer productivity, so we will map them to F5 and F9:

Put the code above in your vimrc and you can have F9 to compile current file and F5 to run it. And you may ask, this is for C/C++ only, what if you want to run a python script, should you create a new task file-run-python ? Totally unnecessary, commands can match with file types:

The command followed by a colon accepts file type list separated by comma. If the current file type cannot be matched, the default command will be used. The -save=2 represents to save all modified buffers before running the task.

At this point, you can have your F5 to run all type of files. And plugins like quickrun can be obsoleted immediately, they can't do better than this. Then we continue to polish file-build to support more file types:

Again, F9 can be used to compile many file types, same keybind, different command. This two tasks can be defined in local .tasks and work for the project scope or in the ~/.vim/tasks.ini and work for all project. Much more elegant than using the old &makeprg or calling asyncrun/neomake with a lot if/else in your vimrc.

When you set output to terminal, you can further specify what type of terminal do you want to use exactly, like: a simulated terminal in quickfix window (without matching the errorformat)? the triditional ! command in vim? the internal terminal ? an external terminal window ? or in a tmux split window ?? The detail will be discussed later.

Build and run a project

If you want to do something with a project, you must figure out where the project locates. asynctasks.vim and its backend asyncrun.vim choose a widely used method called root markers to indentify the project root directory. The project root is one of the nearest parent directory containing these markers:

If none of the parent directories contains these root markers, the directory of the current file is used as the project root.

There is a corner case: if current buffer is not a normal file buffer (eg. a tool window) or is an unnamed new buffer, vim's current working directory (which :pwd returns) will be used as the project root.

Once we got the project location, the macro $(VIM_ROOT), or its alias <root>, can be used to represent the project root:

What if your current project is not in any git/subversion repository ? How to find out where is my project root ? The solution is very simple, just put an empty .root file in your project root, it has been defined in g:asyncrun_rootmarks before.

Tasks related to projects can be defined by using this:

No, you don't have to. The easiest way is to put previous project-build and project-run in your ~/.vim/tasks.ini as the default and global tasks, you can use them directly for generic projects using make.

For other type of projects, for example, I am using msbuild in my project A. And I can define a new project-build task in the local .tasks file residing in project A:

The .tasks configuration file are read top to bottom and the most recent tasks found take precedence. and local tasks always have higher priority than the global tasks.

Task defined in .tasks will always override the task with the same name in ~/.vim/tasks.ini. So, in project A, our two old friends project-build and project-run have been replaced with the local methods.

Firstly, the new project-build task will call vcvars32.bat to setup environment variables, then, use a && to concatenate msbuild command. errorformat is initialized to %f(%l):%m for matching Visual C++ errors in this task.

What tasks do you have in current project ? Where are they defined ? Has one global task been overrided by a local one ? We use :AsyncTaskList command to answer these questions: 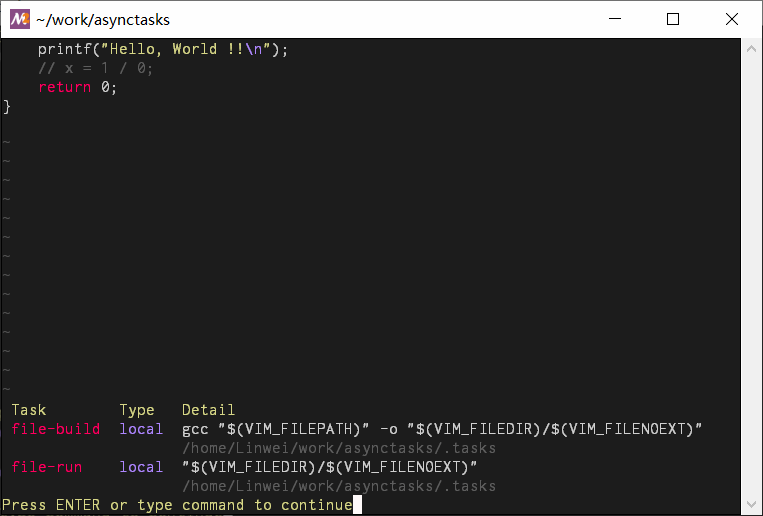 It will display task name, command and where it has been defined.

Bonus: tasks starting with a dot "." will be hidden (eg. ".file-test-temp1"), use :AsyncTaskList! to see them all.

They will be expanded and replaced in the command and cwd fields. System environment variables with same names are also initialized as the same value. If one of your task has many complex shell commands, you can put the commands in a shell script and execute it in the task:

In this case, you don't have to pass any argument to my-build-task.sh, because the shell script can read environment variable $VIM_FILENAME to access current file name. By utilizing system environment variables with external script file, you can describe many complex tasks in your project. And of course, much more powerful than defining some keymaps for ! command in your vimrc.

There is a :AsyncTaskMacro command for you to display macro help: 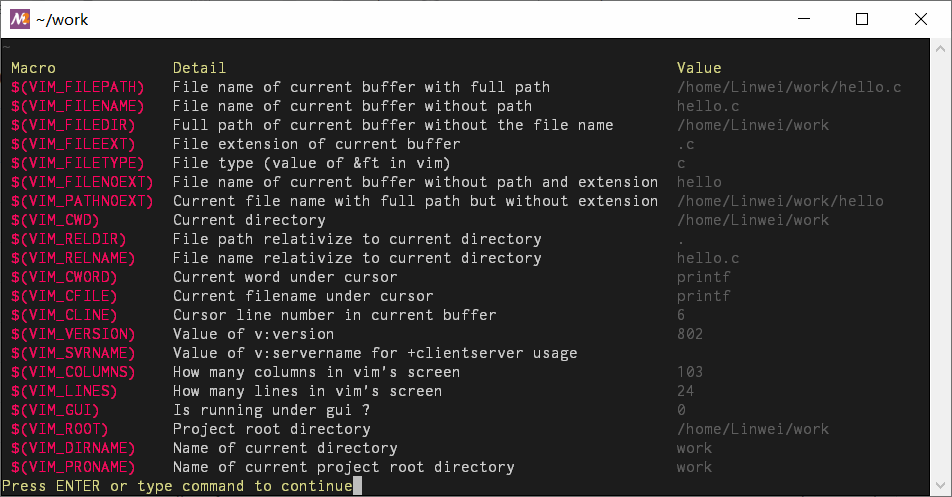 From left to right, is the macro name, what does it stand for and current value. You don't have to check the documentation when you are editing your task configuration.

There is an output field in each task's configuration, it can be one of:

Nothing to talk about output=quickfix, and if you set output to terminal your can further specify the terminal type by setting:

to specify what terminal do you want to use, available options are:

You can set a pos field in a task to override global g:asynctasks_term_pos value in the given task.

Almost all the possible methods are here, choose your favorite one.

When output is terminal, and if you set:

Command :AsyncTask file-run will open an internal terminal under your current window: 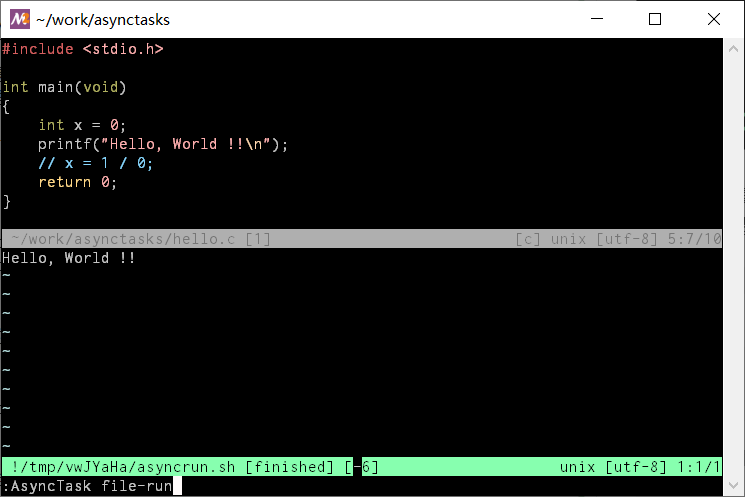 If the previous terminal session has finished, the window will be resused. When you set g:asynctasks_term_pos to one of top, bottom, left and right, these two options below can allow you change the terminal size:

If a terminal split window is too small for you, you can setup:

A whole tab can be used to display the internal terminal: 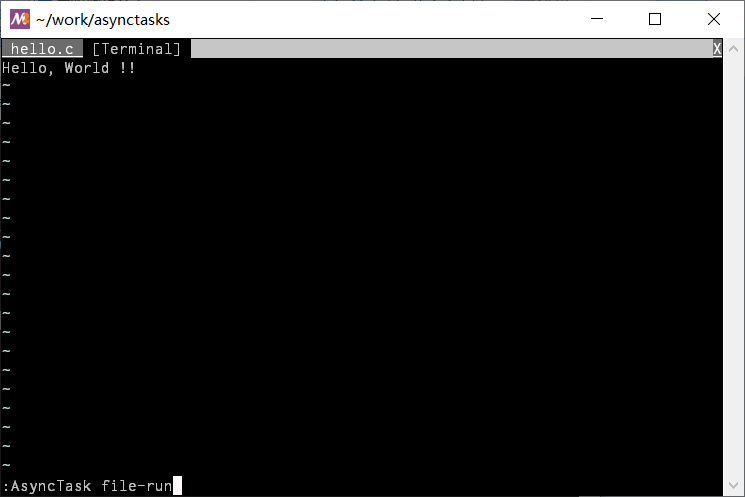 Almost all the vim screen are occupied, is it big enough to fit your need ? This is my most favorite one.

The default quickfix can also be used to run your task, but it is not capable to handle user input, and if your program will interact with user, you may choose a real terminal.

(When you are using internal terminal, asynctasks.vim encourage you to setup ALT+HJKL to jump around windows and ALT+q to exit to terminal normal mode).

Run in an external terminal

Many desktop developer using Visual Studio on Windows prefer to run their programs in a new cmd window, we can use external for this:

Then, every task with output=terminal will open a new cmd window: 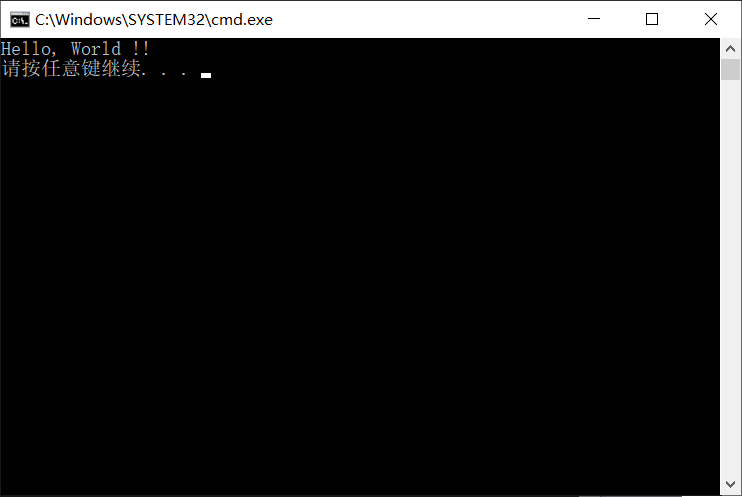 Familiar feeling like you are working in Visual Studio.

asynctasks.vim provide you all the possible ways to run a command in vim with no compromise. Choose one you like.

Some tasks, eg finding strings in current project, may need to ask user to input some keywords before start.

When :AsyncTask task1 happens, you can input values in the prompt area:

There are two variable you need to provide, input them one by one, press ESC to give up and ENTER to confirm. The task will start when you finished:

As you see, $(?your name) has been substituted with the value you just provided.

Hint: use $(?prompt:default) to provide a default value, and $(?prompt:) to remember input history.

Real example used by myself:

Here is my global grep task. Each time I use :AsyncTask grep in any of my project, it prompts me to input keyword before searching, I can use <C-r><C-w> to pickup word under cursor or input something new.

If I need other filetypes to search in certain project, I can redifine a new grep with different parameters for this project.

But most of time, a global grep task is enough, rg supports .ignore files for different files, I can use them to prevent searching in unnecessary files. Check rg documentation for --ignore-file.

One task can have many different profiles:

Here we have task1 with two different profiles release and debug. The default profile is debug, change it to release by:

Then, :AsyncTask task1 will run tasks1 with profile release.

This plugin can select command for given system:

Both filetype and system can be used as filter. Default command (the first one) will be chosen if mismatch.

Change this option to specify your system:

Then command ending with /macos will be selected.

A fuzzy finder can help you pick a task easily:

This plugin have some apis to fetch task information, which makes integration very easy:

It returns a list of items, each item represents a task. And it can be used as the data source for fuzzy finders like fzf.vim or Leaderf.

Here is a instruction to integrate with fzf, leaderf and coc-list.

Don't like the .tasks file name ? Rename it as you want:

Don't like the global tasks.ini file name in your ~/.vim ? Change it to:

Then, these two additional globla configurations will be loaded after reading ~/.vim/tasks.ini.

What terminal do you want to run your task. see Task running modes.

Set to zero to keep focus when using an internal terminal in a new split.

Set to 1 to reuse internal terminal when open it in a new tab.

If it is set to 1, the internal terminal buffers will set bufhidden to hide.

Set to zero to skip filename confirmation in :AsyncTaskEdit.

Command :AsyncTaskEdit accept a template name, the content of template will be used if you are creating a new task config file:

Will create a new file with the template "cargo", if the file doesn't exist.

There are many examples about: cmake, grep, ninja, wsl and more:

This plugin provides you an asynctask.py script (in the bin folder) when you want to run tasks right in your shell:

Use fzf to select task: