This project is developed and maintained by the Tools team. 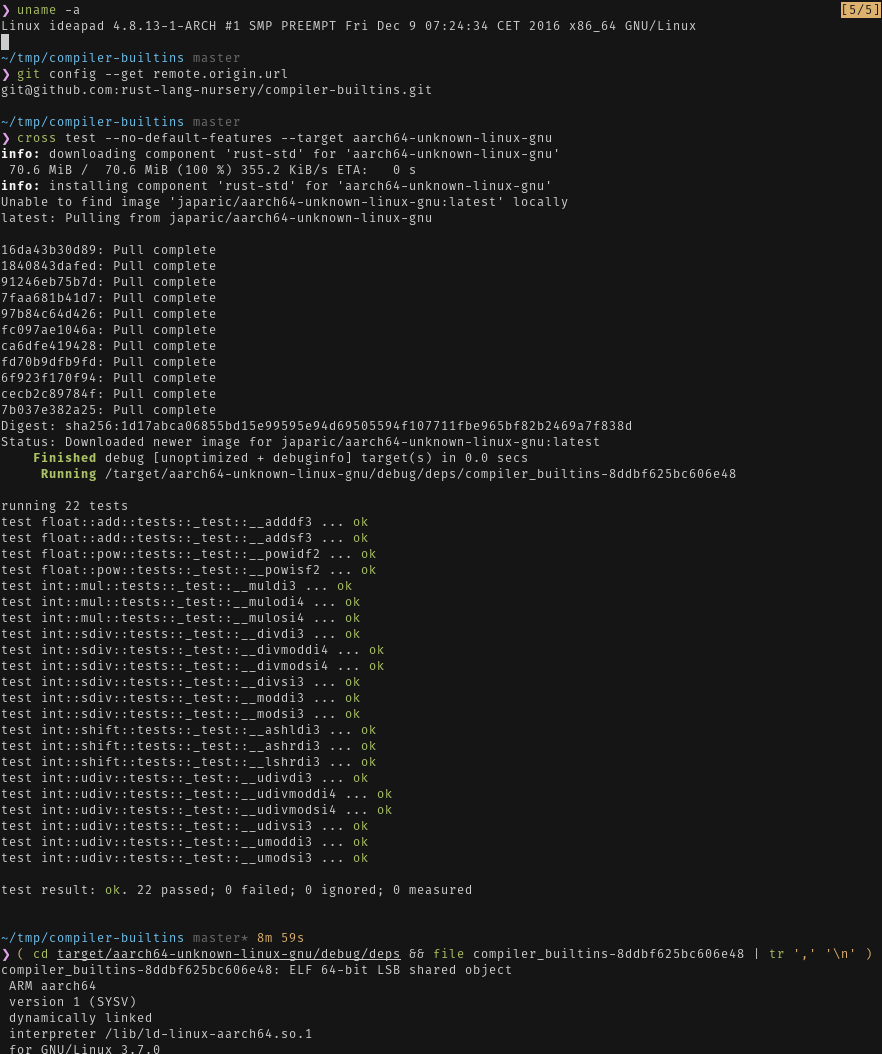 One of these container engines is required. If both are installed, cross will default to docker.

cross has the exact same CLI as Cargo but as it relies on Docker you'll have to start the daemon before you can use it.

You can place a Cross.toml file in the root of your Cargo project to tweak cross's behavior:

cross provides default Docker images for the targets listed below. However, it can't cover every single use case out there. For other targets, or when the default image is not enough, you can use the target.{{TARGET}}.image field in Cross.toml to use custom Docker image for a specific target:

In the example above, cross will use a image named my/image:tag instead of the default one. Normal Docker behavior applies, so:

It's recommended to base your custom image on the default Docker image that cross uses: rustembedded/cross:{{TARGET}}-{{VERSION}} (where {{VERSION}} is cross's version). This way you won't have to figure out how to install a cross C toolchain in your custom image. Example below:

When running cross from inside a docker container, cross needs access to the hosts docker daemon itself. This is normally achieved by mounting the docker daemons socket /var/run/docker.sock. For example:

The image running cross requires the rust development tools to be installed.

With this setup cross must find and mount the correct host paths into the container used for cross compilation. This includes the original project directory as well as the root path of the parent container to give access to the rust build tools.

To inform cross that it is running inside a container set CROSS_DOCKER_IN_DOCKER=true.

A development or CI container can be created like this:

By default, cross tries to use Docker or Podman, in that order. If you want to choose a container engine explicitly, you can set the binary name (or path) using the CROSS_CONTAINER_ENGINE environment variable.

For example in case you want use Podman, you can set CROSS_CONTAINER_ENGINE=podman.

In the instances that you do want to pass through environment variables, this can be done via build.env.passthrough in your Cross.toml:

To pass variables through for one target but not others, you can use this syntax instead:

Mounting volumes into the build environment

Use Xargo instead of Cargo

By default, cross uses xargo to build your Cargo project only for all non-standard targets (i.e. something not reported by rustc/rustup). However, you can use the build.xargo or target.{{TARGET}}.xargo field in Cross.toml to force the use of xargo:

xargo = false will work the opposite way (pick cargo always) and is useful when building for custom targets that you know to work with cargo.

A target is considered as “supported” if cross can cross compile a “non-trivial” (binary) crate, usually Cargo, for that target.

Testing support (cross test) is more complicated. It relies on QEMU emulation, so testing may fail due to QEMU bugs rather than bugs in your crate. That said, a target has a ✓ in test column of the table below if it can run the compiler-builtins test suite.

Also, testing is very slow. cross test runs units tests sequentially because QEMU gets upset when you spawn multiple threads. This means that, if one of your unit tests spawns threads, then it's more likely to fail or, worst, never terminate.

[2] Only works with native tests, that is, tests that do not depends on the Android Runtime. For i686 some tests may fails with the error assertion failed: signal(libc::SIGPIPE, libc::SIG_IGN) != libc::SIG_ERR, see issue #140 for more information.

[4] For *BSD and Solaris targets, the libc column indicates the OS release version from which libc was extracted.

[6] libc = musl, gcc = emcc; Some projects that use libc may fail due to wrong definitions (will be fixed by https://github.com/rust-lang/libc/pull/610)

You can set the QEMU_STRACE variable when you use cross run to get a backtrace of system calls from “foreign” (non x86_64) binaries.

This crate is guaranteed to compile on stable Rust 1.42.0 and up. It might compile with older versions but that may change in any new patch release.

Contribution to this crate is organized under the terms of the Rust Code of Conduct, the maintainer of this crate, the Tools team, promises to intervene to uphold that code of conduct.