OSMQuery is a Python Toolbox for making it easy (easier) to get data out of OpenStreetMap (OSM) and into the Esri ecosystem. With OSMQuery, you can query an area of interest for OSM data (of specified kind) and obtain feature layers of the results, with point, line and/or area features depending on what kind of data OSM holds for your area. This toolbox works both in ArcGIS Pro and in ArcGIS Desktop 10.x.

What the Get OSM Data tool of OSMQuery looks like in ArcMap:

And the same Toolbox in ArcGIS Pro: 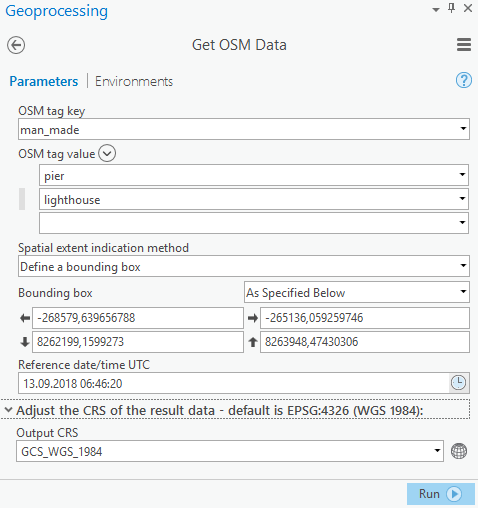 Download this repository (and unzip, if necessary). Either navigate to it in ArcGIS Pro or ArcMap using the "Connect to Folder" function in the ArcCatalog window or add it using the "Add Toolbox" function. Only from within ArcGIS Pro or ArcMap you can restrict the area of interest to the map extent in your display. Running the tool from ArcCatalog you can use any of the other options for specifying your area of interest.

The plugin was developed using ArcGIS 10.6 and ArcGIS Pro 2.2.2 but it was tested on ArcGIS 10.4.1 as well. Besides arcpy, the plugin only uses core modules from Python2/3:

The core modules should be already part of your Python version which was installed alongside with ArcGIS Pro and/or ArcMap.

OSM tags like, for example, amenity=bakery consist of a key (in the example: amenity) and a value (in the example: bakery). In the Get OSM Data tool for simple queries, select a key and value(s) pair for which OSM should be queried for features. In each run of the tool, you can use only one key but you can use one or several values. For example, you can query only for amenity=atm or you can query for both amenity=atm and amenity=bank in one run of the tool. If you chose to do the latter, the results for different tags (or more specifically: OSM values) are summarized into one feature class per geometry type.

Both tools, Get OSM Data and Get OSM Data (Expert Tool), will add all tags that occur in the features found in OSM as attributes (fields) as well as their values. The OSM tag keys become attribute names, the OSM tag values become attribute values. Specifically, in the case of querying multiple OSM tag values at once, e.g. amenity=atm and amenity=bank, your resulting feature layers will obtain the 'union' of the data models of the individual queries. In the example of amenity=atm and amenity=bank your resulting feature layer might have both the attributes currencies and opening_hours, where the former is only filled for ATMs and the latter is only filled for banks.

Defining an Area of Interest

For defining the spatial extent of your query you can use two options: You can either enter a region name (which will be geocoded using the OSM-based geocoding service Nominatim) or you can define a bounding box using the standard ArcGIS Pro or ArcMap options, e.g. manually specifying coordinates, using the extent of a layer or the option Same as Display.

Defining a Date and Time of Interest

Working with the Resulting Data

After any of the two tools has run successfully, the results will be drawn on the map in up to three timestamped feature layers (one each for point features, line features, and polygon features). The respective feature classes will be stored in your Scratch Workspace (arcpy.env.scratchWorkspace). If you want to persist the results, you can export the feature layers from the table of contents of ArcGIS Pro or ArcMap (or directly from your Scratch Workspace) into new feature classes in a destination of your choosing. 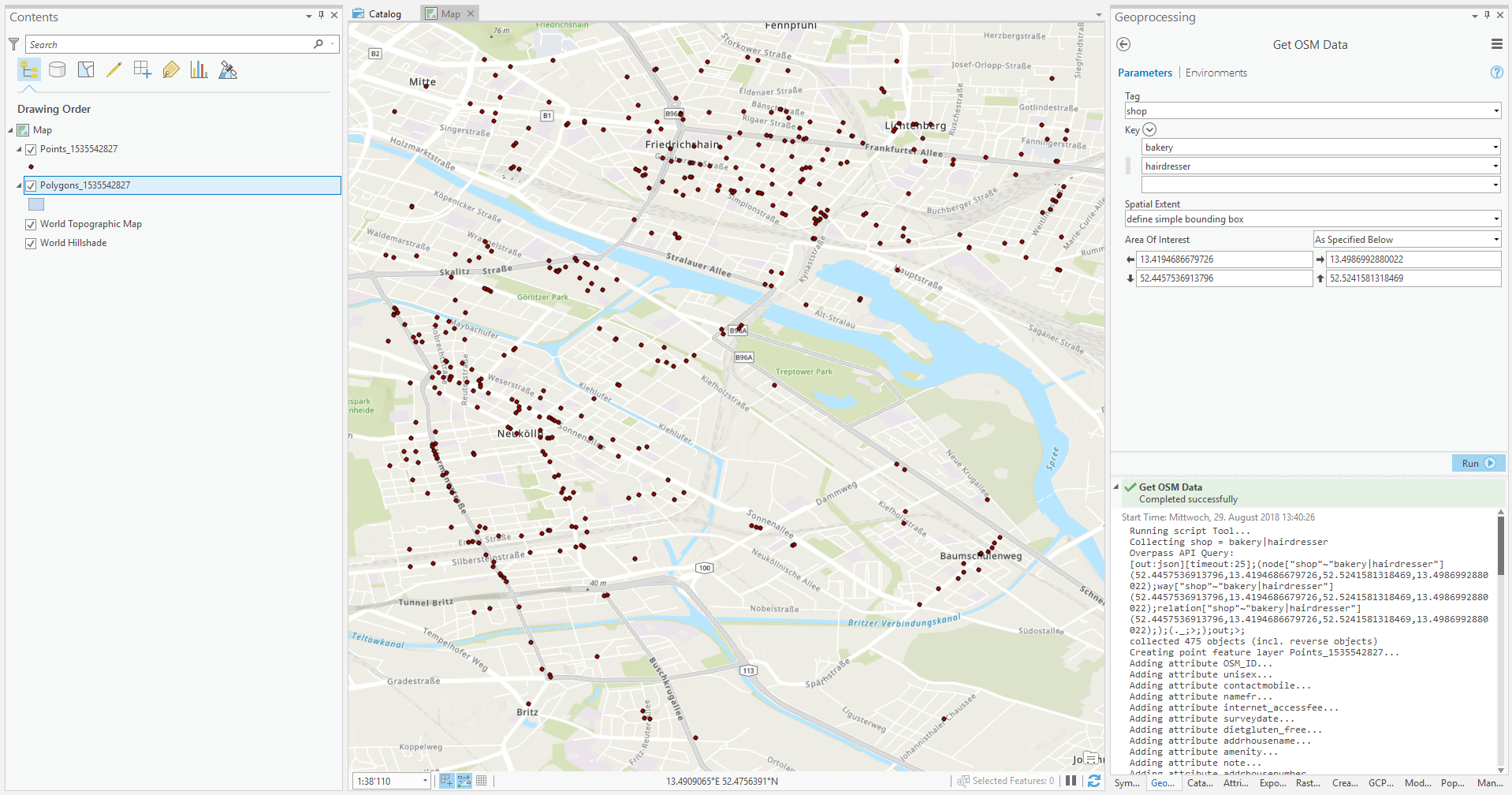 Both tools in this toolbox rely on the OSM Overpass API. As the size of an Overpass API query result is only known when the download of the resulting data is complete, it is not possible to give an estimate of the number of features a query yields, or the time-until-completion, during the query process. The Overpass API uses a timeout after which a query will not be completed. If you run into timeout problems consider narrowing your query thematically and/or spatially. For other limitations of the Overpass API and potential workarounds please consider the pertinent OSM Wiki Page.

The idea for OSMQuery was conceived and first implementations were done by Riccardo Klinger of Esri Germany, further contributions by Ralph Straumann of EBP and michaelmgis. Help us improve OSMQuery by testing, filing bug reports, feature requests or ideas. Thank you!

OSMQuery relies on the OSM Overpass API which is licensed under the GNU Affero GPL v3. All OSM data you obtain through this tool are, of course, © OSM contributors.

Get A Weekly Email With Trending Projects For These Topics
No Spam. Unsubscribe easily at any time.
python (50,901)
openstreetmap (132)
arcgis (28)
esri (14)