Reactuate is an opinionated stack for building React/Redux-based frontend applications with a focus on DDD (Domain-Driven Design). The rationale behind this project is to ensure there's a "standard stack" with compatible versions of various libraries stitched together in a cohesive way. This comes at a cost of reduced ability to swap out certain components but ultimately helps shipping software fast.

This is an early version, and some things are in a flux, and some underlying libraries and APIs will change before 1.0.

Table of Contents generated with DocToc

Below is a quick reference diagram of the Reactuate stack. 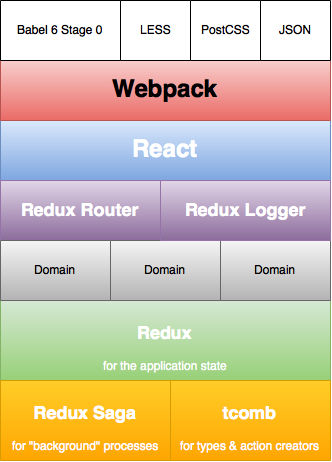 More recent versions are allowed, within the upper boundary of the next major version.

In order to produce the extracted source code of Reactuate (should you need it), you will need litpro npm package to be installed. Currently required version:

Building Reactuate is quite simple:

As it has been mentioned before, Reactuate is distributed as a dependency, and can be installed with npm. Assuming you already initialized your project with npm init:

Now you can open http://localhost:3000 to run the first application!

Note: The development server port defaults to 3000, but can be configured using PORT environment variable.

The rest of this manual will introduce you to the concepts and software used in the stack. Please note that this stack is developed as a literate program. This means that you'll see excerpts from the stack's code and examples of how you can use these parts. All excerpts are marked with this image:

There's normally little to no Webpack configuration tweaking you need to do.

By default, it will assume your index.html to be this:

When you are ready to override it, simply copy the above file to the root of your project.

This file will be processed with npm|[email protected].

Reactuate will search for source code files in this directory in your project:

It will assume your main file in that directory to be index.js, and if there is no such file in your project yet, Reactuate will use its own sample file.

All the JavaScript files are going to be process by Babel through the use of npm|[email protected] plugin.

To enable ES2015 syntax and experimental features, the following plugins are required:

To enable React-specific features, a number of Babel plugins is required:

Source code builds will be produced into this directory in your project:

When used in development mode, Webpack should use Webpack development server as an entry point and enable hot module replacement,

In production, following HTML processing will be performed:

Reactuate's Webpack configuration will define the location of the reactuate module as REACTUATE_DIRNAME variable in the target runtime.

In production, it will produce compacted and somewhat obscured JavaScript (no source map to avoid divulging original source code's information).

It will also set process.env to your host's process.env.NODE_ENV (if none specified, then it will be assumed to be development).

What's important, since babel-loader will not use local .babelrc to merge options, Reactuate will read .babelrc (but not babel configuration from package.json yet) and merge it with its own defaults (it will use npm|[email protected] for that).

By default, .babelrc takes precedence (this also means that arrays specified in .babelrc are appended to those in defaults). If the precedence needs to be flipped (for example, certain presets need to be invoked before the default ones), .babelrc.default file can be used instead of (or in addition to) .babelrc

It will also enable source maps in development.

You will be able to run it with

It is imperative to be able to run an easy to update, hot-reloadable development version of the application before shipping a build. This is what npm|[email protected] does.

In order to start a development Webpack server, you can run:

Alternatively, you can add a convenience helper to your package.json:

With this you can simply run the following to start your development server:

Babel 6 is still fairly new and unfortunately, not all tools support it well, but this should be less of a problem going forward.

In order to avoid generating plain JavaScript files for this package, we also include babel-register npm|ba[email protected]

ES6 also has new APIs that are provided by npm|[email protected].

Our own version of createStore takes care of a few things automatically.

It enables serializability of domain actions:

And adds logging in the development mode:

It is important to note that it automatically injects a store enhancer for react-router:

We also supplement it with a npm|Redux extension npm|[email protected]. Although this one is less stable, we believe it has more comprehensive functionality comparing to redux-simple-router.

First of all, we want to define a way to create a router-enabled composite reducer:

We also standardize route initialization. This step is hidden from the end user.

Many React/Redux applications adopt the following directory layout (or a variation of it):

We find this layout to be very counter-productive comparing to organizing code by domains. It is only marginally better than organizing directories or packages by entity types. Consider doing this in Java:

Does this make a lot of sense to you? Hope not!

This way you don't need to jump across the hierarchy of the project while working on one domain, and you can easily rename the whole domain without having to rename 4-5 files across the project!

Now we have approached one of the most important aspects of Reactuate. We structure our applications around domains, not types of artifacts.

While JavaScript as a language is quite flexible and doesn't possess a strong type system, there are some great libraries available that solve this problem to an extent. Reactuate applications make a heavy use of npm|[email protected] and its helper module npm|[email protected].

First of all, we need to define a class representing a domain. It is a named container for all things associated with one domain (including, but not limited to, types, action creators, sagas and a reducer).

Most of the time, you don't need to do anything with the Domain object yourself, except for passing it as a parameter to other Reactuate functions that you'll see below. One significant exception to that is our current convention of "attaching" your types to the domain. Consider this example:

This way you can easily access types from other domains when importing those domains:

Every domain begins with a state. We define state with tcomb's help:

In the above example, we are defining a state that has a counter. Now, we should define an increment action. Reactuate offers helper functionality to do so, in adherence with FSA npm|[email protected] guidelines:

Unfortunately, tcomb structures do not fit the definition of a plain object required by redux, so we have to implement a custom middleware that strips the extra metadata.

IncrementCounter in the example below is an action creator:

Reactuate has a helper that allows creating a reducer that (again) makes a good use of tcomb. The syntax that it defines is based on the one from tcomb.match(). After specifying the domain and the initial state, it takes a variadic list of matchers:

Where each Matcher has the following structure: type, [guard], handler:

It also takes care of disabling state mutation (however, normally this shouldn't be necessary, if tcomb is used for action creators).

Now, we can define a reducer this way:

Did you notice we avoided creating the whole layer of 'constants'?

When asynchronous (thunk middleware) action creates are getting too complex, it's a sign that it's time to manage effects in an orchestrated way. We are using redux-saga, npm|[email protected] for that.

The below example shows handling the counter example in an async way (we're introducing a delay as well):

Putting it all together

You can use it this way (this is the sample file you get by default, by the way!):

Reactuate is nice enough to help you finalizing your setup once it is installed. This requires npm|[email protected].

Alternatives To ReactuateSelect To Compare
33 Js Concepts ⭐ 53,448
📜 33 JavaScript concepts every developer should know.
most recent commit 4 days ago
Js Stack From Scratch ⭐ 19,396
🛠️⚡ Step-by-step tutorial to build a modern JavaScript stack.
most recent commit a month ago
Under The Hood Reactjs ⭐ 4,768
Entire React code base explanation by visual block schemes (Stack version)
most recent commit a year ago
Project_mern_memories ⭐ 4,112
This is a code repository for the corresponding video tutorial. Using React, Node.js, Express & MongoDB you'll learn how to build a Full Stack MERN Application - from start to finish. The App is called "Memories" and it is a simple social media app that allows users to post interesting events that happened in their lives.
most recent commit 11 days ago
Notistack ⭐ 3,081
Highly customizable notification snackbars (toasts) that can be stacked on top of each other
dependent packages 311total releases 99most recent commit 2 months ago