The CaliperSharp C# library project manages units of measure and conversions between them. It is a port of the java Caliper library (see https://awesomeopensource.com/project/point85/caliper). CaliperSharp is designed to be lightweight and simple to use, yet comprehensive. It includes a large number of pre-defined units of measure commonly found in science, engineering, technology, finance and the household. These recognized systems of measurement include the International System of Units (SI), International Customary, United States and British Imperial. Custom units of measure can also be created in the CaliperSharp unified measurement system. Custom units are specific to a trade or industry such as industrial packaging where units of can, bottle, case and pallet are typical. Custom units can be added to the unified system for units that are not pre-defined.

A CaliperSharp measurement system is a collection of units of measure where each pair has a linear relationship, i.e. y = ax + b where 'x' is the abscissa unit to be converted, 'y' (the ordinate) is the converted unit, 'a' is the scaling factor and 'b' is the offset. In the absence of a defined conversion, a unit will always have a conversion to itself. A bridge unit conversion is defined to convert between the fundamental SI and International customary units of mass (i.e. kilogram to pound mass), length (i.e. metre to foot) and temperature (i.e. Kelvin to Rankine). These three bridge conversions permit unit of measure conversions between the two systems. A custom unit can define any bridge conversion such as a bottle to US fluid ounces or litres.

The diagram below illustrates these concepts. 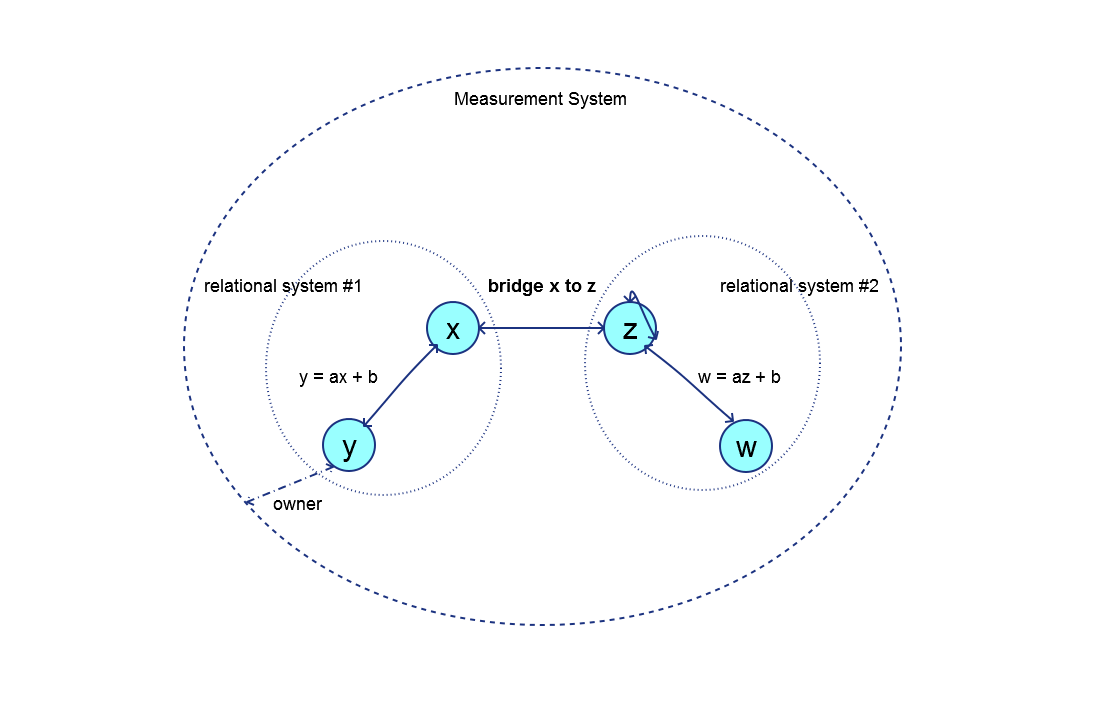 All units are owned by the unified measurement system. Units 'x' and 'y' belong to a relational system (such as SI or International Customary). Units 'w' and 'z' belong to a second relational system. Unit 'y' has a linear conversion to unit 'x'; therefore 'x' must be defined before 'y' can be defined. Unit 'x' is also related to 'y' by x = (y - b)/a. Unit 'w' has a conversion to unit 'z'. Unit 'z' is related to itself by z = z + 0. Unit 'x' has a bridge conversion defined to unit 'z' (for example a foot to a metre). Note that a bridge conversion from 'z' to 'x' is not necessary since it is the inverse of the conversion from 'x' to 'z'.

A simple unit, for example a metre, is defined as a scalar UOM. A special scalar unit of measure is unity or dimensionless "1".

A unit of measure that is the product of two other units is defined as a product UOM. An example is a Joule which is a Newton·metre.

A unit of measure that is the quotient of two other units is defined as a quotient UOM. An example is a velocity, e.g. metre/second.

Units are classified by type, e.g. length, mass, time and temperature. Only units of the same type can be converted to one another. Pre-defined units of measure are also enumerated, e.g. kilogram, Newton, metre, etc. Custom units (e.g. a 1 litre bottle) do not have a pre-defined type or enumeration and are referred to by a unique base symbol.

A quantity is an amount (implemented as a floating point double precision number) together with a unit of measure. When arithmetic operations are performed on quantities, the original units can be transformed. For example, multiplying a length quantity in metres by a force quantity in Newtons results in a quantity of energy in Joules (or Newton-metres).

A unit of measure is represented internally as a product of two other power units of measure:

From the two power products, a unit of measure can then be recursively reduced to a dictionary of base units of measure and corresponding exponents along with a scaling factor. For example, a Newton reduces to (kg, 1), (m, 1), (s, -2) in the SI system. Multiplying, dividing and converting a unit of measure is accomplished by merging the two dictionaries (i.e. "cancelling out" units) and then computing the overall scaling factor. The base symbol is obtained directly from the final dictionary.

The singleton unified MeasurementSystem is obtained by calling:

The metre scalar UOM is created by the MeasurementSystem as follows:

The square metre power UOM is created by the MeasurementSystem as follows:

The metre per second quotient UOM is created by the MeasurementSystem as follows:

The Newton product UOM is created by the MeasurementSystem as follows:

A millisecond is 1/1000th of a second with a defined prefix and created as:

For another example, a US gallon = 231 cubic inches:

When creating the foot unit of measure in the unified measurement system, a bridge conversion to metre is defined (1 foot = 0.3048m):

Custom units and conversions can also be created:

Quantities can be added, subtracted and converted:

as well as multiplied and divided:

To make working with linearly scaled units of measure (with no offset) easier, the MeasurementSystem's GetUOM() using a Prefix can be used. This method accepts a Prefix object and the unit of measure that it is scaled against. The resulting unit of measure has a name concatented with the Prefix's name and target unit name. The symbol is formed similarly. For example, a centilitre (cL) is created from the pre-defined litre by:

A quantity can be converted to another unit of measure without requiring the target UOM to first be created. If the quantity has a product or quotient UOM, use the ConvertToPowerProduct() method. For example:

If the quantity has power UOM, use the ConvertToPower() method. For example:

Other UOMs can be converted using the Convert() method.

During arithmetic operations, the final type of the unit may not be known. In this case, invoking the Classify() method will attempt to find a matching unit type. For example, the calculated unit of measure below has a type of UnitType.ELECTRIC_CAPACITANCE:

A quantity resulting from an arithmetic operation can also be classified. For example, the "density" quantity has UnitType.DENSITY:

One's Body Mass Index (BMI) can be calculated as:

Expansion of the universe:

Value of a stock portfolio:

A unit of measure once created is registered in two dictionaries, one by its base symbol key and the second one by its enumeration key. Caching greatly increases performance since the unit of measure is created only once. Methods are provided to clear the cache of all instances as well as to unregister a particular instance.

and for an exception:

The CaliperSharp library has the following structure: