Looking for the Compose version? Check this out.

An example of setting up:

MapView shows only the visible part of a tiled map, and supports flinging, dragging, scaling, and rotating. It's also possible to add markers and paths.

This project holds the source code of this library, plus a demo app (which is useful to get started). To test the demo, just clone the repo and launch the demo app from Android Studio.

To be consistent with previous versions, this is disabled by default. To enable it, use MapViewConfiguration.enableRotation(). You will find a code example inside the demo RotatingMapFragment.

When enabling rotation, the MapView handles rotation gestures by default. If you only want to rotate the map through APIs, then you should use enableRotation(handleRotationGesture = false). The MapView has a new API setAngle:

Add this to your module's build.gradle

In addition, update the module's build.gradle file (for each module that uses MapView), as shown below:

As a long time contributor to TileView, I wanted to see the performance we would get using idiomatic Kotlin (coroutines, flows). The result was beyond my expectations. The overall design can be seen here. Special attention has been given to efficiency (using non-blocking algorithm to avoiding thread contention). We get smooth animations and high fps.

Thanks for Mike (@moagrius), as this library wouldn't exist without his first contributions.

MapView is optimized to display maps that have several levels, like this: 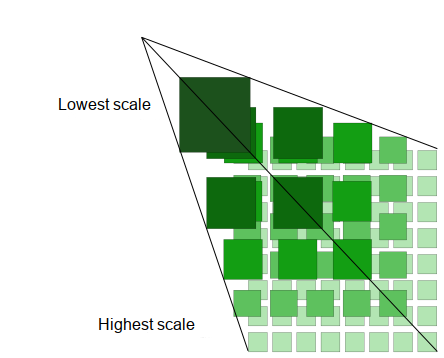 Each next level is twice bigger than the former, and provides more details. Overall, this looks like a pyramid. Another common name is "deep-zoom" map. This library comes with a demo app made of a set of various use-cases such as using markers, paths, rotating the map, etc. All examples use the same map stored in the assets. If you wonder what a deep-zoom maps looks like, you have a great example there.

MapView can also be used with single level maps.

To use the MapView, you have to follow these steps:

For more insight, you can have a look at the source of the various demos.

The MapView needs to be configured - more on that below. Once configured, you can do a lot of things with your MapView instance. MapView is a subclass of GestureLayout, which has many features. You can:

This list isn't complete. You can explore the capabilities in the source of GestureLayout.

The MapView must be configured using a MapViewConfiguration. It holds the mandatory parameters to build a MapView.

Then, you can set optional properties by calling available methods on your MapViewConfiguration instance. Here is an example:

See documentation here. Below is a description of mandatory parameters:

The size of the tiles in pixels, which are assumed to be squares and always of the same size for all levels. For now, MapView doesn't support rectangular tiles or tiles of heterogeneous sizes.

See the section below.

The MapView will request tiles using the convention that each levels has its tiles organized like this: 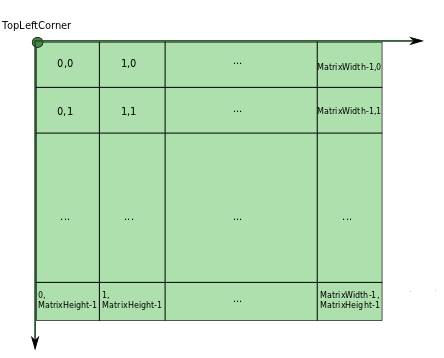 MapView isn't opinionated about the origination of tiles. This is the purpose of the TileStreamProvider:

Your implementation of this interface does the necessary coordinate translation (if required). This is where you do your HTTP request if you have remote tiles, or fetch from a local database (or file system).

The MapView leverages bitmap pooling to reduce the pressure on the garbage collector. However, there's no tile caching by default - this is an implementation detail of the supplied TileStreamProvider.

When the scale and/or the rotation of the MapView change, some of the child views might have to change accordingly. For that purpose, you can register a ReferentialListener to the MapView.

A ReferentialListener is an interface:

A ReferentialListener should be registered to the MapView:

From inside your ReferentialListener implementation, you can have any logic you want. You can rotate some markers, rotate complex views taking into account the centerX and centerY properties, etc.

There's an example of usage at RotatingMapFragment.

If you don't already have such a map and you need to make one from a big image, follow this tutorial.

API documentation has its own wiki page.