Mutation testing is a technique to detect bugs in a program by changing its source code (called "mutation") and checking whether the program's test suite detects this mutation. The mutations are designed to mimic typical programming errors (e.g., off-by-one errors). If such errors are not noticed by the test suite, the "survived" mutation can be used to create an additional test that would detect it.

Mutate++ is a mutation test environment for C++ programs. It supports you with the following tasks:

Mutate++ is a web app that runs locally on your machine. All computation is locally, and no data is shared with anyone.

You need Python 3 which can be downloaded here or installed by your operating systems's package manager.

After checking out the sources from this repository, you need to create a virtual environment and install the required packages:

Next, we need to create a database where mutations and the results are stored:

The database file is an SQLite3 database app/app.db. You can then run the app with

We use a small example project to demonstrate the required steps to set up a project in Mutate++. We assume that you have git, CMake, make, and a C++ compiler installed. 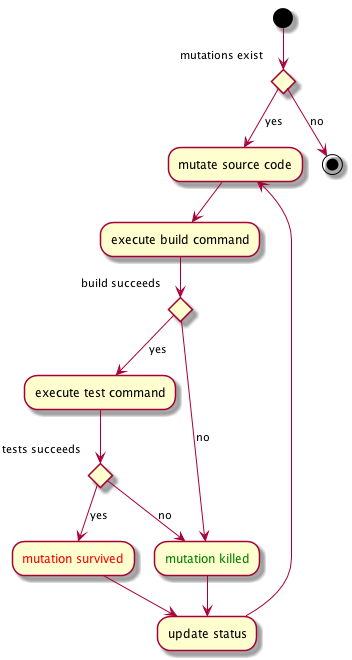 We now have two directories we will be referring to later:

In the following, we shall refer to these commands as: 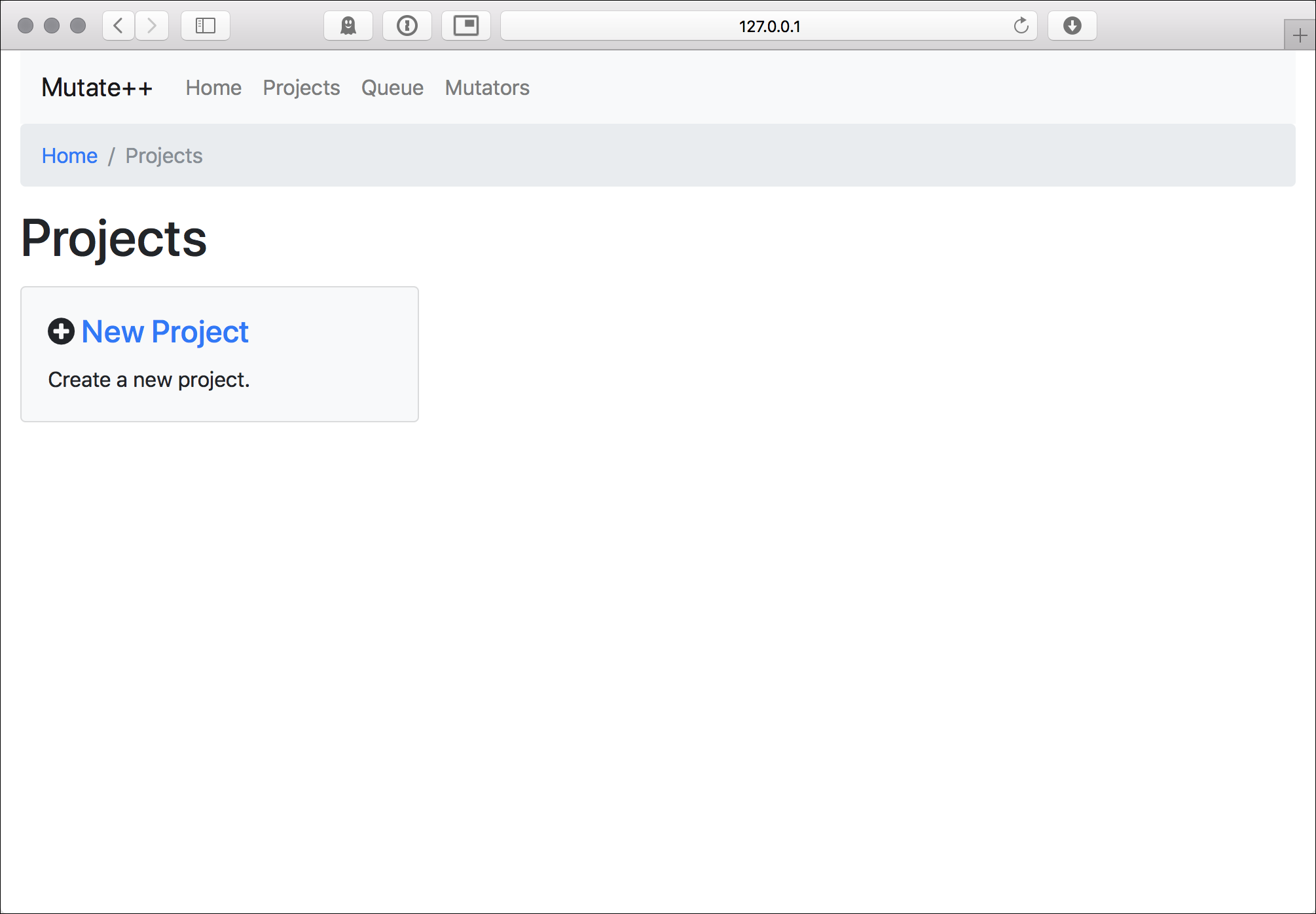 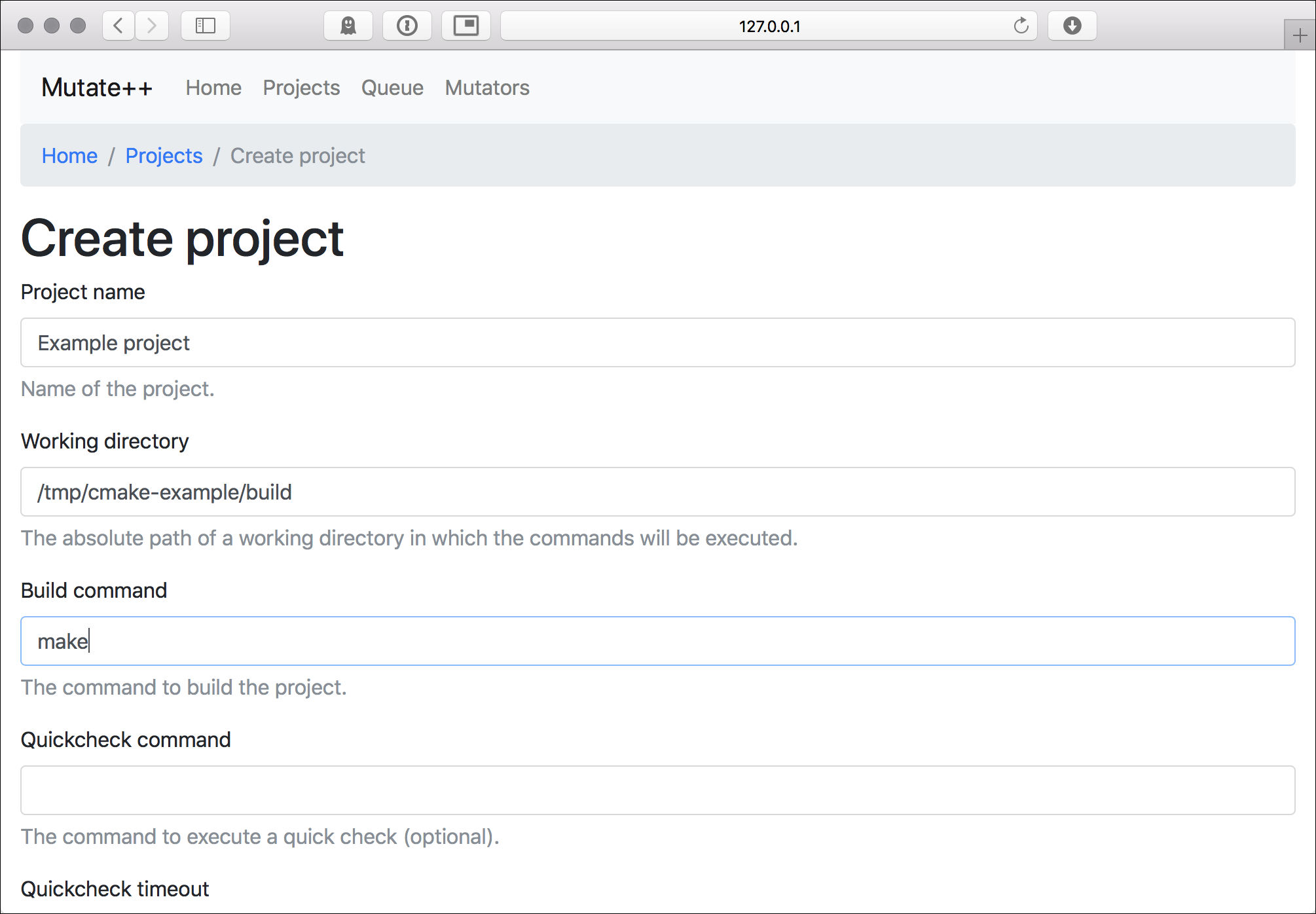 Note that we assume the build and test command to succeed if they end with exit code 0. This is the default for most tools like CMake, CTest, Ninja, etc. 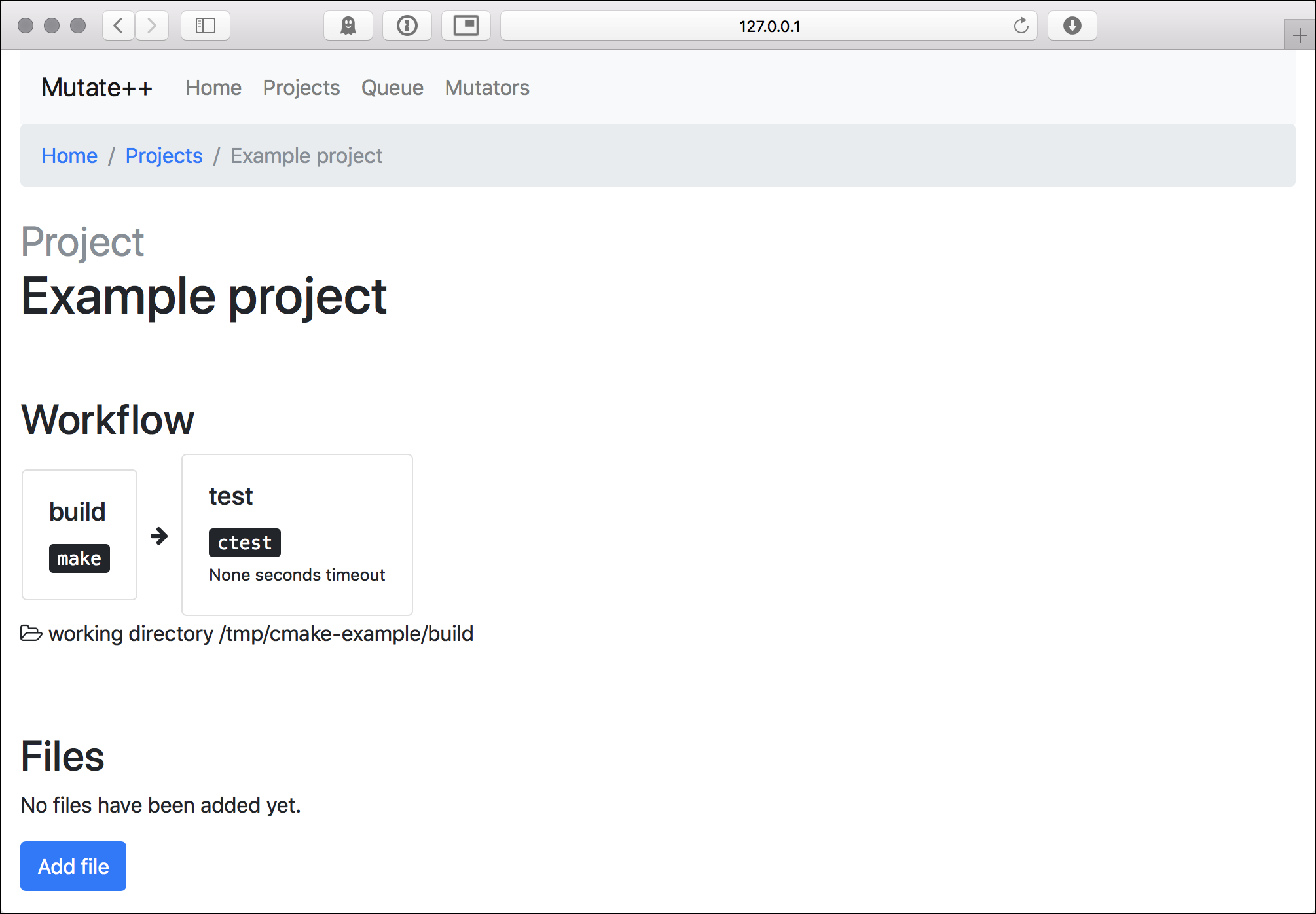 We are now in the project overview and see the workflow Mutate++ will execute, consisting of the steps "build" and "test". We see that no files have been added yet, and also the patches overview is empty. 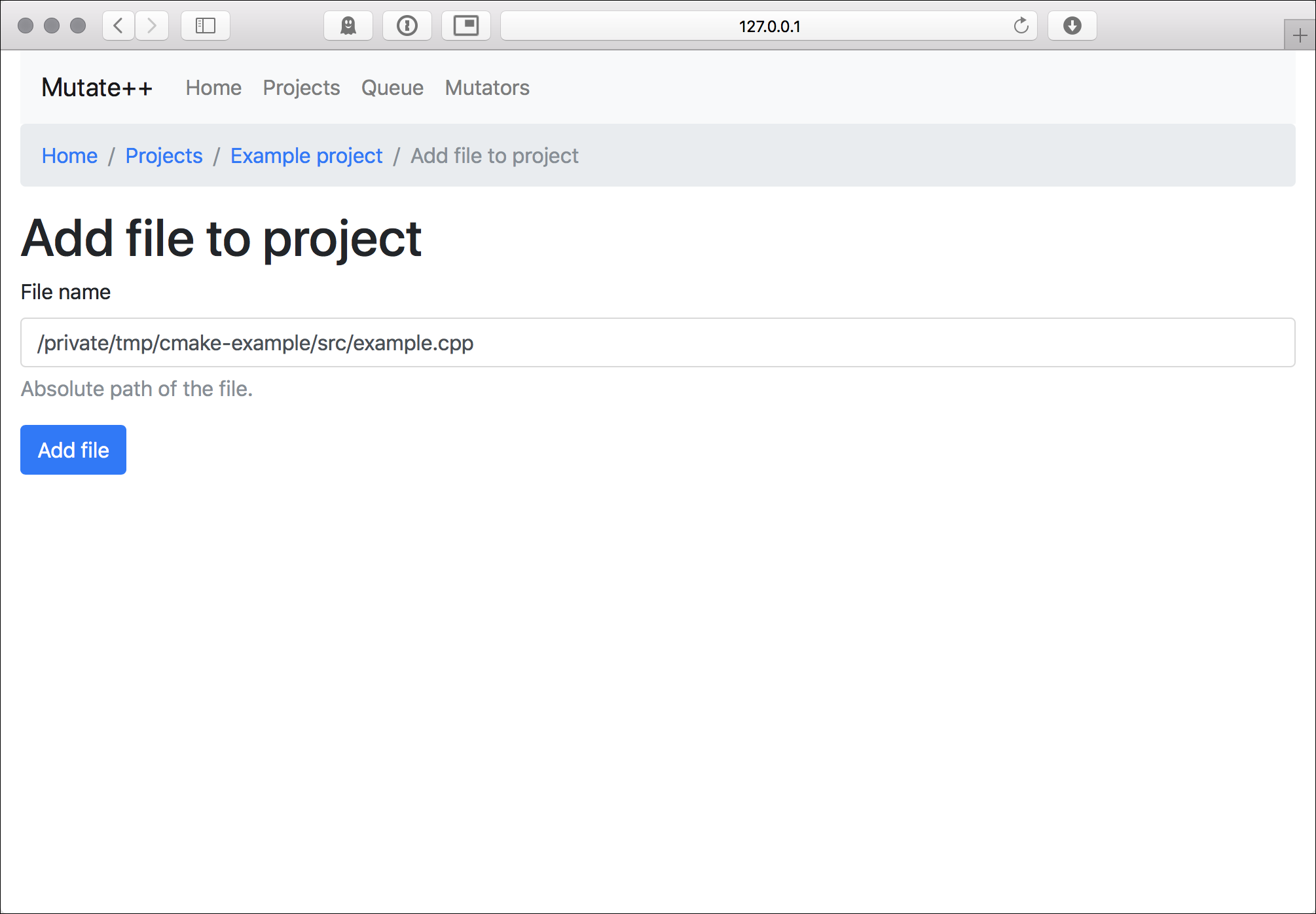 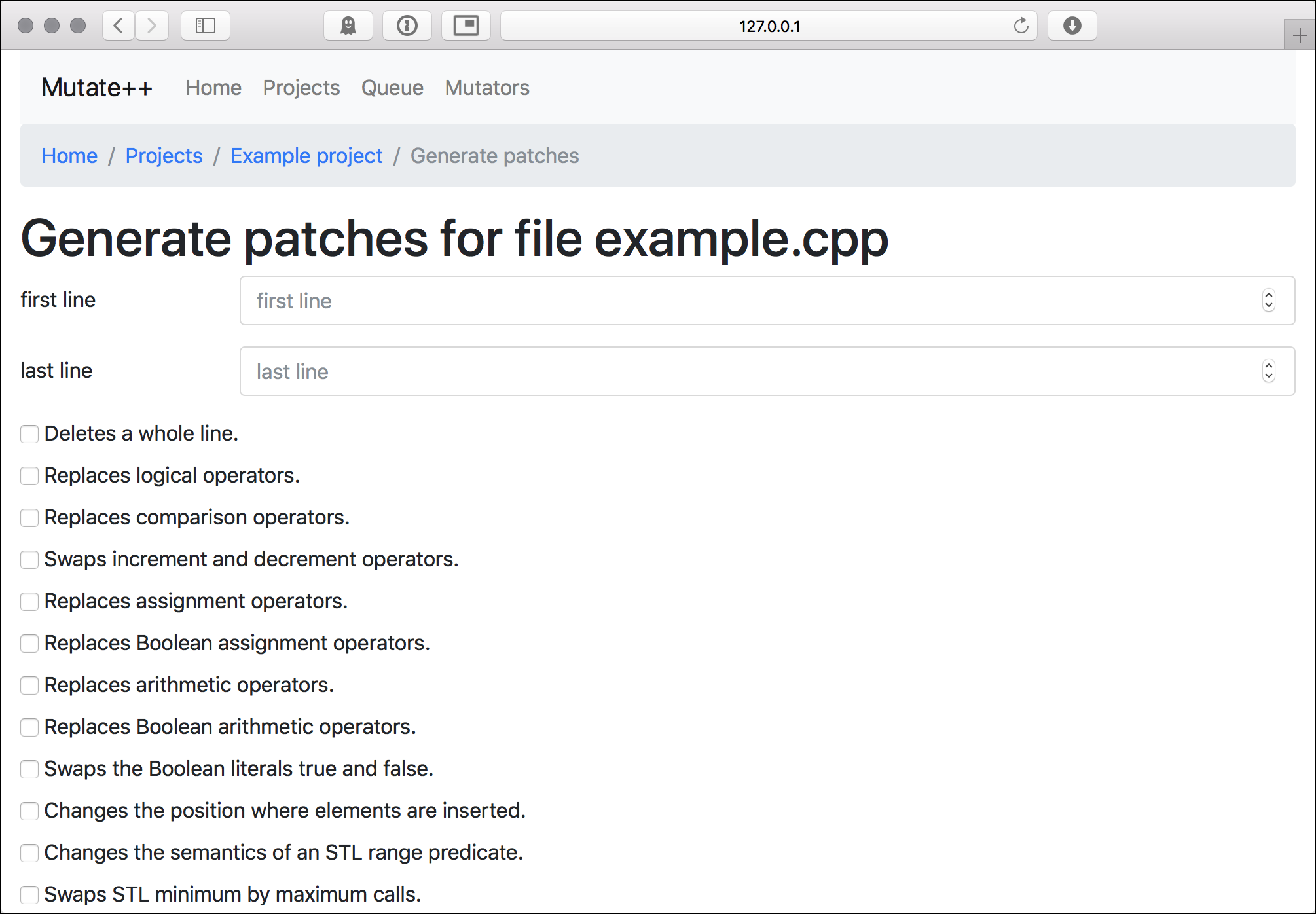 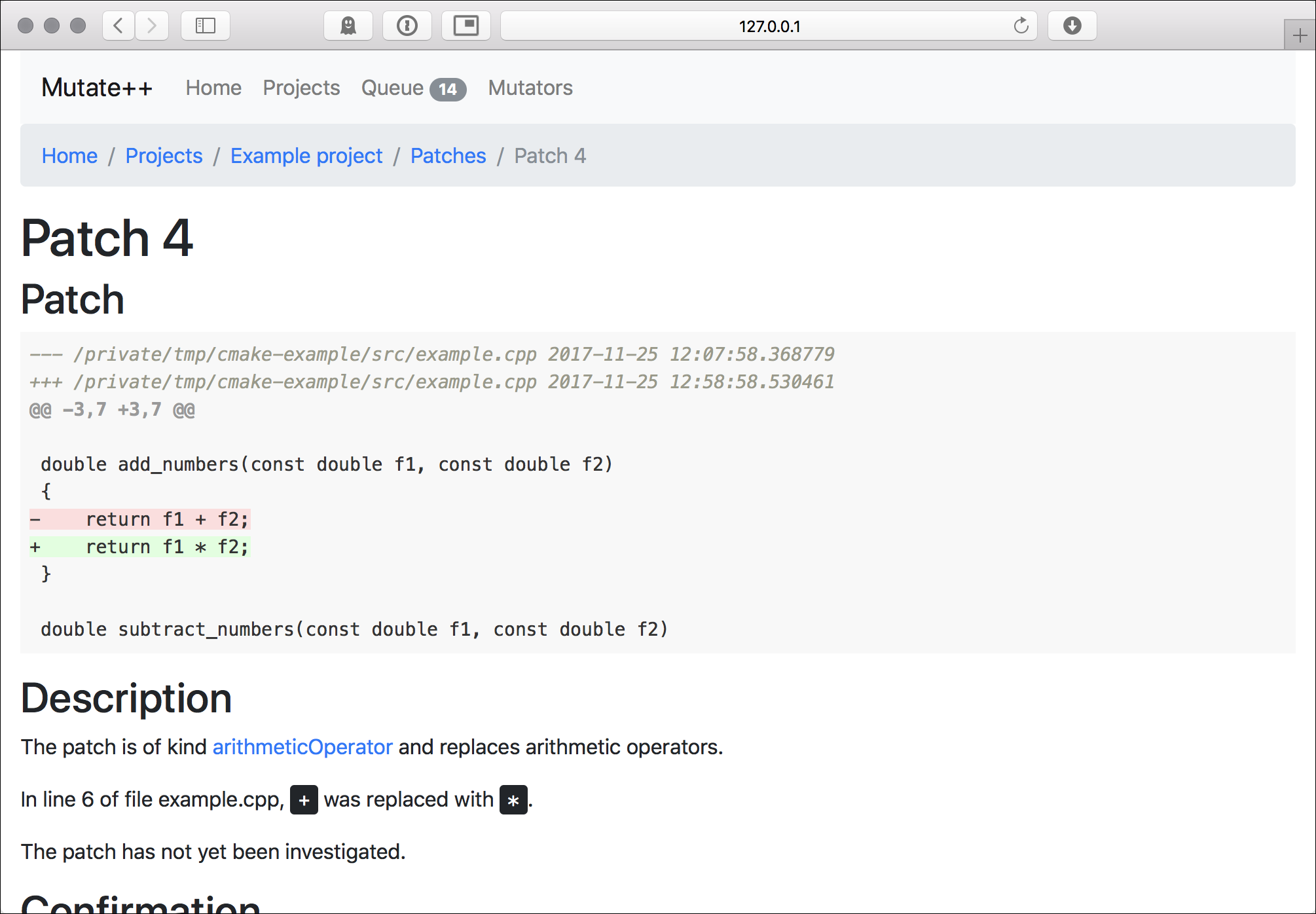 Let's now click on "4" to have a look at the details of a patch:

Go back to the project overview. 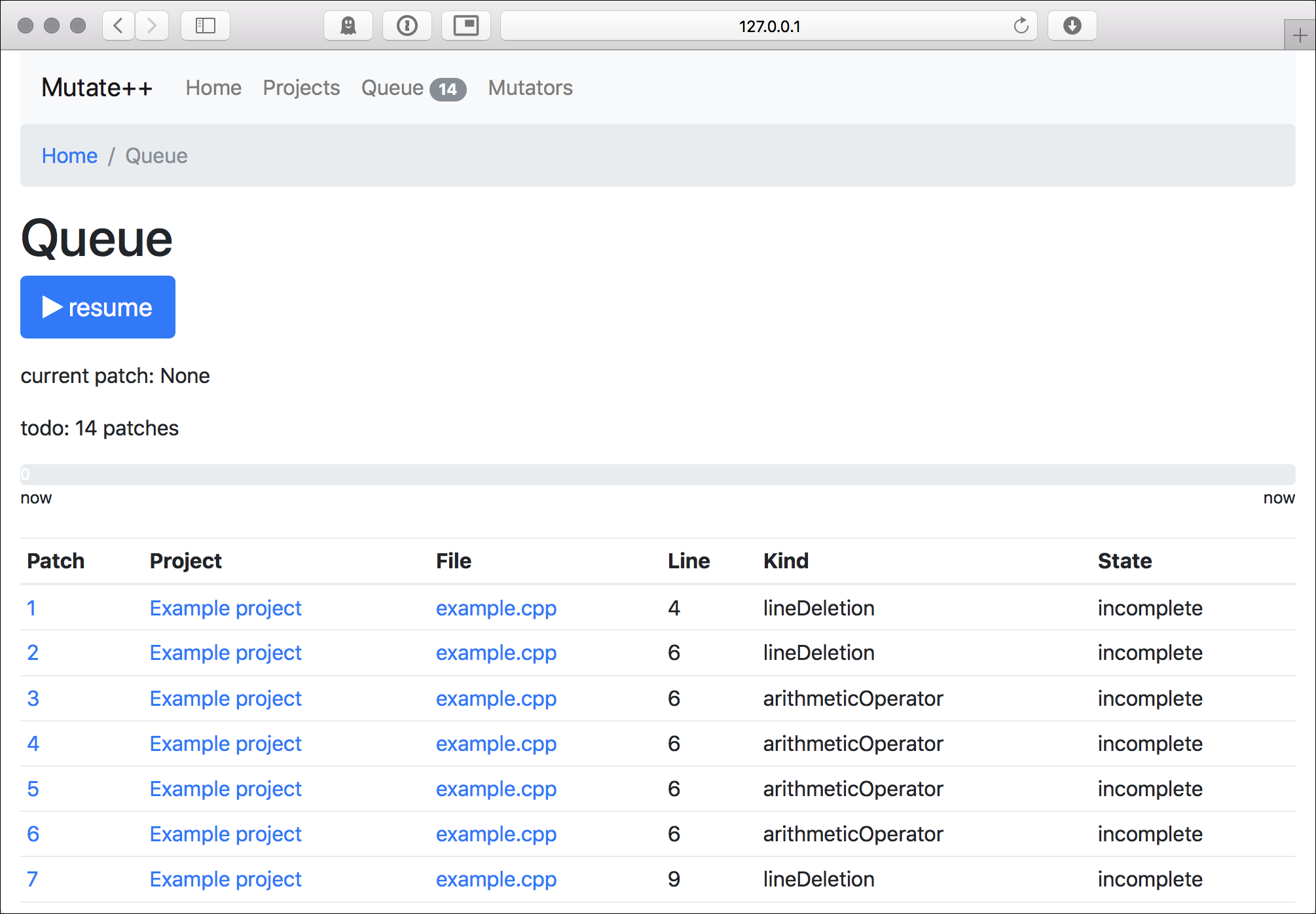 Now it is time to actually apply the patches: 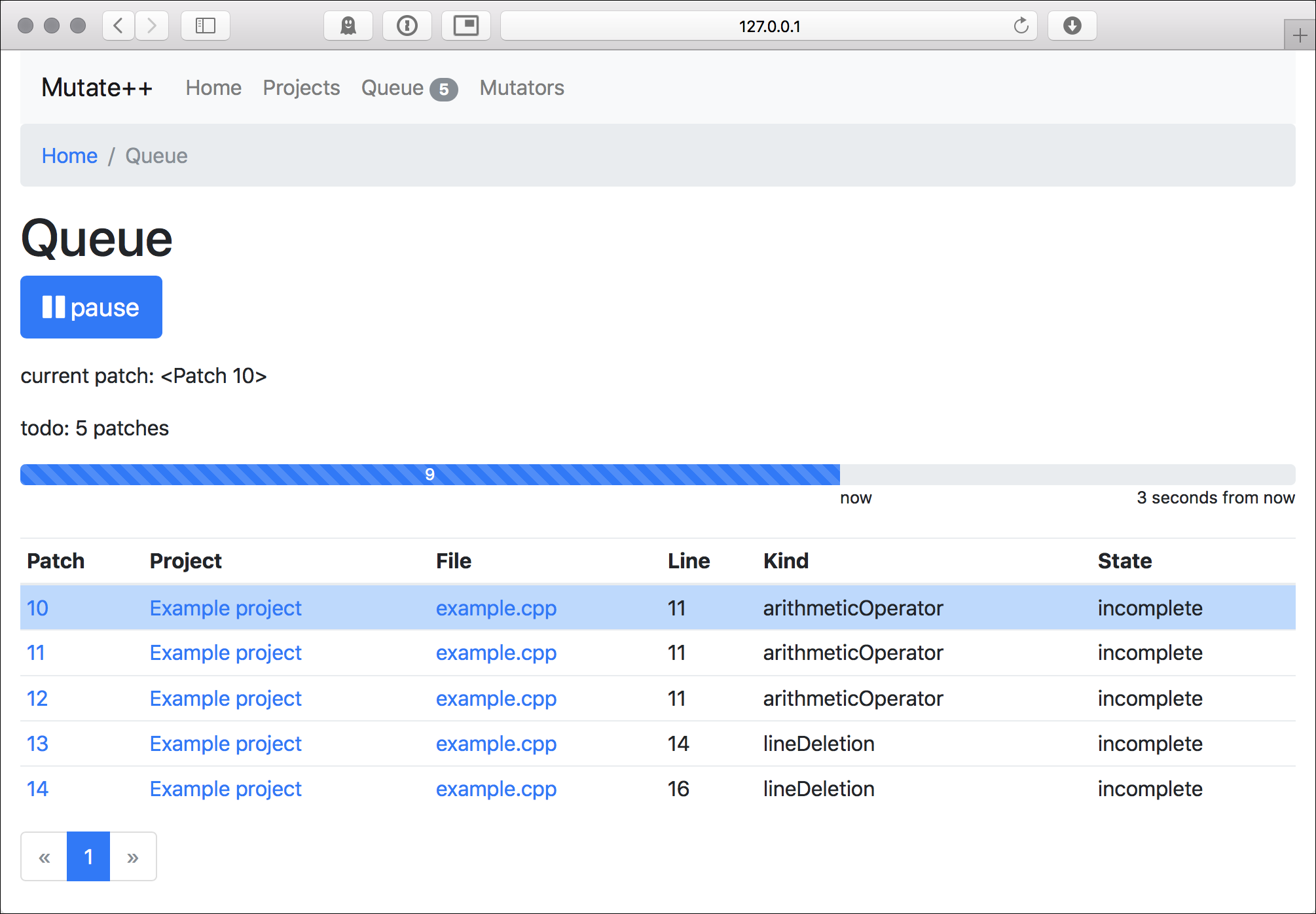 Go back to the project overview by clicking on "Projects" and "Example project". 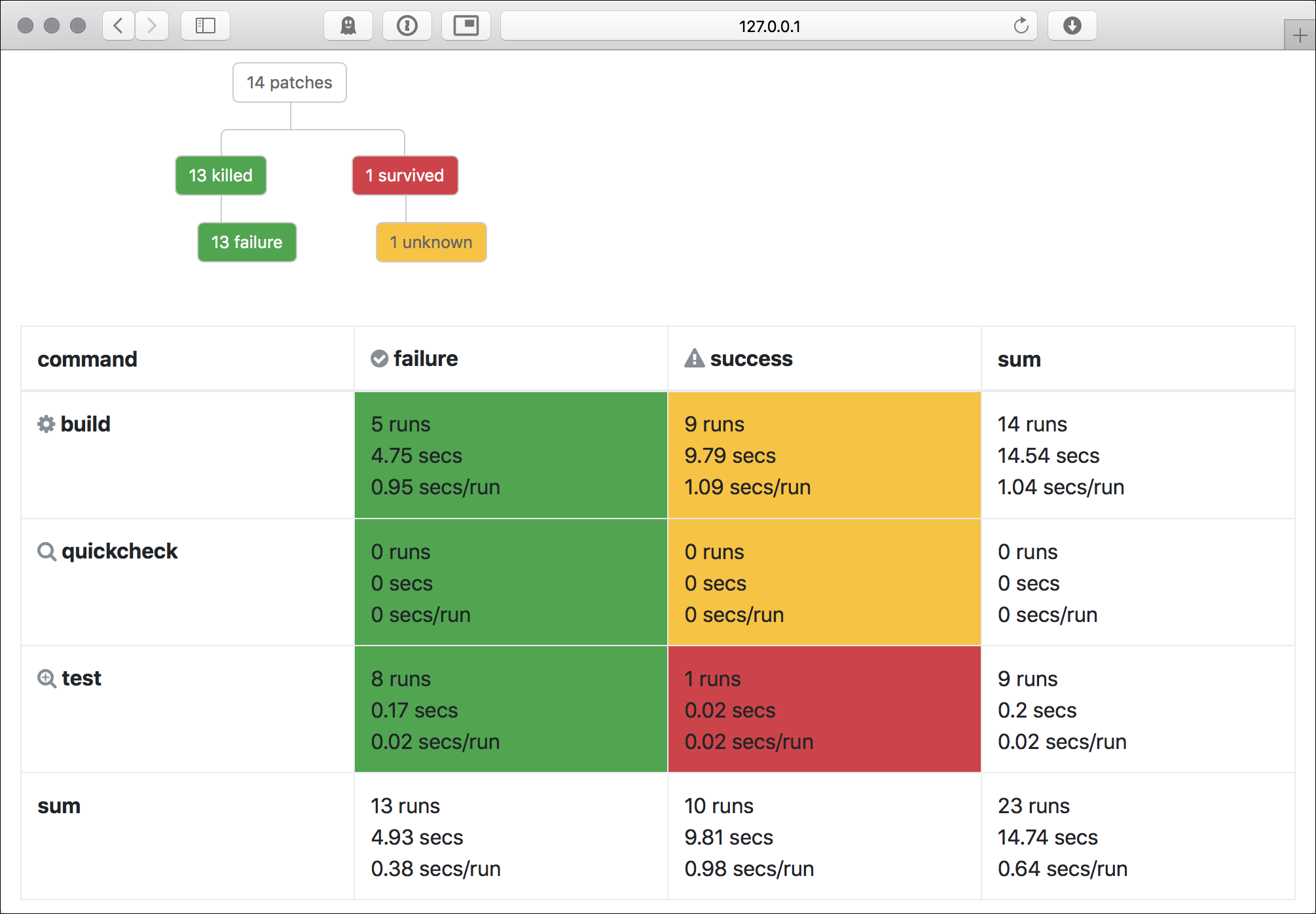 The Patches second got more colorful now. We see a graph that describes the breakdown of the patches:

Let's investigate this by clicking on "1 survived" to see the list of survived patches. We see that patch 14 survived. Click on "14".

In the patch overview, we see what happened:

Why is this an issue? Because no one noticed that we deleted the multiplication! The easiest way to fix this is by adding a respective test case. In larger projects, we do not want to switch back and forth between evaluating patches and fixing the test suite, so we set the patch "confirm" and press "Submit".

In some cases, the patch would change the source code in ways that it is natural that the test suite would not detect it, e.g. in parts of the code that are skipped by preprocessor directives (e.g. with #ifdef commands) or when, the patch results in equivalent code. In that cases, set the patch to "ignore".

Later, you can filter to show only the confirmed patches and adjust your test suite accordingly.

In the project overview, you also get some statistics on the execution: We see that 5 patches failed during the build, whereas 9 built successfully. From these 9, 8 failed the tests, and 1 patch succeeded.

Mutate++ is in a very early stage, and there is a lot to do. In particular, we are aware of severe limitations:

That said, pull requests and issues are more than welcome!

Mutate++ contains the following libraries for the frontend:

The web app uses Flask and SQLAlchemy, and a lot of other packages.

Permission is hereby granted, free of charge, to any person obtaining a copy of this software and associated documentation files (the “Software”), to deal in the Software without restriction, including without limitation the rights to use, copy, modify, merge, publish, distribute, sublicense, and/or sell copies of the Software, and to permit persons to whom the Software is furnished to do so, subject to the following conditions:

THE SOFTWARE IS PROVIDED “AS IS”, WITHOUT WARRANTY OF ANY KIND, EXPRESS OR IMPLIED, INCLUDING BUT NOT LIMITED TO THE WARRANTIES OF MERCHANTABILITY, FITNESS FOR A PARTICULAR PURPOSE AND NONINFRINGEMENT. IN NO EVENT SHALL THE AUTHORS OR COPYRIGHT HOLDERS BE LIABLE FOR ANY CLAIM, DAMAGES OR OTHER LIABILITY, WHETHER IN AN ACTION OF CONTRACT, TORT OR OTHERWISE, ARISING FROM, OUT OF OR IN CONNECTION WITH THE SOFTWARE OR THE USE OR OTHER DEALINGS IN THE SOFTWARE.

Get A Weekly Email With Trending Projects For These Topics
No Spam. Unsubscribe easily at any time.
c-plus-plus (17,930)
css (7,241)
mutation-testing (21)