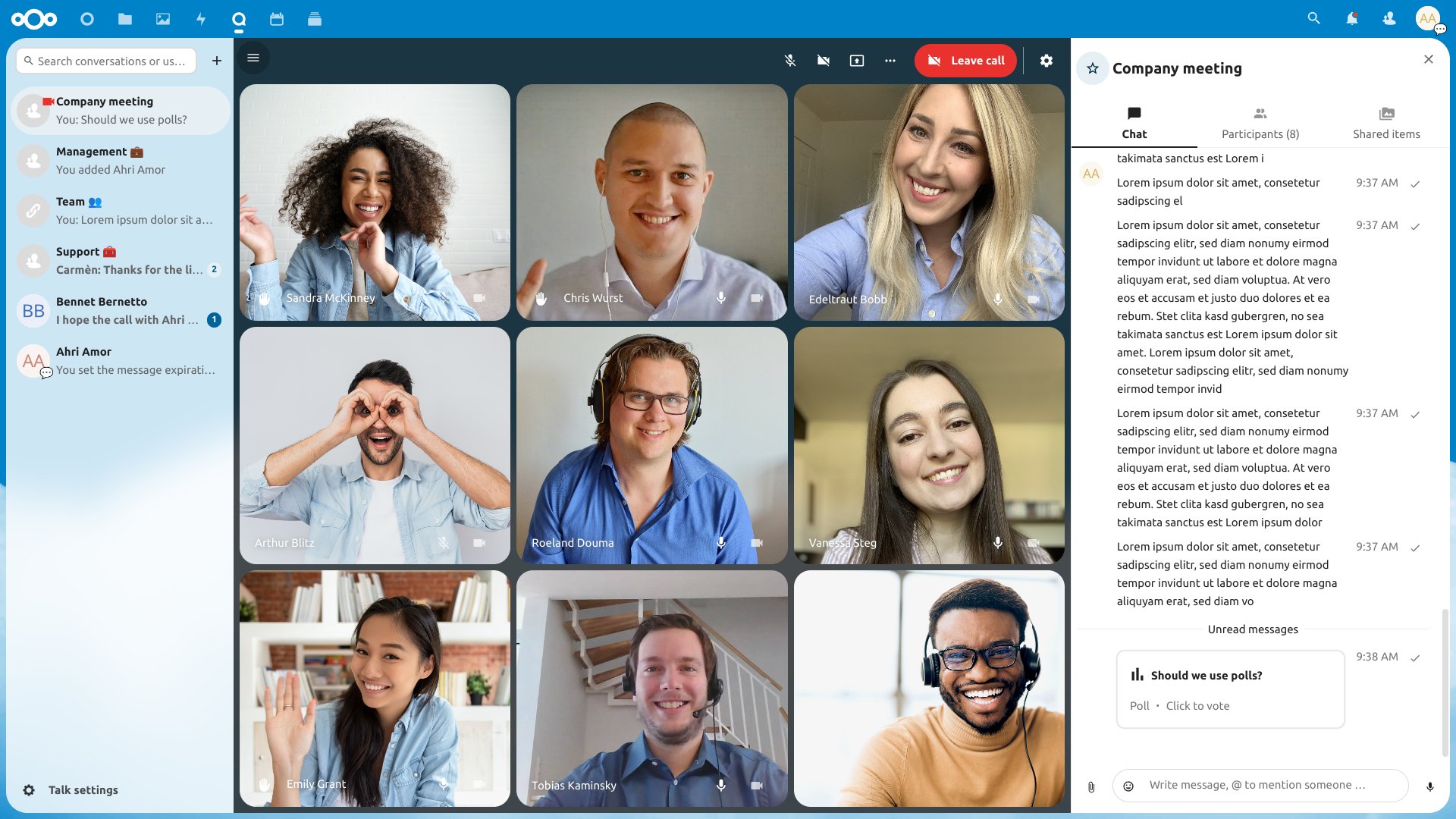 Why is this so awesome?

More in the works for the coming versions.

If you have suggestions or problems, please open an issue or contribute directly :)

Nextcloud Talk is really easy to install. You just need to enable the app from the Nextcloud App Store and everything will work out of the box.

There are some scenarios (users behind strict firewalls / symmetric NATs) where a TURN server is needed. That's a bit more tricky to install. You can find instructions in our documentation and the team behind the Nextcloud VM has developed a script which takes care of everything for you (vm-talk.sh). The script is tested on Ubuntu Server 18.04, but should work on 16.04 as well. Please keep in mind that it's developed for the VM specifically and any issues should be reported in that repo, not here.

Here's a short video on how it's done.

A single video stream currently uses about 1 Mbit/sec and the total required bandwidth can be calculated as follows:

This means that in a call with 5 participants, each has to send and receive about 4 Mbit/sec. Given the asymmetric nature of most typical broadband connections, it's sending video that quickly becomes the bottleneck. Moreover, decoding all those video streams puts a big strain on the system of each participant.

To limit and CPU bandwidth usage, participants can disable video. This will drop the bandwidth use to audio only, about 50 kbit/sec (about 1/20th of the bandwidth of video), eliminating most decoding work. When all participants are on a fast network, a call with 20 people without video could be doable.

Still a call creates a load on the participants' browsers (decoding streams) and on the server as it handles signaling. This, for example, also has consequences for devices that support calls. Mobile device browsers will sooner run out of compute capacity and cause issues to the call. While we continuously work to optimize Talk for performance, there is still work to be done so it is not unlikely that the bottleneck will be there for the time being. We very much welcome help in optimization of calls!

How to have the maximum number of participants in a call

To make sure a call can sustain the largest number of participants, make sure that:

With this setup, 20 users should be possible in a typical setup.

Scaling beyond 5-20 users in a call

Nextcloud offers a partner product, the Talk High Performance Back-end, which deals with this scalability issue by including a Selective Forwarding Unit (SFU). Each participant sends one stream to the SFU which distributes it under the participants. This typically scales to 30-50 or even more active participants. Furthermore, the HPB setup also allows calls with hundreds of passive participants. With this number of participants is only limited by the bandwidth of the SFU setup. This is ideal for one-to-many streaming like webinars or remote teaching lessons.

The HPB also takes care of signaling, decreasing the load of many calls on the Talk server and optional SIP integration so users can dial in to calls by phone.

If you need to use Talk in an enterprise environment, contact our sales team for access to the Talk High Performance Back-end. See our website for more details and pricing.

We are also available on our public Talk team conversation, if you want to join the discussion.

The API documentation is available here.

In the Talk app we have one branch per Nextcloud server version. stable* branches of the app should always work with the same branch of the Nextcloud server. This is only off close to releases of the server, to allow easier finishing of features, so we don't have to backport them.

You can always pick a task of any of the milestones and we will help you to get it into the assigned milestone or also an earlier one if time permits. It's just a matter of having an overview and better visibility what we think should be worked on, but it's not exclusive.

For more information please see the guidelines for contributing to this repository.