Qt.py enables you to write software that runs on any of the 4 supported bindings - PySide2, PyQt5, PySide and PyQt4.

Write once, run in any binding.

Qt.py was born in the film and visual effects industry to address the growing need for software capable of running with more than one flavor of the Qt bindings for Python - PySide, PySide2, PyQt4 and PyQt5.

Qt.py is a single file and can either be copy/pasted into your project, downloaded as-is, cloned as-is or installed via pip or conda.

Use Qt.py as you would use PySide2.

All members of Qt stem directly from those available via PySide2, along with these additional members.

Qt.py also provides compatibility wrappers for critical functionality that differs across bindings, these can be found in the added QtCompat submodule.

Between Qt4 and Qt5 there have been many classes and class members that are obsolete. Under Qt.QtCompat there are many classes with names matching the classes they provide compatibility functions. These will match the PySide2 naming convention.

This also covers inconsistencies between bindings. For example PyQt4's QFileDialog matches Qt4's return value of the selected. While all other bindings return the selected filename and the file filter the user used to select the file. Qt.QtCompat.QFileDialog ensures that getOpenFileName(s) and getSaveFileName always return the tuple.

These are the publicly facing environment variables that in one way or another affect the way Qt.py is run.

Members of Qt.py is a subset of PySide2. Which means for a member to be made accessible via Qt.py, it will need to (1) be accessible via PySide2 and (2) each of the other supported bindings. This excludes large portions of the Qt framework, including the newly added QtQml and QtQuick modules but guarantees that anything you develop with Qt.py will work identically on any binding - PySide, PySide2, PyQt4 and PyQt5. If you need to use such excluded modules with Qt.py, please see QtSiteConfig.py.

We call this subset "common members" and these can be generated by running the build_membership.sh script. The script will output all modules and members of each binding into individual JSON files. These JSON files are then compared and a common_members.json file is generated. The contents of this file is copy-pasted into the _common_members dictionary of Qt.py. Please note that the script will only use the very latest version of our Docker test suite to generate the common members subset, using the most up-to-date set of VFX Platform-stipulated software versions.

⚠️ The version of PySide2 used as reference is the one specified on VFX Platform, currently version is 2.0.x. But unfortunately, the version string of PySide2 is not yet properly maintained and the VFX Platform does not specifiy a explicit commit SHA for PySide2. Therefore, it could be difficult to know exactly which PySide2 is running on your system (unless you built it from source). In layman's terms; as PySide2 is in development and is continuously adding new support for modules, you may see differences between PySide2 built early in the year vs PySide2 built later in the year. The exact commit SHAs of PySide2 used by the Qt.py test suite can be reviewed in DOCKER.md. QtC implemented an alternative way to identify which version of PySide2 you are running. You can read more about that here.

Some bindings offer features not available in others, you can use __binding__ to capture those.

If your system has multiple choices where one or more is preferred, you can override the preference and order in which they are tried with this environment variable.

Using the OS path separator (os.pathsep) which is : on Unix systems and ; on Windows.

If you need to control the preferred choice of a specific vendored Qt.py you can use the QT_PREFERRED_BINDING_JSON environment variable instead.

This json data forces any code that uses import Qt or import myproject.vendor.Qt to use PyQt5(from x import Qt etc works too, this is based on __name__ of the Qt.py being imported). Any other imports of a Qt module will use the "default" PySide2 only. If "default" is not provided or a Qt.py being used does not support QT_PREFERRED_BINDING_JSON, QT_PREFERRED_BINDING will be respected.

Add or remove members from Qt.py at run-time.


If you need to expose a module that isn't included in Qt.py by default or wish to remove something from being exposed in Qt.py you can do so by creating a QtSiteConfig.py module and making it available to Python.

Finally, expose the module to Python.

In order to use these with Qt.py, or any other binding, one must first erase such traces and replace them with cross-compatible code.

Now you may use the file as you normally would, with Qt.py

The uic.loadUi function of PyQt4 and PyQt5 as well as the QtUiTools.QUiLoader().load function of PySide/PySide2 are mapped to a convenience function loadUi.

loadUi has two arguments as opposed to the multiple that PyQt ships with. See here for details - in a nutshell, those arguments differ between PyQt and PySide in incompatible ways. The second argument is baseinstance which allows a ui to be dynamically loaded onto an existing QWidget instance.

uifile is the string path to the ui file to load.

loadUi returns baseinstance, if baseinstance is provided. Otherwise it will return the newly created instance of the user interface.

If you're using PyQt4, sip attempts to set its API to version 2 for the following:

The PyQt and PySide bindings are similar, but not identical. Where there is ambiguity, there must to be a clear direction on which path to take.

There are cases where Qt.py is not handling incompatibility issues. Please see CAVEATS.md for more information.

Send us a pull-request with known problems here!

Send us a pull-request with your studio here. 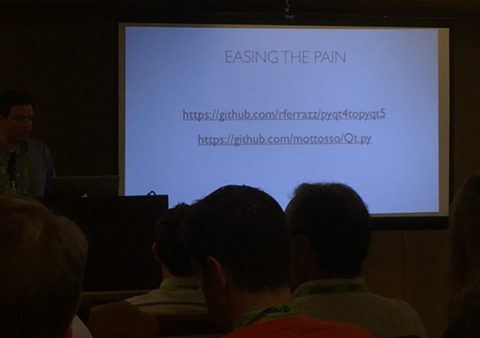 Send us a pull-request with your project here.

Also worth mentioning, pyqt4topyqt5; a good starting point for transitioning to Qt.py.

Send us a pull-request with your project here.

Tests are performed on each aspect of the shim.

Each of these are run under..

..once for each binding or under a specific binding only.

Each test is run within it's own isolated process, so as to allow an import to occur independently from other tests. Process isolation is handled via nosepipe.

Tests that are written at module level are run four times - once per binding - whereas tests written under a specific if-statement are run only for this particular binding.

Below are some of the conventions that used throughout the Qt.py module and tests.

Due to the nature of multiple bindings and multiple interpreter support, setting up a development environment in which to properly test your contraptions can be challenging. So here is a guide for how to do just that using Docker.

With Docker setup, here's what you do. Please note this will pull down a ~1 GB image.

Now both you and Travis are operating on the same assumptions which means that when the tests pass on your machine, they pass on Travis. And everybody wins!

For details on the Docker image for testing, see DOCKER.md.

See CONTRIBUTING.md for more of the good stuff.

To make a new release onto PyPI, you'll need to be mottosso and type this.