This app allows you to track team stats for social media.

Demo of App and CI/CD Pipeline

If you prefer to learn by video, check out this recording of a talk I gave at MongoDB.live in June 2020 entitled "DevOps + MongoDB Serverless = 😍". In the talk, I give a demo of this app and explain how the CI/CD pipeline is configured.

Note: At the time of the recording, the GitHub repos were handled differently. The Realm auto-deployment feature only worked from the master branch, so I had separate repos for Dev, Staging, and Prod. Since then, the Realm team has updated the auto-deploy feature so you can deploy from any branch in a repo. Now Dev, Staging, and Prod are stored in their own branches in this repo. The sections below explain the new way the code is stored in more detail. 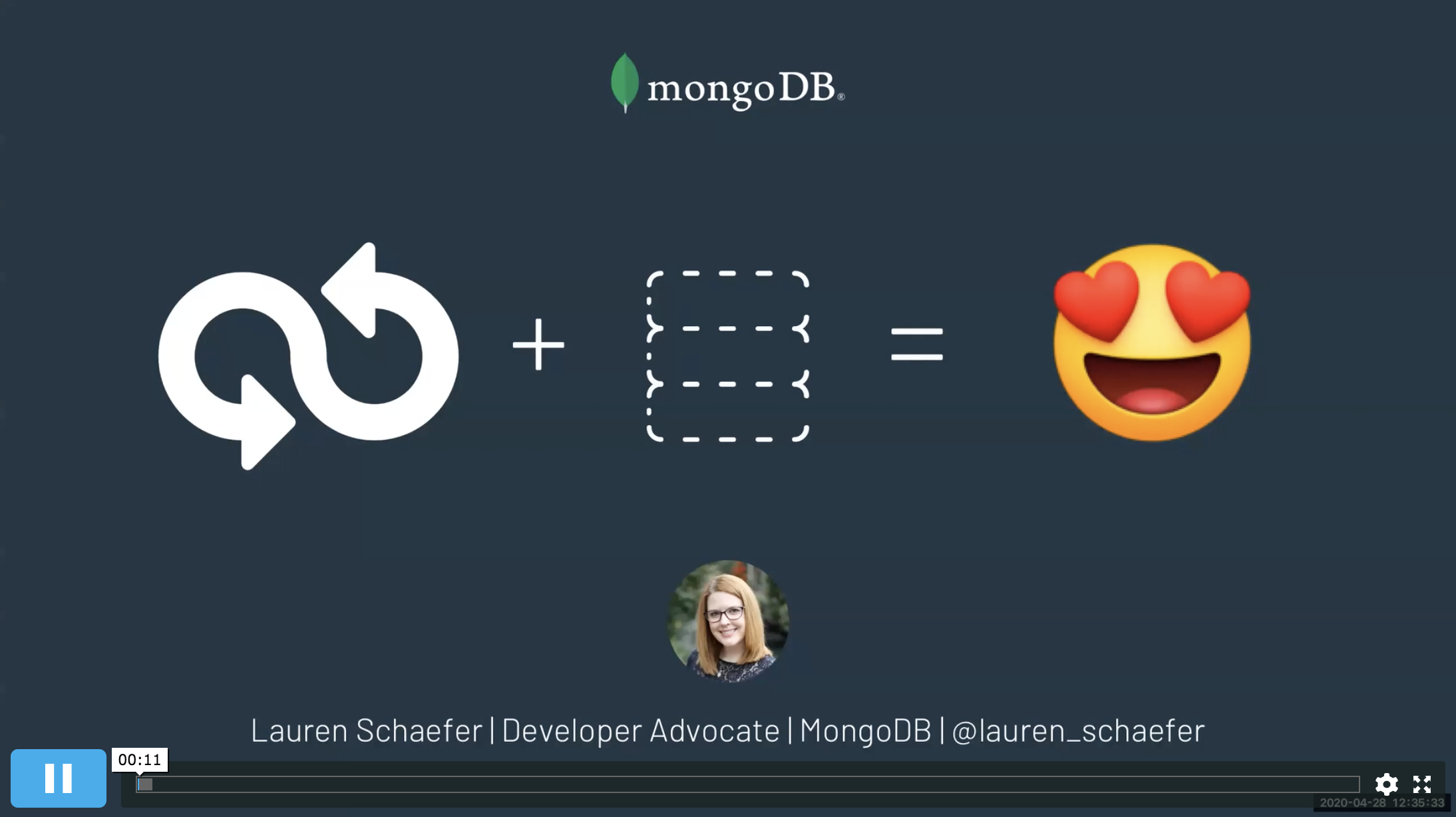 This is a super basic, super ugly app. But it works. The app currently consists of a page that allows users to upload their Tweet statistics spreadsheet (users can get a copy of this spreadsheet by visiting https://analytics.twitter.com/user/YOUR_HANDLE_HERE/tweets and choosing to download 28 days of stats by Tweet) and a dashboard where you can view charts about the Tweets. 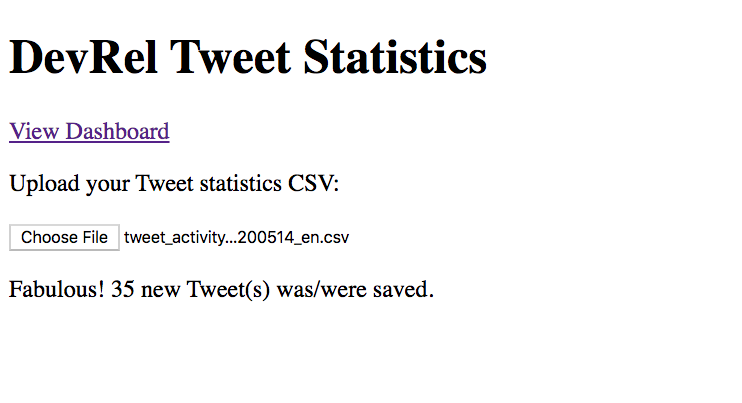 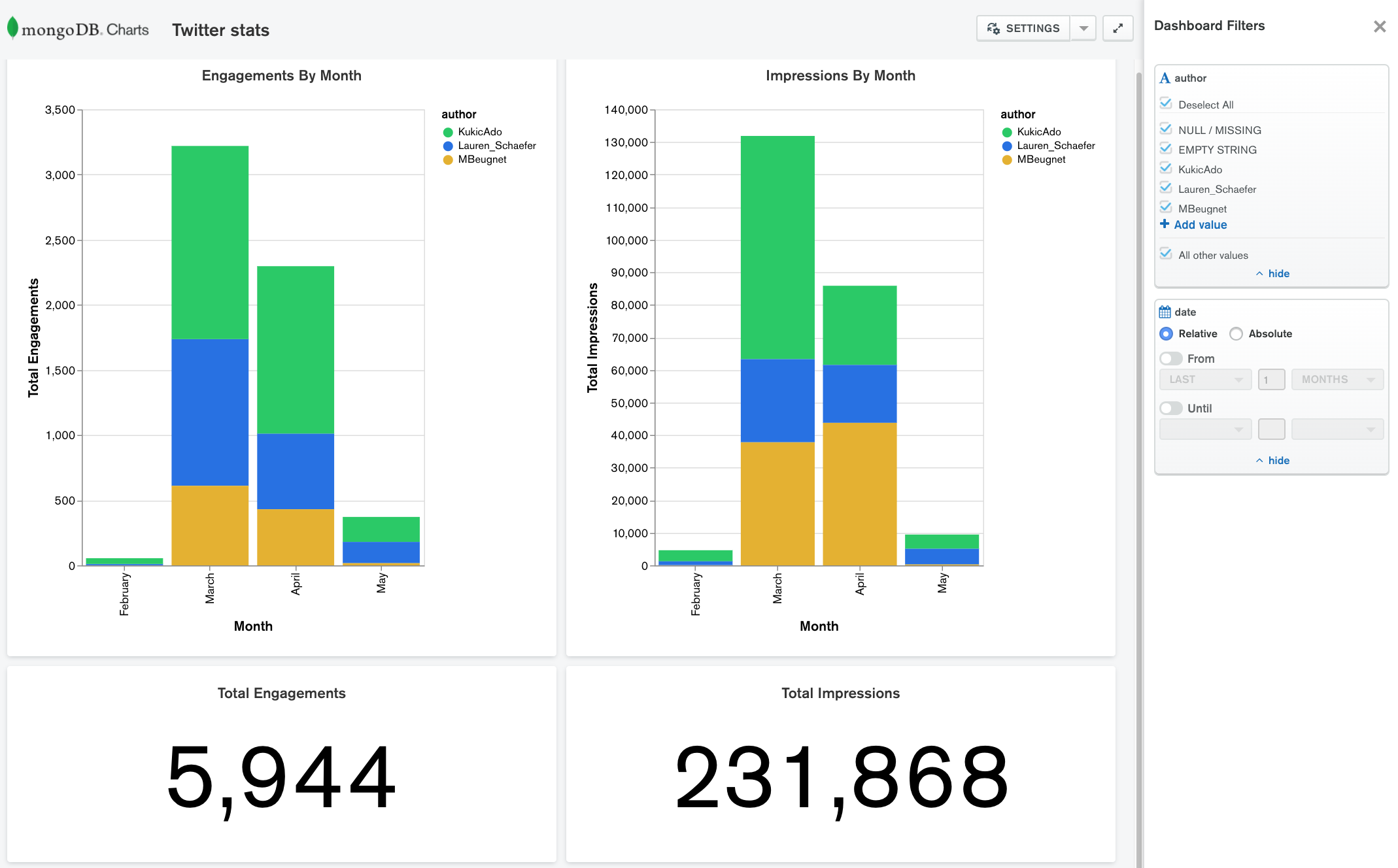 The app is built using a serverless architecture using MongoDB Realm. The app consists of serverless functions, a static web page, and a dashboard built in MongoDB Charts. 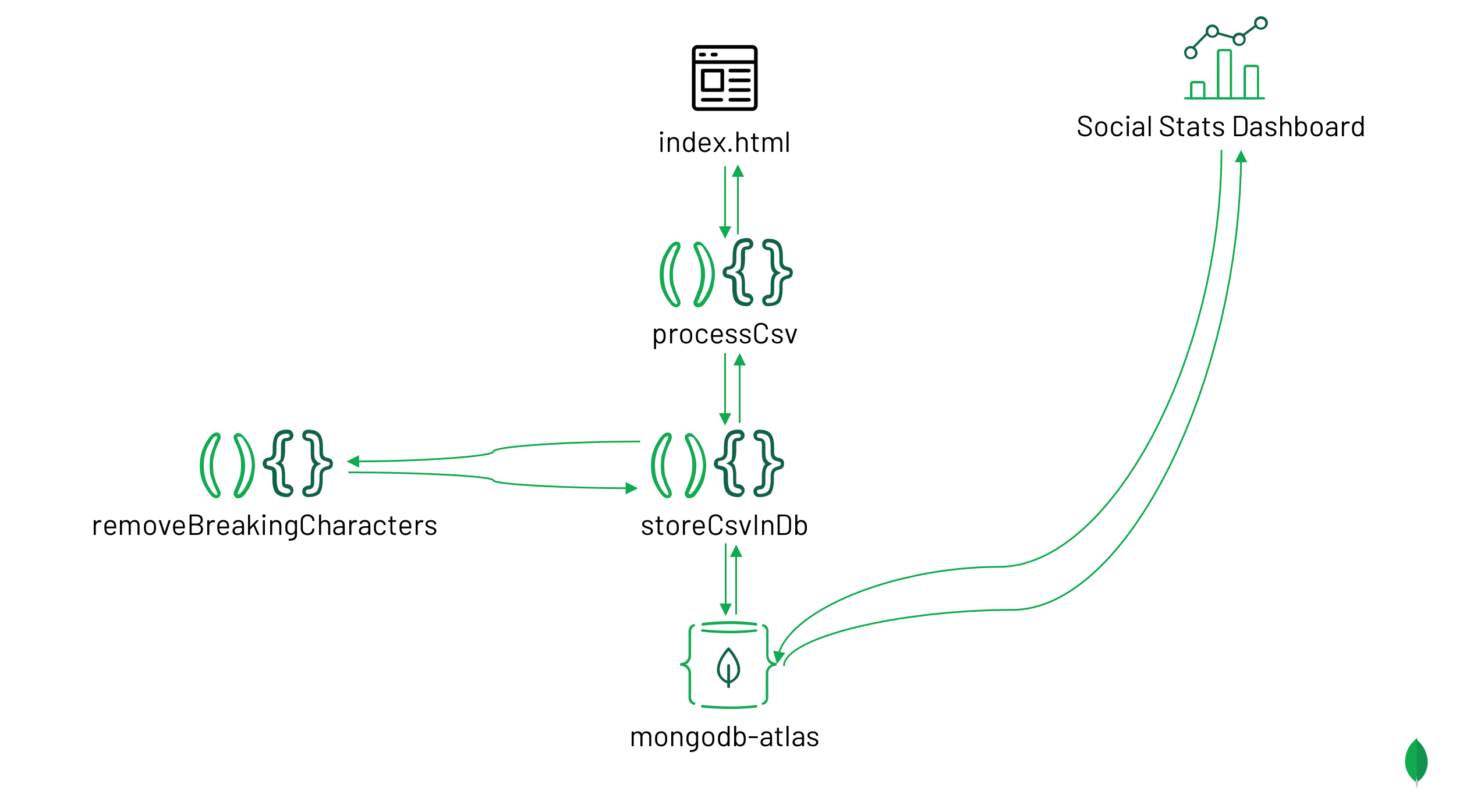 The storeCsvInDb function calls the removeBreakingCharacters function, which is a helper function that simply removes any bad characters from the Tweets. That function passes the results back to storeCsvInDb.

storeCsvInDB then converts the cleaned Tweet statistics to JSON documents and stores them in MongoDB Atlas.

Then the results are passed back up the chain and ultimately displayed on the webpage.

At a high level, the index.html file hosted on Realm calls a series of Realm serverless functions to store information in a database hosted on Atlas.

When we view the dashboard with all of the charts showing a summary of our Tweet statistics, we are accessing a MongoDB Charts dashboard. The dashboard pulls data from MongoDB Atlas and displays it.

The following is a list of variables you should add to config files and your Travis CI builds. An explanation of where to set these variables is described in detail in the following sections.

The app is tested with a combination of automated unit, integration, and ui tests. For more information about how the tests are architected, check out the following blog posts:

All tests are located in the tests directory. Many of the tests utilize constants from constants.js.

To execute all of the tests locally, you will need to do the following:

Unit tests for the serverless functions and the webhook are located in tests/unit.

Integration tests are located in tests/integration.

UI tests are located in tests/ui.

The tests are built using Jest and Selenium. The tests interact with the test database, so the tests cannot be run in parallel.

The tests currently test uploading a CSV file that contains stats about Tweets. The CSV files are stored in tests/ui/files.

I have created a CI/CD (continuous integration/continuous deployment) pipeline for this app.

My pipeline has four stages:

Below is a table the highlights what is happening at each stage and between stages. The following subsections go into more detail.

I do my development work locally on my machine.

Moving from Local to Development

When I'm ready to try out my code, I'm going to move from Local to Development.

Every developer has their own Development stage.

Moving from Development to Staging

When I feel like my code is well tested and I’m ready for a teammate to review it, I can move from Development to Staging.

Staging is a place for all of my teammates to merge our code together and see what it will look like in production.

Moving from Staging to Production

Since we’re following the continuous deployment model, we have a ton of automated tests. Our team has agreed that we feel confident that, if the tests pass, we are ready to deploy.

Production is the version of the app that my end users interact with.

The code is deployed to Realm using automated GitHub deployments.

This project uses Travis CI for builds. You can view the builds at https://travis-ci.com/github/mongodb-developer/SocialStats/branches.

The builds are responsible for running the appropriate automated tests and pushing code to the production GitHub repo. Note that the builds do NOT actually deploy the app. See the section above for how the app is deployed.

Before pushing your changes to your Development Repo, I recommend pulling the latest changes: git pull.

When you want to squash commits in your development branch, rebase against the staging branch:

The following steps will walk you through configuring the app for Production, Staging, and Development.

Then, complete the following steps for Prod (master branch), Staging (staging branch), and Dev (your development branch you created). Note that you only need to setup Prod and Staging once per team. Each team member will need to configure their own development branch.

After you've completed the steps above for each stage (Prod, Stage, and Dev), configure the app: