One liner for OSX

To get started please run:

Note: YADR will automatically install all of its subcomponents. If you want to be asked about each one, use:

Please do help us improving Linux support in this repo ;-)

TIP: You can check the Dockerfile to see what's need for a basic installation.

Wait, you're not done!

The esc key is the single most used key in vim. Old keyboards used to have Esc where Tab is today. Apple keyboards are the worst with their tiny Esc keys. But all this is fixed by remapping Caps to Esc. If you're hitting a small target in the corner, you are slowing yourself down considerably, and probably damaging your hands with repetitive strain injuries.

For OSX: with Karabiner Elements (you can install it via brew)

TODO / IDEA: Automate this step (saving Karabiner-Elements' .json and loading it after installing the app)

What is (this fork's version of) YADR?

I've been using Yadr since 2013 but since a couple of years ago my preferences and configurations started to diverge too much from upstream. So now my repo is barely mergeable with the original one. Although I'm still a contributor there, my main focus should on my fork (unless we converge again in the future of course :-)).

Here are the differences in a nutshell (also make sure you read the What's included, how to learn, how to customize? section):

What's included, how to learn, how to customize?

The best way to learn the answer the the above questions is to browse the README files in each directory (starting with this one). For example, if you're insterested in seeing which vim plugins are there, as well their keymaps, head to nvim/README.md and start from there, proceeding to its subfolders' README and finally to each configuration file (there will be more specific comments inside each file).

We can use Docker to test some changes in a Linux Container.

This will build the container image it never built it before (which may take a while -- future times will be faster) and then run a zsh session inside that container for you. There you can play around, test commands, aliases, etc.

Warning: this repo is primarly OSX oriented. So any support for Linux can only be done with the help of the community.

We have a basic automated CI testing for both Linux and OSX. Head to test/README.md for more details.

Here's how my zsh prompt looks like on iTerm: 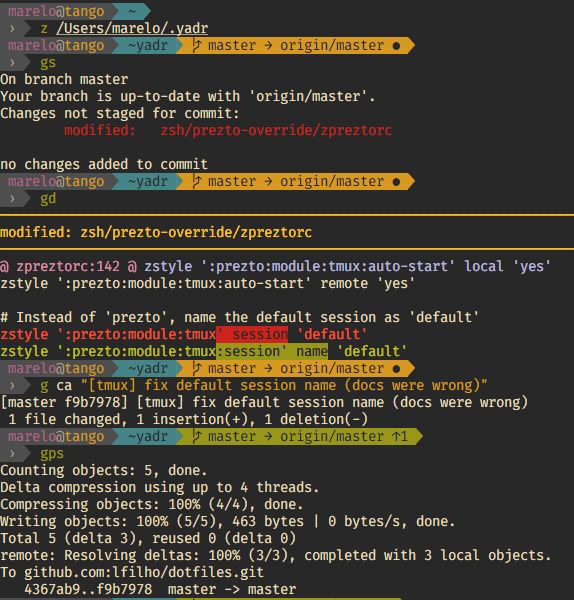 It's using Gruvbox colors. For screenshots on how Vim looks with Gruvbox, you can check their gallery out.

Also, the a osx file is a bash script that sets up sensible defaults for devs and power users under osx. Read through it before running it. To use:

These hacks are Lion-centric. May not work for other OS'es. My favorite mods include: