solid forged of unsigned int pieces of best wrought C, linked at the binary; tag line is made of one piece of code, compiled with -funroll-loops to the the rest of the window column and warranted with a permissive license. text window has sufficient refactoring done to insure stability and prevent SEGFAULTing; has ug, but perfectly written shell: rc; acme is linted and debugged by a special compiler so that there are no functions that return structures or integer and floating numbers in object code not converted to known formats and byte orders; config.h should be perfectly tempered by the user or it will fuck up. mkfiles are straight and true, so you will have no trouble on account of acme returning cryptic compiler errors and not compiling. 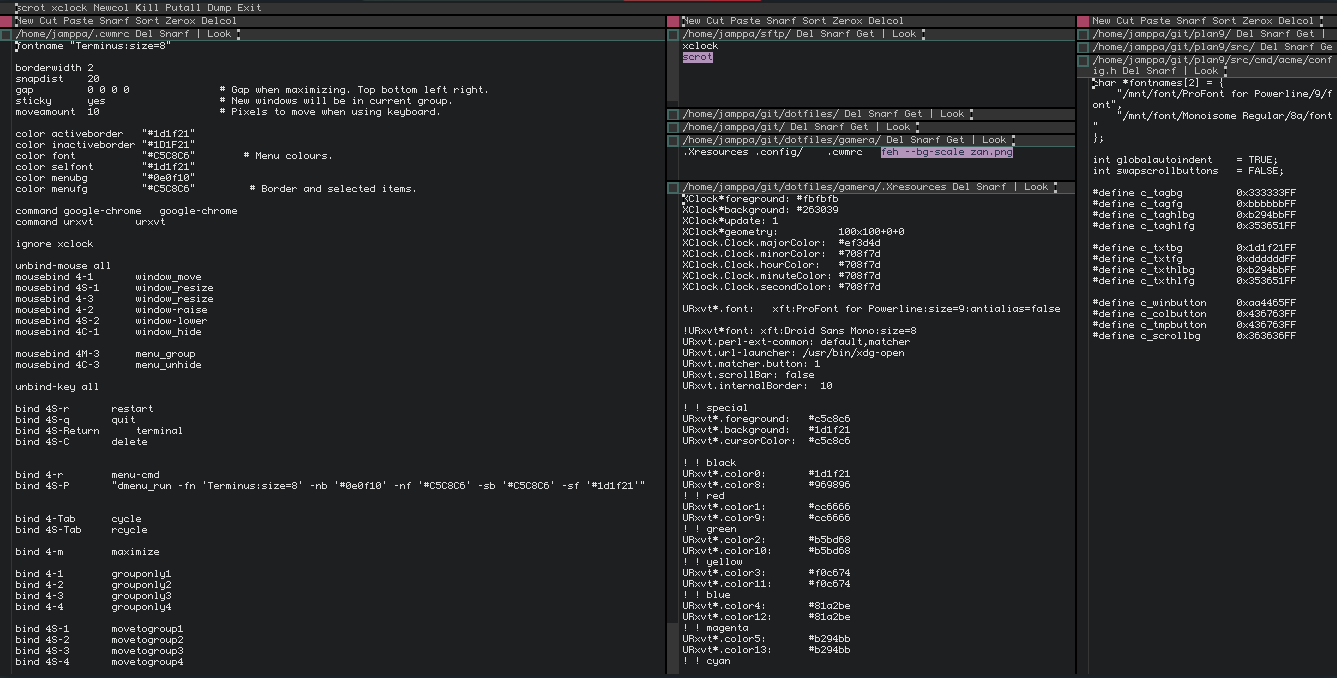 who needs syntax highlighting when this fine piece of work purrs and shows that these fangs got all kinds of shades of visceral strewn around, yet in finite enough of quantities to forbid you from not appreciating its scarcity, elevating it from a mere editor to a sublime Rothko, while emacs sinks in it's kitschy aesthetics, no matter how hard the themes try to salvage that bloated-out-of-proportions Titanic...

acme2k depends on plan9port which can be found here on github or on your local repository. i know debian has stripped plan9-userpace called 9base but i wouldn't roll the dice with this working with only it as a dependency. don't know; haven't a clue, now's your chance to feel useful and test it out. i mean if you feel like it.

after following the instructions in your $PLAN9-folder to run ./INSTALL and mk'ing every goddamn plan9-userspace application there happens to be ported, you can move right on to mangle the tightly-knit web these applications form with this very github project you've atleast been eyein': 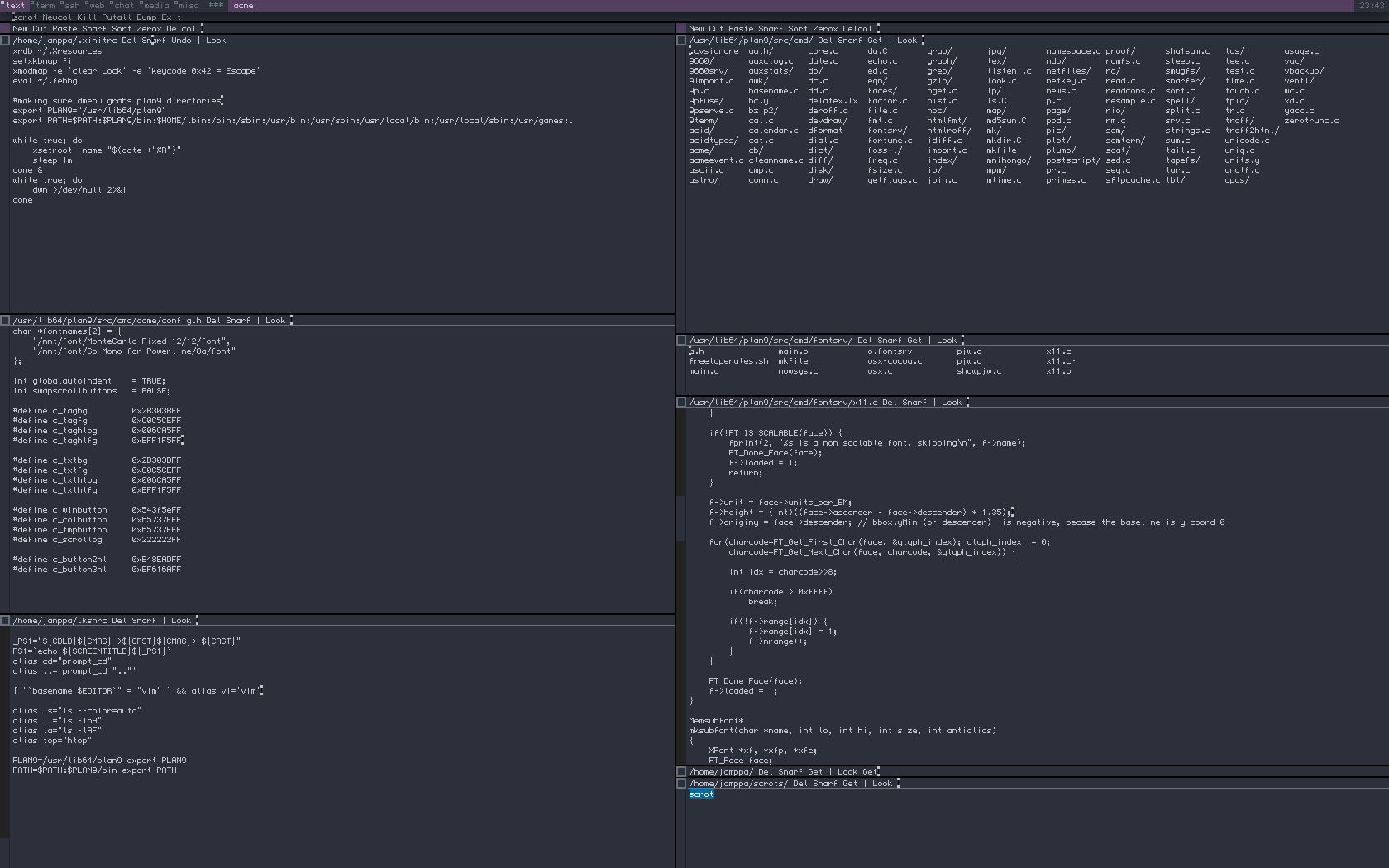 that low contrast base16-ocean soothes your senses with a subtle balance of peace, quiet and solitude to your zen-like coding session, where it is just you, your workflow and fingertips dancing on the keyboard in a polyrhythmic, primitive thumping fashion. truly gaia has blessed you with this editor.

now you can choose whether you want the highly experimental patched fontsrv/x11.c, which overrides the hardcoded dpi for font rendering etc. or would you rather leave the fontsrv untouched by a patch, that at worst can cause stability issues since i haven't had the chance to put it through the same wear and tear as the plan9port-devs have to the vanilla version.

So to sum what you could do for example:

you may need to build from the INSTALL-file located in the $PLAN9-root, but usually its enough to build from your recently replaced acme-folder, obviously not before editing the contents of config.h to your likings, it should be commented more than enough to explain what every little variable or #define does.

$GITPATH/colors are just some example colorschemes i've made, fiddled with and been juggling between.

config.h includes all the neccesary color and font modifications you just need to mk install it after every time you modify it, strongly inspired by suckless design philosophy of software. feel free to read more about it here.

you run fontsrv -p . to list all the available fonts from X11 to fontsrv; basically its only limited to your installed TrueType-fonts, so if you wish to use a bitmap font, make sure you specifically have the .ttf available; and then use the fonts in a format like this for example:

in this case the first option would stand for Monaco size 9 antialiased, the second for GohuFont size 9 aliased, ofc; or you can use the full path to your plan9 converted .font-file, found in this git repositorys font/ directory.

insert two fonts into config.h's font-array separating them with a comma. the first one is treated as a proportional width font and is used everywhere in acme, and by extension acme2k, by default. the second one can be activated for a specific window by executing Font from its tag window. 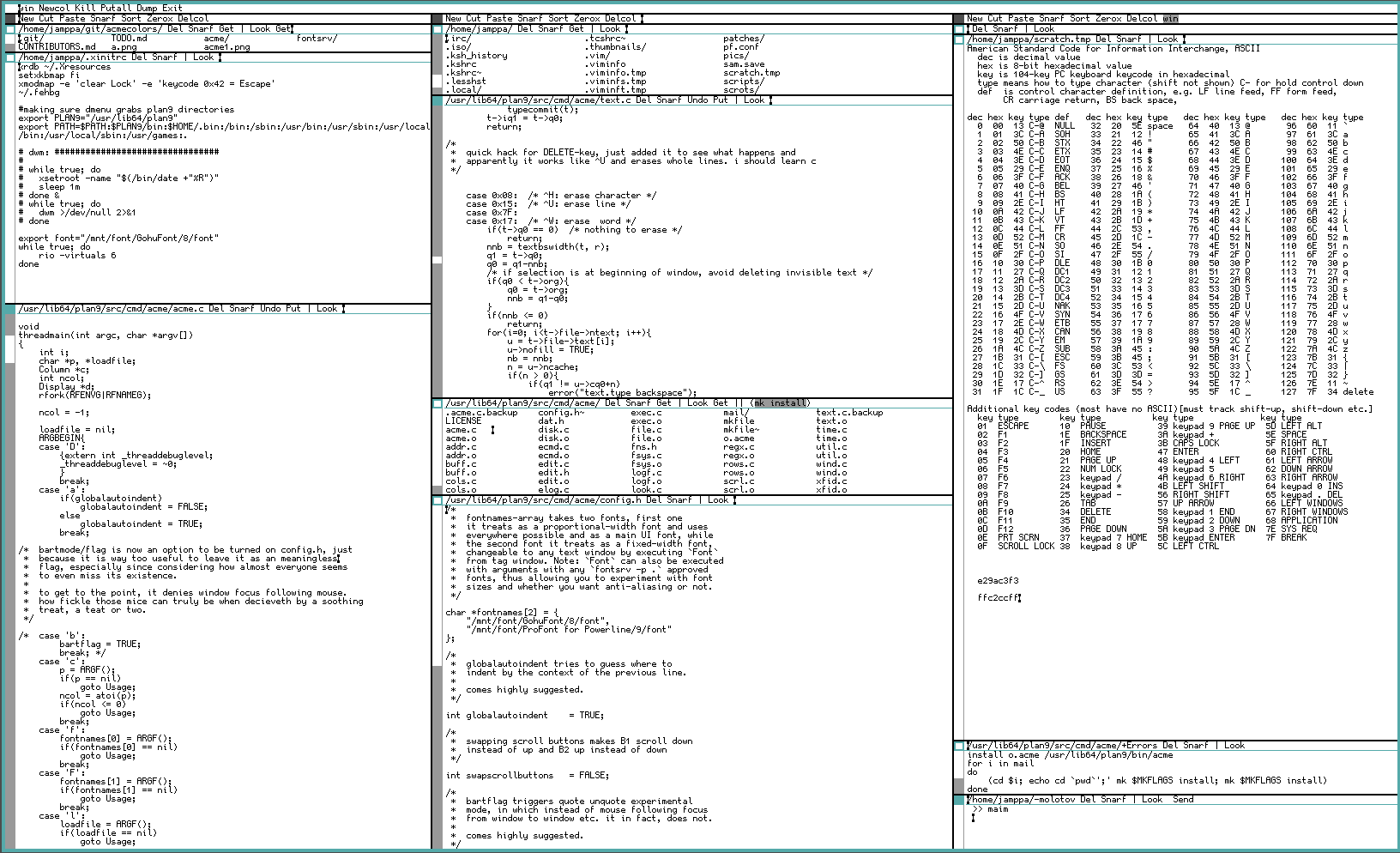 dont be shackled by dark hues and saturated pinks. make Glenda, the Bunny, proud by showing off the team colors aka the Rio Windowing Systems. "little black-on-white makes a little rob pike smile. when? every now and then!", or so ive been told.

colors need to be in the format of 0x*rgb hex color code*FF without the prefixed hashtag. i'd suggest just to experiment what all the #defines mean but to start you with something C_TAGBG means tag window background color. C_TXTBG means text window backgorund color. ...HLBG/FG means highlighted text background and foreground color etc. i've taken the liberty to comment all the color variations and what they affect on config.h's noticeable comment section.

but WHAT can I do

definetly check out TODO and feel free to chime in what would you like to see as a feature, add an issue or clone the repo and edit TODO.md and push it to the upstream, if all you want to do is add feature ideas. for bug fixes and coding features its better to contact me at:

or branch and send a pull request so i can check it out, dont worry ill always tip and youll get your name on the contributors list and you can for all i care, add your name on a comment preceding the codeblock in question, you know p. much what ever that doesnt harm the readability of the code, im all about you people having the respect you deserve for having partaken in such a sweet project.

Also, do check out #acme2k @ freenode to contribute and to take part in this community for us to build something together or to raise issues personally.

license (or whats the other one ive never heard of)

yeah no one's really heard of that other one, it was just a fucked up situation where plan9 guys' hands were forced by lawyers to use that for some reason. plan 9 also got gpl'd for some time but that version is meaningless and a joke afaik; up still here in github if it somehow jollies your gollies.

project is licensed as following (if ive understood correctly and this is allowed), the original unmodified plan9port being under lucent public license which specifically disallows any warranty, like every goddamn license in the whole goddamn universe and allows for me to sublicense it as i see fit so ive seen fit to specifically license my modest modifications under mit license, simply because it's more straightforward a permissive license and nobody really has to second guess what its trying to allow/disallow a developer and/or consumer to do.

ive yet to have had to think about accepting contributions from other licenses than lucent or mit since this is still in its faltering baby steps, but id still hope if you would think about trying to avoid having a deck of licenses to show instead of actual features in our repository.