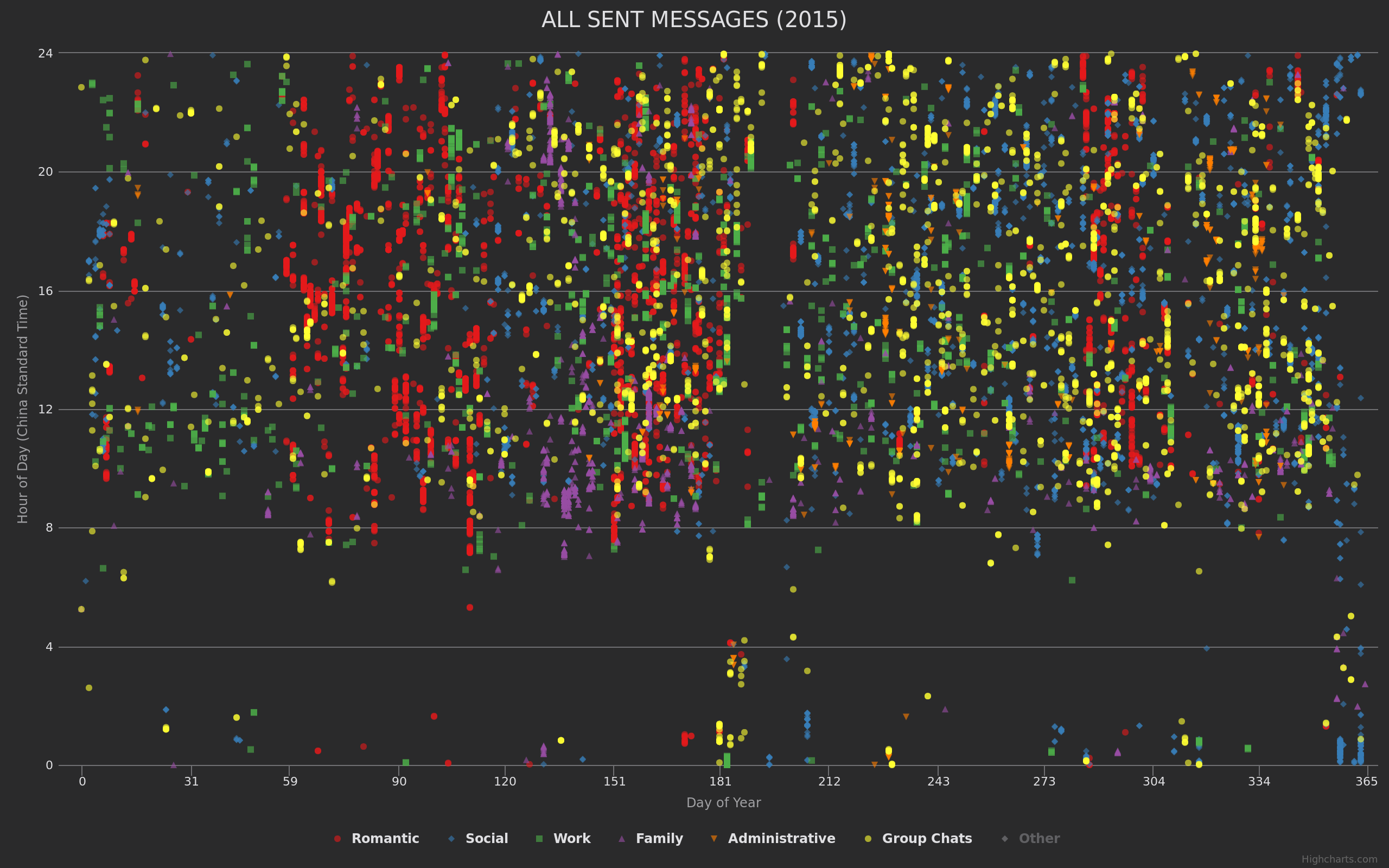 Quick-and-dirty Python script(s) for reading a pre-decrypted WeChat SQLite database and outputting some stats and visualizations based on them.

It's important to note that the database is a client-side database, which means it is authoritative only insofar as your mobile client (WeChat on your phone) observes the universe. Which is to say probably not very far. It is not in any way linked to any WeChat API (public or private) to provide truly authoritative server-side data. But if you use WeChat on your phone and have a significantly lengthy chat history, there will be a lot of cool data to visualize.

1. Get your hands on a decrypted database

If you have a rooted Android phone, go check out wechat-tools, which should make the job easier.

Go decrypt your database now. It might take a while to figure it out the first time, don't get discouraged. I'll wait here.

By the time you move on from this section, I assume you have a decrypted database, which should now be resident on the machine where you'll be running the Python scripts (i.e., you have transferred it to your computer and decrypted it, and probably in that order). To test this, you can run on most Linux machines:

... and it should give you a list of the tables in the database.

We only need a couple of things. This is as simple as:

It's up to you if you want to create a virtualenv for this project or install the dependencies globally.

To make the visualizations more useful, you should categorize your chat threads. This will allow you to see how much late-night romantic texting you do, for example. Or to prove to your boss that you really do spend a ton of time on work-related WeChats outside of office hours!

You should pick a threshold of threads you want to categorize. The recommended value is probably 80-90%. The principle here is that if you sort all your conversation threads by the number of messages you send, there will be some very popular threads at the front (friends and groups to whom you send a LOT of messages), and then towards the end there will be many, many threads which have only a message or two each.

In other words, it will be a relatively small task to categorize 85% of your threads by sent message volume, but that last 15% will be a ton of work because you'll be asked to categorize people who you barely chatted with.

This will automatically tally up messages across all threads in the database and then ask you to categorize the most active threads, in order, which make up 85% or more of your sent messages. You can create as many categories as you want.

If you want to change the threshold, run this instead:

A couple of things to note:

This will run a bunch of stats on your database for calendar year 2015. Outputs will be dumped in the local directory as chart0.html, chart1.html, etc.

The set of visualizations run, the manner in which you choose (or don't, as the case is currently) which visualizations to run, and the format and organization of the output are all ripe for huge improvement!

The following resources were invaluable in the development of this project:

Alternatives To WestatsSelect To Compare
Superset ⭐ 48,261
Apache Superset is a Data Visualization and Data Exploration Platform
dependent packages 2total releases 3most recent commit a day ago