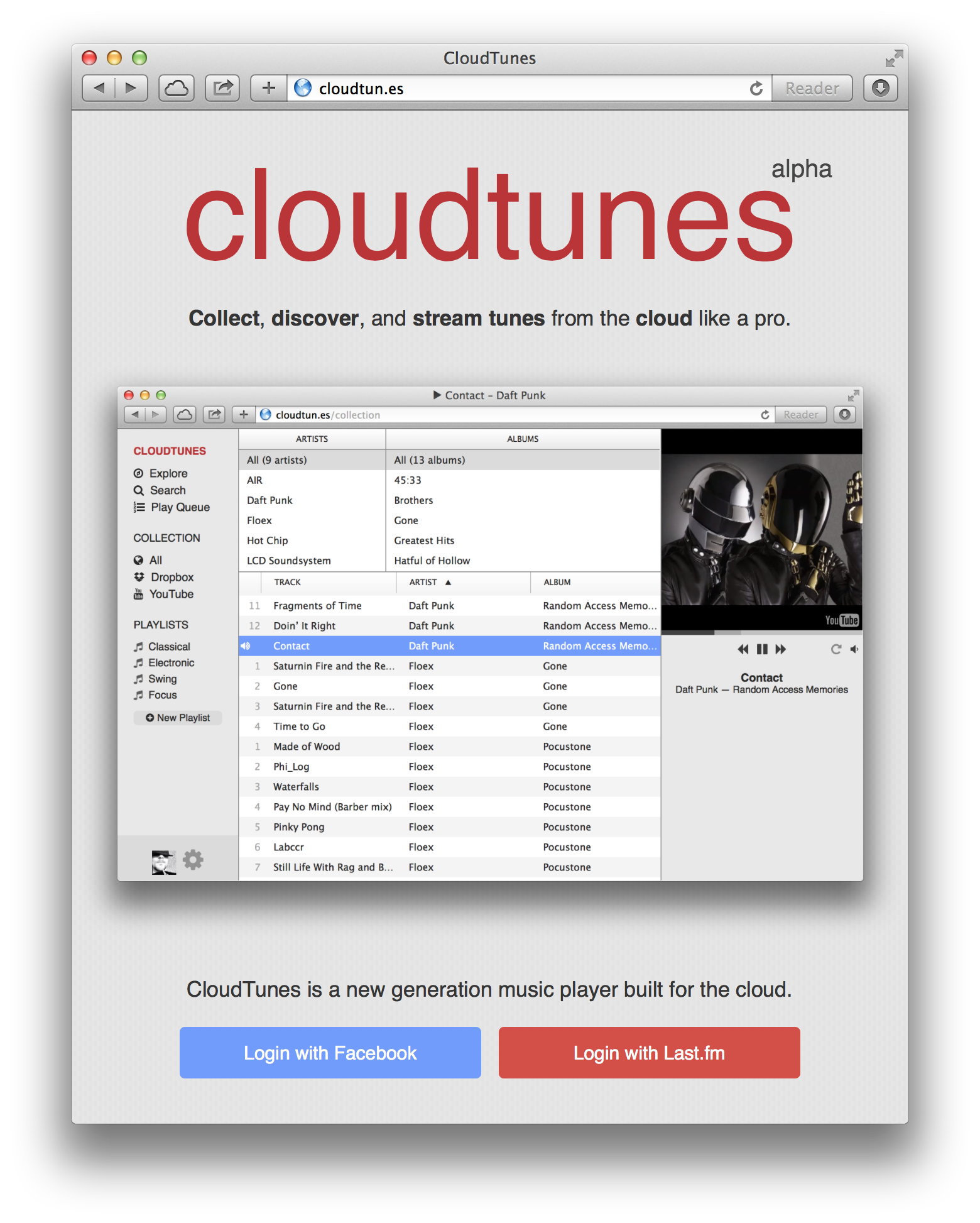 CloudTunes provides a unified interface for music stored in the cloud (YouTube, Dropbox, etc.) and integrates with Last.fm, Facebook, and Musicbrainz for metadata, discovery, and social experience. It is similar to services like Spotify, except instead of local tracks and the fixed Spotify catalog, CloudTunes uses your files stored in Dropbox and music videos on YouTube. 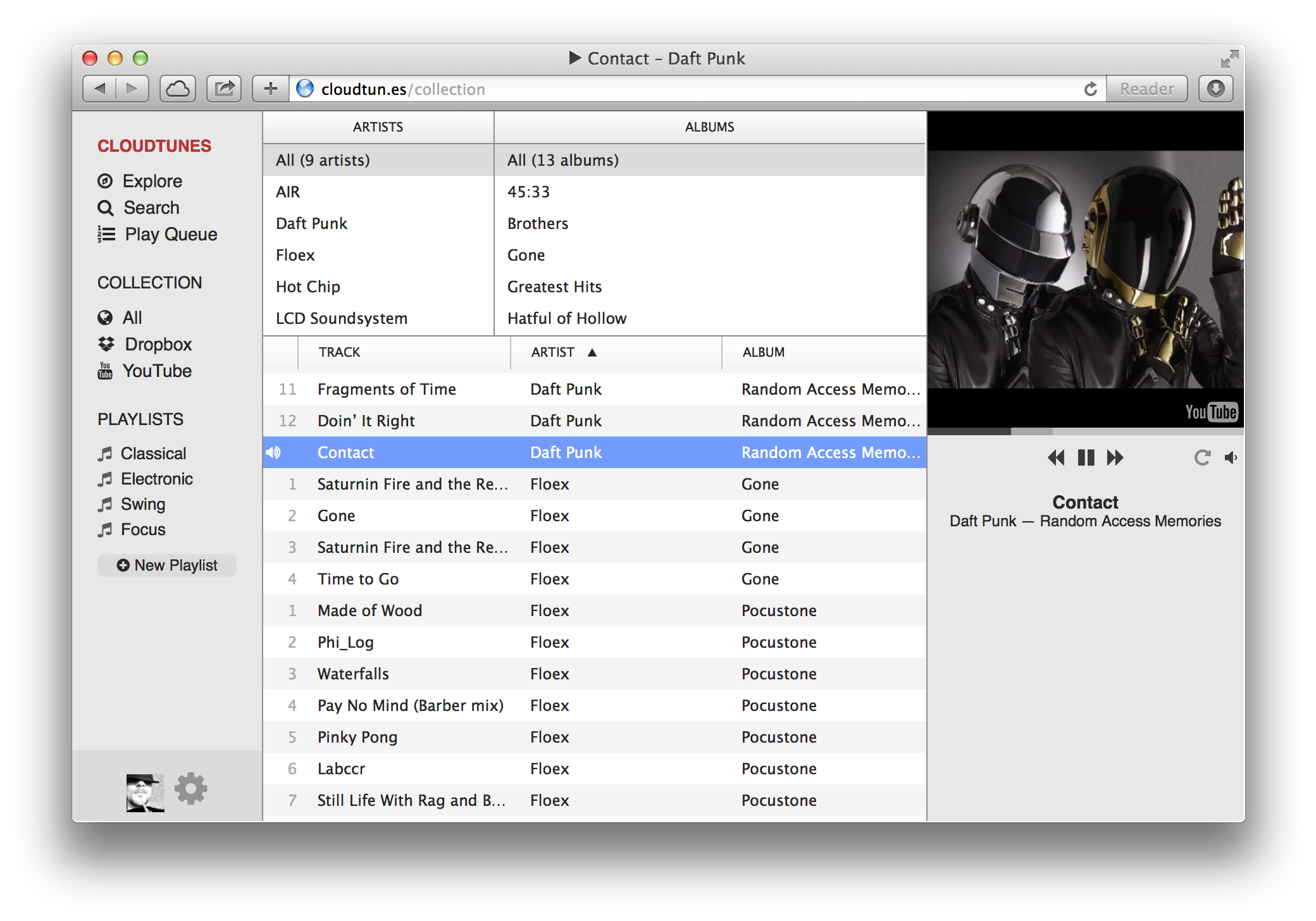 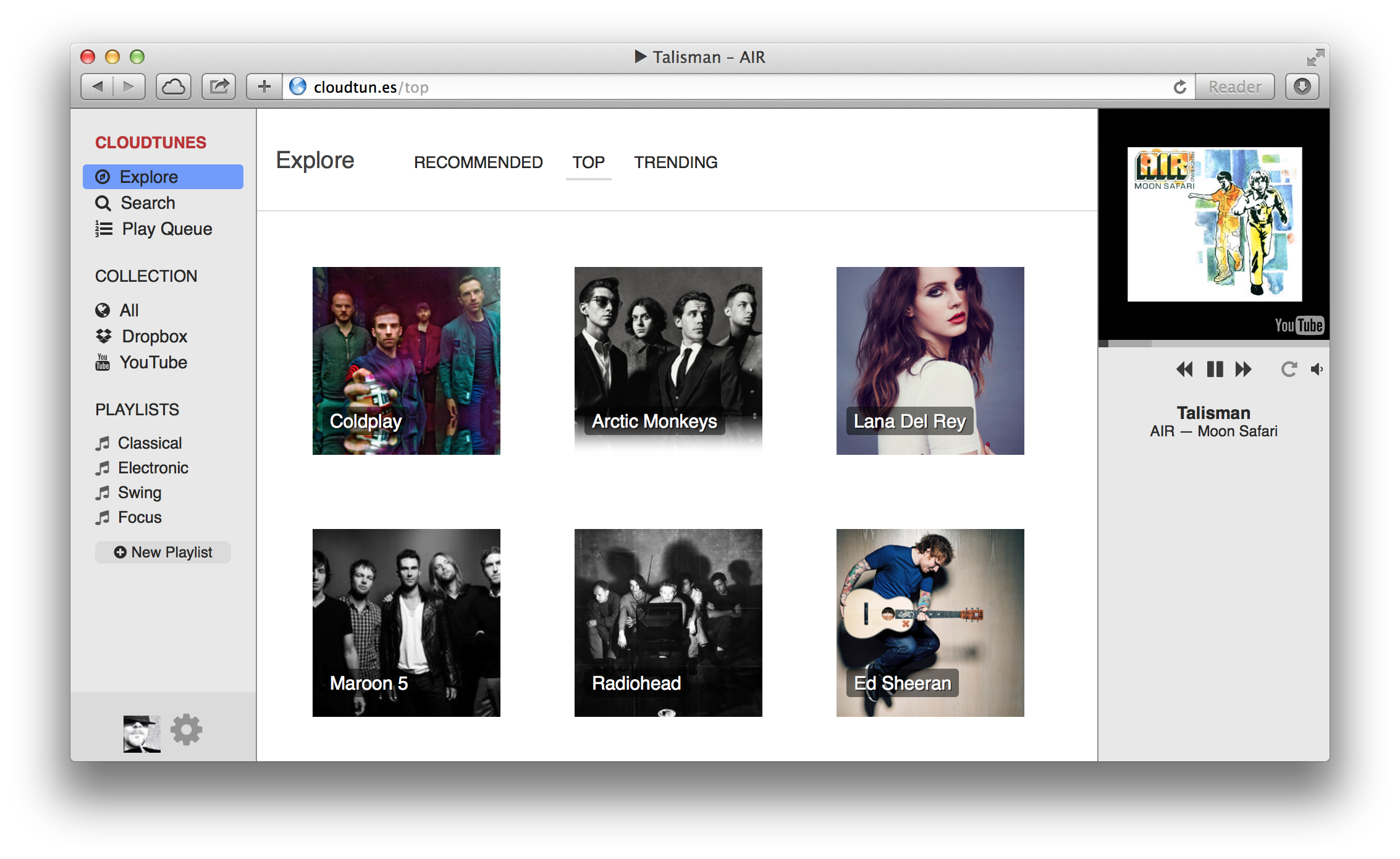 CloudTunes is a side project of @jakubroztocil who is a bit of a music nerd and who likes to build stuff. In 2012 he decided to create an iTunes-like webapp to make music stored all over the cloud easily discoverable and accessible: hence CloudTunes.

Another one of the goals was to experiment with a bunch of new technologies. Later, this side-project was largely abandoned due to other more pressing projects. In the autumn of 2014, CloudTunes was open-sourced "as is" (i.e. alpha quality, lack of polish, tests and docs).

The architecture consists of a server and client component. Those two are decoupled and communicate via a JSON REST API and a WebSocket connection: 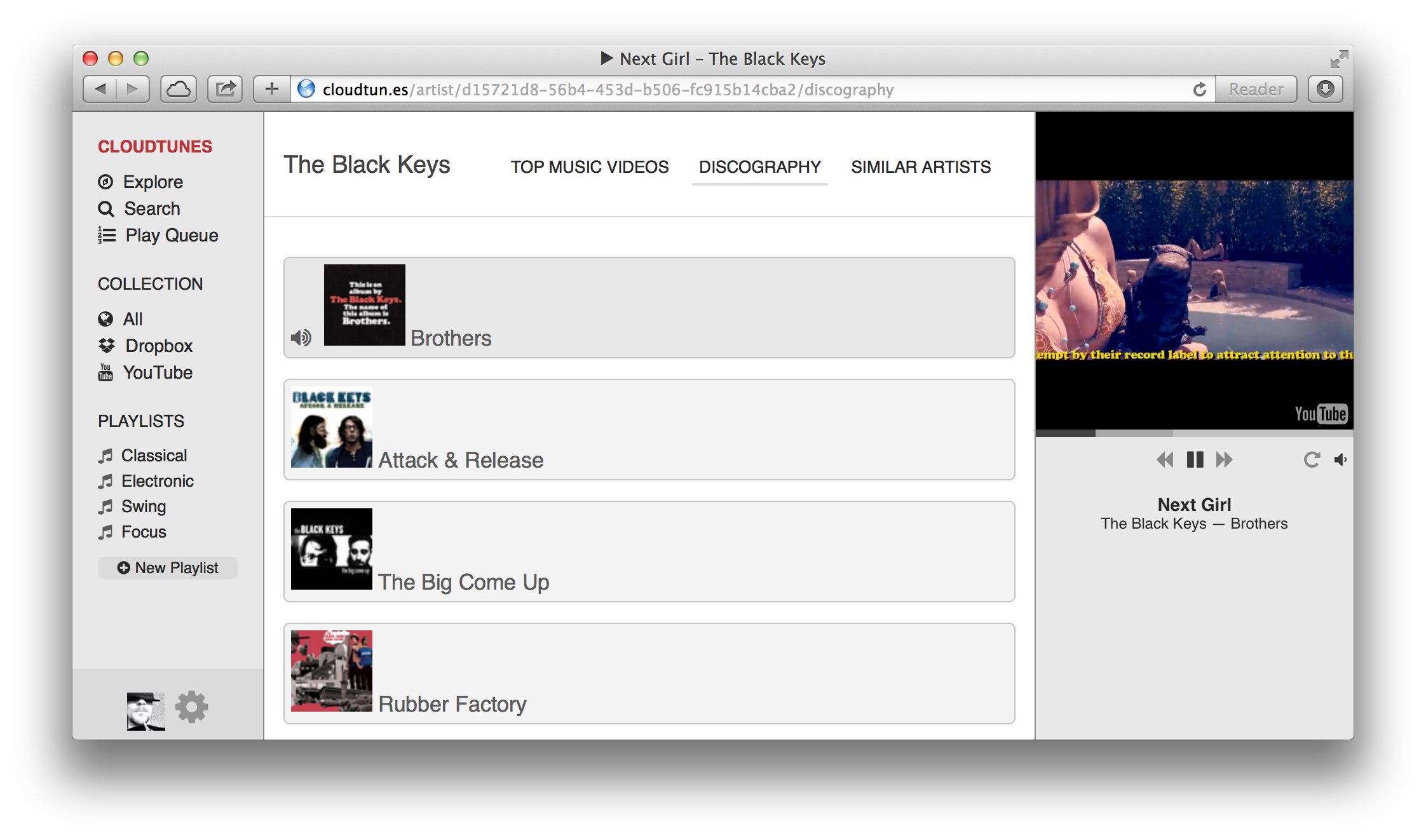 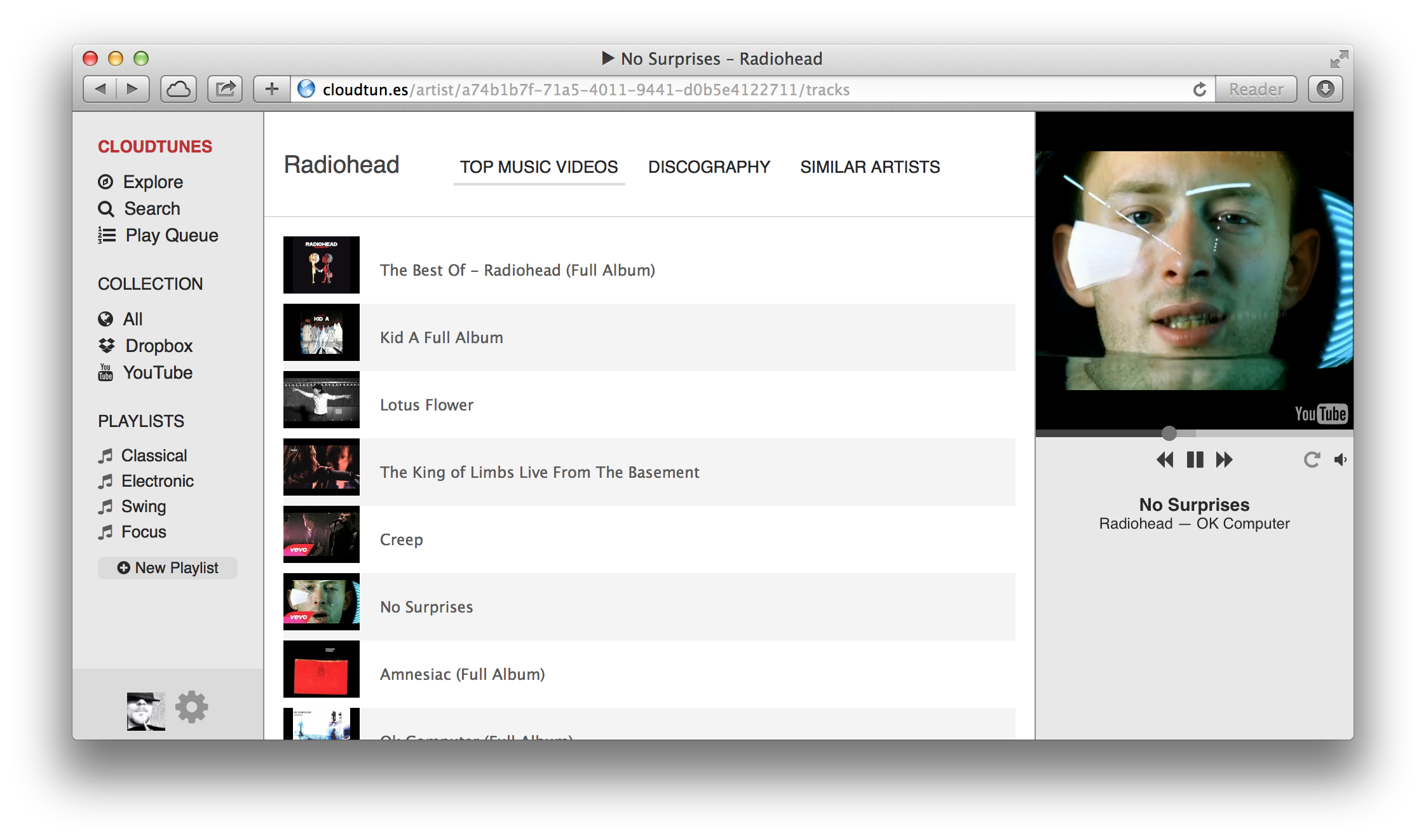 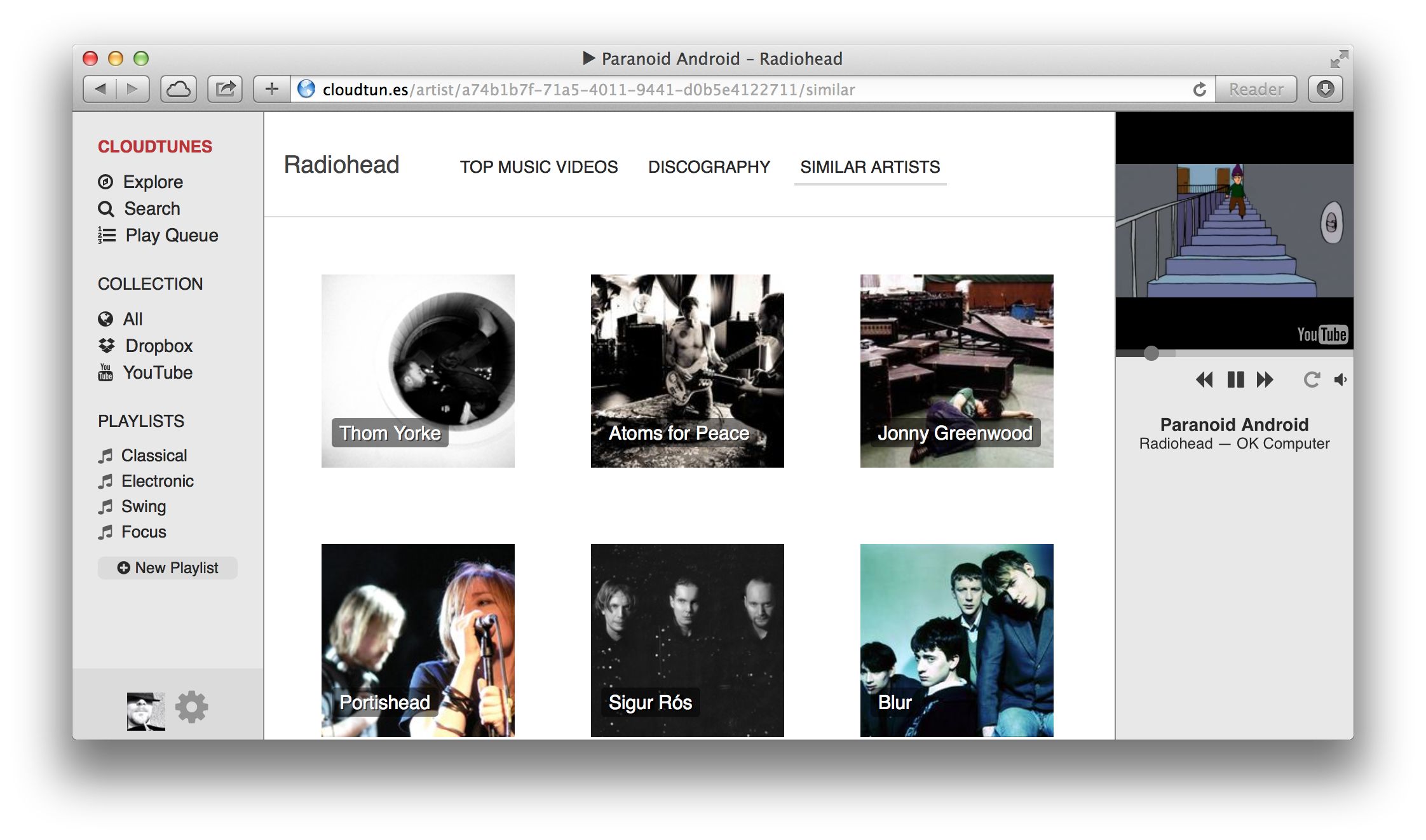 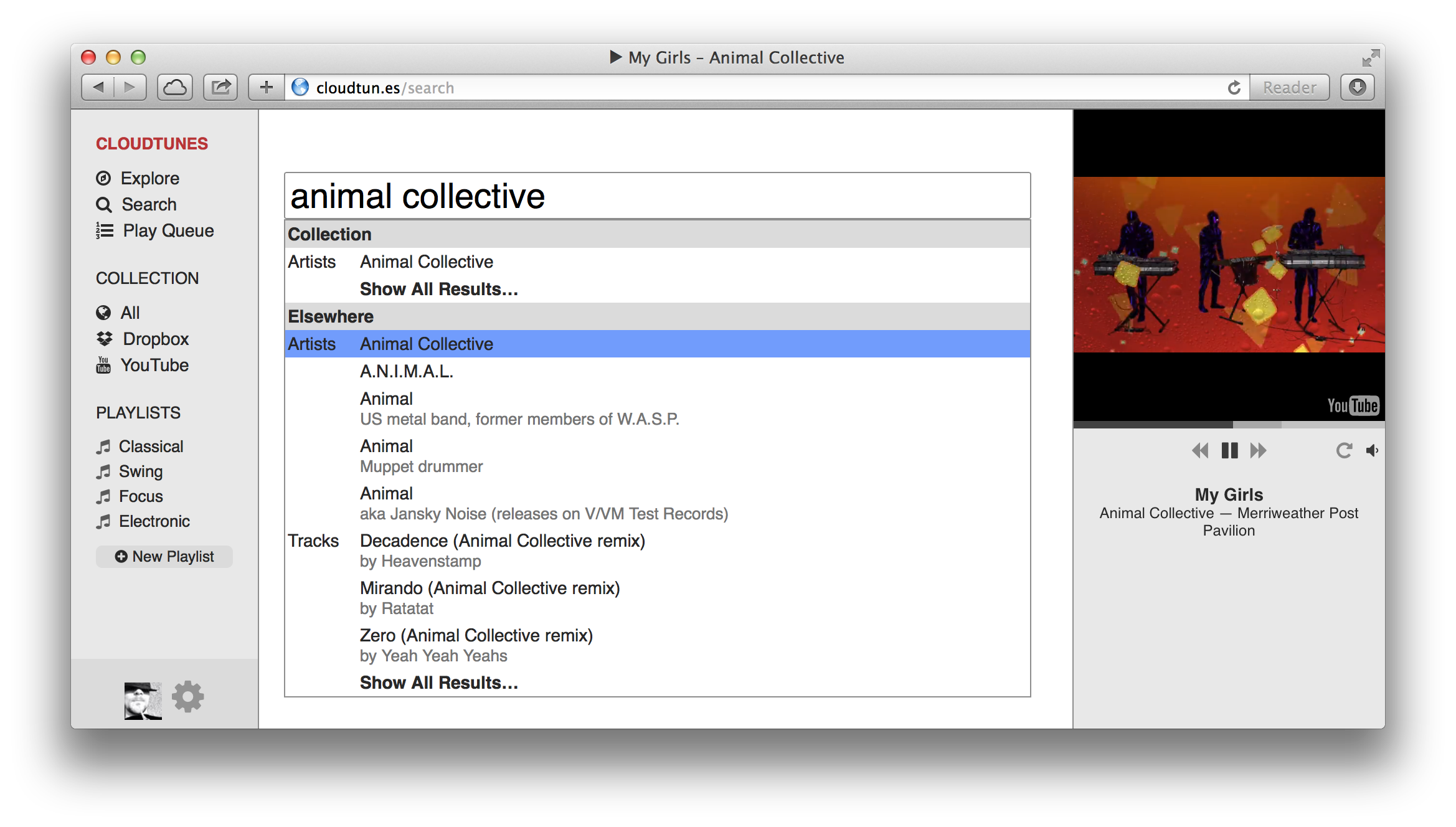 Any album or track you like can be added to your collection or any of your playlists.

Access and stream music that you already have in Dropbox from any computer. Fast indexing and realtime updates. 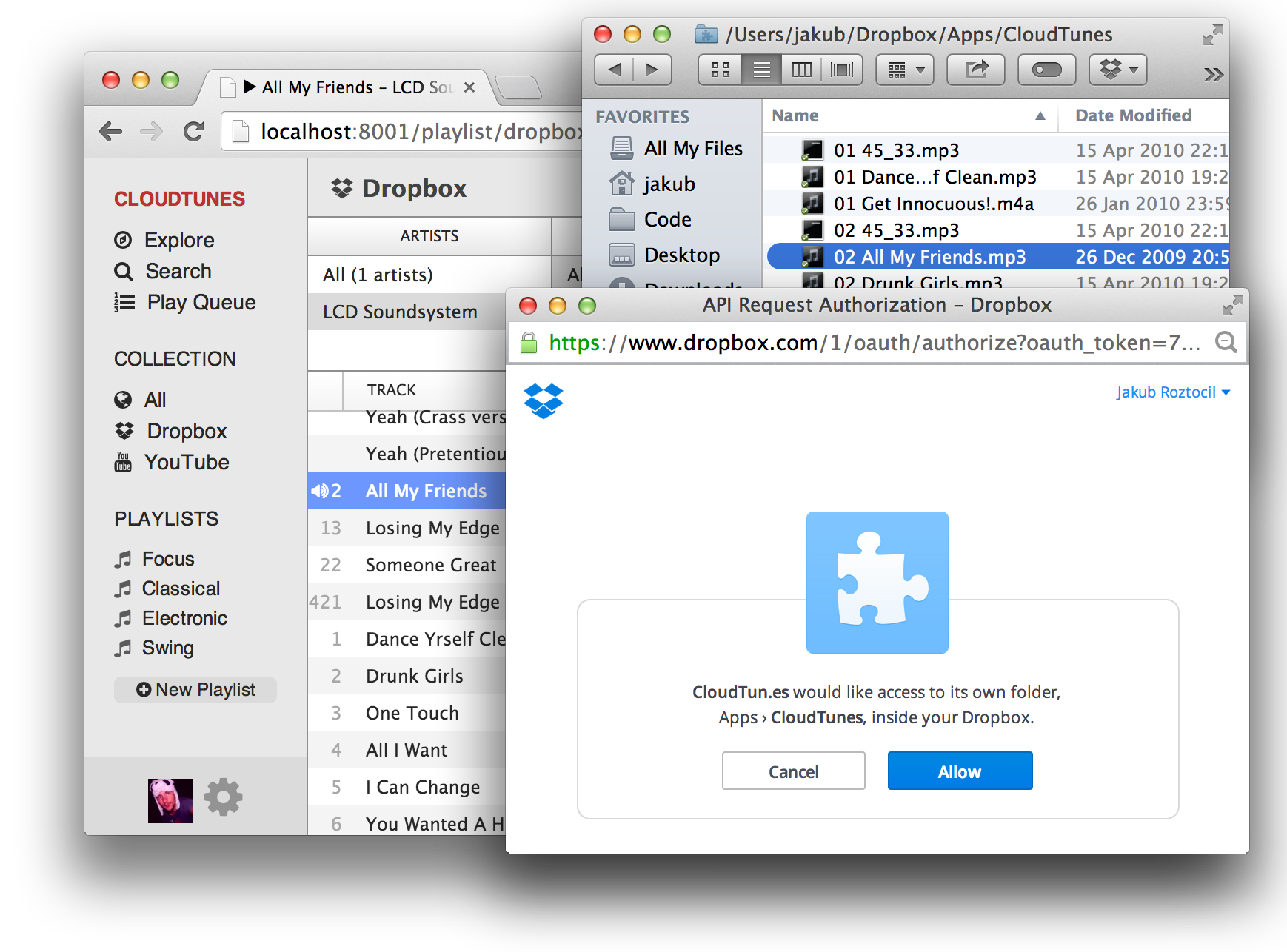 Organise your collection with playlists. Drag and drop tracks and albums on a playlist to add them. You can create playlists containing both tracks from your Dropbox and music videos from YouTube. 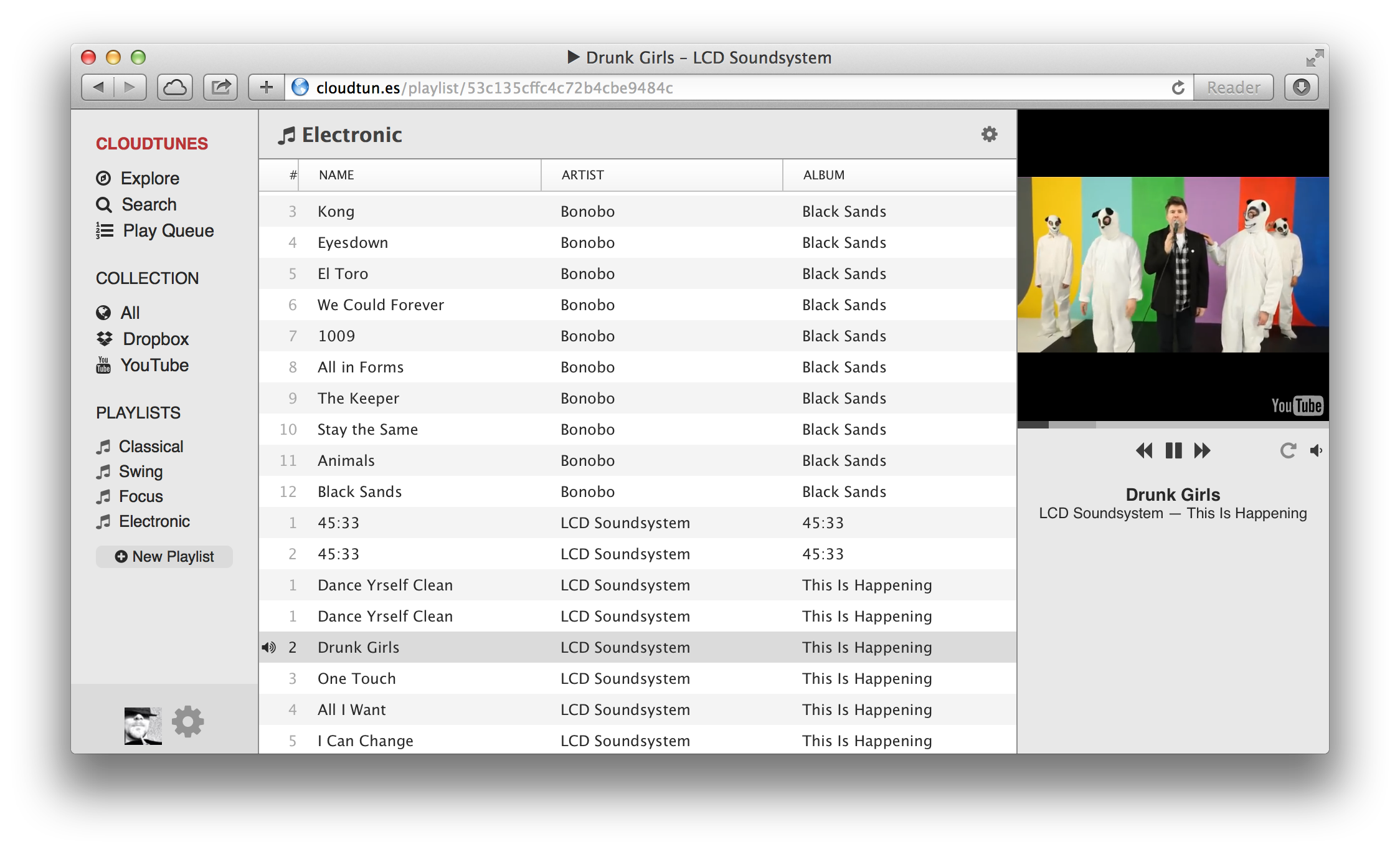 Scrobble and play your personalised recommendations. 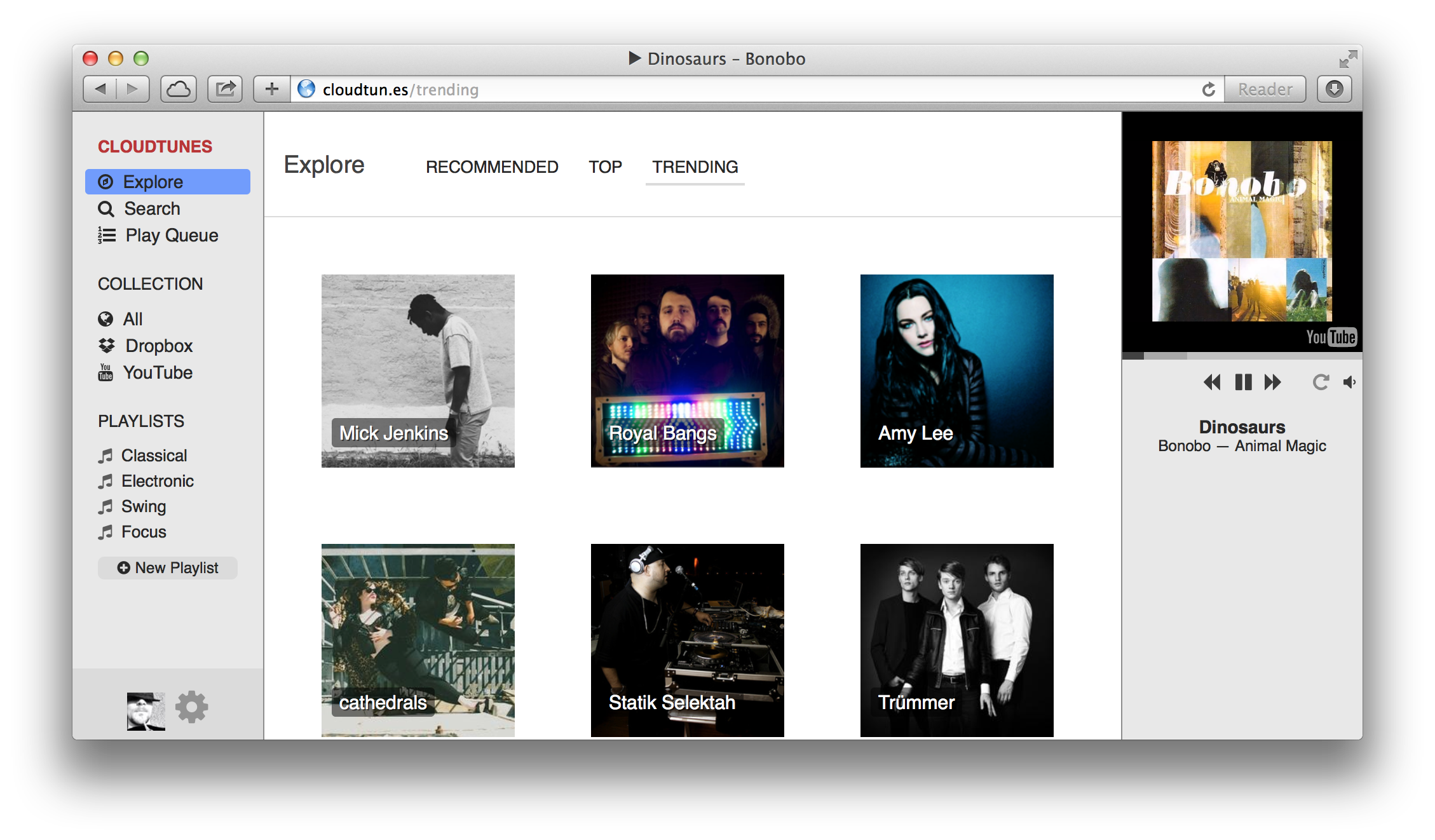 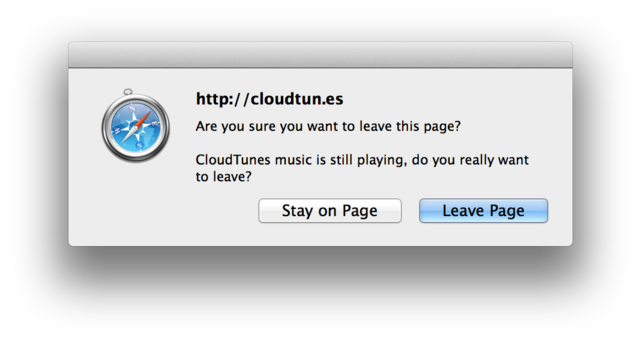 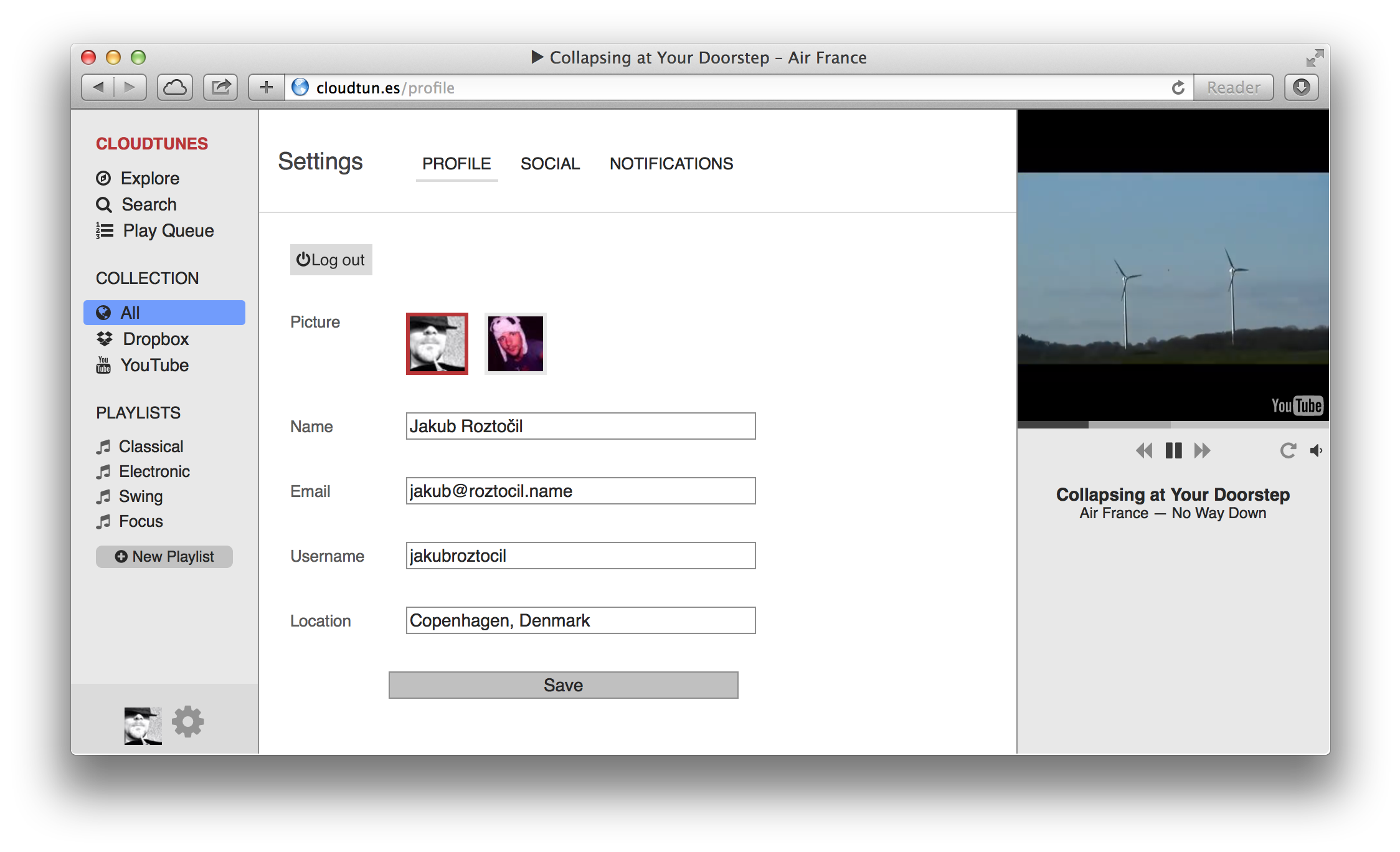 Continue by following the instructions in:

The easiest way to run CloudTunes is in an isolated Docker container. Like this, the only thing you need to install directly on your system is Docker (or boot2docker) itself.

Please follow the installation instructions on how to install Docker (or boot2docker) on your system. Then follow the steps bellow:

To start it again, run:

All user data (stored by MongoDB and Redis under /data) will persist until the container has been deleted.

After you have made any changes to the codebase or configuration and want them to be applied to the container, or if you simply wish to start from scratch again, run the following commands to delete the existing container (this will also delete all user data in it):

And then start again from step 1. above (it should go much faster this time).