autoperf simplifies the instrumentation of programs with performance counters on Intel machines. Rather than trying to learn how to measure every event and manually programming event values in counter registers or perf, you can use autoperf which will repeatedly run your program until it has measured every single performance event on your machine. autoperf tries to compute a schedule that maximizes the amount of events measured per run, and minimizes the total number of runs while avoiding multiplexing of events on counters. 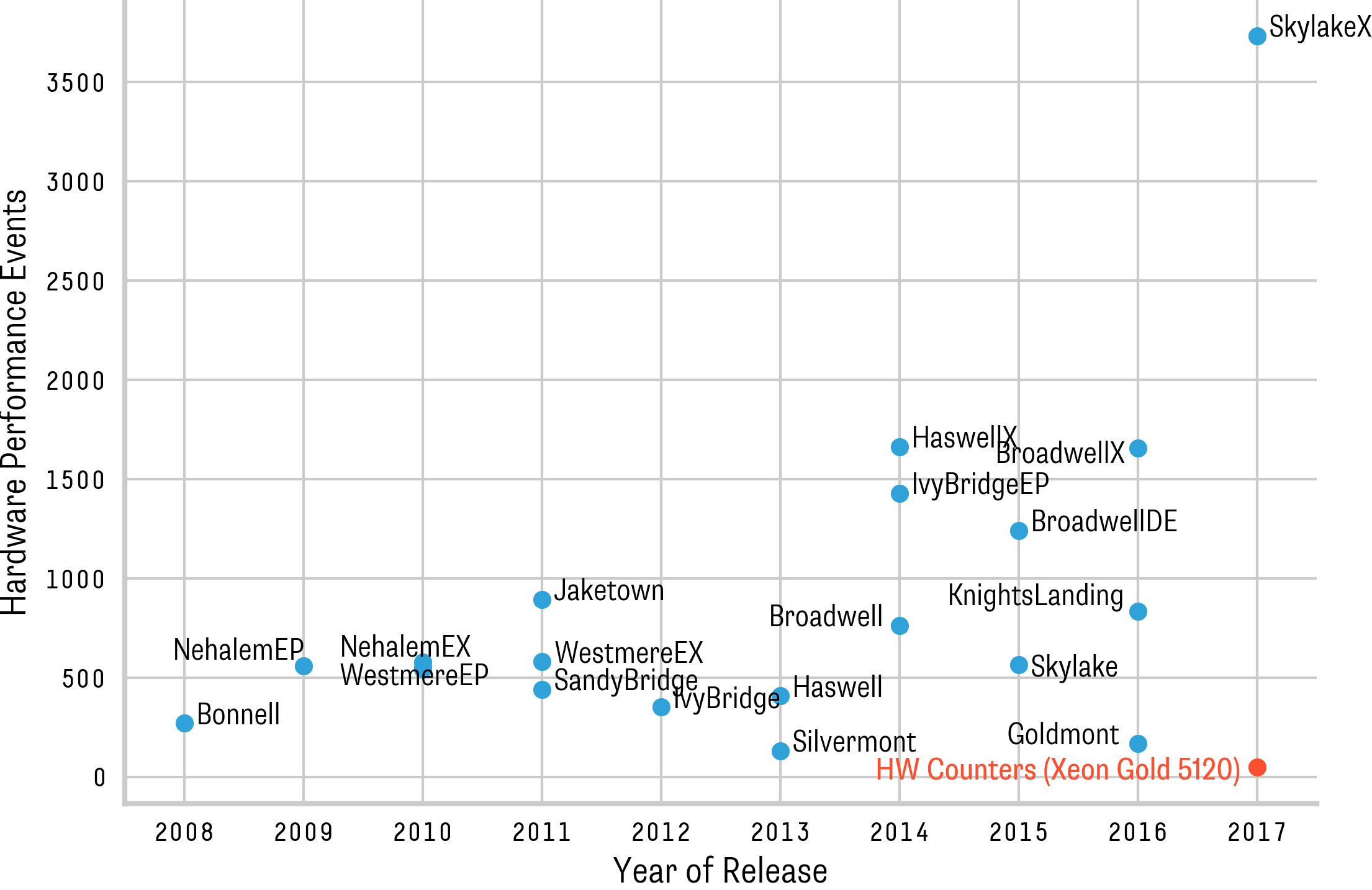 Performance monitoring units typically distinguish between performance events and counters. Events refer to observations on the micro-architectural level (e.g., a TLB miss, a page-walk etc.), whereas counters are hardware registers that count the occurrence of events. The figure on the right shows the number of different observable events for different Intel micro-architectures. Note that current systems provide a very large choice of possible events to monitor. The number of measurable counters per PMU is limited (typically from two to eight). For example, if the same events are measured on all PMUs on a SkylakeX (Xeon Gold 5120) machine, we can only observe a maximum of 48 different events (without sampling). autoperf simplifies the process of fully measuring and recording every performance event for a given program. In our screen session above, recorded on a SkylakeX machine with ~3500 distinct events, we can see how autoperf automatically runs a program 1357 times while measuring and recording a different set of events in every run.

autoperf is known to work with Ubuntu 18.04 on Skylake and IvyBridge/SandyBridge architectures. All Intel architectures should work, please file a bug request if it doesn't. autoperf builds on perf from the Linux project and a few other libraries that can be installed using:

You'll also need the nightly version of the rust compiler which is best installed using rustup:

autoperf is published on crates.io, so once you have rust and cargo installed, you can get it directly from there:

Or alternatively, clone and build the repository yourself:

autoperf uses perf internally to interface with Linux and the performance counter hardware. perf recommends that the following settings are disabled. Therefore, autoperf will check the values of those configurations and refuse to start if they are not set like below:

autoperf has a few commands, use --help to get a better overview of all the options.

The profile command instruments a single program by running it multiple times until every performance event is measured. For example,

will repeatedly run sleep 2 while measuring different performance events with performance counters every time. Once completed, you will find an out folder with many csv files that contain measurements from individual runs.

To combine all those runs into a single CSV result file you can use the aggregate command:

This will do some sanity checking and produce a results.csv (reduced example) file which contains all the measured data.

Performance events are measured individually on every core (and other monitoring units). The timeseries.py can aggregate events by taking the average, stddef, min, max etc. and producing a time-series matrix (see a reduced example).

Now you have all the data, so you can start asking some questions. As an example, the following script tells you how events were correlated when your program was running:

Event correlation for the autoperf profile sleep 2 command above looks like this (every dot represents the correlation of the timeseries between two measured performance events, this is from a Skylake machine with around 1700 non-zero event measurement): 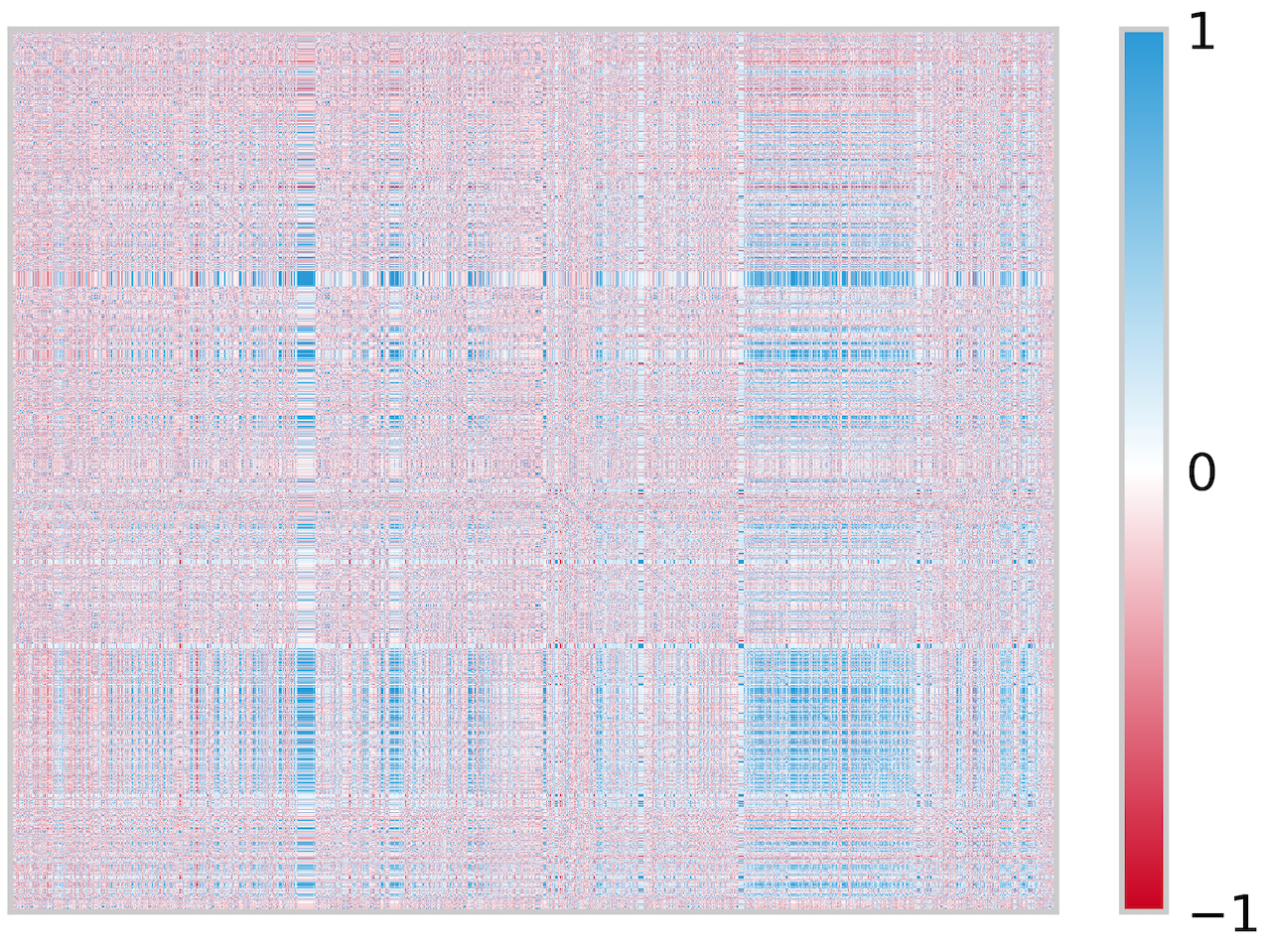 You can look at individual events too: 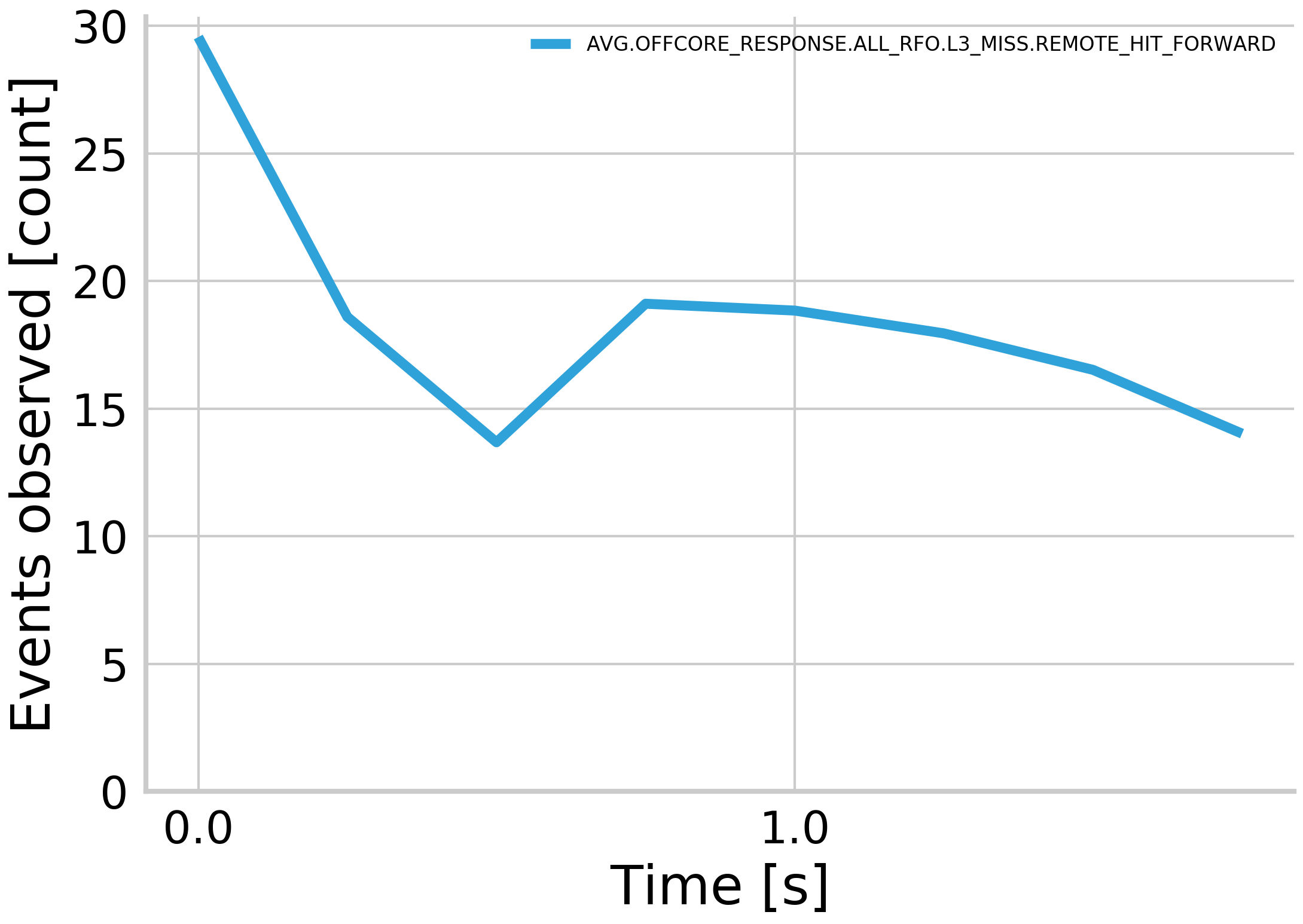 There are more scripts in the analyze folder to better work with the captured data-sets. Have a look.

What do I use this for?

autoperf allows you to quickly gather lots of performance (or training) data and reason about it quantitatively. For example, we initially developed autoperf to build ML classifiers that the Barrelfish scheduler could use for detecting application slowdown and make better scheduling decisions. autoperf can gather that data to generate such classifiers without requiring domain knowledge about events, aside from how to measure them.

You can read more about our experiments here:

Last but not least, autoperf can potentially be useful in many other scenarios: