An OpenGL 4.4 game made with Entity-Component-System design pattern.

This is a student project for the French engineering school IMAC. If you're a french-speaker, you might consider to have a look at the post-mortem (it has a lot of images) inside the doc folder.

The structure of this project is being improved in my next C++ game Roll Goal. The main changes are : improved state machine with the pushdown automaton structure, the replacement of most events by singleton components, a render queue for the renderrer and an more elaborate and maintenable structure for rendering (materials, layers, ...). You must install CMake and a C++ compiler which handles C++ 14. More on the compiler on the next sections.

The project need your graphic card driver to be up to date, as it is using OpenGL 4.4 core profile (released in 2013, so it should be fine).

The recommended compiler is g++, minimum version required is g++ 6.1, which is included by default on many linux distribution. You can update it with :

You will also need the OpenGl and SDL2 packages.

The recommended compiler is MSVC. To install it you will need Visual Studio (which is not VSCode) and select the C++ development package during installation. The MingW compiler will work as well if you prefer to use it.

The CMakeLists.txt file ensure that the project will work on Linux and Windows platforms.

You can build and launch the project in many different ways, we covered a few of them :

Go to this folder with a terminal, and enter those commands.

It means that you are genererating a Makefile, then using it to build the project, and finally running the binaries from the current working directory (needed to find assets).

From Visual Studio 2017, you don't need to generate a visual studio project with cmake. You can simply open visual studio, browse the toolbar to File->Open->Cmake... and select the CMakeLists.txt at the root of this directory. From this point, you have to make sure that you are using a x86 build configuration, and running the imac-tower-defense target. If everything is done, simply press f5 or click on the green arrow at the top.

If you add files, you will need to re-generate the cache for a successfull build. To do so, right click on CMakeLists.txt and use Generate Cache for imac-tower-defense 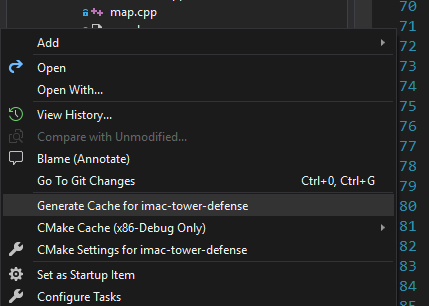 From this point, when you will open the repository folder with VSCode, it will prompt you to configure the projet. You must select a x86 kit, for exemple the Visual Studio Community 2017 - x86 kit. Once the configuration is done, you can compile the project by pressing f7. The .exe file will be outputed in build/Debug folder. You can launch it by pressing f5, but make sure to pick your operating system. 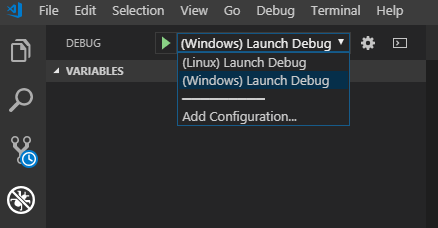 The project follows the Entity Component System design pattern. It has been made possible with the great ENTT library.

Our game is concieved as a state machine, and works like this architecture :