HFXBus is a bus implementation for NodeJS backed by Redis Streams and PubSub.

It's simple and effective to achieve high performance event-sourcing environment and microservice communication.

This project was rewritten in Typescript on v2, if you're running v1 and need reference please visit the branch v1. The v2+ still defined as RC and will only achieve GA when we finish the tests for HFXBus v2.

HFXBus uses Redis Streams to enqueue messages and groups to consume messages, but these streams only controls the flow of messages to make the processing lighweight in networking and memory/CPU aspects. All payload is stored as regular Redis keys and it's up to your endpoints decide which keys need to be loaded/created.

Redis PubSub is used to emit events happening to messages like when a message is consumed, so your endpoints have feedback about messages events.

And finally, with XTRIM you can keep your Redis server memory utilization low and with XCLAIM improve your (micro)services redundancy/resilience. We implemented the command XRETRY using Lua Scripting to achieve a reliable way to retry stalled out messages.

HFXBus provides client side partitioning through the method ConnectionManager.nodes(), but you need to be aware of the following points:

This feature was designed to work with the following architecture: 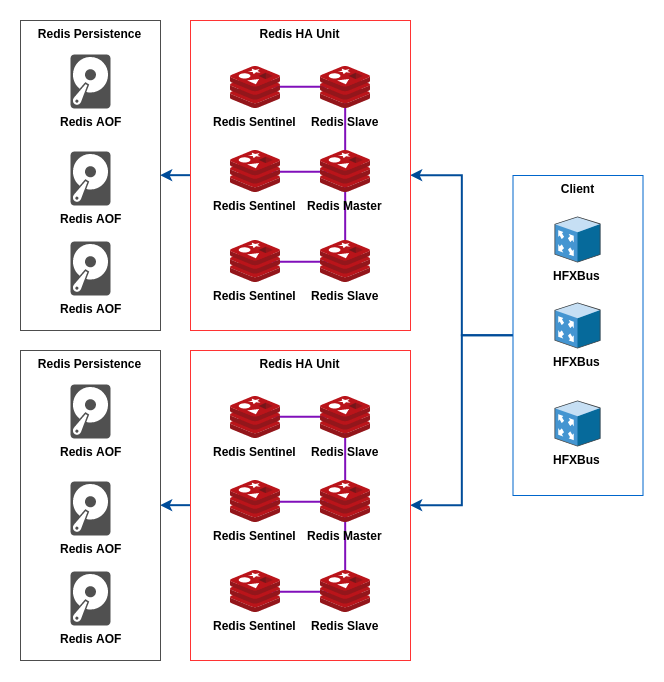 But there are tradeoffs with this method:

And another file as producer.ts:

Remember to start consumer.ts before producer.ts as by default consumer will receive only new jobs, you can change this behavior, take a look at the API Documentation.

Your can learn more about HFXBus API clicking here.