elixir_ale provides high level abstractions for interfacing to GPIOs, I2C buses and SPI peripherals on Linux platforms. Internally, it uses the Linux sysclass interface so that it does not require platform-dependent code.

NOTE: elixir_ale is actively maintained. However, future work is focused on elixir_ale 2.0 (aka Elixir Circuits). Elixir Circuits is more performant, has API naming and return value changes that we couldn't put here, and supports features like automatic I2C retries and GPIO pullups/pulldowns on some platforms. I2C, SPI and GPIO are split up in 3 repositories. See Elixir Circuits.

elixir_ale works great with LEDs, buttons, many kinds of sensors, and simple control of motors. In general, if a device requires high speed transactions or has hard real-time constraints in its interactions, this is not the right library. For those devices, it is recommended to look at other driver options, such as using a Linux kernel driver.

If you're natively compiling elixir_ale, everything should work like any other Elixir library. Normally, you would include elixir_ale as a dependency in your mix.exs like this:

If you just want to try it out, you can do the following:

If you're cross-compiling, you'll need to setup your environment so that the right C compiler is called. See the Makefile for the variables that will need to be overridden. At a minimum, you will need to set CROSSCOMPILE, ERL_CFLAGS, and ERL_EI_LIBDIR.

elixir_ale doesn't load device drivers, so you'll need to make sure that any necessary ones for accessing I2C or SPI are loaded beforehand. On the Raspberry Pi, the Adafruit Raspberry Pi I2C instructions may be helpful.

If you're trying to compile on a Raspberry Pi and you get errors indicated that Erlang headers are missing (ie.h), you may need to install erlang with apt-get install erlang-dev or build Erlang from source per instructions here.

elixir_ale only supports simple uses of the GPIO, I2C, and SPI interfaces in Linux, but you can still do quite a bit. The following examples were tested on a Raspberry Pi that was connected to an Erlang Embedded Demo Board. There's nothing special about either the demo board or the Raspberry Pi, so these should work similarly on other embedded Linux platforms.

A General Purpose Input/Output (GPIO) is just a wire that you can use as an input or an output. It can only be one of two values, 0 or 1. A 1 corresponds to a logic high voltage like 3.3 V and a 0 corresponds to 0 V. The actual voltage depends on the hardware.

Here's an example of turning an LED on or off: 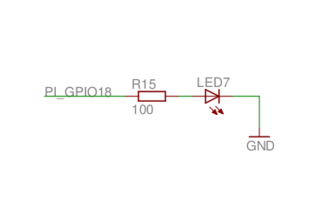 To turn on the LED that's connected to the net (or wire) labeled GPIO18, run the following:

Input works similarly. Here's an example of a button with a pull down resistor connected.

If you're not familiar with pull up or pull down resistors, they're resistors whose purpose is to drive a wire high or low when the button isn't pressed. In this case, it drives the wire low. Many processors have ways of configuring internal resistors to accomplish the same effect without needing to add an external resistor. It's platform-dependent and not shown here.

If you'd like to get a message when the button is pressed or released, call the set_int function. You can trigger on the :rising edge, :falling edge or :both.

A Serial Peripheral Interface (SPI) bus is a common multi-wire bus used to connect components on a circuit board. A clock line drives the timing of sending bits between components. Bits on the Master Out Slave In MOSI line go from the master (usually the processor running Linux) to the slave, and bits on the Master In Slave Out MISO line go the other direction. Bits transfer both directions simultaneously. However, much of the time, the protocol used across the SPI bus has a request followed by a response and in these cases, bits going the "wrong" direction are ignored. This will become more clear in the example below.

The following shows an example Analog to Digital Converter (ADC) that reads from either a temperature sensor on CH0 (channel 0) or a potentiometer on CH1 (channel 1). It converts the analog measurements to digital, and sends the digital measurements to SPI pins on the main processor running Linux (e.g. Raspberry Pi). Many processors, like the one on the Raspberry Pi, can't read analog signals directly, so they need an ADC to convert the signal.

The protocol for talking to the ADC in the example below is described in the MCP3002 data sheet. The protocol is very similar to an application program interface (API) for software. It will tell you the position and function of the bits you will send to the ADC, along with how the data (in the form of bits) will be returned.

See Figure 6-1 in the data sheet for the communication protocol. Sending a 0x68 first reads the temperature and sending a 0x78 reads the potentiometer. Since the data sheet shows bits, 0x68 corresponds to 01101000b. The leftmost bit is the "Start" bit. The second bit is SGL/DIFF, the third bit is ODD/SIGN, and the fourth bit is MSBF. From table 5-1, if SGL/DIFF==1, ODD/SIGN==0, and MSBF==1 then that specifies channel 0 which is connected to the thermometer.

As shown above, you'll find out that Elixir's binary pattern matching is extremely convenient when working with hardware. More information can be found in the Kernel.SpecialForms documentation and by running h <<>> at the IEx prompt.

An Inter-Integrated Circuit (I2C) bus is similar to a SPI bus in function, but uses fewer wires. It supports addressing hardware components and bidirectional use of the data line.

The following shows a bus IO expander connected via I2C to the processor. 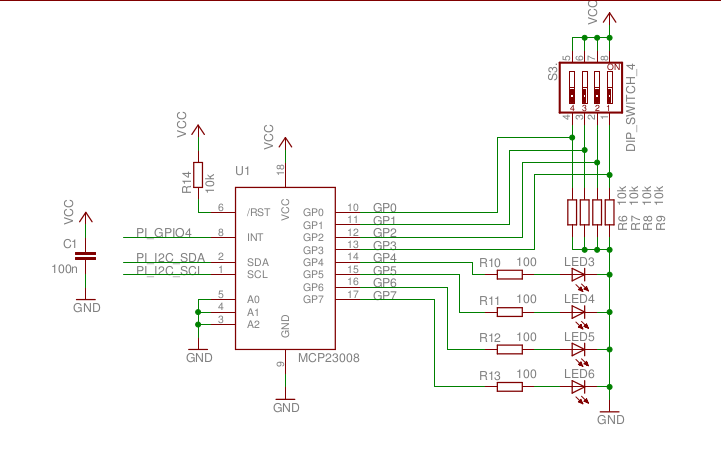 The protocol for talking to the IO expander is described in the MCP23008 Datasheet. Here's a simple example of using it.

Where can I get help?

Most issues people have are on how to communicate with hardware for the first time. Since elixir_ale is a thin wrapper on the Linux sys class interface, you may find help by searching for similar issues when using Python or C.

For help specifically with elixir_ale, you may also find help on the nerves channel on the elixir-lang Slack. Many Nerves users also use elixir_ale.

Why isn't elixir_ale a NIF?

While elixir_ale should never crash, it's hard to guarantee that weird conditions on the I2C or SPI buses wouldn't hang the Erlang VM. elixir_ale errors on the side of safety of the VM.

I tried turning on and off a GPIO as fast as I could. Why was it slow?

Please don't do that - there are so many better ways of accomplishing whatever you're trying to do:

On the hardware that I normally use, PWM has been implemented in a platform-dependent way. For ease of maintenance, elixir_ale doesn't have any platform-dependent code, so supporting it would be difficult. An Elixir PWM library would be very interesting, though, should anyone want to implement it.

There is a library available that supports the 1-wire protocol, see onewire_therm.

Can I develop code that uses elixir_ale on my laptop?

You'll need to fake out the hardware. Code to do this depends on what your hardware actually does, but here's one example:

How do I debug?

The most common issue is communicating with an I2C or SPI device for the first time. For I2C, first check that an I2C bus is available:

If the list is empty, then I2C is either not available, not enabled, or not configured in the kernel. If you're using Raspbian, run raspi-config and check that I2C is enabled in the advanced options. If you're on a BeagleBone, try running config-pin and see the Universal I/O project to enable the I2C pins. On other ARM boards, double check that I2C is enabled in the kernel and that the device tree configures it.

Once an I2C bus is available, try detecting devices on it:

The return value here is a list of device addresses that were detected. It is still possible that the device will work even if it does not detect, but you probably want to check wires at this point. If you have a logic analyzer, use it to verify that I2C transactions are being initiated on the bus.

Options for debugging a SPI issue are more limited. First check that the SPI bus is available:

If nothing is returned, verify that SPI is enabled and configured on your system. The steps are identical to the I2C ones above except looking for SPI.

If you're having trouble with GPIOs, the files controlling them are in /sys/class/gpio. ElixirALE is a thin wrapper on the files so if something can be accomplished there, it usually can be accomplished in ElixirALE. One big omission from the directory is support for internal pull-ups and pull-downs. These are very convenient for buttons so that external resisters aren't needed. Unfortunately, the way to handle pull-ups and pull-downs is device specific. If you're on a Raspberry Pi, see gpio_rpi.

Will it run on Arduino?

No. Elixir ALE only runs on Linux-based boards. If you're interested in controlling an Arduino from a computer that can run Elixir, check out nerves_uart for communicating via the Arduino's serial connection or firmata for communication using the Arduino's Firmata protocol.

Can I help maintain elixir_ale?

Yes! If your life has been improved by elixir_ale and you want to give back, it would be great to have new energy put into this project. Please email me.

This library draws much of its design and code from the Erlang/ALE project which is licensed under the Apache License, Version 2.0. As such, it is licensed similarly.