Dolmades are intended as a mean to ease packaging, installation, usage and distribution of Windows applications in Linux environments to the utmost extent. A dolma is a containerized Windows app which runs on Linux without external dependencies.

The focus of the v1.x release cycle will be put on support for latest vanilla wine stable and staging, the standardization of the recipe specification used to create dolmades, proper ingredients handling, the protoypical implementation of the basic concepts and the completion of major unresolved issues.

The current prototypical implementation is done in form of the following Python scripts:

Once the prototype is feature-complete I want to work on an enhanced version based on Qt and a remote repository service where user can store their dolmades, ingredients and recipes.

Dolmades make use of the following underlying technologies:

Dolmades makes use of several concepts which will be briefly explained here:

or simply clone it using git:

Cooking describes the process of building a dolma from a recipe given its required ingredients. To cook a dolma use the very simple example:

This will install the winning demo of Assembly 2007 by Andromeda Software Development. At first the required ingredients will be downloaded and verified by its checksum. Next, the dolmade is created and the installation as defined in the recipe is being performed. Finally, you can run the installed dolmade: 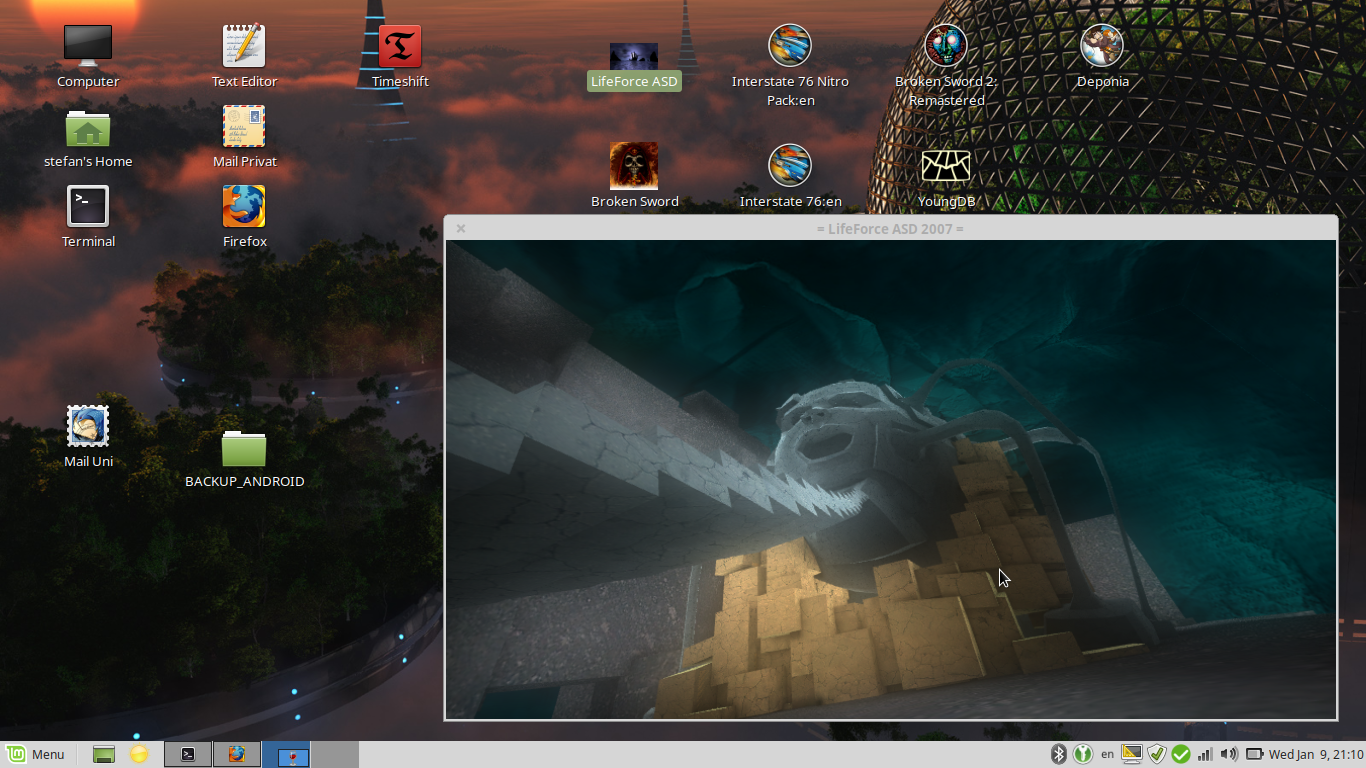 The dolma can now be uninstalled again:

Now a second example: the free (as in beer) adventure game "Broken Sword":

This will create the dolma and add menu entries and a desktop symbol. 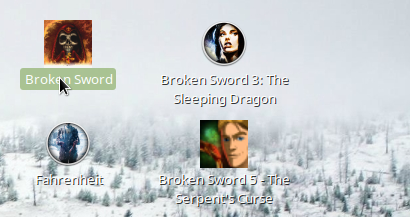 A launcher will appear and offer you multiple choices created by the installer. Select Windowed Mode and click "Ok":

The game will be started. You should be hearing sound unless wine detects the wrong alsa device which still may happen on some hardware. 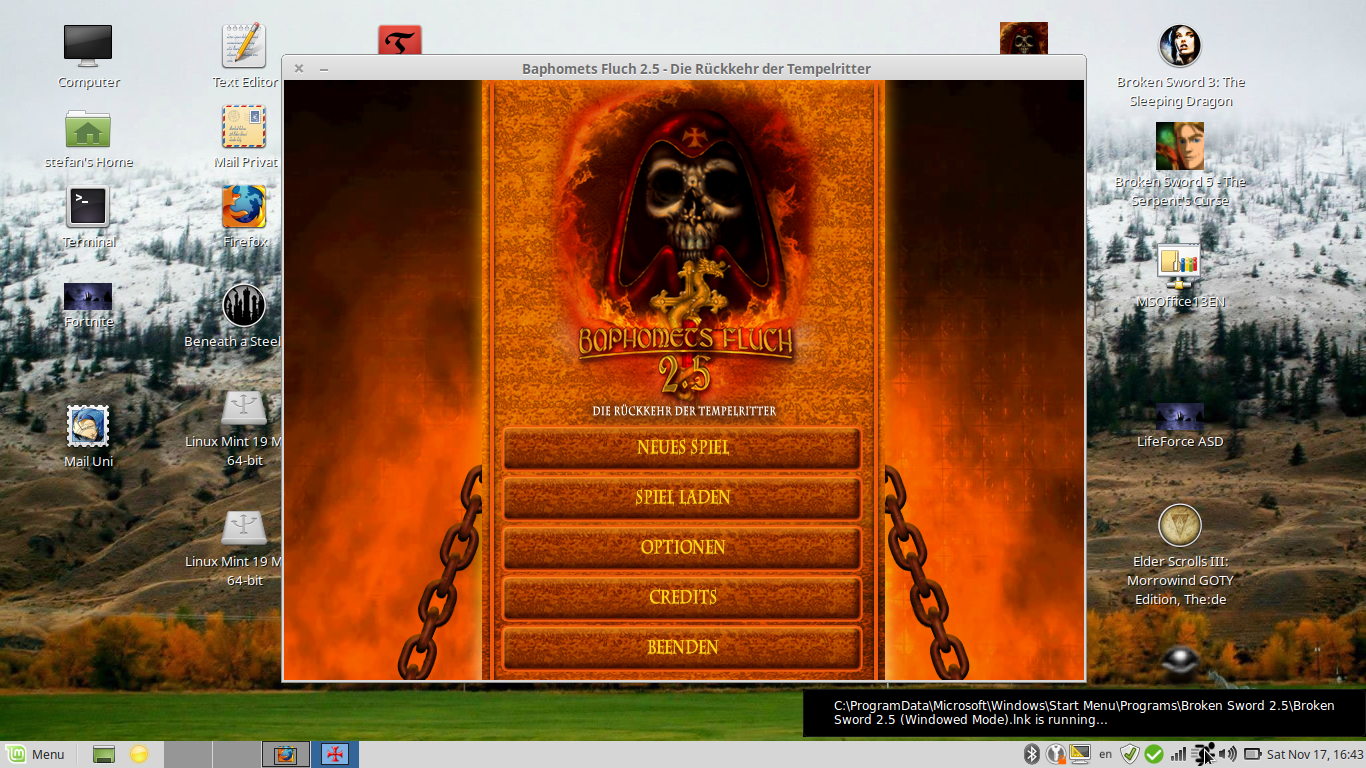 More recipes for dolmades can be downloaded here

For this to work you'll need to be registered at GOG. They offer some items for free so you can actually test goglizer without purchasing a game. If you have not done so already obtain the free item "Flight of the Amazon Queen" and verify that it is shown in your personal game collection. Retrieve a list of your games using the script goglizer:

The -u parameter tells goglizer to retrieve the dolmades runtime container and your personal game list. At first, you will be asked to authorize using your GOG account. Since two-factor-authentication is mandatory you will need to check your email and enter the code that GOG has sent to you. This needs to be done only once since the authorization credentials are being stored in your home directory for subsequent use. Finally, a list of your games is displayed:

Note, that only games are listed that have no linux installer. If you want linux games to be listed as well you need to use the -l parameter:

Now choose a game of your liking and instruct goglizer to download the ingredients and create a corresponding recipe template using the -d parameter:

Now the dolma can be installed:

After successful completion you will find a clickable icon on your desktop and a menu entry :) You can skip the goglizer run completely by using the recipe under recipes/flight_of_the_amazon_queen:en:1.1.dolma.

As of now for one out of two games the installation procedure fails or the installed game won't work properly. If that happens dolmades makes it easy to find and apply fixes to the generated recipe. Let's give an real example:

We try to cook it:

The java installation will fail and leave a broken dolma. First, we need to figure out interactively what needs to be done:

The previous changes are now applied permanently to the dolma but will get lost if it will be recooked. That is why we ought to update the corresponing recipe to include that fix. Edit edna_harvey_the_breakout:en.dolma and add the following section right before the RunUser command which launches the installer using wine:

Finally, the dolma can be cooked once more:

This erases the previous dolma and helps keeping recipe and cooked dolma in sync with each other.

Once a dolma has been cooked and thoroughly tested it is possible to convert it into a standalone installer:

This will package all dependencies and create an offline installer script based on makeself which installs on various Linux systems without special privileges. The approximate size overhead produced by the Ubuntu Base Image and the wineprefix will be 800Mb.

Users who download this file should open a terminal at the location of the downloaded file and run the installer like this:

After accepting the license the dolma will be installed under $HOME/Dolmades-v1.1/LifeForce_ASD. It can then be launched or removed again from the created menu entry or the desktop symbol.

Note: as of now self-installable dolmades will require Python 2.7 and curl on the host system. A future release will probably get rid of this requirement.

Your dolmades are managed by dolmades

Removes the given dolma (data, menu entries and desktop symbols) and frees up the allocated space:

You can pass multiple dolma names or sha256 container ids.

Executes the /.dolmades/start.sh script which either runs the executable defined via SetTarget in the dolmafile or the target selector script which lets you choose between all installed targets.

It is possible to launch a bash inside the container. The installation directory will be available under /install and installed windows applications under /wineprefix. Furthermore, the home directory of the calling user is available:

In rare cases you might want to run as fake root, e.g. to install a missing package:

It is possible to make files or directories of the host file system accessible from within the container by defining so-called binds. These will apply just when a dolma is being launched but not when it is being debugged. Usually it is sufficient to use the predefined default binds in the recipe.

A bind is defined using absolute path names as follows: /dolmadedir/dolmadefile:/hostdir/hostfile or /dolmadedir/:/hostdir/ Use this way to set binds just for tests as they are temporary and will not persist when a dolma is being exported and imported subsequently. Generally define the binds in your recipe where they will persist over imports/exports.

It is possible to export and import a readily installed dolmade.

The final goal is to be able to export the dolma on some linux system running under some hardware and import it on another linux system running another hardware. Since the user name will likely change all users home directories are shared and being symlinked to root. Also, things can stop working if the hardware changes, e.g. sound stops working, but can be fixed easily by running winecfg in debug mode.

This will create a clickable icon on the desktop and a sub-menu entry which will launch the corresponding dolmade. In addition a menu entry for uninstallation is created. It is possible to remove the menu entries and the desktop symbol again without uninstalling the dolmade:

You should hardly need this command but better safe than sorry!

dolmades pulls its base images from DockerHub. The Dockerfiles specifying the build and the build script are to be found in the docker subdirectory.

As of dolmades 1.2 all immages are for 64-bit linux only. If you need a 32-bit image you can modify the Dockerfiles and easily build them yourself. These images for releases will be tagged accordingly and not being rebuilt in future. This is what all images have in common:

The following environment variables are available in a dolma (these are example values):

It is possible to create custom docker images on DockerHub as base for recipes which e.g. offer legacy wine, pba or Proton support.

All available tools give help output:

Dolmades ships with preconfigured settings in config.py. These are the most important ones:

A recipe is a specification which allows the guided build of the respective dolmade. Dolmafiles are for dolmades what Dockerfiles are for Docker except that dolmades are not necessarily built fully automated and hence require interaction if a graphical installer is being used.

The structure of a Dolmafile is:

This command is mandatory. It defines the name of the dolma used internally by dolmades. Whitespaces are not allowed. This name is going to be slightly converted and used in the desktop icon title.

This command is optional. It defines the tag of the base image pulled by the recipe, and has to match with the version reported by cook. Advised to be omitted in development, such that no version checking takes place, and the latest base image is being used.

This command is mandatory. It defines the DockerHub repository to be used. The tag of the image used is defined by VERSION.

This command is optional. This description is stored inside the container and it is not being used yet.

This command is repeatable and optional. For each ingredient used within the recipe one entry is needed. The ingredient will be fetched from one of the locations defined and made available inside the container under filename.

This command is repeatable and optional. This command will be launched as the calling user in a bash environment inside the dolmade. config.py:INST_PATH will be the target directory. You can cascade multiple commands by && and they will be executed subsequently. The first failing command, however, will terminate the execution. If all commands succeed a final wineserver --wait ensures the proper termination of all wine processes.

This command is repeatable and optional. This command will be launched as fake root in a bash environment inside the dolmade. config.py:INST_PATH will be the target directory. You can cascade multiple commands by && and they will be executed subsequently. The first failing command however will termine the execution. Usually RUNUSER should suffice but if you need to install some packages using apt RUNROOT will be required.

This command is optional. If omitted the dolma will launch using the target launcher and allow the user to select one of all installed targets i.e. lnk-files created during the installation. Sometimes it is desirable to launch a specific executable and then this option can be used to set the exe-binary.

This command is optional. Sometimes if TARGET is used it is neccessary to also specify arguments. This can be done using this command.

This command is optional. Sometimes it is necessary to set some environment variables for an executable. For instance it is possible to force DLL overrides or specific language settings.

This command is optional. Sometimes it is necessary to call wine using a preceding command e.g. taskset -c 0 wine in order to limit the execution to a single CPU. This can help fix race conditions.

This command is optional. It specifies the icon file to be used for the desktop symbol and the target launcher with absolute path and file name. If an absolute path is ommitted the /install and /wineprefix/drive_c directories will be browsed and the first occurrence of the given icon file name will be used. If the command is omitted or the given file name cannot be found it defaults to the dolma icon.

This command is optional. It is possible to make certain locations or devices of the host system available by keywords predefined in bind.py. These binds are kept as setting and will be preserved when a container is being boxed, exported and imported again. Currently predefined binds are:

Dolmades currently are a prototypical implementation done in python. Once feature-complete I want to work on an enhanced version based on Qt combining a remote repository service. The primary goal will be to create a powerful GUI to setup, maintain and run Windows software under Linux.

I figure some exciting use cases which would become addressable as well, e.g.

Last but not least: if you are in trouble, check out the issues and open a new one if applicable.