AutoMuteUs is a Discord Bot to harness Among Us game data, and automatically mute/unmute players during games!

Have any questions, concerns, bug reports, or just want to chat? Join our discord at https://discord.gg/ZkqZSWF!

Click the "invite me" badge in the header to invite the bot to your server, or click the GIF on the left.

All artwork for the bot has been generously provided by Smiles! 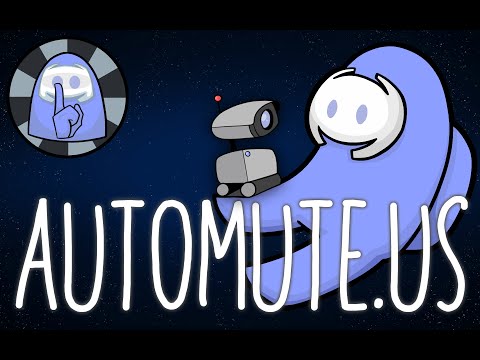 To start a bot game in the current channel, type the following .au command in Discord after inviting the bot:

The bot will send you a private message (make sure your Discord settings allow DMs from server members!) with a link that is used to sync the capture software to your game. It will also have a link to download the latest version of the capture software, if you don't have it already.

If you want to view command usage or see the available options, type .au or .au help in your Discord channel.

The Discord Bot uses the .au prefix for any commands by default; if you change your prefix remember to replace .au with your custom prefix. If you forget your prefix, you can @mention the bot and it will respond with whatever it's prefix currently is.

In addition to handful of more secretive Easter Egg commands...

You can view privacy and data collection details for the Official Bot here.

If you would prefer to self-host the bot, the steps for doing so are provided below. Self-hosting requires robust knowledge and troubleshooting capability for Docker/Docker-compose, unRAID, Heroku, and/or any other networking and routing config specific to your hosting solution.

As such, we recommend that the majority of users take advantage of our Verified bot. The link to invite our bot can be found here:

If you are certain that you would prefer to self-host the bot, please follow any of the guides detailed below.

Now follow any of the specific hosting options provided below:

Docker compose is the simplest and recommended method for self-hosting AutoMuteUs, but it does require an existing physical machine or VPS to run on.

There is a docker-compose.yml file in this repository that will provide all the constituent components to run AutoMuteUs.

unRAID hosting steps are are not yet updated for v3.0+ of AutoMuteUs, and as such is not supported at this time.

Heroku hosting steps are are not yet updated for v3.0+ of AutoMuteUs, and as such is not supported at this time.

AutoMuteUs exists in the FreeBSD Ports tree as games/automuteus. Instructions are included in the Port.

If, for whatever reason, you really want to self host, but also don't want to figure out Docker or use Windows and hate Docker because of it (I don't blame you) you can self host 2.4.3 instead. If you are using this method, continue using the newest capture!

The easiest way to test changes is to use docker-compose, but instead of using a pre-built image, building the automuteus docker image from source. Thankfully, this is easy to do:

Just remember that you will need to do a rebuild of the docker images every time you make a change.

Galactus is a program used to speed up muting and deafening (which is typically constrained by Discord rate-limits). It allows for an arbitrary number of tokens to be provided for faster muting/deafening, but also supports capture-side bots. A guide to setup your own capture-side bot can be found here, and the repo for Galactus is here.