Written in C/C++, Datoviz has been designed from the ground up for performance. It provides native Python bindings (based on Cython). Bindings to other languages could be developed thanks to community efforts (Julia, R, MATLAB, Rust, C#, and so on). Datoviz uses the Vulkan graphics API created by the Khronos consortium, successor of OpenGL. Supporting other modern graphics API, such as WebGPU, would constitute interesting developments.

Datoviz is currently being developed mostly by Cyrille Rossant at the International Brain Laboratory, a consortium of neuroscience research labs around the world.

!!! note Datoviz is at an early stage of development and the API is not yet stabilized. Use at your own risks, but feel free to share your feedback, suggestions, use-cases, feature requests on GitHub. 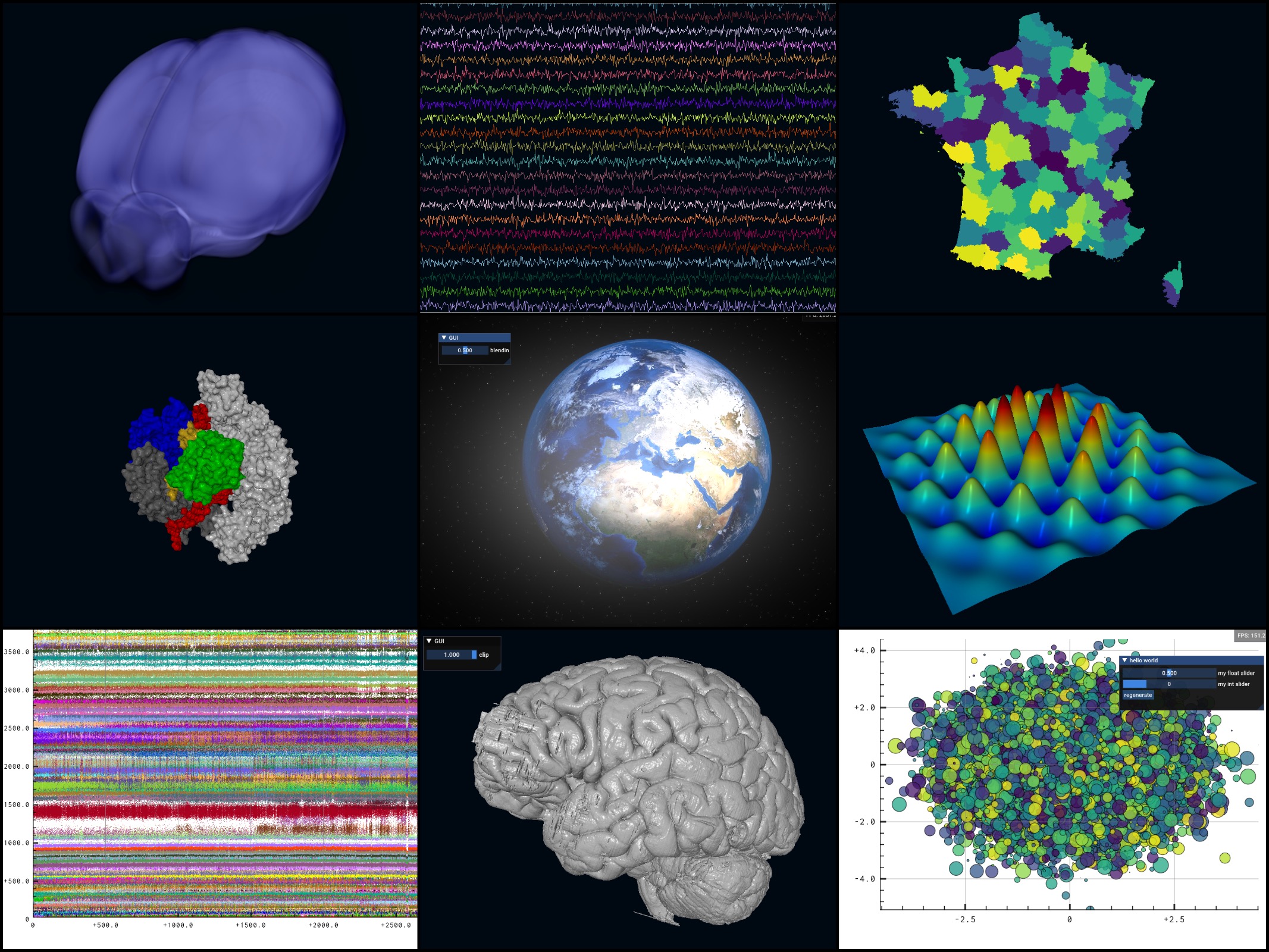 The documentation is divided into:

Datoviz borrows heavily ideas and code from other projects.

VisPy is a Python scientific visualization library created in 2013 by Luke Campagnola (developer of pyqtgraph), Almar Klein (developer of visvis), Nicolas Rougier (developer of glumpy), and myself (Cyrille Rossant, developer of galry). We joined forces to create a single library unifying all of our approaches. There is today a community of users and projects based on VisPy (napari). David Hoese and some of the original VisPy developers are currently maintaining the library. The current version of VisPy suffers from the limitations of OpenGL, a 30-year-old technology.

In 2020, VisPy received a 1-year funding from the Chan Zuckerberg Initiative (CZI) to improve the documentation and knowledge base.

In 2021, VisPy received another CZI grant for building VisPy 2.0, a completely redesigned library leveraging newer GPU technology such as Vulkan and WebGPU. The current strategy is to rebuild VisPy on top of Datoviz, pygfx (a WebGPU-based library developed by Almar Klein), and other backends.

Glumpy, developed by Nicolas Rougier, provides efficient implementations of high-quality 2D visuals on the GPU, using algorithms from the antigrain geometry library. The GPU code of most 2D visuals in Datoviz comes directly from Glumpy.

Datoviz is being developed by Cyrille Rossant at the International Brain Laboratory, with funding from the Simons Foundation, the Flatiron Institute, the Wellcome Trust, INCF. The logo was graciously created by Chiara Zini.