Crawling the web can be easy or hard, depending upon the details. Mature crawlers like Nutch and Heritrix work great in many situations, and fall short in others. Some of the most demanding crawl situations include open-ended crawling of the whole web.

The object of this project is to create a modular crawler with pluggable modules, capable of working well for a large variety of crawl tasks. The core of the crawler is written in Python 3.7+ using coroutines.

CoCrawler is pre-release, with major restructuring going on. It is currently able to crawl at around 170 megabits / 170 pages/sec on a 4 core machine. 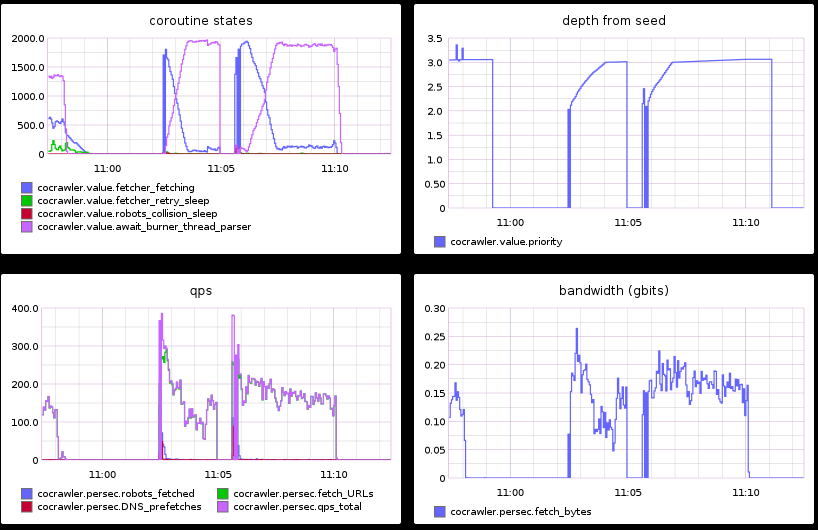 We recommend that you use pyenv / virtualenv to separate the python executables and packages used by cocrawler from everything else.

For a more fresh version, clone the repo and install like this:

The CI for this repo uses the latest versions of everything. To see exactly what worked last, click on the "Build Status" link above. Alternately, you can look at requirements.txt for a test combination that I probably ran before checking in.

CoCrawler draws on ideas from the Python 3.4 code in "500 Lines or Less", which can be found at https://awesomeopensource.com/project/aosabook/500lines. It is also heavily influenced by the experiences that Greg acquired while working at blekko and the Internet Archive.

Alternatives To CocrawlerSelect To Compare
Autoscraper ⭐ 4,803
A Smart, Automatic, Fast and Lightweight Web Scraper for Python
dependent packages 1total releases 16most recent commit a month ago