WinSpd enables the creation of storage units ("SCSI disks") in user mode (i.e. without writing any kernel mode code). Such storage units are created and served by user mode storage devices (i.e. user mode processes) and are added to the Windows OS storage stack. They appear to Windows as real disks that can be formatted and accessed via a file system such as NTFS.

A user mode storage device is a user mode process that can create and serve storage units. As storage unit is a SCSI "direct-access block device" (as per the definition in the SCSI SBC standard) or more commonly referred to as a "SCSI disk". It is used to store data in logical blocks; each block contains the same amount of data (the Block Length) and has a Logical Block Address (LBA), which is a 64-bit number in a single contiguous address space. In particular WinSpd (and the SCSI standard) do not assume the traditional geometry of cylinder-head-sector (CHS) for how blocks are laid out.

For a full tutorial on creating a user mode storage device see the Tutorial.

WinSpd consists of a number of software components with different responsibilities: 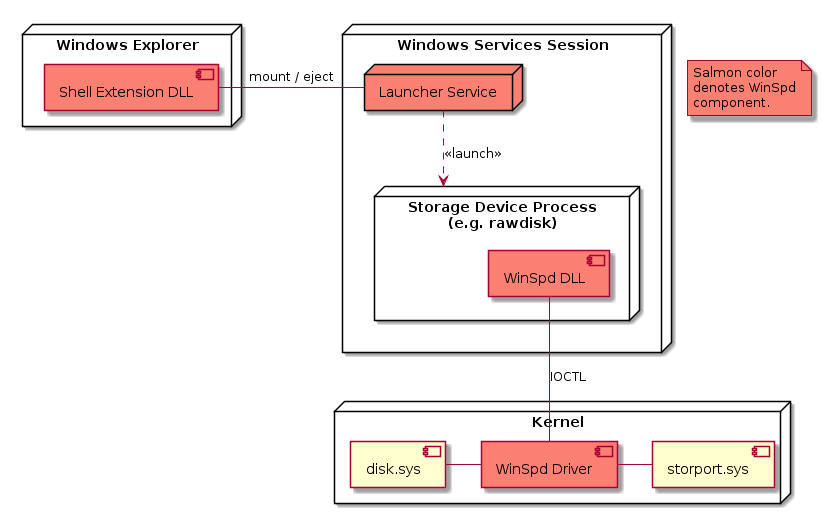 The project source code is organized as follows:

WinSpd is available under the GPLv3 license with a special exception for Free/Libre and Open Source Software. A commercial license is also available. Please contact Bill Zissimopoulos <billziss at navimatics.com> for more details.