SQLsmith is a random SQL query generator. Its paragon is Csmith, which proved valuable for quality assurance in C compilers.

It currently supports generating queries for PostgreSQL, SQLite 3 and MonetDB. To add support for another RDBMS, you need to implement two classes providing schema information about and connectivity to the device under test.

Besides developers of the RDBMS products, users developing extensions might also be interested in exposing their code to SQLsmith’s random workload.

Since 2015, it found 118 bugs in alphas, betas and releases in the aforementioned products, including security vulnerabilities in released versions. Addtional bugs were squashed in extensions and libraries such as orafce and glibc.

In order to build on Mac OSX, assuming you use Homebrew, run the following

SQLsmith connects to the target database to retrieve the schema for query generation and to send the generated queries to. Currently, all generated statements are rolled back. Beware that SQLsmith does call functions that could possibly have side-effects (e.g. pg_terminate_backend). Use a suitably underprivileged user for its connection to avoid this.

The following options are currently supported:

--verbose makes sqlsmith emit some progress indication to stderr. A symbol is output for each query sent to the server. Currently the following ones are generated:

When you test against a RDBMS that doesn’t support some of SQLsmith’s grammar, there will be a burst of syntax errors on startup. These should disappear after some time as SQLsmith blacklists productions that consistently lead to errors.

--verbose will also periodically emit error reports. In the following example, these are mostly caused by the primitive type system.

The only one that looks interesting here is the cache lookup one. Taking a closer look at it reveals that it happens when you query a certain catalog view like this:

This is because the planner then puts pg_get_indexdef(oid) in a context where it sees non-index-oids, which causes it to croak:

Now this is more of a curiosity than a bug, but still illustrating how debugging with the help of SQLsmith might look like.

--log-to allows logging of hundreds of sqlsmith instances into a central PostgreSQL database. ./log.sql contains the schema sqlsmith expects and some additional views to generate reports on the logged contents.

It also contains a trigger to filter boring/known errors based on the contents of the tables known and known_re. I periodically COPY my filter tables for testing PostgreSQL into the files ./known_re.txt and ./known.txt to serve as a starting point.

SQLsmith is available under GPLv3. Use it at your own risk. It may damage your database (one of the purposes of this tool is to try and break things). See the file COPYING for details. 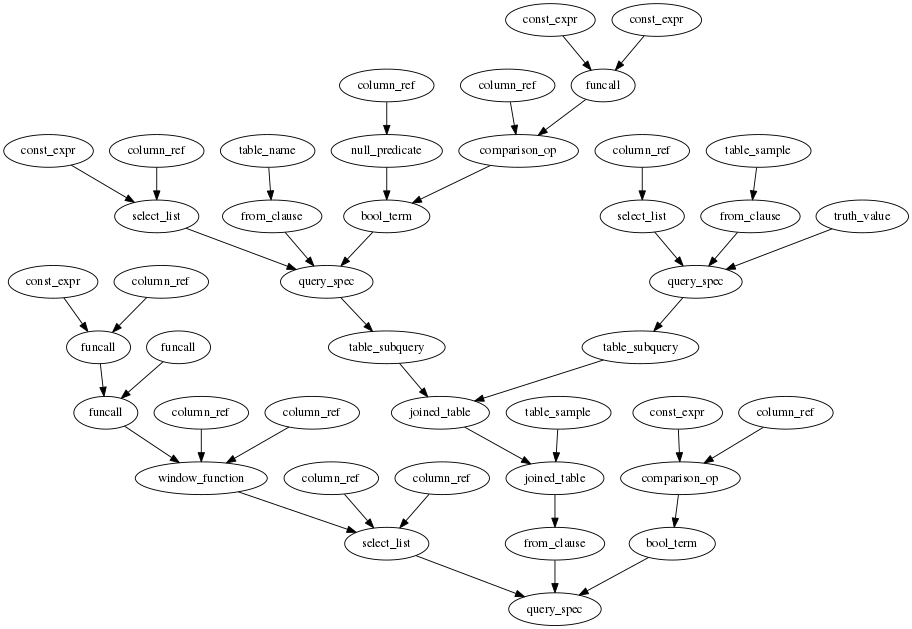