Monitor channel usage of neighboring routers / access points and get a desktop alert if your active channel is not optimal (has more than 1 user on it, other than you). Troubleshoot your wifi without lifting a finger! 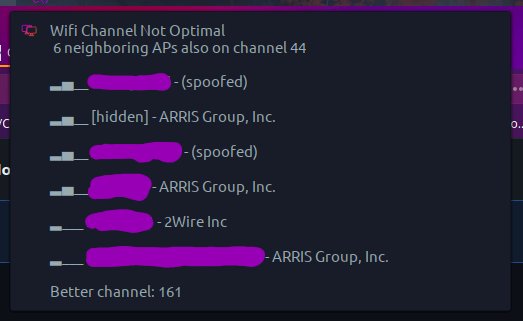 This script can be cloned and run manually, or added as a service that runs on a scheduled interval.

If you previously cloned this repo (prior to the version(s) mentioned, you'll have to add the new config variables to ~/.config/wifi-channel-watcher/config.conf in order for your existing config to be read by the script.

You can also simply delete the folder: ~/.config/wifi-channel-watcher and re-run the script to re-initialize setup (wipe existing config) to take effect, also.

All customizations are optional, in most cases, the script will work out of the box.